Making Friends of Classics. APA/SCS President Kathryn Gutzwiller has proposed a new category of membership in APA/SCS designed for educators and the interested public. This new category, with reduced dues, will offer benefits such as the association’s Outreach journal Amphora; the APA/SCS Newsletter; the opportunity to subscribe to the American Council of Learned Societies Humanities E-book Series; discounts on books from Oxford University Press and Blackwell Books; the regular member registration rate at the annual meeting; email announcements and online participation in APA/SCS blogs. Undergraduate Classics majors within two years of receiving their degrees can get one-year membership in Friends of Classics FREE. An organizing committee has been formed to spread the word and recruit Friends; if you would like more information, please write to me: mkgamel@ucsc.edu.

Outreach Prize 2013. The annual Outreach Prize recognizes outstanding projects or events by an APA/SCS member or members that make an aspect of classical antiquity available and attractive to an audience other than classics scholars or students in their courses.

The 2013 Prize was awarded to Robert Ketterer, Professor of Classics, Cinema, and Comparative Literature at the University of Iowa, for organizing the conference “Re-Creation: Musical Reception of Classical Antiquity” at UI in October 2011.  This international conference included presentations on many different forms of musical reception including opera, drama, musical theater, rap and heavy metal, as well as several performances including Peri’s opera Euridice and silent films accompanied by live piano. Professor Ketterer worked for over two years with a committee of others from diverse fields to ensure that this conference would have wide participation. Its presentations and performances reflected upon, and brilliantly illustrated, how the myths, literary texts, and aesthetic ideals of Greco-Roman antiquity have been received, portrayed, and re-conceptualized in musical works from the sixteenth through twenty-first centuries. Its sessions and events were aimed at and attracted a large, non-specialist, diversely constituted audience. The impressive diversity of the conference manifested itself demographically, too, since presenters and performers (and their audiences) ranged in their ages and professional stages from undergraduate to retiree.

If you know of APA/SCS members whose work reaches beyond our profession, nominate her/him/them for the Outreach Prize! Nominations, including self-nominations (which are strongly encouraged), should consist of a letter of nomination and three copies of a detailed description of the project or event to be considered, including three copies of any material product that may have resulted (such as a program, book or DVD).  Evidence of the impact of the nominee's work on diverse audiences (e.g., published reviews, testimonia from participants or beneficiaries, etc.) will greatly strengthen nominations. Deadline for nominations is September 2, 2014, at the APA/SCS Office, 220 S. 40th Street, Suite 201E, University of Pennsylvania, Philadelphia, PA 19104-3512. Nominations will remain in contention for a three-year period and will be judged by the Outreach Prize Committee.

A very special event will take place at APA/SCS New Orleans! Poet and adaptor Anne Carson has been invited by President Gutzwiller to direct a reading of Antigonick, her play based on Sophocles’ Antigone, on Thursday January 8 from 8-10 p.m. The Outreach Committee will work with the Local Committee to encourage teachers, students and all interested parties to attend Antigonick and other appropriate events, such as the performance of Wealth (see below), at the annual meeting. 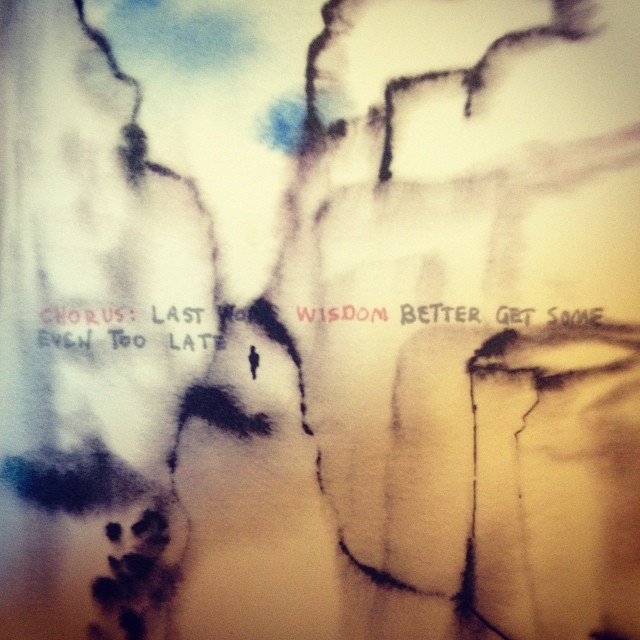 Activities of Committees in the Outreach Division.

The Committee on Ancient and Modern Performance (CAMP) has been working for several years developing policies and materials which demonstrate that performance is a form of scholarship and should be recognized as such. They are close to producing a document that demonstrates how to evaluate research in performance, which they will present to the APA /SCS Board of Directors with the request that the APA’s statement on research be modified accordingly.

At the APA annual meeting in Chicago 2014 CAMP presented a panel on Color in Ancient Drama in Performance organized by committee member Timothy Wutrich (Case Western Reserve University). CAMP also sponsored a staged reading of Rudens: The Musical! by Plautus (mostly) directed by Alison Futrell (University of Arizona) and John Given (East Carolina University) and performed by APA members.

Like previous CAMP-sponsored performances at the annual meeting, Rudens: The Musical! was lots of fun, but also more. As the program indicated, this annual production has become a platform for scholarly experimentation in the theatrical lab, which offers a real opportunity for the exploration of genre and presentation, the function and meaning of stage as a social and political node, for the practice of scholarly interaction and innovation.  Rudens: The Musical! aimed to explore the structural intersections between the Broadway musical and the Roman stage, asking how a Broadway singing voice may enhance and alter our understanding of Plautus’ comedy. Below, the directors, cast and accompanist of Rudens: The Musical! 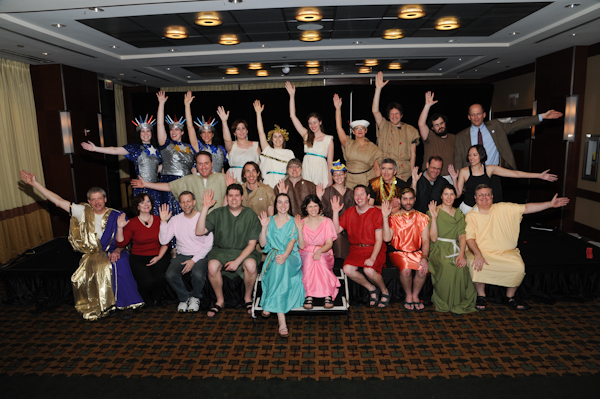 At the January 2015 annual meeting in New Orleans CAMP will sponsor a panel on Performance as Research, Performance as Pedagogy organized by T.H.M. Gellar-Goad (Wake Forest University). As the call for papers noted, “drama represents an intersection between literary and material culture, between dramatic text and theatrical artifacts.  Moreover performance itself, including contemporary (re)performance, is an essential component of research and teaching of the surviving scripts. The performance—both ancient and modern—of Greek and Roman drama is now a thriving field of scholarship. The panel organizer welcomes presentations of new research on ancient and modern performance as well as explorations of the new interpretive insights and student learning outcomes made possible uniquely through the staging and adaptation of Greek and Roman plays.  The panel will focus especially on the interrelationships among performance, interpretation, and teaching.  The act of staging or adapting an ancient play is a complex synthesis of close textual reading, material construction or reconstruction, thematic interpretation, reader-response analysis, and reception study.  The challenges of bringing a text to life always bring with them new insights into the nature or function of the plays, and students who undertake performance find themselves engaged with the texts and the cultural spaces they inhabit in ways that are not achievable through solitary reading or in-class discussion.”

At the New Orleans meeting CAMP will also present a staged reading of Aristophanes’ Wealth in a new translation by Karen Rosenbecker directed by Artemis Preeshl (both at Loyola University New Orleans). The writer and director collaborated on a production of this script, which reflects local issues, in January 2013. A Call for Actors for Wealth will be issued later this year. The performance will take place on Friday, January 9, 2015, 7-9 p.m.

At the annual meeting in Chicago the Committee on Classical Tradition and Reception sponsored a panel on Refracting the Great War: Classical Receptions in English Literature 1918-1929. At the 2015 New Orleans meeting COCTR will sponsor a panel on The Classics and Early Anthropology organized by Emily Varto (Dalhousie University). The call for papers stated “Ethnologists and ethnographers, like many other intellectuals in the 19th century, often had their initial and even advanced training in the classics. Classical scholarship, moreover, provided the budding field of anthropology with a wealth of collected data from foreign cultures, edited, translated, analyzed, and easily accessed in libraries and from the armchair. No other ‘other’ was arguably so well studied and documented. That anthropology and classics share an intellectual past is established and clear, but the nature of their interaction is neither uniform nor straightforward. How was classical material approached, adopted, and adapted, and through which authors and media? Why did ethnologists and ethnographers turn to the classics, besides availability and predominance? What did they do with the material? The panel, as envisaged, will aim to develop a nuanced picture of the early interaction between anthropology and the classics.”

The editors and editorial board of the APA/SCS  outreach publication Amphora are very pleased to announce the forthcoming publication of Amphora vol. 11 #1 (spring 2014).

Amphora is making itself yet more available to its readership. In coming weeks, in addition to its annual print appearance, Amphora will also publish its articles and reviews via the APA’s blog: http://apaclassics.org/apa-blog.

This improvement to the availability of Amphora means we will now be able to work with authors who might have a prospective contribution with digital elements – film or sound clips, perhaps, or images, or a desire for a discussion thread or feedback – as well as with contributors whose works benefit from a print treatment.

As always, Amphora editors welcome submissions, including submissions that take advantage of this new feature.  These are important days for outreach activity by our professional association, and the Amphora and Outreach committees believe this new format will help reach a yet-larger market. Amphora welcomes submissions from professional scholars and experts on topics dealing with the worlds of ancient Greece and Rome. Submissions should not only reflect sound scholarship but have wide appeal to our outreach audience. Submissions pass through blind peer review; they are typically about 1800 words in length for articles, and 1000 words in length for reviews. Additional detail on submissions appears on the last page of each Amphora issue as well: https://classicalstudies.org/publications-and-research/amphora.

Efforts have begun to establish two new national networks: one linking people actively engaged in various kinds of classics outreach activities, another along the lines of the Classical Reception Studies Network in Great Britain: http://www.open.ac.uk/arts/research/crsn/. More on this soon.

I welcome your comments and suggestions at any time.