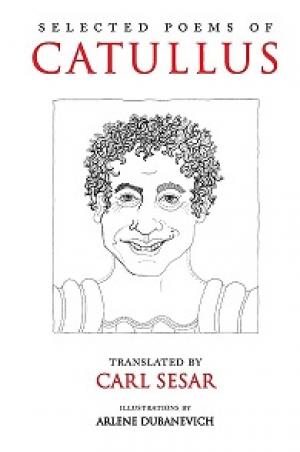 Since my original article (see below) about Carl Sesar’s (then out of print) Catullus, many people have asked me whether the book is back in print. The very good news is that it has indeed been available, with some revisions, from Sesar’s own One Shot Press since 2013. He would be happy to answer questions about this publication via email (carlsesar@gmail.com) or snail mail (Carl Sesar, One Shot Press, 7 Bardwell St., Florence, MA 01062).

In 1974, Selected Poems of Catullus, a translation by Carl Sesar unique for its ability to capture Catullus’ poetic voice in colloquial English, was published by Mason & Lipscomb, New York; it had Latin text on one side and English on the facing page, with line drawings by Arlene Dubanevich and an Afterword by David Konstan. Then suddenly the publisher went out of business. The book did not exactly disappear (it can be found in public libraries and many college and university libraries), but, unfortunately, it has been “lost” to much of the general public, as well as to many, if not most, professional classicists. Although it appeared to extremely positive critical acclaim in the popular press and among distinguished writers and translators, it was never reviewed in a classics journal, to the best of my knowledge. I hope that by calling attention to this half-forgotten translation, both classicists and the reading public, more generally, will return to reading it and a press will consider its republication.

The translator, Carl Sesar, was a classicist himself, early on. After graduating from the Bronx High School of Science in New York City, he earned a B.A. in Greek and Latin from the City College of New York in 1957 and was awarded the Claflin Gold Medal in Latin. Sesar might have continued on to a career in classics, but instead, he served in the U.S. Army from 1957 to 1961, during which time he studied Chinese at the Army Language School and did a tour of duty in Korea. After his military service he began graduate work at Columbia University with a National Education Act Language Fellowship, did research in Japan as a Fulbright scholar and Ford Foundation fellow, and received a Ph.D. in Chinese and Japanese at Columbia in 1971, with a dissertation on Nō Drama and Chinese Literature. Sesar founded and chaired the Department of Asian Languages and Literatures at Wesleyan University, where he taught from 1967 to 1975.

Translating Catullus was never far from his thoughts. Right after his military service Sesar began composing his first translations and reading selections from them at various open-mike venues in the East Village in New York City. Then, immersed in Chinese and Japanese studies, he set Catullus translations aside for about ten years. Returning to them earnestly post-Ph.D., Sesar did a broadcast of both his old and new versions of Catullus on radio station WBAI, which was very well received. These radio readings culminated in the publication of his 1974 volume.

Reviews of Sesar’s translation upon its publication were almost unanimously enthusiastic, and ongoing references to his work ever since have also been very positive. For a book that went out of print so quickly after publication, it continues to capture the interest and attention of scholars, publishers, and the reading public to a notable extent. Sesar is still invited to speak about his Catullus translations. In 2008, he addressed the Five College Faculty Seminar on Literary Translation at Smith College with a talk entitled, “Translating Catullus: A Retrospective, With Finishing Touches Added.”

Sesar has also spent a good deal of time thinking about and articulating issues of translation. This is clear from his engaging and enlightening piece, “Translating Takuboku,” in Currents in Japanese Culture: Translations and Transformations, (edited by Amy Vladeck Heinrich, Columbia University Press, 1997). While not about translating Catullus, this essay explains some of Sesar’s goals and practices in his translations, more generally. His description, for example, of the effect of the presence or absence of something as seemingly minor as a comma will affect my perception of punctuation choices in translations for a long time to come. Not all good translators write well about what they do, nor need they. Sesar does.

A brief view of the early reception of Selected Poems of Catullus shows the impact the book made upon publication. The dust jacket contained the following endorsements from two major literary figures:

Carl Sesar’s translations seem to me to have given Catullus a voice, a real human one, which is quite an achievement. (This from Richard Wilbur, Pulitzer Prize- winning author and former Poet Laureate of the United States.)

In addition, the extent to which this translation of a Latin poet was covered in the press is truly noteworthy. Among the newspapers and journals that published reviews were Saturday Review, Boston Sunday Globe, The Knickerbocker News Union-Star, Memphis Commercial Appeal, Buffalo Courier Express, Los Angeles Times, King Features Syndicate, New York Sunday Daily News, and (even) Screw Magazine. These reviews abound in praise for Sesar’s success at making Catullus, a poet from 2000 years ago, come alive for a contemporary audience. In the words of the Charleston News and Courier (Sept. 8, 1974), “Carl Sesar’s translations read as if Catullus might be an American writing today… [They] have the inevitability, the spontaneity and the immediacy of great poems.”

That Sesar wrote a translation with continuing appeal beyond the mid-1970’s, when it was published, is clear from its later reception. Prentice Hall, one of the most important textbook publishers in the United States, chose four of Sesar’s Catullus translations for their Literature, World Masterpieces, Annotated Teacher's Edition in the 1990’s. Then Pearson Education Inc., publishing as Pearson Prentice Hall, in 2003, contracted to renew their selection for ten years, until 2013. Meanwhile, in 1999 Asa Baber, longtime writer of the “Men” column in Playboy magazine, wrote an article devoted to Catullus, called “My Older Brother.” In it he writes: “I will use the esteemed translations of Carl Sesar, who captured Catullus better than anybody else....” More recently, a chapter on “Translating Catullus” by Elizabeth Vandiver in Blackwell’s, A Companion to Catullus (2007), edited by Marilyn Skinner, makes reference to Sesar’s translations. Still further, Eric Livingston’s “The Textuality of Pleasure,” in New Literary History 37.3 (2006), attests that, even though the book has gone out of print, its translations are still being read and enjoyed. More than 30 years after its publication the appeal of this particular translation is noted: “Sesar gives us a living Catullus, and we can begin to see why someone would want to read Catullus in the first place.” Finally, award-winning critic George Scialabba, was just quoted by James Marcus in Critical Mass, May 6, 2009, the blog of the National Book Critics Circle Board of Directors, as having chosen Sesar’s Catullus in answer to the question: which work in translation has had the most effect on your reading and writing?

One can hear a sampling of Sesar reading from his translations-in-progress at Wesleyan University, May 3, 1973, online through an archival recording. Sesar is introduced by David Konstan: http://www.demosnews.com/piece.php?115.1 .

To experience Sesar’s translations on the page, I include here one sample from his book:

The girl can’t be much on looks or brains

Flavius, or you’d tell Catullus all about her,

in fact, you’d never shut up about it.

Sure looks like you found a hot little bitch

though, maybe you’re ashamed to admit it,

but you aren’t sleeping nights by yourself,

don’t try to play dumb, the mattress says so

pillows are all over the place, bashed in flat,

and the whole bed creaks and wobbles so much

it practically walks and talks. Besides,

if you haven’t been fucking yourself silly

then why’s your ass dragging the way it is?

So whatever’s going on, for better or worse,

tell me. I’ll put all of that loving in a

sweet little poem, and make you both famous.

Sesar’s superb English translations capture in rare fashion the voice of Catullus: its wit, its outrageousness, its passion, and yes, its profanity. They offer a reader without Latin a chance to see why somebody might want to read Catullus, and show the reader who knows Latin how a translation can bring to life in English what lovers of the Latin language have enjoyed for so long.

END_OF_DOCUMENT_TOKEN_TO_BE_REPLACED
Calls for Papers
CFP: Annual Meeting for Postgraduates in the Reception of the Ancient World (AMPRAW