Troilus and Cressida and Tacitus

This play is one of Shakespeare’s oddest. The theme focuses upon the Trojan War, with constant interplay among the great figures of the Greeks and Trojans, in the seventh year of the war. The cause of the war, the Trojan prince Paris stealing the beauteous wife of

Shakespeare will pronounce harsh judgments upon the heroine of the play. Her behavior and character will be sharply contrasted with one of Tacitus’ prime female figures in the struggle between Romans and Germans. Both suffer the indignity of being handed over to the enemy by their fathers. But their response and behavior are vastly different.

The focus of the play is likewise upon a young man and woman, Troilus, a son of King Priam of Troy, and Cressida, hitherto unknown in the ancient legend of Troy. She plays a relatively small role in the drama; indeed, almost everything about her is quizzical. She is traded by her father, Calchas, a seer who went over to the Greeks at the beginning of the war, for the release of an important Trojan, Antenor, of whom the audience knows nothing. Her father’s name is barely mentioned. Why had he defected from the Trojan side to that of the Greeks? But Homer (Iliad 1.69) states that he had sailed with the Greeks in the attack upon Troy. How came he there? Had he foreseen the ultimate victory of Troy’s enemy? For seven years, although on Trojan soil, he has had no contact with his daughter. Cressida tells Pandarus, “I have forgot my father; I know no touch of consanguinity; No kin, no love, no blood, no soul, so near me as the sweet Troilus.” (IV.2.99-102) Why?

What significance did he have among the Greek aristocracy that he should be the one to propose that his daughter should be exchanged for a political figure? Did he know that Cressida had of late spent a substantial amount of time with Troilus, which ultimately led, it appears, to intercourse and expression of deepest devotion? And, when the time came for the trade, she left Troy with deep feelings of love and regret but these rapidly passed and she soon found a Greek lover. Shakespeare tells his audience nothing about Calchas the father. The audience in the Playhouse must have been bemused when this as yet unknown character begins the proceedings that have such impact upon his daughter. Could he have determined that he wanted to separate Cressida from the Trojan royal family at the point when she grew from child to woman?

From the text of the play we shall never know. But from Roman history there is a seeming parallel. The source of this narrative is the historian Tacitus, from whom Shakespeare had borrowed a decade earlier (see Notes and Queries 253 [June 2008] 202-205). Tacitus’ Latin is difficult, quite different from that of Cicero and Caesar. Even if the playwright had had difficulty with Tacitus’ language, aid was at hand, for the first English translations appeared in the 1590s, that of the Historiae 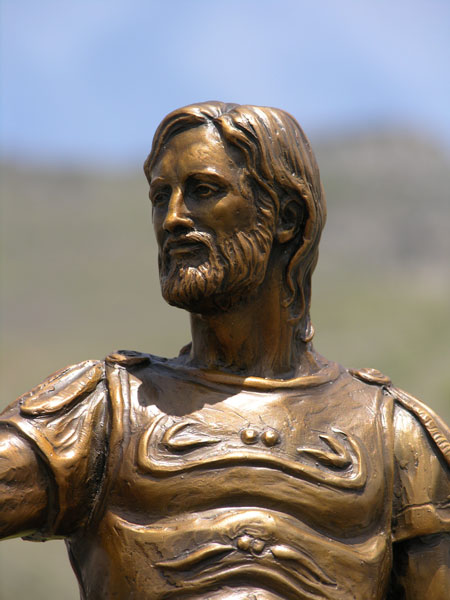 in 1591 by H. Savile, that of the Annales in 1598 by R. Grenewey. The subject of the comparison is the enmity between the Roman empire and the German tribe of the Cherusci, one of whose chieftains was Arminius.

Arminius was born about 17 BCE, served in the Roman army with great credit as a commander of auxiliary cavalry, learned to speak Latin, and received Roman citizenship. He was thereby an exemplar of the prime goal of Rome’s expansion, to gain the gradual allegiance of native tribes. In the year 9 CE, while ostensibly supporting the Roman commander Publius Quinctilius Varus, he led three legions with auxiliaries into a carefully planned ambush in the Teutoburg Forest and destroyed almost the entire army. Arminius was now honored by many of his fellow tribesmen, esteemed by allied tribes as well, and considered as the prime hope of the Germanic peoples for their independence and freedom. But there were many rivals, even among the Cherusci, who saw allegiance to Rome and alliance with it as the wave of the future. One such was Segestes, a much older man, who was Arminius’ prime rival for supreme influence among their fellow tribesmen. Arminius wished to marry his daughter; her father forbade the union, and Arminius subsequently stole her from her father’s camp and made her his own. She became pregnant in 14 or 15, when warfare had been resumed, with Rome’s forces under command of Germanicus. When Segestes’ influence began to weaken, he handed over his entire family and numerous followers to the protection of Germanicus. “There were included women of noble rank, among whom was Arminius’ wife, Segestes’ own daughter, who was much more of the mind of her husband than of her father; she was not overcome to the point of tears nor became a suppliant, with her hands pressed together across her bosom and gazing upon her swollen womb” (Annales 1.57.4, my translation). As Calchas had done with his daughter, Segestes did the same with his, separating her permanently from her great love.

Thusnelda and Arminius never saw each other again; Segestes may have considered this his ultimate triumph. Yet, as far as we know, the two remained loyal to each other. In 17 CE, Germanicus celebrated an extravagant triumph, in which Thusnelda was the prime captive on show. Segestes, now on the Roman side, gazed upon his daughter through the long humiliation of her public disgrace. (There is a vast painting of Thusnelda in the Triumphal Procession of Germanicus by Karl von Piloty [1869-73] in the Neue Pinakothek in Munich.)

Segestes had accomplished his ultimate purpose of separating daughter and lover/husband. The former was in Italy, the latter in Germany. What was Calchas’ purpose, if indeed there was one, from gaining possession of his daughter among the Greeks, cutting her off from the Trojans. Had he heard any talk of her relationship with Troilus, culminating in intercourse, of which he must have disapproved? And this with a son of Priam! What had led Calchas to desert from his native Troy to the enemy? Might the young people have been able to return to each other, and gain the happiness for which they yearned?

Shakespeare’s Act IV.2 makes it quite clear that the two have spent the night together. Troilus insists upon denial when Aeneas comes with Diomedes to carry Cressida off: “And my Lord Aeneas, we met by chance; you did not find me here.” (71-72) Cressida resists in the presence of Pandarus: “O, you gods divine! Make Cressid’s name the very crown of falsehood if ever she leave Troilus!” (102-104 )

But leave she does, escorted by Diomedes, with whom she rapidly falls in love. “O Cressid! O false Cressid! False, false, false! Let all untruths stand by thy stained name and they’ll seem glorious.” (187-89)

And therewith Cressida disappears from the play. All in all, it’s a modest part for a person whose name is part of the title. Nor does posterity think well of her. How different the reputation of Thusnelda. She never betrayed her husband; she never proved unworthy of him. How different Shakespeare’s heroine; when compared with Juliet, for example, how very mediocre.

Herbert W. Benario is Professor Emeritus of Classics at Emory University. A past president of CAMWS and the Vergilian Society, he occupies some of his retirement time by teaching classes, generally on some aspect of ancient Rome, in Emory’s Continuing Education program. He can be contacted at hwbenario@yahoo.com. He is the author of twelve books.