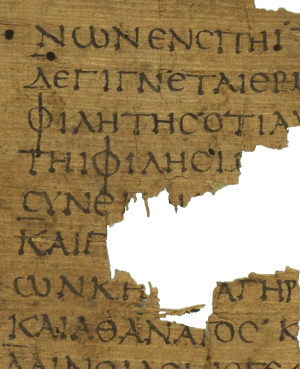 As the name suggests, the Digital Fragmenta Historicorum Graecorum (DFHG) is an online edition of Karl Müller’s Fragmenta Historicorum Graecorum (1841–1873). Müller’s work was a five-volume collection of fragmentary Greek historians, to which were added (in Latin) overviews of each author (with embedded testimonia), translation of fragments, and, often, brief commentary. Its online successor is elegantly presented, meticulously cross-referenced and admirably accessible— if somewhat quixotic. I will begin with an overview of what the FHG contains, describe the DFHG’s interface and features, and then offer some thoughts about the usefulness of the project in a context where Jacoby Online (recently reviewed in this forum by Matt Simonton) already exists.

Müller’s grand collection is notoriously idiosyncratic in its organization: Müller left out historians of Alexander, for example, but printed them instead as an appendix to his edition of Arrian (1846); ditto Ctesias, Castor, and Eratosthenes, which were added to Dindorf’s edition of Herodotus (1858). Conversely, various non-fragmentary works were included in FHG, most oddly pseudo-Apollodorus’ Bibliotheca, and a translation-less editio princeps of Michael Critobulus’ fifteenth-century history of the Ottoman conquest of the Eastern Roman Empire. In addition, despite a (mostly) chronological arrangement in volumes two through four according to ten “books” covering different stretches of 520 BC to AD 306, the first volume is an anthology of key authors (such as Ephorus) who are thereby pulled from the sequence. The two-part fifth volume, meanwhile, published two decades after the rest, offers supplementary material from codices examined in the interim, and (in part two) Victor Langlois’ French overview, translation, and commentary of Greek and Syrian historians preserved—in whole or part—only in Armenian.

DFHG, overseen by Monica Berti of the Alexander von Humboldt Chair of Digital Humanities at the University of Leipzig, offers a fully digitized and freely accessible edition of Müller’s text. (FHG, which Cambridge University Press reprinted in 2010 and made available on its paywalled website in 2011, was already accessible for free as scanned images from both the Internet Archive and Google Books.) The website’s design is sophisticated and its navigation intuitive, using the kind of independently loading multi-pane webpage familiar from applications like Google Maps (known as an Ajax page), and harnessed by Berti already for her magnificent Digital Athenaeus.

From a main page one first loads either an individual volume or the entire collection, and can then click on a “hamburger” (i.e. three-bar) icon at the top left to access a slide-in menu offering easy navigation through a linked reference tree that can expand or collapse to the levels of volume, book, author, work, and fragment.

Onscreen presentation of the texts themselves is divided horizontally by fragment, with each presented in five vertical columns that display, left to right:

There is also a search screen (called “the Digger”) that can be used to load specified authors or works directly. As you begin to type, a dropdown list of possible completions helpfully appears.

Another impressive feature involves comprehensive word searches. Clicking on any word while holding down the shift key produces a new window listing all places in the FHG where that lemma (as identified by the Morpheus parser) appears. At the top of this new search results page rests a conventional search box. Below that are the relevant Morpheus lemmata (linked to Perseus), and a Suda entry (linking to Suda Online). There follows the full context of each instance, with the form itself highlighted in a pleasant shade of yellowish-orange.

A few quibbles: Müller published addenda et corrigenda keyed by page, which one can access through the hamburger menu’s navigation tree. As these lack identifying author data, and thus will not show up in an author-specific Digger search, it would have been nice to see a link to them from the text that they modify. Berti has gone to great pains to link entries from the first volume’s indices to their referents. But the subsequent indices printed in volumes four and five are entirely absent.

The digitized text was created using OCR (optical character recognition) without final proofing. In a trial comparing page 150 of each printed volume against its digital counterpart, the first three averaged two serious Greek transcription errors and nine Latin ones, while each of the last two contained a multi-word Greek dittography (in the first case combining this with a haplography); moreover, in volume one an entire clause from the top of the next page had been omitted. Aware of such problems, the DFHG allows users to submit corrections for review, which seems a utopian solution.

So far, I have discussed the DFHG in a vacuum. But any version of FHG must always be considered in relation to its successor, Felix Jacoby’s monumental Die Fragmente der griechischen Historiker (FGrHist; also FGrH and FGH). Still incomplete, a digital edition with regular new supplements contributed by Jacoby’s successors exists behind a paywall as part of Jacoby Online from Brill. At this same portal Ian Worthington oversees two editions of Brill’s New Jacoby (BNJ 1 and 2), redone and expanded collections complete with English translations and commentary, both in progress.

As no version of Jacoby is yet finished, for some fragmentary historians Müller’s is still the current edition. An invaluable feature of DFHG is, accordingly, a searchable concordance between FHG and the three digital editions of Jacoby. An item-by-item crawl through the concordance yields 163 authors absent in any version of Jacoby, or around a quarter of the FHG’s total, a majority (59%) of uncertain era; although it also reveals that the FGrHist currently boasts 1,073 authors to the FHG’s 631. Since Jacoby assigned each fragmentary historian a number, a now authoritative system that the Jacoby Online has maintained and expanded, the concordance can also help one quickly determine to what, if any, Jacoby number(s) a historian in Müller corresponds. Cross-references, with links to a scan in Google Books, are thoughtfully provided for Jacoby Online authors who have corresponding entries in Müller’s other editions of fragmentary historians or his two-volume Geographi Graeci minores (1855–61, collecting excerpts, rather than fragments).

A key question that the DFHG prompts is what audience Berti and her team envision for it. The site makes much of the access it offers to its data and coding for future developers through GitHub, but Müller’s text is so outmoded and idiosyncratic that the value of this dataset needs greater elucidation. Nor does a website that boasts translations only in Latin open up inaccessible resources to a wider public. Given both the peculiar nature of Müller’s collection and the byzantine bureaucracy that has developed for organizing fragmentary Greek historians, even a trained Classicist will need a specialized background or a good day of outside research to figure out how to judge any information obtained through DFHG. The expert, meanwhile, will be glad to escape having to navigate the FHG’s printed indices to locate particular authors and deeply thankful for the concordance with Jacoby. But any search results will need laborious comparison with those from Jacoby Online, while texts will require checking against the print edition for transcription errors.

Berti’s Digital Athenaeus, with its inventive tools for analyzing the range of authors cited in the Deipnosophistae, showed how a digital edition could be much more than simply a searchable transcript, and in the process suggested new avenues to explore with its data. DFHG, by contrast, although an impressive achievement, is an enigmatic and taciturn resource.

Header Image: A 2nd c. CE papyrus containing a fragment of Atlantis by Hellanicus of Lesbos (P.Oxy. VIII, 1084) in the Public Domain via Wikimedia.

Richard Fernando Buxton is an Assistant Professor of Classics at Colorado College. He received his PhD in Classics from the University of Washington and has previously taught at the College of Charleston and the University of Texas at Austin. His research focuses on the political and economic history of Classical Athens (fifth- to fourth-century BC) as it appears in the era's literature, particularly in the work of the philosopher-historian Xenophon, a disciple of Socrates who was also a famous mercenary general. In 2016, Richard edited and contributed to a special volume of the journal Histos on Xenophon’s theory of the ideal leader, and wrote a chapter on this subject for the Cambridge Companion to Xenophon. He has previously published articles on Irony in Herodotus (Greek, Roman, Byzantine Studies 2012) and Athenian coins circulating in Persian territory (American Journal of Numismatics 2009). Current and forthcoming articles in Illinois Classical Studies (2017) and a supplementary volume of Trends in Classics (2018) cover, respectively, Xenophon’s depictions of civil wars within Greek city-states in his historical work the Hellenica, and the different ways in which Xenophon and the contemporary orator Isocrates conceptualized such conflicts (known in Greek, confusingly for us, as stasis).

02/26/2021
Blog: Classics Everywhere: Fostering Interaction and Engagement in School-Aged Children
The Classics Everywhere initiative, launched by the SCS in 2019, supports projects that seek to engage communities...
02/22/2021
Blog: An Interview with Suzanne Lye, Recipient of the WCC 2020–2021 Leadership Award
In Part 2 of our guest series for the SCS Blog, the Women’s Classical Caucus (WCC) invites you to celebrate the...
02/18/2021
Blog: Impeachment and Republican Rome
If there’s one thing in this divided America that we can all agree on, it’s that former president Donald J. Trump’...
02/10/2021
Blog: An interview with the AAACC, Recipient of the WCC 2020-2021 Professional Equity Award
The Women’s Classical Caucus (WCC) invites you to celebrate the winners of its 2020–2021 Public Scholarship and...
02/01/2021
Blog: Alan Cameron's Papers at Columbia
The papers of Alan Cameron (1938–2017) have been donated to the Rare Book and Manuscript Library of Columbia...
END_OF_DOCUMENT_TOKEN_TO_BE_REPLACED

Academic freedom and tenure are of fundamental importance, indeed the basis u