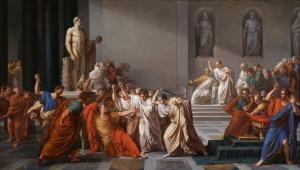 Historical fiction based in the ancient world has long been a fruitful way to encourage the interest of non-specialists in the ancient world. These novels can also be used profitably to improve classroom pedagogy. I regularly assign a work of historical fiction in my online Intro to Ancient Rome course.  This summer, I opted for Steven Saylor’s most recent addition to his Gordianus series, The Throne of Caesar. My students in the summer are nearly all STEM majors who are looking to complete a core requirement, often while simultaneously working full-time. I need to select novels that are readable, follow Roman history accurately, and add dimension to the world and characters that they are studying. Ideally, the novel will also encourage the students to think about some aspect of Roman history from a new perspective.  For instance, Saylor’s Catalina’s Riddle tells the story of the Catilinarian conspiracy from the perspective of Catiline rather than Cicero and reminds students to pay close attention to Cicero’s presentation of the events. Robert Harris’s Imperium invites the reader into Cicero’s life at the very start of his career, to learn how Cicero became Cicero.

Saylor’s The Throne of Caesar, which is organized by days and covers the two weeks from 10-23 March, 44 BCE, works very well for my purposes. It focuses entirely on Caesar’s situation in Rome and the immediate aftermath of his death, with an added and fascinating twist on the ancient historical report that the poet Cinna was mistakenly killed in the scrum after Caesar’s funeral. Saylor’s novel helps us avoid the temptation to rush over Caesar’s death and get to its larger significance for the history of Rome. Similarly, he reminds us not to jump ahead to Octavian’s arrival in Rome, to Antony’s conflict with Decimus Brutus and the Roman Senate at Mutina; and, ultimately, to the events that led to the formation of the 2nd Triumvirate in late winter of 43 BCE.

It is difficult to imagine the shock and turmoil that enveloped Rome and her citizens on the Ides of March, 44 BCE. For all that ancient and modern historians treat Caesar’s murder as a fated inevitability following his assumption of a range of ever more extravagant and unprecedented honors and titles, including that of Dictator Perpetuus, it is helpful to remember that the assassination initially was greeted by shock, fear, and renewed anxiety over another contentious struggle for power — even by those like Cicero who quickly came to embrace the assassins’ cause and to hope for a return to something like a pre-First Triumvirate version of the Republic.

Josiah Osgood’s 2006 Caesar’s Legacy: Civil War and the Emergence of the Roman Empire provides a nuanced account of the fallout of Caesar’s death, the formation of the 2nd Triumvirate, and Octavian’s emergence as sole ruler of the Roman Empire. His first chapter, drawing on the surviving ancient sources, offers an elegant account of Caesar’s funeral and the mood in Rome. Barry Strauss’s 2015 The Death of Caesar likewise offers a close look at the characters involved in Caesar’s murder, to flesh out the motives especially of Brutus and Decimus Brutus in wanting Caesar gone; and the role of Caesar’s veterans in preventing the Senate from reclaiming power. Returning in particular to Osgood’s narrative and taking a cue from Steven Saylor’s newly published mystery, The Throne of Caesar, I want to talk about that brief moment after Caesar’s death when it still seemed possible to believe that the authority of the Senate might be restored and yet another devastating civil war averted.

Saylor’s novel encourages the reader, whether student or professional scholar, to linger on the hours and few days after Caesar’s murder, before Octavian was a factor and when it seemed possible — though perhaps not probable — that the violence of Caesar’s death might be contained. Saylor’s novel recounts the significant efforts made by both the supporters of Caesar and the supporters of the assassins to negotiate a détente.

It is worth noting that Caesar’s death did not create a power vacuum. While Antony and other supporters of Caesar were intent on preserving Caesar’s legacy and, thereby, their own power, the so-called vacuum was filled by the Roman Senate as a whole. As the assassins proclaimed to the Roman people in the hours after the murder, they had liberated Rome from a tyrant. Like the original Brutus, this latter-day Brutus had restored the Republic and, specifically, restored the Senate to its traditional role. Cicero’s letters witness to a general mood of uncertainty about exactly how much authority and power the Senate might hope to reclaim from influential figures like Antony, but also underscore the extent to which Cicero operates under the assumption that the Senate has banished the threat of tyranny.

Photo of the later Curia Julia in the Roman Forum, as reconstructed by Diocletian in the 3rd century CE and then later added onto by Theodoric. In the early middle ages, it was turned into a consecrated Church, which preserved the structure quite well until Mussolini rebuilt it in the early 20th century as a symbol of his Roman renaissance. Photo by Sarah E. Bond.

Immediately following their murder of Caesar and in the days that followed, the assassins and their supporters delivered public speeches designed to calm the Roman populace. Great attention was given to persuading the Roman people that Caesar’s murder was just, both to prevent civil unrest and also to pressure the Caesarians to negotiate an arrangement that would restore senatorial authority. In these first hours and days, there is no clear evidence that Antony is merely biding his time until he could make his move to install himself as Caesar’s successor as dictator vel sim. In fact, Antony makes a point of abolishing the office altogether. Everything Antony does, from agreeing to pardon the assassins to pressing for the ratification of Caesar’s Acta and arranging for the reading of Caesar’s will and a public funeral, seems to be aimed at consolidating his own position, but within the limits of Roman law and the traditional functions of the Senate. Ancient sources emphasize the interest by both sides in abiding by the law. Indeed, we are told that this is why Lepidus opts not to use his troops to punish the assassins in Rome — an act that would not only escalate an already challenging situation but would be illegal under Roman law.

Together with Calpurnia and others, Antony guards Caesar’s legacy and ensures that the dead Caesar is not treated like a common criminal but rather, a good if flawed Roman citizen. He also ensures that these immediate negotiations satisfy all constituencies, including those on both sides who were promised magistracies and governorships. Notably, he does not appear to challenge the basic assumption that there will be a return to some version of Republic governance.

From hindsight, we understand that the Senate was too substantially weakened by 44 BCE; and that this peace accord had little chance of enduring. As an institution, the Roman senate was never designed to fight for power. It was an advisory body that relied on concepts like auctoritas, mos maiorum and concordia to govern. It had no access to the military power required to compete with charismatic generals who challenged its authority, decisions and status. The Senate’s decision (led by Cicero) to support the young Octavian against Antony at Mutina was merely the final nail in the proverbial coffin.

The brilliance of Saylor’s novel is the way in which he presents a Rome in which, in the immediate aftermath of Caesar’s assassination, there remained a glimmer of hope that the Republic might be restored, that civil wars might be averted. Saylor reminds his readers that, to truly understand the complexity of these events, it is essential not to jump to the end of the story. This makes the novel an especially powerful tool for teaching students who don’t know what happens next. They aren’t forced to consume a narrative that takes for granted that Caesar’s death will precipitate the end of the Republic; or that reads Caesar’s assassination in the context of the later civil wars. Students — and even professional scholars — can imagine the possibility of other outcomes. Indeed, as my students easily observed, all the actions of the Caesarians as well as the Optimates in those first days after Caesar’s death suggest a common focus on crisis management, an attempt to limit the damage and avoid civil unrest.

Dr. Jen Ebbeler is an Associate Professor of Classics at UT Austin. She is a Romanist who works primarily on the Roman Empire, including Late Antiquity. She also knows a lot about education technology, including instructional design and online pedagogy. Her first book, Disciplining Christians, was a study of Augustine's Correspondence. She is currently working on a co-authored book (with Dr. Stephanie Cobb) on the reception of Perpetua in Late Antiquity as well as a monograph on the "decline and fall" of the Roman Senate. Someday, she will write a book on online course creation and intellectual property. She teaches widely in Latin Literature and Roman history. In 2015, she completed a 3 year project of designing, building, and implementing an online version of her large enrollment Introduction to Ancient Rome course. This online course has since been taught to hundreds of UT Austin students and is a model for building an asynchronous, non-lecture based online course designed to be taught at scale. In her spare time, she enjoys hiking the mountains of Utah, fostering kittens and cats, and keeping her electrolytes in balance.

04/13/2022
Blog: Two Years Later: “Classics” after Coronavirus?
In an April 2020 post for Eidolon, I gathered predictions on “classics after coronavirus.” Two years later, it’s...
04/08/2022
Blog: Ancient Worlds, Modern Communities: Increasing Accessibility for the Study of the Ancient World
The Ancient Worlds, Modern Communities initiative (AnWoMoCo), launched by the SCS in 2019 as the Classics...
03/21/2022
Blog: I Love You, I Hate You: A Student’s Perspective on Learning Latin
I have always enjoyed Latin class because it felt like a puzzle, much like math. Find the verb, find the noun that...
03/18/2022
Blog: Power to Punish and Authority to Forgive: Imperial State and Imprisonment in 4th-Century Antioch
Research ideas often develop out of chance encounters or unplanned circumstances. My dissertation project was born...
03/14/2022
Blog: Sampling Epic in Kendrick Lamar’s “Mortal Man”
Because it’s spirits, we ain’t even really rappin’ We just letting our dead homies tell stories for us....
END_OF_DOCUMENT_TOKEN_TO_BE_REPLACED