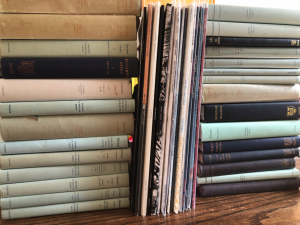 First, a few caveats. I’m leaving out obvious works like Purcell’s “Dido and Aeneas”, Iron Maiden’s “Flight of Icarus”, or my son’s favorite “Troy Song.” Some are as fleeting as a title, others are more intrinsic to the song itself whether as subject-matter, imagery, or refrain. While I’ve had some success utilizing these songs in teaching (e.g. the video for “Paradise” features the conjugation of the verb amare, and the Mountain Goats’ “Song for Cleomenes” provides a fun precis of Cicero’s Verrines), others I’ve just enjoyed for their ties to the classical world. I think other songs can be useful, even without overt classical references: the Magnetic Fields’ 69 Love Songs seems to encapsulate Latin Love Elegy better than most basic treatments of the subject, and the self-conscious referentiality of hip hop artists like Aesop Rock and Sage Francis can effectively model allusion and intertextuality, even if they do not mention Vergil and Callimachus.

Lest you think this was all the result of procrastination, consider that the relationship between music and classical texts is booming. There’s the possibility for real work to be done with this material (if you get inspired, read this article, or this one, and go to this conference), and swell work has been done already covering connections between heavy metal and the Classics as well as Bob Dylan and the Classics. I’ve made the playlist available on Spotify (SCS_Classics Playlist 2018), feel free to leave your suggestions for additional songs that deal with the ancient world and any other comments on the playlist below on my Twitter Feed (@OberlinLatin).

If you care to listen to these tunes (and perhaps add some of your own), visit the Spotify Playlist at: SCS_Classics Playlist 2018.

Header Image: Photo by Christopher Trinacty and used by permission.

01/15/2021
Blog: Classical Architecture and the Attack on the Capitol
On December 21, 2020, which now seems like eons ago, Donald Trump issued the “Executive Order on Promoting...
01/12/2021
Blog: A committee, a coup, a Cruz, and a Catiline
Against the backdrop of the United States’ first non-peaceful transition of power, there is a much smaller-scale...
12/21/2020
Blog: Stultitiis et rebus infestis: Petition for UVM to Surrender its Motto
In memoriam Stellae Q. Decimae Lucerna ardens extinguitur   In March 2019 the Classics Department of...
12/18/2020
Blog: Contingent Faculty Series: An Interview with Joshua Nudell
Our third interview in the Contingent Faculty Series is a digital sit-down between Salvador Bartera...
12/04/2020
Blog: Come and Take It: The End of Eidolon
Late in the afternoon on November 5, 2020 — close to 24 hours after polls across the country had closed for the...
END_OF_DOCUMENT_TOKEN_TO_BE_REPLACED