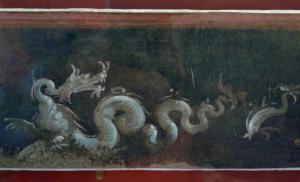 Together with objects such as Greek and Etruscan pottery and terracottas, and some Egyptian mummies (including a rare unopened one), the collection was the biggest for Antiquity in Latin America, but not many people were aware of it. The museum, home also to extensive collections in ethnography, paleontology, zoology and geology, happened to have less visitors last year than the number of privileged Brazilians who visited the Louvre. When I asked my History undergrads in our first class whether they had ever visited the National Museum, they all said “no”.

In class on that Thursday, I had to look at them again trying not to say an inevitable “it’s all gone forever now”, but there was no need. We were all mourning together, and trying to understand where we would go from now on. Watching the fire on TV, on Sunday evening, we all had similar reactions. For me, it felt like watching the cremation of a very dear someone, but also a shocking, screaming metaphor of the failure of a country, of the recognition of the importance of what we do as historians and humanists, of the building and maintenance of a national, collective memory.

There are misconceptions about state funding in Brazil that should be addressed. On social media, the comments I’ve read from people outside Brazil quite often mentioned the paradox of a huge amount of money spent in the World Cup and the Olympic Games against the lack of funding available for a minimum water sprinkler in the museum’s rooms. For us here, this was no wonder. These mega events had little to do with Brazilian reality, no matter what the authorities and the news sources tried to sell. Many urban improvements that were promised for Rio because of the Olympics are still under construction, with no close inauguration in sight. This is not only passive acceptance of corruption. There is a general feeling that “it’s the way things are” and that the infrastructure is bad (there was no water in the hydrants outside the museum). Because it has always been insufficient, the museum has no adequate budget. No government ever thought this was important enough.

Deepening the metaphor is the political situation in Brazil. When I was in the US last year, many people I talked to didn’t have much information on Brazilian affairs (or, for that matter, everywhere in Latin America), mostly due to the fact that American media hardly provides this sort of news. But here, just like in so many places around the world, extreme conservatives are shouting louder and louder. The last three years witnessed a white coup that reversed measures taken in the last decade to lessen social inequality, and – particularly for our topic – to facilitate entrance in universities for the underprivileged, which are mostly of African descent.

Lower levels of formal education are still pervasive in Brazilian society, and now the education gap is growing again. Right now we are in our presidential campaign, and we have our very own Donald Trump in the figure of a former army captain notorious for his hate speech, Jair Bolsonaro. Conservatives have attacked the dean of the university responsible for the museum, because he’s affiliated with a left-wing party, and spreaded some fake news that the museum had turned down a $80 million offer from the World Bank because the admins rejected the counterpart of having to handle it to a private foundation.

This is part of an ongoing push towards privatizing higher education, research and culture in the country, cutting budgets to the point of rendering public institutions impracticable. In the last decade, fires caused by lack of proper maintenance destroyed the Museum of Portuguese Language, an unique initiative in heritage management, the National Film Library, Butantan Institute (one of the most important research centers on reptiles in the world), the Latin America Memorial and the Cultura Artística concert hall. All of these were in São Paulo state, governed by the party that most pushed forward privatization initiatives. Other institutions, such as the African Heritage Museum (Museu Afro Brasil), Goeldi Museum, which is the oldest research institution on the Amazon, and the National Archives are similarly underfunded and at risk of destruction or abandonment.

When it came to what to say to my students last Thursday, I couldn’t just talk about destruction and loss. The six top graduate programs that were part of the museum had their labs and libraries destroyed, but the researchers are still there. We may not have the frescoes from the Temple of Isis in Pompeii anymore, but along with countless pictures, records, and now 3D models, we have many people still eager to study and write about the memory of what we had. We may not have an old academic tradition or huge libraries in Brazil, but we also have something to say about the past, both ours and the history of the world.

We have an essential role – I’d even say duty - to explain the importance of the museum(s), of the collections and the knowledge we can produce to the very people who said the place wasn’t so important to them, the people who never cared to understand in what way “Luzia”, the oldest human fossil in the Americas, or the throne of the African kingdom of Dahomey had any connection to their lives. In a very strong way, the metaphor that we saw in the fire, in the painful close-ups that the TV showed of the shelves burning and falling down inside the windows, is a reminder of the utmost necessity that we as academics, intellectuals, researchers must keep on with our work in research and particularly in teaching.

Header Image: Detail of a fresco from the Temple of Isis, representing a sea dragon and a dolphin, 1st century AD (Fourth Style), Museu Nacional, Brazil (Image via Wikimedia under a CC-BY-SA 4.0).

Juliana Bastos Marques is Associate Professor of Ancient History at Federal University of Rio de Janeiro State, in Brazil. Her BA, MA and PhD are from University of São Paulo, where she studied Latin historiography, in particular Tacitus. Her current research interests focus on authority in ancient historiography through approaches based on contemporary theoretical issues on authorship. She was a Fulbright Fellow at Florida State University in 2017 and is currently Newton Advanced Fellow at Newcastle University. She can be contacted at juliana.marques@unirio.br.

01/15/2021
Blog: Classical Architecture and the Attack on the Capitol
On December 21, 2020, which now seems like eons ago, Donald Trump issued the “Executive Order on Promoting...
01/12/2021
Blog: A committee, a coup, a Cruz, and a Catiline
Against the backdrop of the United States’ first non-peaceful transition of power, there is a much smaller-scale...
12/21/2020
Blog: Stultitiis et rebus infestis: Petition for UVM to Surrender its Motto
In memoriam Stellae Q. Decimae Lucerna ardens extinguitur   In March 2019 the Classics Department of...
12/18/2020
Blog: Contingent Faculty Series: An Interview with Joshua Nudell
Our third interview in the Contingent Faculty Series is a digital sit-down between Salvador Bartera...
12/04/2020
Blog: Come and Take It: The End of Eidolon
Late in the afternoon on November 5, 2020 — close to 24 hours after polls across the country had closed for the...
END_OF_DOCUMENT_TOKEN_TO_BE_REPLACED