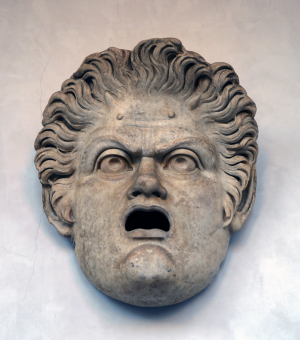 By Curtis Dozier and Christopher B. Polt

One of the best ways to build fluency in a language is to listen to that language being spoken at a comprehensible level of complexity. This is no less true for Latin than for any other language, but until recently the options for listening to Latin being spoken were limited, especially for those unable to travel to the various spoken-Latin colloquia around the country (e.g., the Paideia Institute’s “Living Latin,” Dickinson College’s Conventiculum Dickinsoniense, UMass-Boston’s Conventiculum Bostoniense). Podcasting has changed that. There now exists a full lineup of podcasts in Latin that allow anyone interested in developing an ability to hear, and ultimately speak, Latin to practice whenever is convenient for them, with new content being added all the time.  With hosts that hail from many different countries, these podcasts hearken back to the time when Latin was a language of international exchange.

Weekly podcast featuring conversations in Latin between several hosts: Active Latin guru Justin Slocum-Bailey, Gus Grissomm, Jason Slanga, and now in the second season, Catherine Reed. Topics of conversation range widely, from everyday activities such as exercise or what to do on summer vacation, to discussions of the content of ancient Latin texts such as Pliny’s or Cicero’s letters.

Conversations between three friends—Abigail, Lída, and Anna—who live thousands of miles apart in Prague, Granada, and Mexico City but who are bound together by speaking Latin (and sometimes ancient Greek). The focus is pointedly contemporary and colloquial (discussions of the differences between lingua Hispanica in Spain and Mexico, trips to Oxford and Rome, and so forth.

A contemporary and global news bulletin produced weekly by the Finnish Broadcasting Company since 1989, Nuntii Latini is one of the oldest Latin-only audio programs in the world. Episodes run ca. 5 minutes and the website includes transcripts for each.

A weekly podcast recorded by second-year Latin students at Western Washington University that follows a format similar to the Finnish Nuntii Latini (i.e., 5-minute episodes reporting on contemporary events with transcripts on the website).

Curtis Dozier teaches Greek and Roman Studies at Vassar College. He is the producer and host of The Mirror of Antiquity podcast, and the director of Pharos: Doing Justice to the Classics. (Photo Credit: ©Walter Garschagen/Vassar College)

Header Image: Sculpture of a Roman theater mask in Baths of Diocletian, Rome (Image via Wikimedia under a CC-BY-SA 4.0).

Curtis Dozier teaches Greek and Roman Studies at Vassar College. He is the producer and host of The Mirror of Antiquity podcast, and the director of Pharos: Doing Justice to the Classics. (Photo Credit: ©Walter Garschagen/Vassar College).

05/22/2020
Review: A Digital Glossary of Arabic and Latin Terms
The Arabic and Latin Glossary (hereafter al-gloss) is a free, online dictionary of the vocabulary used by medieval...
05/15/2020
Blog: What is the Worth of a Masters in Classics? Some Advice on Terminal MAs
Have you ever thought about a terminal MA in Classics? I have to confess, I hadn’t before coming to teach at...
05/08/2020
Blog: Women in Classics: Barbara Gold
Barbara K. Gold is Edward North Professor of Classics at Hamilton College, Emerita. She received her B.A. at the...
05/01/2020
Blog: Evaluating Classics in Social Media from Twitter to Facebook and Beyond
How has the field of Classics changed with the growth of digital writing and social media? How can this writing...
04/24/2020
Blog: Classics Everywhere: Sustaining Classics in the time of COVID-19
The Classics Everywhere initiative, launched by the SCS in 2019, supports projects that seek to engage communities...
END_OF_DOCUMENT_TOKEN_TO_BE_REPLACED

END_OF_DOCUMENT_TOKEN_TO_BE_REPLACED
Classics in the News
NEH Grants for Classically Themed Projects (May, 2020)