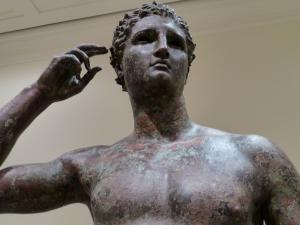 The documentary presents different narratives along with different bodies, focusing on the journey of the Paralympics as a cultural and political sporting event whose importance had to be established next to the more commonly popular Olympic games. As this article will explore, through the use of marble and references to the classical past, the directors of Rising Phoenix aim to create an alternative history, one where the Paralympics are cast in history from ancient times, and it is the outside world creating and causing cracks on otherwise intact bodies, disabled and yet cast in marble like ancient heroes and victorious athletes. 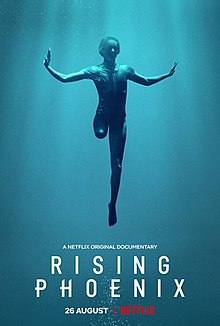 After displaying the successes of Beijing and London, the narration of the film focuses on the case of Rio 2016, where due to a lack of money and organization the Paralympics were only officially confirmed two weeks before the event. Rio was not an the only case where the Paralympics were at risk: the documentary in fact also points out and denounces the occasions where the Paralympics did not happen at all, or the athletes were mistreated or misrepresented. Amongst these feature the games at Atlanta, Moscow, and Athens, all for different reasons, be it lack of spectators or a complete refusal, in Russia’s case, to host the games.  To symbolically depict the difficult journey of the Paralympians and the Paralympics, directors Ian Bonhôte and Peter Ettedgui often cut from sports events or interviews footage in order to close up on marble casts of the athlete protagonists of Rising Phoenix.

All the athletes are cast in marble just like a classical statue: the difficulties in organizing the Paralympics are depicted on their marble bodies through a slow cracking and breaking of the marble and of statues. This symbolizes the falling apart of years of hard work, both on the committee and on the athlete’s part. The use of casts to do so, and thus of a type of imagery which immediately brings viewers back to the ancient world, wherein both heroes and victorious athletes were honored with statues in their likeness.

Rising Phoenix sometimes falls into stereotypical casting, admittedly through its very own topic and cast, focused on an extraordinary event like the Paralympics and specifically on its winning athletes. The LA Times comments on the film’s tendency to cast ‘the athletes as gods whose speed, strength and finesse shatter preconceptions the world sometimes foists upon them.’[1] Similarly, the NY Times also affirms how the documentary is stacked with ‘hero-worship’.[2] The title and Bebe Vio’s opening words when talking about her experience in the scouts conjures a common trope about the ‘super cripple’: ‘My name was the Rising Phoenix, because the phoenix can live and die and burn and live again.’[3] 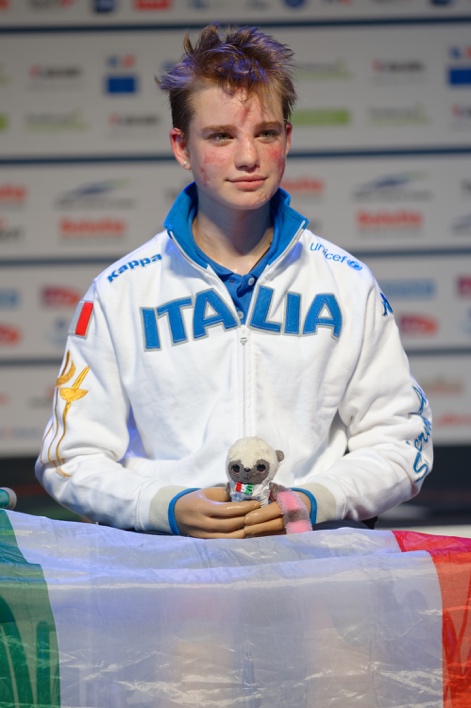 The ‘super cripple’ narrative displays ‘a triumph over tragedy’ which ‘conveniently excludes the central point that disability is a social issue’ and further ‘that the experiences of “ordinary” people - disabled or otherwise - are unimportant and irrelevant.’[4] Regardless, I would argue that the classical imagery used in the film instead takes away from such stereotypes, creating an alternative narrative where disability is indeed understood as real-life issue while also taking into account its social and political implications in the present.

In Rising Phoenix, in fact, going back to the classical past is a way to move away from current misconceptions, re-instituting a history where a different ‘way of thinking and moving’ is present, opening up ‘the possibility of situating disability as a strength, as fit for a world that is also cunning, changing, and changeable’.[5] In this way, the classical past is used to re-affirm not the figure of the super-cripple by way of heroization or deification of the athletes, but is instead employed to import a possibility of acceptance, normalcy, and then praise into the present.

The use the ancient past in order to read disability in a way that differs from our own modern perception and prejudice is explained in Jay Dolmage’s seminal work Disability Rhetoric (2013), where he thoroughly analyzes the figure of the Greek god Hephaestus and his significance. Hephaestus, god of metallurgy and fire, is in fact often depicted in myth with as disabled, due to his limp. This is of course significant for a god, whose bodies, according to Garland, were depicted to satisfy what he defines as the Greek ‘penchant for physical perfection.’[6] According to Dolmage, it is because of this that Hephaestus, as a godly figure, provides ‘an image of disability as valued by ancient society.’[7] Despite recognizing other instances in which disability is taken as a point of laughter and humor, or even disgust, in the ancient world, Dolmage’s reading of Hephaestus allows for a complete re-thinking of how disability was perceived. Noting that ‘the worlds we create partially construct disability,’ Dolmage encourages his readers to ‘return to Ancient Greece, guided by Hephaestus […] and to revise our perspective, addressing the exclusions we have applied over time.’[8] 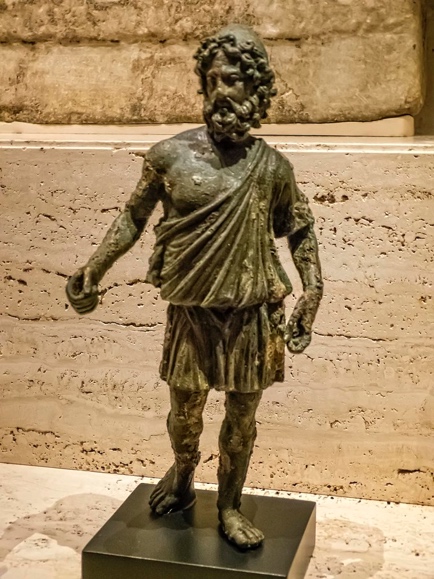 Rising Phoenix’s use of the marble cast seems to do precisely that, keeping in mind that ‘because we are people with bodies and limbs, we are subject to a certain permanence biologique that connects us to people from the past.’[9] The statues of the Paralympic athletes stand proud: it is, as noted by Dalmage, the perspective of the outside world that damages and breaks them.

By showing the fractures in the marble cross-edited with the story of particular failures in the history of the Paralympics at the Olympic sites of Atlanta, Athens, Moscow, directors Bonhôte and Ettedgui visually argue that the statues are not broken or damaged because the bodies of the Paralympic athletes differ from those of the Olympic ones, but instead show how it is the outside perception of disability that impacts on how the disabled body is seen and constructed. This is noted by the directors themselves, who on Twitter expressed how they ‘used the cracks in the statues to illustrate the fragility of the Paralympics, stating that ‘the movement has had to overcome adversity many times throughout its history’ and that ‘we all have a role to play in protecting and promoting its values.’[10] The bodies of the statues having a missing limb, then, does not signify anything more than the body of its owner: instead, it is the outside perception which becomes physically damaging to the casts, even when made of marble.

Through this narrative starting from an ancient past which celebrates and honors athletes with disability, Rising Phoenix temporarily moves away from the myth of the super-cripple, establishing itself in a time of the past where all athletes were celebrated and regarded with honor and respect. Similarly, it also recognizes the current social and political differences between what are considered able and disabled bodies, while simultaneously re-creating a past narrative where disability was seen differently. The statues of the athletes in fact stand as proof of an identity that was and should be respected as it is, following ‘the ancient Greek tradition of conspicuous display of, largely idealized, athletic bodies in statuary’ put in ‘center stage in the cityscape of Greek communities.’[11]

As Vlahogiannis states,  however, the body of the disabled person has always been judged and ‘ascribed with values’[12] according to different ideals of  the body in different communities. Rising Phoenix presents two types of communities in the environment of the Olympic and Paralympic games: one where these bodies are harshly judged and commented upon, signaled by the cracks on the marbles, and one where the athletes and the games are respected and celebrated, symbolically represented by close-ups of the statues that focus not on possible cracks and damages, but rather on their statuary presence through slow camera movements, and zooms in their specific sporting ability. 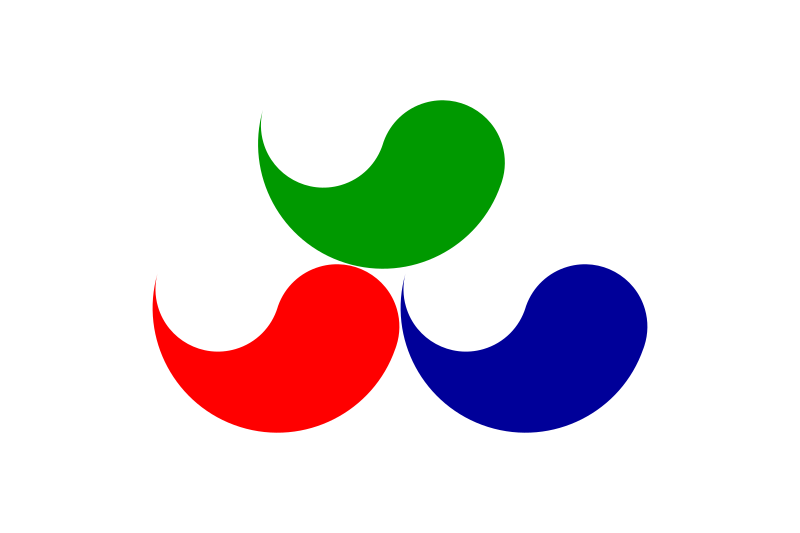 Rising Phoenix’s marble statues, then, shows not only how ‘approaching the ancient world through the lens of disability studies contributes to a fuller understanding of the lives and experiences of the ancients’,[13] but that approaching the ancient world through the lens of disability studies also provides a new understanding and a new approach for the perception and understanding of disabilities in the present. By comparing the cracks in the statues to the history of social attitudes towards disability, Rising Phoenix makes sure that the classical statue itself is instead regarded as intact, making physical disability an inherent part of the statue and of the body it represents and thus avoiding a narrative of breaking and re-constructing common when it comes to disabled bodies and their prostheses.

The classical past as portrayed in Rising Phoenix presents through the marble statues ‘a catalog of the many physical impairments’ which ‘is a corrective to the image of the perfect Greek human body that has been left to us in Greek statuary and fortified by erroneous artistic depictions of everyday Greek life.’[14]  Ultimately it is not the cracks on the statues that one focuses on when watching Rising Phoenix: instead, the statues are last filmed in a group, cross-edited with their model, in an all-too-Greek celebration of athleticism and professionalism, opening up, just like Hephaestus, a world where disabilities and disabled athletes, along with the Paralympics, have a long history of being respected, celebrated, and honored.

Crust, Kevin. 26th August 2020. “Review: The Olympics are postponed, but ‘Rising Phoenix’ spotlights athletes of the Paralympics”. In The Los Angeles Times.

Garland, Robert. 1995. The Eye of the Beholder: Deformity and Disability in the Graeco-Roman World. London: Duckworth.

Laes, Christian. 2018. Disability and the Disabled in the Roman World: A Social and Cultural History. Cambridge: Cambridge University Press.

[1] Kevin Crust, “Review: The Olympics are postponed, but ‘Rising Phoenix’ spotlights athletes of the Paralympics”, in The Los Angeles Times (26th August 2020).

[6] Robert Garland, The Eye of the Beholder: Deformity and Disability in the Graeco-Roman World (1995, London: Duckworth), p. 64.

[9] Christian Laes, Disability and the Disabled in the Roman World: A Social and Cultural History (2018, Cambridge: Cambridge University Press), p. 19.

Eleonora Colli is a PhD student in Classics at the University of Oxford. Her project aims to explore the role played by the figure of the simile in disturbing the gender binary, both across classical literature and its modern reception in 19th and 20th century queer writing. Other interests include Modern Greek poetry and theatre, comparative literature, and post-colonial receptions of the classics. You can reach her at eleonora.colli@classics.ox.ac.uk, or find her on Twitter at @elecollii.