Blog: Come and Take It: The End of Eidolon

Late in the afternoon on November 5, 2020 — close to 24 hours after polls across the country had closed for the 2020 elections — the NRA tweeted a familiar phrase: “Come and Take It.” 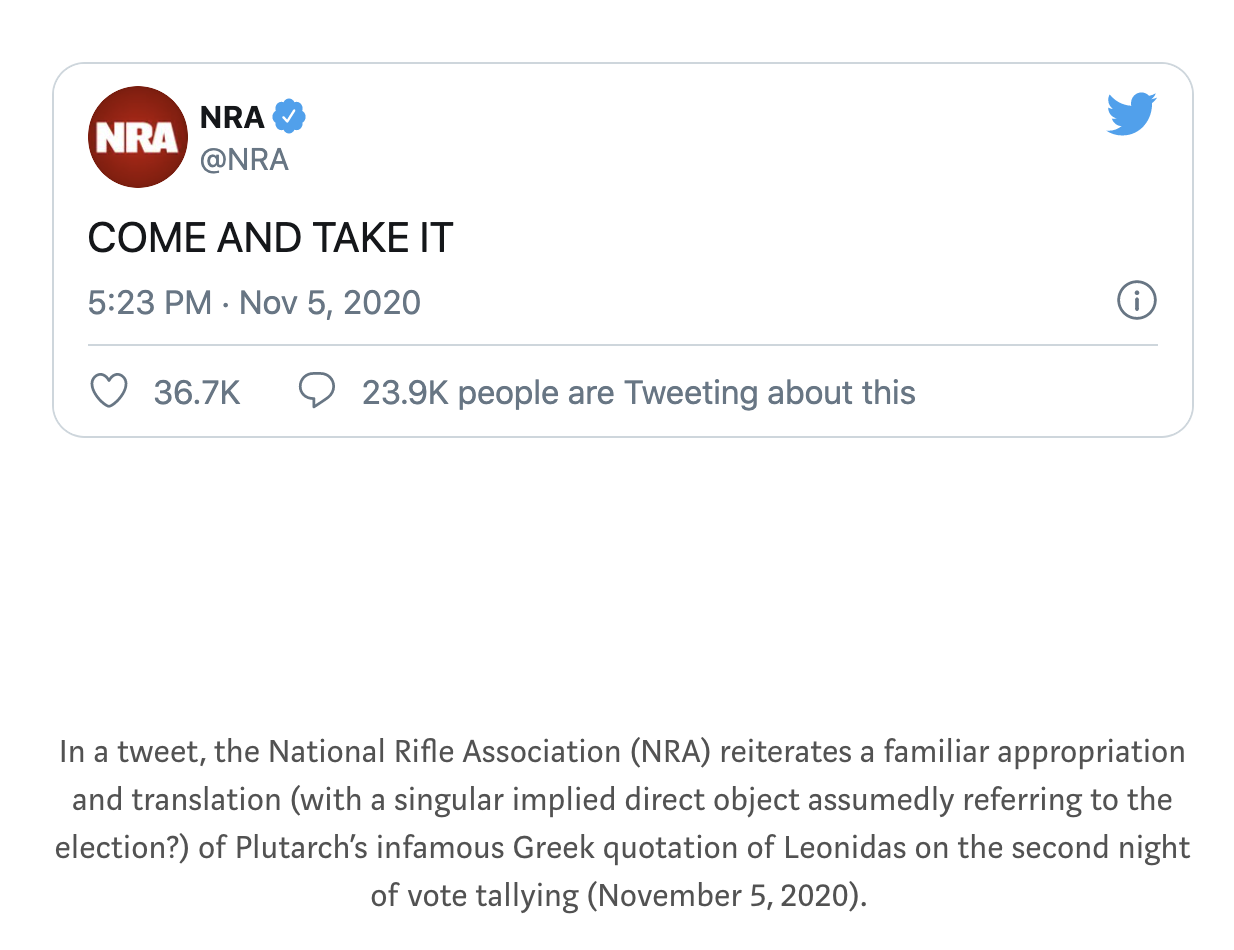 In May of 2018, I wrote about the valorization of ancient Sparta for Eidolon. The article underscored Spartan culture as a romantic figment of the far right imagination within America. The growth in the use of Plutarch’s alleged quote of the Spartan king Leonidas, whom the Greek historian says answered back ‘μολὼν λαβέ’ (“having come, take” or in less direct translation, “come and take [them]”) to the Persian king Xerxes when told to surrender his arms, continues to grow in popularity among gun enthusiasts on the far right. Although much has stayed the same since I first wrote about Sparta, much has also changed. We are likely to have a new President-elect by the time this article is published and to see the first woman––a Black and South Asian woman, no less — become our Vice President-elect. Moreover, my father, whom I remarked upon in the original article as a helicopter pilot and veteran of the Vietnam War, died a few months after I sent him that piece.

When I heard the news that Eidolon would be publishing its final issue, I lamented the shuttering of a digital forum that had created a welcoming, respected, and competitive space for classicists to publish within. Never before had a publication within the field of Classics focused so explicitly on lifting up the words, ideas, and voices of historically marginalized groups, graduate students, women, and those often viewed as outside the traditional bounds of the ivory tower. To use a movie reference familiar to us Iowans: the editors at Eidolon had always known that if they built it, these groups would come. The rest of us watched and, ultimately, took notes.

It is indisputable that Eidolon has made Classics more transparent, humorous, and accessible. It became an important gateway publication for training public intellectuals to speak to the world at large and many young scholars’ first publication credit. It is one reason the SCS paired with Eidolon and Northwestern University last year to do a workshop on public writing. However, Eidolon also gave us permission––as ancient historians, art historians, classical philologists, archaeologists, and philosophers––to speak in the first person in a way that no academic journal ever had. In my work at Forbes and now at Hyperallergic, I have only rarely spoken in the first person. To the minds of many, journalism and academic writing requires a distance, objectivity, and lack of emotion which the first person singular can often appear to collapse when used in prose. And yet what is our research if we exclude ourselves from the narrative?

When I taught Julius Caesar’s Bellum Gallicum and Bellum Civile, students always commented on Caesar’s Bob Dole-like proclivity towards illeism; his habit of using the third person in order to distance himself from the narrative. The BG and the BC lack first person hints as to the actual author in part to cast the commentaries as valid military records. And yet, if we look to Apuleius’ Apologia, Marcus Aurelius’ Meditations, or Augustine’s Confessions, there are a number of examples in Roman literature of using the first person in potent prose. Eidolon encouraged the creation of a memoir-research genre within the field which allowed many of us to see our pain and our passions addressed by others. And sometimes inspired us to discuss our own.

When I first read Nandini Pandey’s “Not Bringing Home a Baby,” I closed the door to my office at the University of Iowa and sobbed softly while rereading her words and reaching for the old ultrasound scans I kept in the secret pocket in my purse. Prof. Pandey had eloquently put into print the words I was not brave enough to write myself. Yes, I had wanted to explain to people after the disastrous SCS meeting in San Diego that I was pregnant with twins. We lost them soon after. I fell into a pretty deep period of depression, but Prof. Pandey's words emboldened many of us who struggle with infertility and pregnancy loss to come together and to find strength in a community of female academics who had experienced this often undiscussed pain. From left to right, classicists Victoria Leonard, the author, Nandini Pandey, and Jinyu Liu gather outside the British Museum in London in July of 2019. (Photo by the author).

Academia rewards stoicism in the face of personal struggle and women often stay silent so as not to be cast as angry, bitchy, or hysterical. That is so often why we reject speaking passionately in the first person. And yet Eidolon published authors that continued to break down these expectations. When Kristina Killgrove revealed the reasons behind her decision to leave a tenured position as a bioarchaeologist, many of us nodded our heads in agreement at the bravery and truth in her stating, “I once was willing to do anything for an academic job, but that enthusiasm is untenable.”

At the “Pro Publica: A Public Classics Workshop” at Northwestern University in October of 2019, classicists, editors, art historians, archaeologists, ancient historians, and historians of religion came together to discuss the mechanics of public scholarship. From left to right: Claire Voon, Helen Cullyer, Nyasha Junior, and Donna Zuckerberg (Photo by the author).

From bioarchaeology to medieval history, Eidolon forged bridges between the disciplines and time periods connected to but often marginalized by Classics. It also provided warnings about the future of our world and our discipline which, with hindsight, we should have heeded sooner. In Monica Green’s “When Numbers Don’t Count: Changing Perspectives on the Justinianic Plague,” the esteemed medievalist and historian of medicine explored new scholarship on the 6th century CE Plague of Justinian. Prof. Green had read the tea leaves well before the spread of COVID-19 and warned all of those invested in the study of antiquity:

Debates about infectious diseases have more than historical import. As we move into the third decade of the twenty-first century, we are facing a world without precedent. Documenting not simply climate change, but the ways altered temperature and weather patterns create permissive environments for new (or newly circulating) diseases is of the utmost urgency. Of the diseases known or believed to have struck the ancient world, all, save smallpox, still exist. If there was ever a time when cross-disciplinary understanding, dialogue, and cooperation were necessary, it is now. Plague may not be the next pathogen to threaten us, but better understanding its history will prepare us to face whatever does loom on the horizon of our Anthropocenic age.

As per usual, Prof. Green was right. The pandemic (and the thousands of bad takes on the Black Death leading to the Renaissance written predominantly by older white men with too much time on their hands who had not yet started a podcast) has only thrown into relief how important it is and was to prepare for the role of disease in the Anthropocene. 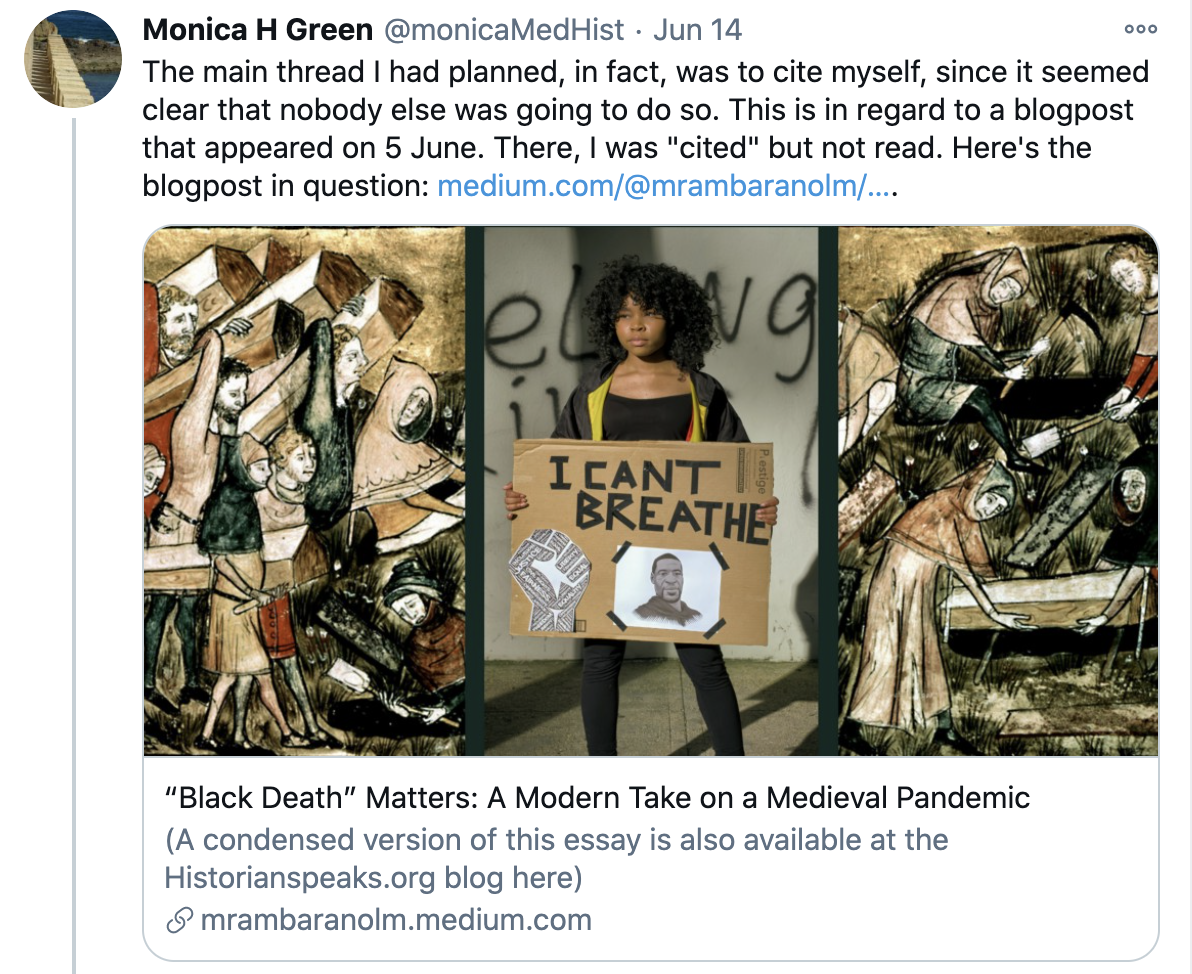 The ability of Eidolon to shine a light on the shadowy areas rarely addressed (and readily ignored) in our field didn’t stop with inspiring professions of personal pain. In 2016’s “Making a Monster”, Sarah Scullin wrote about Holt Parker and whether we can indeed separate the art from the artist. In so doing, she was the only classicist to address in print the arrest (and subsequent imprisonment) of the University of Cincinnati Classics professor on child pornography charges. Other classicists such as Christopher Haas and Kenneth Sams, as well as Biblical Studies professor Jan Joosten have faced similar allegations or charges. It took me more than three years to address this trend publicly, despite the fact that Sams was my Greek Archaeology professor at UNC-Chapel Hill. As has been the case since its inception, Eidolon’s editors and authors pioneered a new and necessary transparency in the field and modeled behavior for the rest of us. 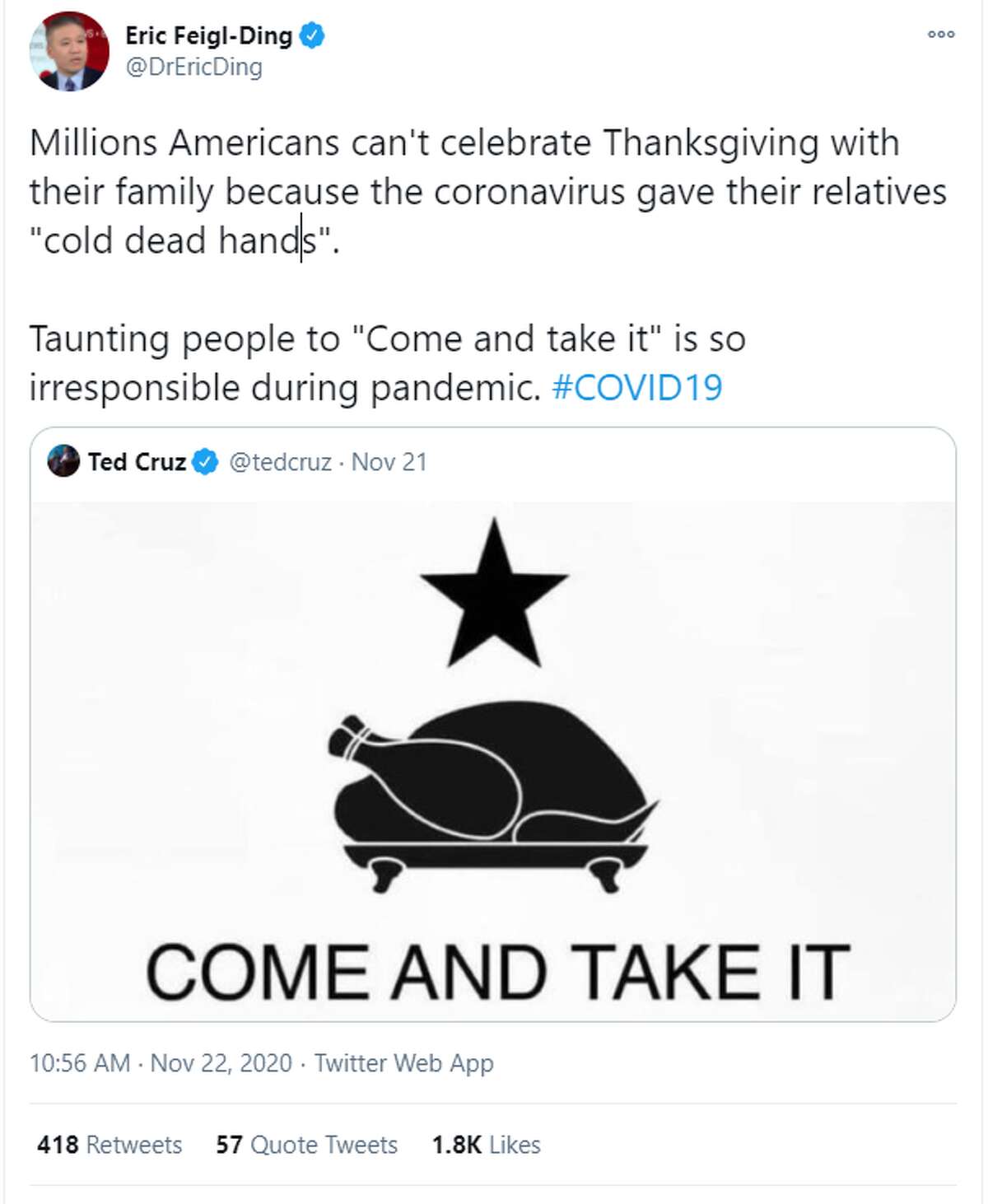 Attempts to appropriate Sparta will not end with the election of Biden in 2020. In "This Is Not Sparta”, I harangued classicists and medievalists alike “to call out the appropriation of the ancient, late antique, and medieval Mediterranean.” I underscored the deeds of white supremacists and men like Steve Bannon who are, indeed, ever-easy to loathe. But now it is perhaps time to be more reflexive; to look internally rather than externally in order to address the miasma in our field. For years, Eidolon and its editors provided agency, but they also endowed us with sharp tools for honing our craft and our field, all while speaking in the first person.

In my conclusion, I ended by chiding white supremacists: “You want our history? Well, molon labe.” Eidolon has given classicists the intellectual arms with which to fight and to make their voices heard. And the thing is? Nobody can come and take that away from us.

Post Scriptum: We did eventually have that baby. She does not yet know Latin or Greek, but she has heard many Eidolon articles before bed.

01/20/2021
Blog: Inauguration rites, in Ancient Rome and the modern U.S.A, are more than mere pageantry
Were Joe Biden ascending to the chief executive office in Ancient Rome — as one of the year’s two elected consuls...
01/15/2021
Blog: Classical Architecture and the Attack on the Capitol
On December 21, 2020, which now seems like eons ago, Donald Trump issued the “Executive Order on Promoting...
01/12/2021
Blog: A committee, a coup, a Cruz, and a Catiline
Against the backdrop of the United States’ first non-peaceful transition of power, there is a much smaller-scale...
12/21/2020
Blog: Stultitiis et rebus infestis: Petition for UVM to Surrender its Motto
In memoriam Stellae Q. Decimae Lucerna ardens extinguitur   In March 2019 the Classics Department of...
12/18/2020
Blog: Contingent Faculty Series: An Interview with Joshua Nudell
Our third interview in the Contingent Faculty Series is a digital sit-down between Salvador Bartera...
END_OF_DOCUMENT_TOKEN_TO_BE_REPLACED