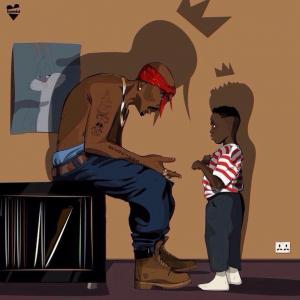 To a classicist, Lamar’s engagement with Tupac in “Mortal Man” might resonate with the well-established model of classical reception whereby a later artist draws from the work of an earlier one, reshaping it into new forms, combining fresh elements in unexpected ways that shed light on both the modern and the ancient works. To a rapper, this same process is fundamental to hip hop’s practice of sampling, in which portions of other recordings are looped into a new track and combined in fresh ways to create what ground-breaking hip hop theorist Tricia Rose describes as a “musical collage.” The effect is to pay homage to one’s predecessors while creating a radically new work that connects itself to a history and community of music and storytelling.

Since Milman Parry and Albert Lord’s research on oral poetry in the 1930s, there has been a resurgence of interest in performing epic. If the roots of Homeric epic were to be found in oral traditions rather than written, the poems lost some of their defensive barbed wire. If there was no initial, single, authorized version, modern performers needn’t be constrained by the text as we have it now. To riff on the Homeric epics is to place oneself within the tradition from which they grew, but also to extend that tradition in new directions so that one of the most canonical of genres becomes a vehicle not for conservatism but for revision, corrections, democratization, and decolonization.

But it is not just about ancient Greek epic, as hip hop’s idea of “digging in the crates” reminds us. The phrase refers to searching for rare vinyl records in what would have originally been old milk crates in second-hand music stores; artists then use this found music in new work, sampling it, re-working it, nodding to its creator, and engaging with it in their own music. This is a model that proves apt for the kind of classical reception enacted by some contemporary artists, reminding us that any notion of the centrality of Graeco-Roman classics is not universal. In the world of hip hop, these works are more often seen as valuable but forgotten records, which can be dusted off and brought to new audiences.

So it is in Lamar’s “Mortal Man,” which warrants the attention of those interested in Graeco-Roman antiquity and its afterlife not only because of its mode of engagement, but also its subject matter. The otherworldly conversation between Tupac and Lamar has striking resonances with the Underworld episodes of Odyssey (book 11) and Aeneid (book 6), not least in the way that Lamar positions Tupac as an ancestral figure who can offer him guidance:

Me being one of your offsprings
Of the legacy you left behind,
I can truly tell you that there’s nothing but turmoil going on.
So, I wanted to ask you, what you think is the future
For me and my generation?

Just as Aeneas discovers a prediction of the future from the dead Anchises, so does Lamar from Tupac. As the track ends, we hear Lamar calling after Tupac who has, presumably, disappeared into the ether, leaving the younger rapper only able to echo his name helplessly three times, like Odysseus and Aeneas trying in vain three times to grasp the ghost of their parent in Homer’s and Vergil’s poems. Set against a background of free jazz, this moment also evokes — to my ear at least — the eerie cries of the scrambling shades desperate to drink the blood and be heard by Odysseus in the Underworld.

“Mortal Man” is the closing track of To Pimp a Butterfly. At 12 minutes long, it is epic in length (compared to the average 4-minute track on the album) as well as theme. It is a reflection on heroism, survival, and kleos in 21st-century America. I say kleos, rather than just “fame” or “celebrity,” because the Greek concept — as instantiated in Homeric epic — is so closely aligned with Lamar’s vision. The track’s refrain, “When shit hit the fan, is you still a fan?” can be heard as a modern version of the question that Achilles asks himself when Agamemnon takes Briseis away from him. And is it not the same question that Odysseus must have asked himself before he launched into his version of his tale in books 9–12? Both ancient Greek heroes know that the answer to that question is “no”: if their luck changes, if people doubt them, they will lose their kleos. And it is that answer that drives their next decisions: Achilles’ sulking rage because he fears that Agamemnon is threatening his kleos; Odysseus’ awareness that this is his moment to paint himself in the best possible light.

Kendrick Lamar does not explicitly engage with Graeco-Roman antiquity, yet in his stated desire to represent and reflect on his “urban community,” his music stands as testament to a collective African American identity in a way that might remind us of the panhellenic ideal articulated in the Homeric epics. Lamar may even have had epic narratives in mind as he conceived To Pimp a Butterfly, with “Mortal Man” self-consciously signifying upon (to use a term theorized by Henry Louis Gates, Jr.) archetypal epic tropes such as a journey to the underworld, the invocation of the Muse, and the sense of community evoked and consolidated by epics from around the globe. Doing so is in keeping with Imani Perry’s argument that hip hop is “an iteration of black language, black music, black style, and black youth culture” and takes its cue from a part of the Tupac-Nileskär interview that Lamar omits, in which Tupac aligned himself with West African griots, identifying rappers as the storytellers of the United States. Following this lead, it is Tupac and Nelson Mandela (rather than, say, Odysseus and Aeneas) who are hailed as heroes in Lamar’s music.

Observing the Greco-Roman resonances of “Mortal Man” is not to attempt some kind of Eurocentric land-grab of hip hop. Instead, it reminds us that, in its syncretic complexity, hip hop deploys tropes and forms found in ancient literature too, and that engaging with what hip hop does (politically, intellectually, culturally) has the power to illuminate both ancient and contemporary music-based narrative, whether modern rap or classical epic.

Justine McConnell is Senior Lecturer in Comparative Literature at King’s College London. She is author of Black Odysseys: The Homeric Odyssey in the African Diaspora since 1939 (OUP, 2013) and, with Fiona Macintosh, Performing Epic or Telling Tales (OUP, 2020). She has also co-edited four volumes on the reception of Graeco-Roman antiquity. You can find her on Twitter at @drjmcconnell.

05/23/2022
Blog: Contingent Faculty Series: An Interview with Victoria Austen
Our seventh interview in the Contingent Faculty Series is a virtual conversation between Dr. Taylor Coughlan and...
04/13/2022
Blog: Two Years Later: “Classics” after Coronavirus?
In an April 2020 post for Eidolon, I gathered predictions on “classics after coronavirus.” Two years later, it’s...
04/08/2022
Blog: Ancient Worlds, Modern Communities: Increasing Accessibility for the Study of the Ancient World
The Ancient Worlds, Modern Communities initiative (AnWoMoCo), launched by the SCS in 2019 as the Classics...
03/21/2022
Blog: I Love You, I Hate You: A Student’s Perspective on Learning Latin
I have always enjoyed Latin class because it felt like a puzzle, much like math. Find the verb, find the noun that...
03/18/2022
Blog: Power to Punish and Authority to Forgive: Imperial State and Imprisonment in 4th-Century Antioch
Research ideas often develop out of chance encounters or unplanned circumstances. My dissertation project was born...
END_OF_DOCUMENT_TOKEN_TO_BE_REPLACED