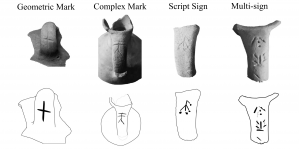 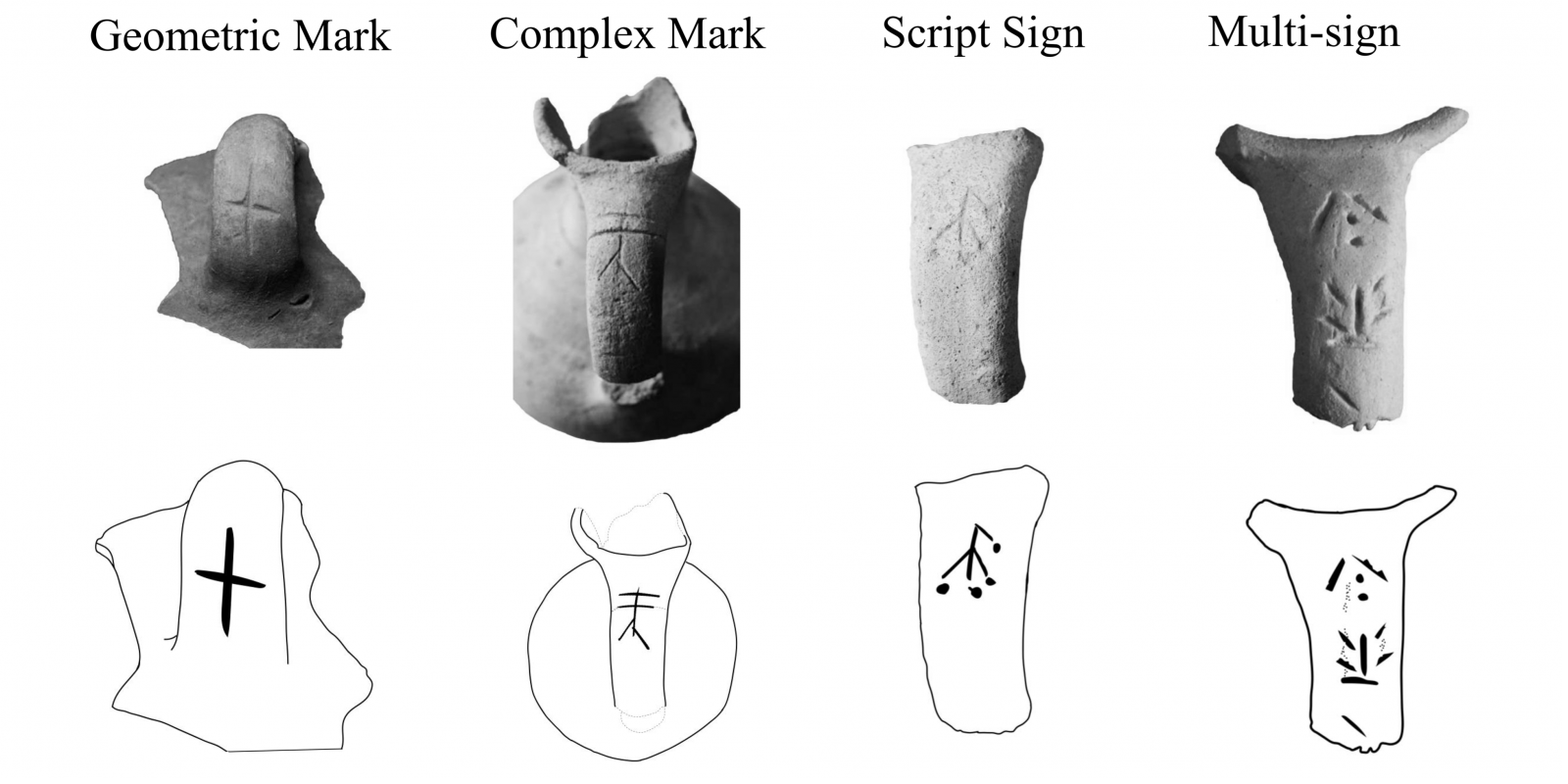 The first tier of my argument is based on a comparison of the material features of the single-sign text potmarks and multi-sign Cypro-Minoan vessel texts. According to diplomatics, a branch of Information Sciences, a text’s external material features are indicative of the institutional settings in which it was produced. A text’s material features include its formatting, writing medium and material, writing implement, and more. For instance, a letter is identifiable as such on account of its particular formatting. Other material features of the letter — such as the quality of its paper, its letterhead or lack thereof, whether it was typed or hand-written — reveal information about the letter’s creation, such as the decade it was written, or whether it was an informal document shared between friends or a formal document composed in a professional setting. Letters that follow the same formatting conventions, written on the same types of paper, and with the same writing implement most logically were produced in the same institutional setting. A comparison of the multi-sign vessel texts with the potmarks shows that texts of both lengths appear on the same types of vessels, on the same parts of the vessels, and are made using the same methods. These similarities suggest that the people who produced the single-sign potmarks and the multi-sign vessel inscriptions were working out of the same institutions. They had access to the same types of vessels and treated them in the same manner.

The second tier of the argument compares the sign shapes and range of signs attested in the multi-sign texts and the single-sign potmarks, showing that there is a significant overlap in sign shapes and the range of signs. In all likelihood, the shared range of sign shapes would arise in a situation where both parties were [a] literate or were exposed to large amounts of writing; and [b] received the same training in how to draw signs.

I conceived of this argument on the analogy of determining whether the creators of a set of dubiously inscribed contemporary texts were literate. Imagine, for the sake of argument, a set of hand-drawn graphic t-shirts on a clothing rack. If the “t-shirts” evince recognizable fonts, I reason, then the designers of the t-shirts must have been familiar with writing, either because they were literate or exposed to large amounts of writing. Only persons highly familiar with the Roman alphabet or literate in it would be able to accurately replicate different letter shapes in different fonts. This familiarity with writing is what we see in the potmarks. The range of sign shapes in the multi-sign texts, which everyone agrees are words, are replicated in the single-sign potmark texts. This is true in the case of almost every Cypro-Minoan sign with a uniquely identifiable shape used in the multi-sign and single-sign texts. There is no substantial difference in the sign shapes used in the multi-sign and single-sign texts. It is therefore reasonable to conclude that the writers of the single-sign text potmarks were either literate or exposed to large amounts of writing.

For the third and last tier of the argument, I argue that the pot-markers were likely abbreviating the same words as abbreviated on the multi-sign vessel texts. I compare the signs used as abbreviations in the multi-sign vessel texts to the signs in the single-sign text potmarks to show texts of both lengths used the same repertoire of signs. Therefore, texts of both lengths were likely to [a] be abbreviations of words and [b] be abbreviating the same words.

After establishing my three-tiered argument showing that both the single-sign and multi-sign texts must be treated as evidence for literacy, I turn to signs of Cypro-Minoan writing from outside of Cyprus. I wanted to define exactly how far and by what means the script spread outside of Cyprus. An inscribed object can, of course, travel further than the people with knowledge to write or read the script in question. I wanted to distinguish between the spread of only the script, in the form of writing on a text, and the spread of the people and institutions responsible for transmitting knowledge of the script.

The ability to read and to produce writing is most always transmitted by people trained in institutions, whether formal or informal ones. David Damrosch’s concept of a “scriptworld” refers to the confluence of script, people, and institutions responsible for a script’s transmission and legibility (Damrosch 2007). The term is current in World Literature studies, where it has been applied to the study of various Ottoman period Mediterranean scripts and languages (see, for instance, Cankara 2018, Charrière 2021, Stroebel 2021). The term is useful for encapsulating how a script is always entwined in a specific sociocultural setting and for its allusion to the longue durée of script complexities in the Eastern Mediterranean. Using scriptworld as a lens, I analyze the texts from the three places where multi-sign Cypro-Minoan texts were found outside of Cyprus to assess whether, in each case, the script traveled with its scriptworld, i.e., the people and institutions responsible for its transmission on Cyprus. I conclude that Cypro-Minoan spread through different means in each case.

Cypro-Minoan writing has been found at three sites outside of Cyprus: at Ras Shamra (Ugarit), Tiryns, and Ashkelon, dating to roughly three different periods. The Ras Shamra material dates to the period just before the Bronze Age collapse in the late thirteenth century, during the period where the alphabetic cuneiform script was in use. The Tiryns material dates roughly to the period just after the collapse, ca. 1200–1100, and the Ashkelon material to the the 11th century. The texts from each site show different levels of acquaintance with the scriptworld.

At Tiryns, in the midst of the Bronze Age collapse, the Cypro-Minoan scriptworld seems to have been imported wholesale. Both the multi-sign and single-sign texts from Tiryns, many of them made from local materials, are otherwise indistinguishable from their counterparts from Cyprus. The texts at Ras Shamra from before the collapse look different. The Cypro-Minoan texts from Ugarit combine features typical of Cypro-Minoan documents from Cyprus and of the cuneiform documents from Ugarit. They embody the experimentation characteristic of much of the writing — whatever script it was written in — found at Ugarit. The Cypro-Minoan scriptworld was brought to Ugarit, where it underwent transformation. The Cypro-Minoan texts from post-collapse Ashkelon tell a different story altogether. The texts are written either in the Cypro-Minoan script or a script derived from it, but it seems unlikely that the institutions spread to Ashkelon along with the script. The material features of the texts from Ashkelon are totally dissimilar to the ones from Cyprus. The sign shapes also show some modifications. The script seems to have spread without the institutions that dictated what materials to use when making a text or how to draw the signs. 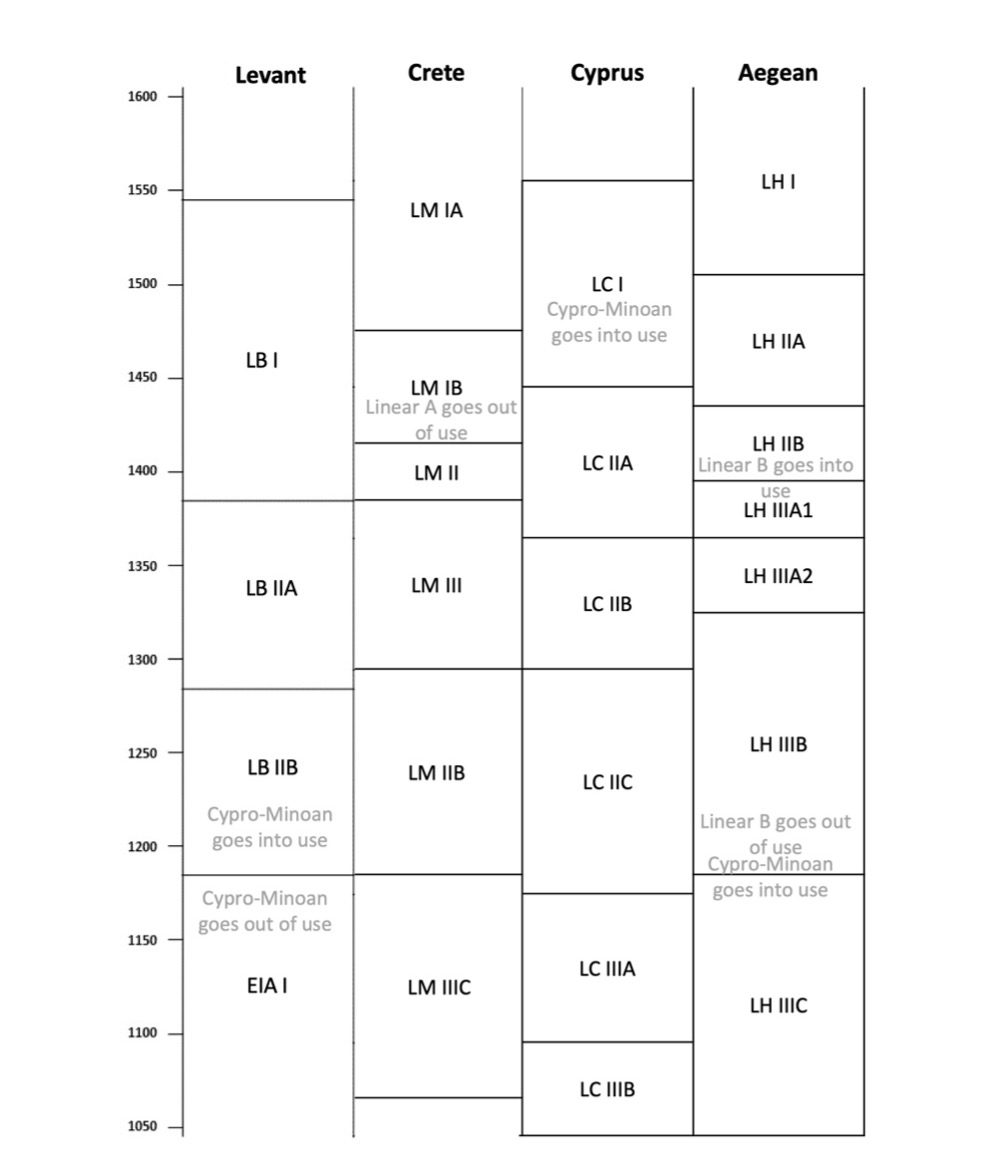 The differences in script and scriptworld in the Cypro-Minoan texts at each site speak to different mercantile strategies Cypriots used at each of the three sites before, during, and after the Bronze Age collapse. As my dissertation shows, Cypro-Minoan writing, especially in the form of the potmarks, was ubiquitous on the island of Cyprus and was geographically widespread outside of it. Cypro-Minoan and its writers were more widespread than the small 250-object corpus of multi-sign texts suggests. My hope is that my very specific study of Cypro-Minoan and its potmarks can have broader applications to the study of mercantile strategies and the spread of other scripts, such as the Phoenician alphabet, during the post-collapse and Early Iron Age periods.

Cassandra Donnelly has recently become a Dr. (October 2021). She received her PhD from the University of Texas at Austin, where she studied at the Program in Aegean Scripts and Prehistory under Dr. Thomas G. Palaima in the Department of Classics. Her research interests include Bronze Aegean and Semitic scripts and languages, the historiography of Mediterranean archaeology and decipherment, and Bronze Age and contemporary Cyprus. She would like to thank the AIA for its support of her dissertation research through the Olivia James Traveling Fellowship, the CREWS project (https://crewsproject.wordpress.com/), and the Cyprus American Archeological Research Institute (CAARI). She is currently editing a volume on "Extra-Scribal" writing for the LSANE series (https://lifeandsocietyane.com/) and eagerly awaits joining Dr. Artemis Georgiou's ComPas project (https://ucy.ac.cy/pr/documents/Press_Releases/2020/ENGLISH_2020/SEPTEMBER_2020/ERC__STARTING_GRANTS-04-09-2020.pdf) as a post-doctorate researcher this fall.

07/01/2022
Blog: Ancient Worlds, Modern Communities: Contemporary Responses to Greek Myth and Tragedy through Drama, Film, and Visual Art
The Ancient Worlds, Modern Communities initiative (AnWoMoCo), launched by the SCS in 2019 as the Classics...
06/29/2022
Blog: “Deeply rooted in history”: Teaching abortion ancient and modern in a post-Roe v. Wade world
With weary hearts, we consider with you what Classics can do in the face of Dobbs v. Jackson Women’s Health...
06/27/2022
Blog: Teaching in a Time of Anti-Asian Violence: Reflections on Asian & Asian American Experiences in Classical Studies, Part 1
This two-part series reflects upon AAPI experiences in Classical Studies. Part 1 is catalyzed by the author’s...
06/25/2022
Blog: Roe v. Wade, the GOP, and echoes of Augustus: Reproducing fascism
I guess I should say “thank you.” Gratias vobis ago. Thank you to the Republican Party’s long game, a partisan...
06/20/2022
Blog: Paternalism and the “Good Slave” in the Speech for Phormion and the Legacies of Slavery
In a discussion of the concept of the “good slave” in her book Reconstructing the Slave: The Image of the Slave in...
END_OF_DOCUMENT_TOKEN_TO_BE_REPLACED