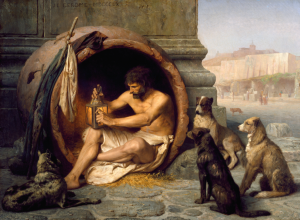 The phrase originated from an April 2021 Baidu post titled “Lying Flat is Justice” (躺平既是正义) by Luo Huazhong, with the username Kind-hearted Traveler. In the post, Luo recounts his experience of spurning consumerism, defying social pressure, and refusing to get a regular job. He advocates for a life of “sleeping and sunbathing in a wooden tub in the manner of Diogenes, or living in a cave and thinking about Logos in the manner of Heraclitus” (我可以像第欧根尼只睡在自己的木桶里晒太阳, 也可以像赫拉克利特住在山洞里思考“逻各斯). Presumably incorporating a statement attributed to Protagoras, Luo argues that “only by lying flat can a human being be the measure of all things” (只有躺平, 人才是万物的尺度).

This post became so viral that the Chinese government promptly censored it. Yet it was too late. The die of “lying flat” had already been cast.

Recently, in my Classical Tradition class at Bucknell, we had a discussion on the references to Greek philosophers in Luo’s original post. As I was preparing for the class, it quickly became clear to me that finding the philosophical connections between “lying flat” and all three philosophers was beyond my ability. Sure, some common ground can be established between the Cynics’ embrace of poverty and Luo’s refutation of consumerism. But what can I say about Heraclitus? After all, we only have fragments of Heraclitus’ writings, such as “no man ever steps in the same river twice.” Also, it does not help that I struggle to understand Presocratic philosophy in general. On the other hand, is it even necessary to analyze the references from a philosophical angle? Is it possible that Luo quoted them only for rhetorical and cosmetic effect?

Along with these questions, I also asked my students to consider the image of Diogenes in a wooden tub and that of Heraclitus in a cave. How did Luo come up with such images? The case for Diogenes is relatively straightforward. The 3rd-century-CE biographer Diogenes Laertius records in his Lives of Eminent Philosophers that Diogenes “had a tub in the Temple of Cybele as home” (τὸν ἐν τῷ Μητρῴῳ πίθον ἔσχεν οἰκίαν, 6.2.23). This image of Diogenes in a tub is also featured in paintings by Jon William Waterhouse and Jean-Léon Gérôme. In Baidu Baike, the Chinese equivalent of Wikipedia, Diogenes is also described as living in a wooden tub. Thus, it is not difficult to see how Luo got this picture.

However, the case for Heraclitus in a cave is less certain. I was not able to find any ancient sources or later paintings that associate Heraclitus with a cave. Is this an image that Luo made up on his own?

One student brought up the Allegory of the Cave from Plato’s Republic (514a–520a). Maybe Luo has confused Plato with Heraclitus? Or maybe he is intentionally alluding to Plato and Republic? Plato’s allegory describes prisoners chained in a cave with their faces turned towards the wall. When one sets up a fire behind them and places objects in between, these prisoners are only able to see the shadows on the wall instead of the real fire and objects. Maybe Luo is alluding to Plato’s allegory to show the chasm between what many Chinese are made to believe and the reality facing them. “The Noble Lie!,” one student was quick to respond. Should we interpret this image along with the Noble Lie, ψεῦδος γενναῖον, from Republic (414c–415e)?

A conundrum in analyzing someone else’s writings is the risk of overinterpretation. Perhaps Luo was not referencing Plato or Republic at all, but his protest and the Chinese government’s reactions nevertheless bear an eerie echo of the Noble Lie in Plato’s Republic. It is a lie that the interlocutor Socrates proposes to stabilize the social hierarchy in his just city, Καλλίπολις. Socrates’ just city consists of three classes of people, the philosopher-kings at the top, followed by the guardian warriors, and all the others at the bottom. The Noble Lie tells each citizen, upon reaching the age of eighteen, that they were born from the earth rather than their respective mothers. When they were in the earthly womb, their souls received different kinds of metal: gold, silver, bronze, and iron. The metal, in turn, determines their future positions in the social hierarchy. Gold is for philosopher-kings, silver for the guardian warriors, bronze and iron for farmers, craftsmen, and others. Thus, the Noble Lie makes each citizen believe that social inequality is a result of nature.

In a recent article on the reception of Republic in contemporary China, Shadi Bartsch notes a common interpretation of the Noble Lie among the Chinese readers she has encountered — “Socrates is merely stating the obvious when he explains the nonequal value of each citizen, and if an ideology is needed to get people to swallow this truth, so be it” (p. 180). The irony is that China is a nominally Socialist and Communist country. It is a regime that supposedly regards every citizen as equal, yet it often does the opposite. In the aftermath of Luo’s “lying flat” post, the Chinese government scrambled to stymie the message and correct the narrative. In one state media outlet, the news anchor reads “you may accept your fate, but you are not allowed to lie flat” (认命可以, 躺平不行). The state’s message is clear: it is nature that assigns people different lots in life and different positions in the social hierarchy, so accept it and work hard. It is almost an exact replication of Socrates’ Noble Lie that aims at ensuring stability in the unequal and undemocratic People’s Republic.

Inequality in contemporary China is manifold. The profits of China’s economic growth are unevenly distributed between coastal cities and inland regions. As the Chinese Premier Li Keqiang commented in 2020, about 600 million Chinese citizens only have a monthly income of 1000 CNY (about 160 USD). The rigid household registration system (Hukou) limits social and geographical mobility, while making millions of migrant workers second-class citizens in metropolises such as Beijing and Shanghai, the so-called “Low-End Population.” All the while, citizens are made to believe in the “Chinese Dream,” in the “great rejuvenation of the Chinese nation.” All of a sudden, Luo’s “lying flat” post woke people up from that dream.

As we approached the end of the class period, I commented on the subsequent metamorphosis of the phrase “lying flat” in the Chinese media and online community. In a surprising twist, the Chinese government has redefined and appropriated the phrase for its own benefit. In recent months, state media has often described Western democratic nations’ “Living with Covid” policy as “lying flat.” In other words, in Chinese propaganda, “lying flat” now stands for Western nations’ defeatism in the face of the virus, in stark contrast to China’s relentless pursuit of the “Zero COVID” policy. Granted, the United States’ responses to COVID-19 have been abysmal, but China has not been perfect either, particularly during the early outbreak.

The sad part is that this surreal twist of “lying flat” has made a phrase that originally exposed various domestic social problems into an unabashed panegyric of the Chinese system and the Communist Party. What could have been an opportunity to address these social issues is now an occasion for self-congratulation and self-delusion. A few weeks after our class discussion, my hometown, Shanghai, went into a draconian lockdown. When 25 million people were cut off from basic necessities, a top Chinese health official defended the lockdown by claiming again that China cannot “lie flat” like other countries. As tragedies unfold in Shanghai, an antidote to the Noble Lie has transformed into another lie.

Ximing Lu (陆西铭) is a Visiting Assistant Professor of Classics & Ancient Mediterranean Studies at Bucknell University. He received his PhD in Classics from the University of Wisconsin-Madison in May 2021 after completing his dissertation “The Ciceros in Athens: Study Abroad and Roman Politics.”