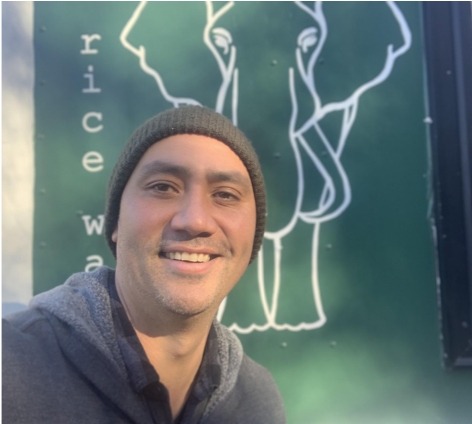 It takes a whole lot of grit and a generous dollop of vim to succeed as an entrepreneur. Jeremiah Chatham, classics major turned chef and owner of The Rice Wagon LLC, has both qualities in abundance. Indeed, he credits his study of Latin and ancient Greek with teaching him “how to really dig in and work hard.”

Chatham graduated from the University of North Carolina Asheville with a BA in classics. He wrote his senior thesis on the aspis, the famous shield of the Greek hoplite formation, and presented his findings at the National Conference of Undergraduate Research. While most scholarship focused on the shield’s use in combat, Chatham delved into the process of its construction and the people who made it. His interest in cultural knowledge also inspires his business. “When I feed people, I’m trying to give them that notion of my home, my culture. And that’s felt and shared through the heart.” Chatham’s research required him to draw on a wide variety of evidence. This breadth is what attracted him to classics in the first place: “When I was looking for a major, I wanted to study everything—history, philosophy, art, literature, archaeology. The study of classics let me learn all of these disciplines while also giving me the framework to continue studies in each of these fields.”

Chatham’s first job after graduating was an entry-level position waiting tables at Harrah’s Cherokee Casino and Resort. Within a year he was promoted to the position of Executive Steward, overseeing fifty stewards. A year later, he was appointed general manager of Chefs Stage, a 640-seat restaurant at the casino. Soon he took on an additional role as continuous improvement consultant, and concurrently earned an MBA in Global Strategy and Leadership from the University of Tennessee! A colleague of his describes him as a “strong leader” and “detailed strategist.” Classics prepared him to be protean and open to a broad range of possibilities. He chose classics because he wanted an education, not narrow technical training. 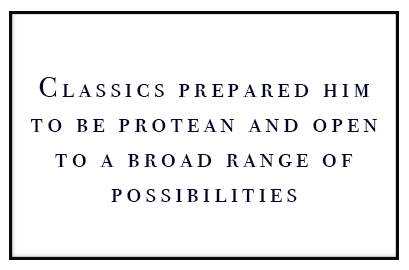 Not all has been smooth sailing. In 2015 Chatham experienced an annus horribilis: he went through a separation, lost a close friend, and quit his job. Buffeted but not broken, he regrouped, and worked for a while in carpentry and construction. “I’m scrappy,” he reflects. “I’ve had lots of disappointments and my ability to keep fighting has been the greatest trait.” Undeterred, he launched The Rice Wagon LLC, a food truck and catering business specializing in Hawaiian street food and fusion cuisine.

Sharing the food he grew up with brings Chatham great joy. And the people of North Carolina respond in kind. “Ordered the Kalua pork. Had to shake this man’s hand after I was done,” writes one happy customer. “Mahalo bruddah for some great food,” raves another. “So thankful for Jeremiah for representing food from the islands so well!” Per ardua ad astra (“through adversity to the stars”) would be a fitting maxim to describe Chatham. His joie de vivre is palpable. He enjoys good food, good beer, and a good read. “Whenever I pick up a book, I read with the eyes of a classicist,” he reflects. “Because I studied Greek and Latin, I am able to read across disciplines—even technical fields—with relative ease.” His classical education has equipped Jeremiah Chatham for whatever books—and life—throw his way.

‹ What Is classics? up What Can I Do with a Classics Major? ›