Blog: Teaching and Learning at the Museum, A Liberal Arts College Perspective 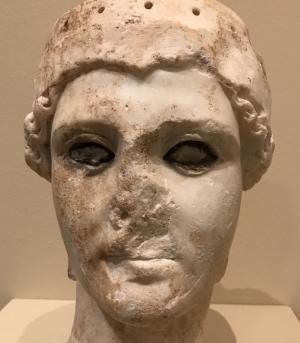 Campus museums can help professors not only to teach about the ancient world, but also to explore connections between different civilizations, time periods, and media. At Oberlin College, professors engage with the collection at the Allen Memorial Art Museum to teach a variety of topics – from philosophy to cinema studies, from anthropology to book studies. This collaboration between professors and the museum’s curators creates evocative and unexpected links for both students and professors, aiding in the interdisciplinary exploration of material.

At Oberlin, it is common for professors to use the museum at some point in the semester– over 300 classes from 32 different disciplines come to the museum each academic year. How do they get the most out of a visit? Pre-visit conversations with museum curators to discuss learning goals, to scrutinize possible works, and to inquire about additional material in storage are key. The objects on display can be used to create a web of connections about almost any topic.

For Classicists, the small, but stellar collection of ancient Mediterranean works at the Allen is, of course, the first place one would linger. Works like a 6th-century BC kylix are helpful for students to discuss the ancient symposium, Athenian history and society, and even drinking games (kottabos). A recent Calculus class taught by Chris Marx, however, found that this object was an effective and memorable tool to learn how to plot a curve. Museum staff measured the interior of the cup and provided the students the data so that they could determine the curve and discover its volume capacity. The fact that it held nearly 3 liters of wine makes one wonder about the kottabos player’s aim after a couple rounds of drinking and how slurred those speeches would be in Plato’s Symposium!

Often a work in the AMAM’s collection can provide new perspectives through cross-cultural insights. A mid-19th century Japanese print depicting The Kindness of the Catfish in Restoring the World shows anthropomorphized catfish helping the survivors of an earthquake. While this woodblock print illustrates the traditional tale of a giant catfish living under Japan that creates earthquakes when it moves, it has also helped Chris Trinacty’s students to visualize the Greco-Roman gods in an almost Ovidian manner.  Chris has used it as well to think more about responses to trauma, especially earthquakes in the ancient world (such as Seneca’s Naturales Quaestiones 6), and the process of recovering from trauma. What is the role of the gods? How should one depict suffering and how can this be put in dialogue with Roman representation of earthquakes? Considering works of similar subjects from different regions of the world can lead to cross-cultural contextualization that illuminates novel approaches for professors and students alike.

Classical myth finds a myriad of expression in art throughout the millennia. Rubens’s 1632-33 painting of The Finding of Erichthonius depicts an episode from a classical myth, but it also encourages the viewer to question the work itself. Students are bombarded by images on their computers and phones, but how often do they think and critically question those images? When confronted with a work of art, we ask the students to describe what they see and to ask why it looks the way it does. While most students can answer the first question, critical thinking is demanded by the second, leading to fruitful discussions that can touch upon history, craftsmanship, social movements, religion, women in the ancient world, or other issues.

The Rubens painting, which is a fragment of a larger canvas that no longer survives intact, acts as a broader metaphor for the way that we visualize using the museum. As a fragment, it shows only part of the story of the discovery of the child Erichthonius by Cecrops’s daughters, but its cropping spotlights that moment in a suggestive way, inspiring the viewer to imagine how the rest of the story might have been depicted, and to think about the social and historical circumstances that contributed to the painting’s creation and destruction. Most of the museum’s works, when placed in various teaching contexts, can provide a striking example of one part of a larger story, whether that story is from the Classical world, from the Old Testament, from ritual ceremonies in Africa, or from a historical movement.

In the AMAM’s contemporary gallery, one currently finds Eva Hesse’s sculpture, Laocoon, a very modern take on the famous Hellenistic sculpture. Distilled down to its elements, the architectural cube-like structure is entwined with ropes and painted a corpse-like pallor. Not quite a literal representation of the narrative, this artist’s work responds to the tradition, but also breaks distinctly from it. Tension, structure, flexibility, and rigidity are highlighted in this Minimalist sculpture that boils down the story to its basic physics and the ash-grey skeleton of Laocoon. With Latin students or students from the ancient epic course , we ask them to to identify the myth it represents without reading the title. While some have guessed Medusa, and others Daphne, many have found this to be an evocative representation of Laocoon’s struggles against the serpents who “bind and tie him in their massive coils” (corripiunt spirisque ligant ingentibus, Aen. 2.217).

Museums at liberal art colleges offer wonderful opportunities to teach actively with the collections, and their curators focus on the ways in which the collection can be used for teaching. Working across media and time periods is the norm for curators at small academic museums, and their broad knowledge of the permanent collection allows them find new ways to juxtapose objects specific to the needs of individual classes.  Engaging with these objects allows professors to model an interdisciplinary view of the world. These cross-cultural and interdisciplinary connections help to foster awareness that the subjects students are learning are not in a vacuum, but can resonate with a host of other concerns and materials.

We recognize that many faculty take advantage of museums for their classes and encourage them to utilize the comment section of this blog to share their own assignments and projects. We hope to start a dialogue through this blog post that will draw upon the experiences others have had teaching and learning at the museum.

Andaleeb Badiee Banta has been Curator of European and American Art at the Allen Memorial Art Museum at Oberlin College since 2013, organizing exhibitions and teaching classes that highlight the museum’s extraordinary collection. Dr. Banta holds a Ph.D. in art history, with a specialization in Renaissance and Baroque art, and she has held curatorial positions at the Morgan Library & Museum and the National Gallery of Art. She recently edited The Enduring Legacy of Venetian Renaissance Art (Taylor&Francis/Routledge, 2016), and co-authored Lines of Inquiry: Learning from Rembrandt’s Etchings (Cornell University, 2017). Her publications also include articles in such peer-reviewed journals as Master Drawings, The Burlington Magazine, and Apollo. Dr. Banta is currently conducting research on the old master drawings collection at the Allen.

Andaleeb Badiee Banta has been Curator of European and American Art at the Allen Memorial Art Museum at Oberlin College since 2013, organizing exhibitions and teaching classes that highlight the museum’s extraordinary collection. Dr. Banta holds a Ph.D. in art history, with a specialization in Renaissance and Baroque art, and she has held curatorial positions at the Morgan Library & Museum and the National Gallery of Art. She recently edited The Enduring Legacy of Venetian Renaissance Art (Taylor&Francis/Routledge, 2016), and co-authored Lines of Inquiry: Learning from Rembrandt’s Etchings (Cornell University, 2017). Her publications also include articles in such peer-reviewed journals as Master Drawings, The Burlington Magazine, and Apollo. Dr. Banta is currently conducting research on the old master drawings collection at the Allen.

01/24/2022
Blog: RU an Antígone?
RU an Antígone?, a play based on Sara Uribe’s Antígona González, was performed by Rockford University students on...
01/21/2022
Blog: News from Vermont: The Ambrose Graduate Fellowship in Classical Languages
Happy news and an update on affairs at UVM. A generous gift from Emeritus Professor Z. Philip Ambrose will let...
01/18/2022
Blog: Asterion: Making Neurodiversity Visible in Classics
As an autistic classicist, one of the things I’ve always struggled with is social interaction. In class, I teach...
01/09/2022
Blog: Inclusive and Culturally Responsive Teaching in Classics
Like many educators, I have found myself in an endless loop lately of thinking and rethinking my teaching...
01/07/2022
Blog: A Digital Ethnography of a Conference in a Crisis
To write about the Capitol Insurrection, as the one-year anniversary approached, I went back through my chat logs...
END_OF_DOCUMENT_TOKEN_TO_BE_REPLACED