Blog: Global Feminism and the Classics at the SCS Sesquicentennial 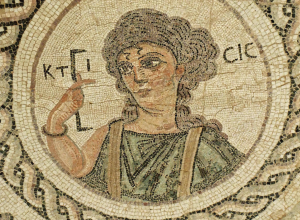 As the field of Classical Studies has sought to maintain its relevance in our ever-changing modern world, it has begun to incorporate new approaches. Today there is much more scholarship on topics such as gender, sexuality, and race in the ancient world, for example, than there was even thirty years ago. Much of this change has resulted from the incorporation of theoretical frameworks from fields outside of classical studies, including literary criticism, gender and sexuality studies, and social theory. Yet there is still so much work to be done, especially when it comes to understanding marginal groups in antiquity, such as women, ethnic minorities, and sexual minorities.

One framework that has been underutilized in the field of Classical Studies is global/transnational feminism, a feminist approach that challenges the tendencies of Western feminism to universalize the Western experience onto other cultures. Global/transnational feminism instead examines the diverse experiences of women and sexual minorities across the globe and takes into consideration how the intersections of cultural, economic, religious, social, and political structures impact individuals in different places.

Such a transnational feminist approach has great potential for scholars and teachers of the Greco-Roman world, as it challenges us to escape the tendencies our field has to examine Classical culture from the usual perspective of the modern West. This traditional West-centric approach often is based in the conviction that states that Greco-Roman culture provided the most important foundations for so-called “Western Civilization.” Yet this myopic view of antiquity has also created challenges to our field. We see declining enrollments in our programs, as the history and culture of the ancient Mediterranean is so often seen as exclusively “European” or “white.” The demographics at colleges and universities are rapidly diversifying, and many students, including students of color, struggle to see the relevance of the “old white dudes” in their worldview. In addition, classical art and ideas are commonly co-opted by hate groups to galvanize and increase their own influence in Europe and the United States.

By exploring conceptions of gender, sexuality, ethnicity, and class in non-Mediterranean cultures and comparing them to Greek and Roman cultures, we can find alternate ways of understanding Greco-Roman culture beyond our western-centric viewpoints. There is much potential value in drawing cross-cultural comparisons with societies that regularly interacted with the Greeks and the Romans, such as the Celts, Egyptians, and Persians, as well as societies further afield, such as East and South Asia, who may not have interacted with the Mediterranean as much and as directly, but who can help provide us with alternative ways of understanding the construction and role of gender and sexuality within a society.

This year’s Women’s Classical Caucus-sponsored panel at the Annual Meeting in San Diego, titled “Global Feminism and the Classics,” is one way for us to begin exploring the ways in which a global/transnational feminist approach can help open up our understanding of ancient Mediterranean constructions of gender, sexuality, and culture as a whole. The panel’s organizers, Jeremy LaBuff and myself, are interested in fostering discussions that address how we can incorporate more global approaches to the Greco-Roman world in both our scholarship and our teaching.

The panel features four papers and a response that explore these questions and approaches from various angles.

The panel will close with a response by Erika Zimmermann Damer, a scholar of sexuality, gender, and the body in the Roman world, followed by a period of discussion between the panelists and the audience.

Header Image: Mosaic of Ktisis ("Creation" or "Foundation") from Kourion in the bath of the House of Eustolios, 4thC CE  (Image via Flickr under a CC-BY-2.0).

Andrea Gatzke is Assistant Professor of History at the State University of New York at New Paltz. Her research focuses on issues of identity and self-presentation in the Greco-Roman world. She explore kingship ideology in the Hellenistic period and the Kingdom of Pontus, and looks at the use of language (particularly bilingualism) in the inscriptions and the urban landscapes of Roman Anatolia.