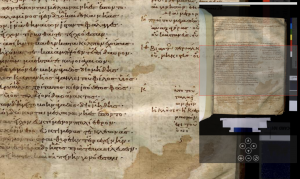 At its core, the HMT is a digital diplomatic edition of all the text and scholia of Venetus A, the oldest complete text of the Iliad in existence and the single most important source for ancient Homeric scholarship, spatially linked to high-resolution manuscript images. The HMT does not replace other editions of Homeric scholia, but offers a concentrated counterpoint to them. Erbse’s monumental edition of the Iliad scholia (1969–1988), for example, includes a substantial, but nevertheless selective, portion of the scholia in Venetus A. (For the majority of the scholia from Venetus A that are omitted from Erbse’s edition, one can now turn to van Thiel’s (2014) edition of the D scholia, available for download here.) Erbse’s edition is also expensive and not widely available outside of research libraries. The HMT is thus unique in its comprehensive, unadulterated, freely available, and searchable representation of the Iliad’s most important manuscript.

Though the HMT was created as an answer to Gregory Nagy’s call for an edition of the Homeric poems which would “encompass the full historical reality of the Homeric textual tradition as it evolved through time, from the pre-Classical era well into the medieval” (1997: 101), it is not yet anything like the variorum edition it aspires to become. It is, however, multitextual in two important ways. First, it provides high-resolution images of several important texts of the Iliad: Venetus A, Venetus B, Marciana 458 (=841), Escorial Υ 1.1, Escorial Ω 1.12, Genavensis 44, and the Bankes Papyrus. Venetus A and Venetus B are searchable on the manuscript browser, a tool which I discuss in more detail below. Second, it presents the text and extensive scholia of the Venetus A together in one searchable database. It is thus multitextual also in the sense that it includes, in addition to a text of the Iliad, the many variant readings preserved by the scholia.

The HMT is currently transitioning to a new platform, which means that its capabilities are currently spread out between the old site and its newer, more sophisticated descendant. Here I discuss the merits of each.

The original website, www.homermultitext.org, remains the port of call for manuscript images. The manuscript browser allows users to view high-resolution images from Venetus A and Venetus B, searchable by line number.

The folio can be examined in greater detail with a single click. If, for example, users are interested in the variant preserved at Iliad 2.4, they can zoom in to verify the transcription.

The Find Scholia tool is of particular utility, considering the difficulty of locating a specific scholion within a manuscript page. This tool enables users to view scholia by searching for the line to which they refer. If users search for the scholia to Iliad 1.4, for example, they will be shown, in addition to a transcription of the line in question, transcriptions of all scholia pertaining to that line, along with high-resolution images of the relevant portion of the manuscript.

If users click on the manuscript image in the Find Scholia tool, they will be shown the entire folio, with the relevant section of the manuscript highlighted in yellow.

In its newest iteration, www.homermultitext.org/cite-app, the HMT data is easier to browse, and it is now searchable as well. On the Browse Texts tab, users can query a selection from the Iliad or the scholia. In homage to ancient editorial practice, hyperlinked symbols are placed beside each line of text, directing readers to different kinds of supplementary material. The figure-eight (∞), which appears next to every line, links to the image of a particular verse in the Venetus A. Each asterisk (*) represents a scholion on a particular verse.

The Explore Texts tool makes possible a number of types of searches of the text and scholia of the Iliad contained by the Venetus A, or any subset therein. Users can search within “Whole Corpus” for results extracted from anywhere within the manuscript, both the Iliad and its scholia, or one can restrict the search further—to the main scholia or the interlinear scholia, for example. The stratification within the scholia based on their location on the page is particularly valuable, as it keeps distinct data whose difference is masked by transcription. The tool allows for token searches (proximity searches, in TLG terms), string searches (text searches, in TLG terms), and n-gram searches, which allows users to search the HMT data more freely.

Of the three, the n-gram search capability best reveals the strengths and weaknesses of the HMT in its current form. Conducting n-gram searches within individual sets of scholia provides telling snapshots of the distinct nature of each. A targeted n-gram search might, for example, reveal that the intermarginal scholia mention Aristarchus four times more frequently than Zenodotus, whereas in the main scholia their names occur with nearly identical frequency, and the exterior scholia never mention either one at all. Such findings help to make clear what is, for the most part, lost in transcription—how the spatial arrangement of scholia corresponds to the sort and source of the information they communicate.

As useful as this tool can be, it must be used with caution. If one were to conduct an n-gram query in the main scholia for phrases of three words (n=3) which occur with a frequency greater than 10, the results indicate that the phrase ὅτι Ζηνόδοτος γράφει is the most frequently recurring three-word phrase in the main scholia of the Venetus A, appearing 66 times altogether. A closer look, however, reveals that these 66 occurrences do not include the 20 occurrences of ὅτι Ζηνοδοτος γράφει. None of these results, moreover, gives any indication of occurrences of ὅτι Ζηνοδοτ γράφει (10x), ὅτι Ζηνοδ γράφει (6x), ὅτι Ζηνόδοτ γράφει (6x), οτι Ζηνόδοτος γράφει (1x), ὅτι Ζηνόδοτ γραφει (1x), ὅτι Ζηνόδοτος γραφ (1x), ὅτι ζηνοδ γράφει (1x), or ὅτι ζηνοδοτ γράφει (1x). Thus the initial figure represents only 60% of the ‘actual’ total—or, at least, the one most of us would be interested in.

This highlights some of the drawbacks of diplomatic transcription and, by extension, of the HMT. Along with the advantage of being able to see what the manuscript actually says, one is also faced with all the inconveniences that entails. It not only mitigates some of the utility of the new search capabilities, it also adds a layer of difficulty to texts which are often already remarkably opaque. Experienced readers are unlikely to be phased by most abbreviations and by inconsistencies of punctuation, accentuation, and spelling, but these are likely to serve as stumbling blocks for others, who will occasionally wish to take recourse to a modern edition of the scholia, where one exists.

The HMT has long had a treasure trove of data, but recent developments have opened up new avenues of access and analysis, making it a useful teaching aid and a valuable research tool as well.

Description: Searchable digital diplomatic transcription of the text and scholia of the Iliad manuscript Venetus A, spatially linked to high-resolution manuscript images.

Rights: The HMT website is copyright 2014, the editors and architects of the Homer Multitext project, licensed for free use under the terms of the Creative Commons Attribution-ShareAlike 4.0 International License. Linked data sets are copyrighted to their owners and licensed for non-commercial, scholarly use under a Creative Commons Attribution-Noncommercial-Share Alike License. All source-code is licensed under the General Public License. CITE/CTS is copyright 2002–2018 Neel Smith and Christopher Blackwell.

Bill Beck is a visiting assistant professor in the Department of Classical Studies at Indiana University, Bloomington. His research focuses on Homeric epic and its reception, particularly its scholarly reception in later antiquity. His monograph-in-progress, "The Narrative of the Iliad: Time, Space, and Story" is a narratologically-informed study of how the narrator’s representation of the Iliad’s story in time and space shapes interpretation. He is also engaged in a translation of the ancient scholia to the Iliad, "The Ancient Scholia to Homer’s Iliad: A Translation" (under contract with Cambridge University Press), and he is co-editing Exegesis, Interpretation, Dialogue: Reading the Iliad Scholia, to be published with the Bulletin of the Institute of Classical Studies. You can email him at rb14@iu.edu or find him on Twitter @GreekEtymology

04/03/2020
Blog: How Would Thucydides Have Recorded the COVID-19 Pandemic?
In his history of the long and costly war between Athens and Sparta, the historian Thucydides explained that he...
03/27/2020
Blog: Classics Everywhere: Bringing Science, Archaeology, and Creativity to the study of Classics
­­The Classics Everywhere initiative, launched by the SCS in 2019, supports projects that seek to engage...
03/20/2020
Blog: Working Together to Transcribe Ancient Documents During COVID-19
As the pandemic known as COVID-19 grips the globe, thousands of instructors in the United States and elsewhere...
03/12/2020
Blog: ‘Greater the Profit...When Two Go Together” [Il. 10.224-5]: Homeric Adventures in Collaboration and Open Access Publishing
By Joel P. Christensen and Elton Barker   How does one (er, a pairing) write a collaborative...
03/06/2020
Blog: Contingent Faculty Series: Addressing Vulnerability and Insecurity
Our second interview in the Contingent Faculty Series is with Ryan C. Fowler, who is currently Visiting Assistant...
END_OF_DOCUMENT_TOKEN_TO_BE_REPLACED