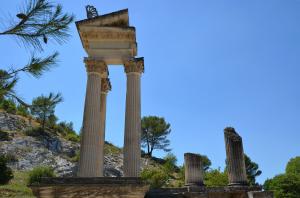 As an amateur photographer and ancient history enthusiast, I have spent countless hours exploring ancient sites throughout the Mediterranean. In the process, I accumulated a very large number of photographs that I wanted to archive, edit, and share with the world. In 2009, after 3 years of traveling, I decided to start uploading my photos to Flickr. This photo-sharing site was founded in Canada in 2004, and acquired by Yahoo and moved to the US in 2005. As of fall 2016, the site reportedly had 122 million users in 63 countries and was the repository of 10 billion images, with a million more added on an average day. Size and popularity, however, were not the reasons why I chose Flickr. I wanted a photo site that would allow me to edit, annotate, organize, and store my images. I was also looking for a platform that would allow users to easily browse and download my photos if desired; Flickr offered all of this.

At the time I joined, Flickr offered free membership with a limit of 100MB of storage, or a Pro membership for $24.95 for a year. I opted for the Pro membership as it included unlimited storage space and bandwidth, the ability to create collections and to archive high-resolution original images. In 2015, Flickr revised their membership program, creating three tiers of membership: free, Pro ($5.99) and Pro+ ($49.99). All members receive 1TB of storage, but Pro and Pro+ members enjoy an ad-free experience and can monitor view counts and statistics for their images. New features were introduced at the same time. Flickr’s old uploading and editing tools were replaced by Camera Roll, which has easy drag-and-drop tools for uploading photos, and lets users edit, tag, and select photos for publication in their Photostream. It used to be difficult to download my photos from Flickr en masse, but Camera Roll gave members the ability to bulk download their photos as .zip files. The redesign also included a new desktop app for Pro members, Uploadr. Uploadr lets me browse every photo on my computer, SD cards or external drives, and upload them into Flickr.

My Flickr page currently houses over 29,000 photographs. Each photo has been edited using Flickr's photo-editing tools, labeled with titles and descriptions, classified, and some have been tagged and geo-located.

Visitors to my Flickr page can scroll through my Photostream to view my recent uploads or browse my albums and collections. Albums and collections allow me to group photographs by location (such as cities, archaeological sites, and museums I have visited), but also themes like Greek art, Roman architecture, and Roman mosaics. Collections may contain multiple albums and even other collections. This is quite helpful when it comes to organizing my photos from countries like Turkey or Greece.

Some of my collections such as “Roman Emperors Portraits,” “Roman Art,” and “Greco-Roman Mythology” feature albums of individual photos on a particular theme. This is possible because photos can be assigned to multiple albums.

Grouping photos by theme or location provides structure and makes it easier for people to locate items that interest them. Flickr’s organizational tools are one of its greatest assets.

Photographers generally guard the copyright to their images. But I took my photographs intending to share them as widely as possible. Flickr facilitates sharing by allowing image owners to assign their work Creative Commons licenses. Thanks to the Creative Commons Attribution Share-Alike license (CC-BY-SA) anyone can download, use, or share my images via social media free of charge, so long as they provide proper attribution. Due to the Creative Commons license I selected, about 14,000 of my photographs have been added to Wikimedia Commons using the Flickr2Commons tool. People can download my images and use them free of charge from here too, so long as they credit me. This is how many of my photographs have been used to illustrate books, magazines, blogs, websites, academic papers and even documentaries. Another valuable type of sharing facilitated by Flickr involves Pleiades, the widely used collaborative gazetteer of the ancient Mediterranean. I have added tags provided by Pleiades to some of my Creative Commons licensed images. Clicking the associated link on the Pleiades entry for Epidauros, for instance, redirects users to a Flickr page aggregating all the images tagged with Epidauros’s Pleiades identifier.

Flickr, with its ability to organize images into albums and collections, is great for sharing quantities of images, but not for providing context; so, I decided to start my blog, followinghadrian.com. Through it, and my new site followinghadrianphotography.com, I am able tell other history fans all the amazing stories that I discover on my journeys. Still, Flickr is the best place for me to archive my photos. Its editing and organizational tools and Creative Commons licensing allow me to share photographs of sites from across the Roman world with ease.  Flickr allows me the satisfaction of being able to contribute modestly to the work of others, and for that I am grateful. To explore the ancient world on Flickr, check out my collections and, for example, the images of ancient coins posted by Joe Geranio, the active groups on Pompeii and Greek Mythology, the group Ancient (which has over 3,000 members), Ancient Greek Sculpture,  Ancient Greek and Roman Art, and the group created by the SCS.

(Header Image: Partial reconstruction of one of the geminated temples which opened onto the forum, Glanum, Provence, France. Image by Carole Raddato via Flickr. Licensed under CC BY-SA 2.0.)

Carole Raddato is a history enthusiast and maintains the ancient history photo-blog Following Hadrian, where she travels the world in the footsteps of the Roman emperor Hadrian. Carole tweets at @carolemadge and can be reached via email at madge@hotmail.fr.

04/13/2022
Blog: Two Years Later: “Classics” after Coronavirus?
In an April 2020 post for Eidolon, I gathered predictions on “classics after coronavirus.” Two years later, it’s...
04/08/2022
Blog: Ancient Worlds, Modern Communities: Increasing Accessibility for the Study of the Ancient World
The Ancient Worlds, Modern Communities initiative (AnWoMoCo), launched by the SCS in 2019 as the Classics...
03/21/2022
Blog: I Love You, I Hate You: A Student’s Perspective on Learning Latin
I have always enjoyed Latin class because it felt like a puzzle, much like math. Find the verb, find the noun that...
03/18/2022
Blog: Power to Punish and Authority to Forgive: Imperial State and Imprisonment in 4th-Century Antioch
Research ideas often develop out of chance encounters or unplanned circumstances. My dissertation project was born...
03/14/2022
Blog: Sampling Epic in Kendrick Lamar’s “Mortal Man”
Because it’s spirits, we ain’t even really rappin’ We just letting our dead homies tell stories for us....
END_OF_DOCUMENT_TOKEN_TO_BE_REPLACED