Blog: An Interview with John Ochsendorf, New Director of the American Academy in Rome 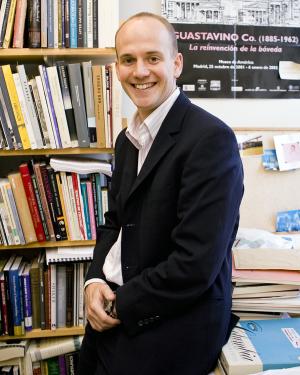 I recently sat down with John Ochsendorf, the new Director of the American Academy in Rome to discuss Classics, the American Academy in Rome, and his own work in historical preservation. He is the Class of 1942 Professor of Architecture and Civil and Environmental Engineering at MIT, was a Rome Prize Fellow in Historic Preservation in 2007-2008, and was named a MacArthur Fellow in 2008.

CB: You’ve just begun your time at the American Academy in Rome, which has such a rich history for the study of Classics. Can you speak about Classics and Ancient Studies at the Academy?

JO: For myself and many others at the American Academy in Rome, Classics is really at the heart of why we are here in Rome. Classics and Ancient Studies continue to speak to all of the fields that we have under our roof. The Academy offers programs in Classics every year such as the Classical Summer School, the Summer School in Latin Epigraphy, and the Winter School in Latin Paleography and Codicology.

The Academy has also evolved over the last century and our definition of Classics has evolved, as one hopes it would. The literature, material culture, history, law, art, and the influence of Rome through the ages are all part of the leading edge of scholarship, not just in Classics but in all our fields in the Humanities and Arts. For me personally, we always have to strike the balance between tradition and innovation. We all want to be part of living, breathing disciplines that are evolving over time and Classics is just like any other field in that certain strands of inquiry remain at the heart of Classics and yet new fields are opening up all the time. It is important to me that the Academy continue to be a home to meticulous and careful study in the most traditional sense but also a home for pushing the boundaries of what Classics is. My hope for the American Academy in Rome is that anyone who passes through our gate experiences the intellectual vibrancy that comes from interrogating the past deeply but also inventing the future by exploring the porous boundaries between disciplines.

CB: How do you see your own work in historical preservation interacting with Classics and Ancient Studies?

JO: Though I am not strictly trained as a classicist, my work has always been in dialogue with Classics and Archaeology. When I was an undergraduate at Cornell I minored in Archaeology which had a big influence on me because it showed me that many questions cannot be answered by any one discipline. Close collaboration between different disciplines bringing different skills can help make breakthroughs in our understanding of the ancient world. Ultimately, I decided to continue my graduate studies not in Archaeology but in Engineering, studying pre-industrial construction conditions so that I could offer more to the field of Archaeology. My work aims to understand how historical architecture was created and built but also to understand how to preserve cultural heritage sites for the future.

What I found in over twenty years of working together with archaeologists is that we have real problems around authenticity and conservation and what we might call the progress ideology of new materials, with contemporary materials often being assumed to be superior to ancient materials. If you look at sites from Pompeii to the Roman Forum, you see examples of new materials provoking damage to ancient fabric. In particular, the widespread use of reinforced concrete in the 20th century at archaeological sites in many cases is causing irreversible damage. My life’s work has been dedicated to preserving and understanding traditional masonry construction in collaboration with art historians, archaeologists, and other conservators.

CB: How does being at the American Academy in Rome contribute to your work?

JO: There is no better place to be than Rome for working on conservation. It is at the heart of the challenges around preserving archaeological sites. In this environment of fear for the safety of a monument we always have to take the long-term view. I often find that interventions in historical monuments sadly think only in terms of decades, but we have to think in terms of centuries and millennia. My work in collaboration with Classicists and Archaeologists has largely been interested in the preservation of archaeological sites. Simultaneously, as a scholar and designer, I also learn from the traditional Roman methods of construction in order to invent new design projects of the future. Because of these interests, I feel equally at home in the School of Fine Arts in dialogue with our artists as well as in dialogue with our scholars of the School of Humanities here at the Academy as we work together in the city of Rome.

CB: What sort of goals and projects do you envision happening at the American Academy in Rome during your time as Director?

JO: It is really a privilege to be able to step in as Director after Kimberly Bowes, as the Academy is operating so well from her tenure that it lets me think about some new goals for the Academy, a few of which I am happy to share. My first goal is to continue to strengthen the tradition of cross fertilization between the Arts and the Humanities. For example, we have the Fellows’ Project Fund to support public projects of Fellows, particularly those that are in dialogue with more than one discipline. A second goal involves giving back more to Rome than we take by offering programming, conferences, and exhibits here at the Academy and also by encouraging our Fellows to participate in activities at other institutions and with Italian partners in Rome and Italy. Another goal is the development of a long-term energy strategy for the Academy campus as we have a responsibility as a global institution to think about climate change and how we at the Academy are part of the solution and not part of the problem.

CB: Finally, what is your favorite site in Rome?

JO: That is a hard question, but in my case, it is very easy to answer. It is, predictably, the Pantheon, because the Pantheon represents everything that is important about the Humanities for me. It is an enduring mystery. We will never fully understand the Pantheon. It evokes wonder and gives you a glimpse into a world that no longer exists, and yet the Pantheon exists. And every time you walk through the portico of the Pantheon and you come face to face with a monument that has quietly stood for nearly twenty centuries through so many events of world history, it never fails to evoke awe and wonder. Every time I return to Rome it is the first place I go. Every first time visitor to Rome I take there. And every time I go to the Pantheon I see something new. I think it is the greatest building of all time. And I think it continues to offer us many opportunities to stare into the great unknown and to ask what we can learn from it.

For more on the American Academy in Rome and their programs in Classics and Ancient Studies, see http://aarome.org/.

07/01/2022
Blog: Ancient Worlds, Modern Communities: Contemporary Responses to Greek Myth and Tragedy through Drama, Film, and Visual Art
The Ancient Worlds, Modern Communities initiative (AnWoMoCo), launched by the SCS in 2019 as the Classics...
06/29/2022
Blog: “Deeply rooted in history”: Teaching abortion ancient and modern in a post-Roe v. Wade world
With weary hearts, we consider with you what Classics can do in the face of Dobbs v. Jackson Women’s Health...
06/27/2022
Blog: Teaching in a Time of Anti-Asian Violence: Reflections on Asian & Asian American Experiences in Classical Studies, Part 1
This two-part series reflects upon AAPI experiences in Classical Studies. Part 1 is catalyzed by the author’s...
06/25/2022
Blog: Roe v. Wade, the GOP, and echoes of Augustus: Reproducing fascism
I guess I should say “thank you.” Gratias vobis ago. Thank you to the Republican Party’s long game, a partisan...
06/20/2022
Blog: Paternalism and the “Good Slave” in the Speech for Phormion and the Legacies of Slavery
In a discussion of the concept of the “good slave” in her book Reconstructing the Slave: The Image of the Slave in...
END_OF_DOCUMENT_TOKEN_TO_BE_REPLACED