Blog: The Jewish Holiday of Purim in the Late Roman Empire 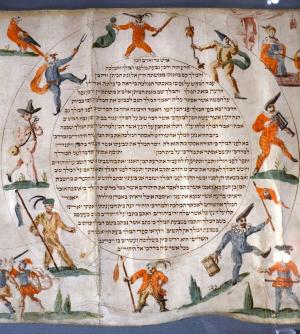 In her monthly column, Catherine Bonesho will feature discussions of Greco-Roman age Judaism, the Roman Near East, as well as the American Academy in Rome. For her first monthly column, she explores the Roman context for the Jewish holiday of Purim.

According to historian Amnon Linder, there are approximately 107 imperial Roman laws that concern Jews and Judaism and, for the most part, one can find them in the Theodosian and Justinianic Codes.[1] Roman imperial legislation on Jews and Judaism ranges from discussing circumcision to synagogues and the Sabbath, among other topics. However, one can also find a peculiar law, dating to the early fifth century CE, that establishes Roman policy on the Jewish holiday known as Purim.

This year Purim will be celebrated at sundown on February 28. In this blog, I focus on a Roman law found in the Theodosian Code (16:8:18) that deals with the celebration of Purim and briefly discuss how this law not only aids in understanding Jews and Judaism in Roman antiquity, but also how it helps decipher religious competition during the period known as Late Antiquity (200-800 CE).

The Book of Esther, also known as Megillat Esther, provides the foundation narrative for the holiday of Purim and centers on the figures of Esther and her guardian Mordechai. According to the Book of Esther, Purim commemorates Esther’s and Mordechai’s efforts to prevent the persecution of Jews at the hands of a Persian official known as Haman. The author of the Book of Esther claims then that Jews should observe Purim:

as the days on which the Jews gained rest from their enemies, and the month which had been turned from sorrow into joy and from mourning into a holiday for them so that they observe days of feasting, joy, and sending portions to one another and gifts to the needy (Esther 9:22).[2]

According to the Book of Esther, the villain Haman, after concocting to massacre Jews throughout the Persian Empire, is himself inevitably executed by hanging on the very gallows he built to execute Mordechai. The Roman legislation transmitted within Theodosian Code 16:8:18 mentions the holiday of Purim and supposedly forbids certain Jewish rites associated with its celebration, including the hanging up and burning of an effigy of Haman. The law, promulgated on May 29, 408 CE reads:

The two Emperors and Augusti Honorius and Theodosius to Anthemius, Praefectus Praetorio:

The governors of the provinces shall prohibit the Jews from lighting fire to Haman [spelled Aman] in memory of his past punishment, in a certain ceremony of their festival, and from burning with sacrilegious intent a form like the kind of the saint cross in contempt of the Christian faith, so that they do not mix the sign of our faith with their jokes and they shall restrain their rites from the contempt of Christian law, for they are bound to lose what had been permitted to them until now unless they abstain from that which has been forbidden.

Given on the fourth day before the Kalends of June at Constantinople, in the consulate of Bassus and Philippus.

Although this law does not explicitly mention Purim, the mention of the villain Haman of the Book of Esther indicates that the law discusses a specific Jewish rite associated with Purim. The Roman lawmakers claim that some Jews, in their celebration of Purim, are mocking Christianity by using a cross as part of their ritual hanging and burning of an effigy of Haman.

We cannot write social history from prescription. So, for example, it is important to note, as scholars have done, the ever shriller rhetoric of imperial legislation about the Jews, in part because deepening imperial hostility, and the episcopal hostility that influenced it, are important per se, as expressions of official ideology.[3]

The Theodosian Code’s law on Purim too reflects imperial ideology, specifically after the Christianization of the Roman Empire. The charge found in the law that Jews were mocking the cross, as well as the other slanderous accusations, indicate the Christian legislators’ interest in promoting their own version of Christianity vis-à-vis Judaism. The Roman legislation on the Jewish holiday of Purim then not only tells us about Purim in antiquity, but also about the strenuous efforts of Christian lawmakers to disparage other groups, illuminating religious competition in Late Antiquity.

(Header Image: Manuscript of Megillat Esther, dating to the 18th century and currently housed in the Joods Historisch Museum in Amsterdam. Photo by Vassil via Wikipedia, licensed under CC0 BY 1.0. Edited (cropped) by C. Bonesho.)

[2] All translations are my own.

07/10/2020
Blog: What Parts of Classics Would We Choose To Preserve for the Future?
In light of the present administration’s brazen disregard for facts and the public good, you’ve got to admire past...
07/03/2020
Blog: What Are the Best Classics Books for Children?
Finishing my third trimester in the midst of a pandemic was not what I had planned for the last months of...
06/26/2020
Blog: Can Studying Classics Encourage Empathy and Equity?
The new Classics Everywhere initiative, launched by the SCS in 2019, supports projects that seek to engage...
06/19/2020
Blog: Creating a Coalition to Empower Classicists of Color
In 2018, a group of scholars founded Mountaintop Coalition, an SCS-affiliated group with a shared interest in...
06/12/2020
Blog: Women in Classics: Froma Zeitlin
Froma I. Zeitlin retired from Princeton University in 2010, where she was the Charles Ewing Professor of Greek...
END_OF_DOCUMENT_TOKEN_TO_BE_REPLACED

END_OF_DOCUMENT_TOKEN_TO_BE_REPLACED
Calls for Papers
CFP: Myths and Societies: A Cross-Cultural and Intertemporal Approach