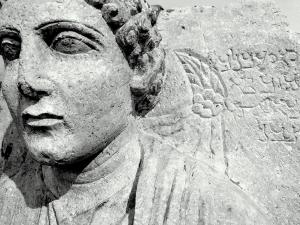 Though these inscriptions are usually from the ancient city of Palmyra, they can also be found throughout the ancient Roman world, including Roman Britain and in the city of Rome itself. In fact, some feature bilingual and trilingual inscriptions with Latin and Greek texts that range from funerary inscriptions to dedicatory altars.

As part of WPAIP, my colleagues and I apply the photographic technique known as Reflectance Transformation Imaging (RTI). The technique has been used to digitize and analyze various objects, from graffiti found at Herculaneum (Herculaneum Graffiti Project) to fossils. In this blog post, using examples from WPAIP’s digital collection, I briefly discuss the process of performing RTI and its value for the study of ancient objects.

Developed by researchers at Hewlett-Packard, RTI technology creates the ability to manipulate the direction of a light source digitally in real time. In addition to preserving a high-quality image of an object, RTI technology can reveal details and intricacies of an object unseen to the naked eye. Organizations such as the Cultural Heritage Imagine Project and the West Semitic Research Project housed at the University of Southern California have promoted RTI technology through education and development, as well as training programs. For more on the history, technology, and development of RTI, as well as downloads of programs necessary for the performance of RTI, check out Cultural Heritage Imaging and Hewlett-Packard Labs.

WPAIP has performed RTI on over thirty Palmyrene Aramaic inscriptions housed at various museums and collections. In my brief description of how to perform RTI, I include photos from previous sessions to best show the space and equipment required. In order to produce an RTI image of an object, a digital camera is stabilized on a tripod a distance from the object. With a stationary camera, a light source or flash separate from the camera is moved in a dome like structure around the object. A series of photographs are then taken (usually at least forty-five) at each new placement of the flash around the object. With each photo taken, the position of the flash changes, resulting in a series of images with the exact same field of vision of the object but illuminated by the flash from a variety of directions, essentially creating an imaginary dome of light over the object. This series of photographs is then compiled and processed using specialized software (available via open access) into a single file that is then able to be viewed in a program known as RTI Viewer (available for download from Cultural Heritage Imaging).

RTI technology gives researchers the ability to move around light on a digital representation of an object, such as a Palmyrene funerary bust. RTI technology thus can illuminate details unseen to the researchers in conventional photography. With an RTI image of an object, it is almost as if researchers have access to the object itself, with the ability to move the light around the object to illuminate details via raking shots with the move of their computer mouse, instead of in real-life.

For example, WPAIP’s digital humanities project provides photos of a Palmyrene funerary bust with an inscription, known as Palmyrene Aramaic Texts 908.[1] The inscription is currently housed at the Yale University Art Gallery (catalogue no. 1954.30.1). The first image (left) depicts the entire object using conventional photography, with the light source front and center on the funerary bust. The second image (center) shows a close-up of the Palmyrene Aramaic inscription once again with the flash front and center on the inscription. The third image (right) is a capture of an RTI image of the inscription, with the light source raking from the right-hand side of the bust’s direction.

As this example illuminates, the ability to manipulate light in real time via RTI technology gives researchers better access to the details not only of inscriptions but also of other details of the object, including the portraiture of Palmyrene busts and their material. The raking shot (right) captured from RTI provides details of the inscription otherwise inaccessible from the conventional photos, aiding in the decipherment of the inscription. Almost all of the objects included in WPAIP’s digital collection have been photographed with RTI technology. WPAIP’s use of RTI not only provides high quality documentation of Palmyrene Aramaic inscriptions, but also helps to access details of the inscriptions not usually available to scholars who do not have immediate access to an object. RTI thus provides a digital means of preserving an object beyond a mere photograph and then allows digital humanists to disseminate images that can allow anyone in the world to study these inscriptions. Recent efforts to preserve Palmyra's precious monuments have already demonstrated the impressive ways in which digital methods like 3D modeling can preserve cultural heritage for the next generation, but the myriad inscriptions that tell us of the life and death of Palmyrenes is similarly significant.

To see other Palmyrene inscriptions included in WPAIP’s collection, check out https://uwdc.library.wisc.edu/collections/wpaipcoll/

04/13/2022
Blog: Two Years Later: “Classics” after Coronavirus?
In an April 2020 post for Eidolon, I gathered predictions on “classics after coronavirus.” Two years later, it’s...
04/08/2022
Blog: Ancient Worlds, Modern Communities: Increasing Accessibility for the Study of the Ancient World
The Ancient Worlds, Modern Communities initiative (AnWoMoCo), launched by the SCS in 2019 as the Classics...
03/21/2022
Blog: I Love You, I Hate You: A Student’s Perspective on Learning Latin
I have always enjoyed Latin class because it felt like a puzzle, much like math. Find the verb, find the noun that...
03/18/2022
Blog: Power to Punish and Authority to Forgive: Imperial State and Imprisonment in 4th-Century Antioch
Research ideas often develop out of chance encounters or unplanned circumstances. My dissertation project was born...
03/14/2022
Blog: Sampling Epic in Kendrick Lamar’s “Mortal Man”
Because it’s spirits, we ain’t even really rappin’ We just letting our dead homies tell stories for us....
END_OF_DOCUMENT_TOKEN_TO_BE_REPLACED