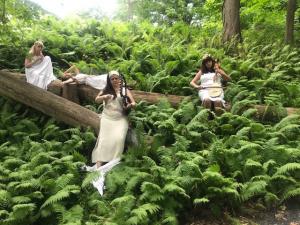 First, Angel Parham presented Nyansa Classical Community (NCC), which started in 2015 as an after-school program in New Orleans that aims to introduce students of color to Classics (Nyansa is an Akan word meaning “wisdom”). During the pandemic, NCC decided to create an elementary school curriculum on Greek myth, a long-term program that they are currently piloting all over the USA and Uganda. AnWoMoCo funding was used to create Black and brown images of Greek goddesses, so that the children taking their curricula could also see themselves in the mythological figures. Other exciting activities include rewriting versions of Greek myths and a poetry booklet authored by the children in the program. We’ve already talked about setting up a booth at next year’s annual meeting so that people can get their hands on this beautiful volume. 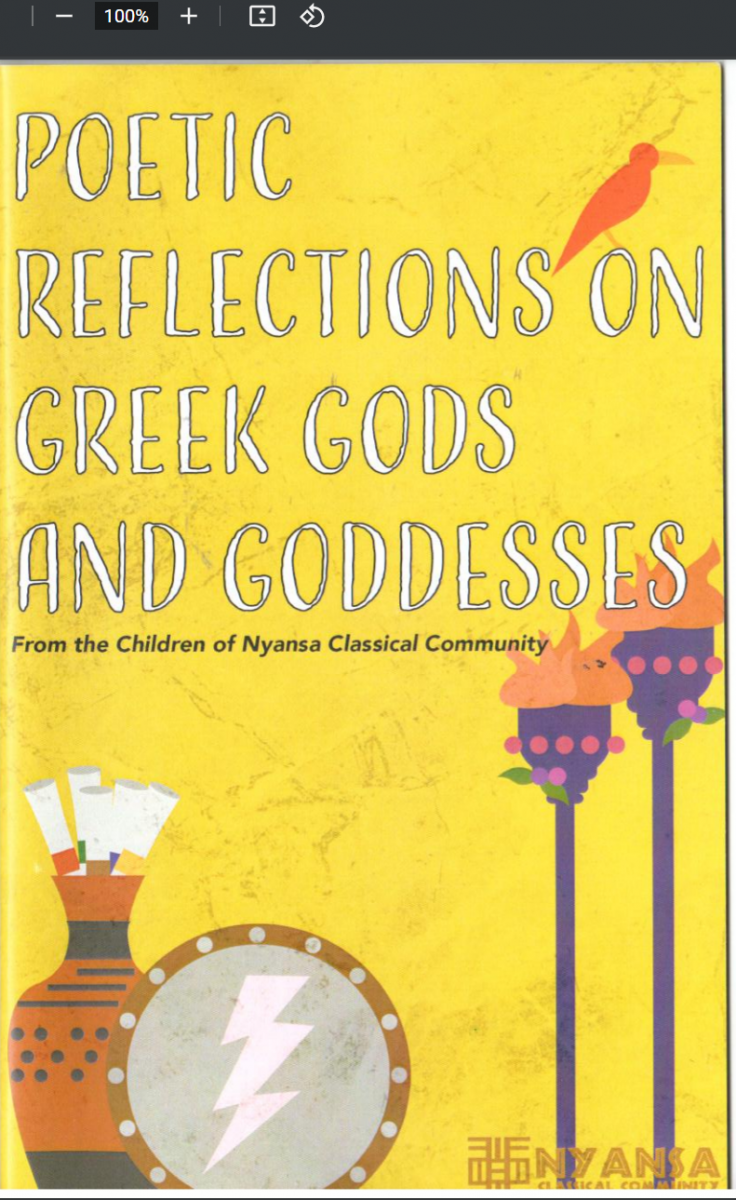 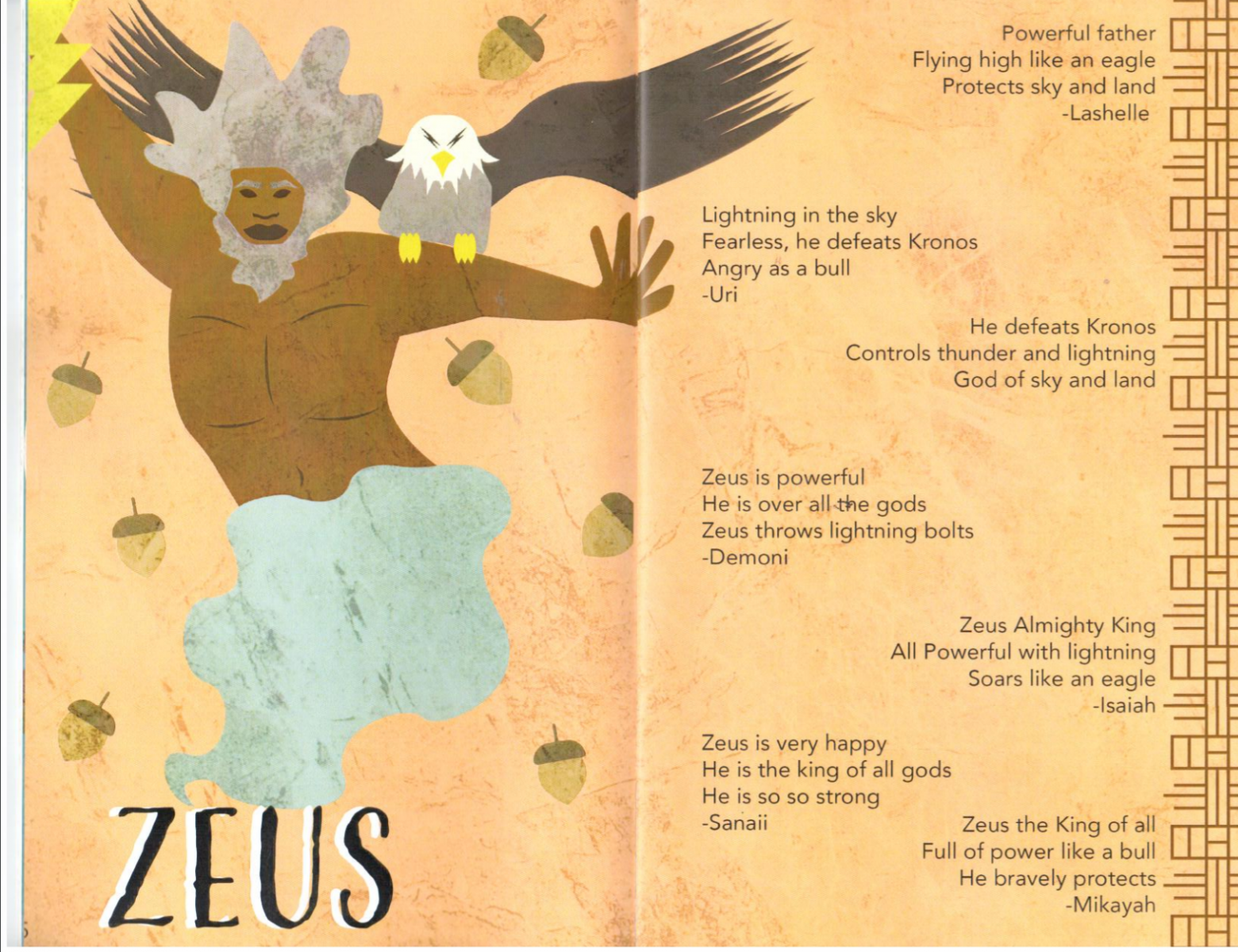 Figure 2. The pages about Zeus in the Nyansa Classical Community Poetry Book. Photo by Angel Parham.

Next up was Michael Okyere Asante, joining us from western Africa. He spoke about public perception of the Classics in Ghana and how he has had to address negative opinions of Classical Studies as a discipline, since it has (not unfairly) been considered colonial by many Ghanaians. Asante used AnWoMoCo funding to organize an event called “Global Classics and Africa: Past, Present, and Future,” which — of course — had to pivot online because of the pandemic. Regardless, Asante was able to engage in important conversations about Classics in sub-Saharan Africa, including discussions on the role of classical antiquity for people of African descent, and to continue his work to change the public perceptions of the field.

For more on the Nyansa Classical Community and Global Classics in Africa, click here. 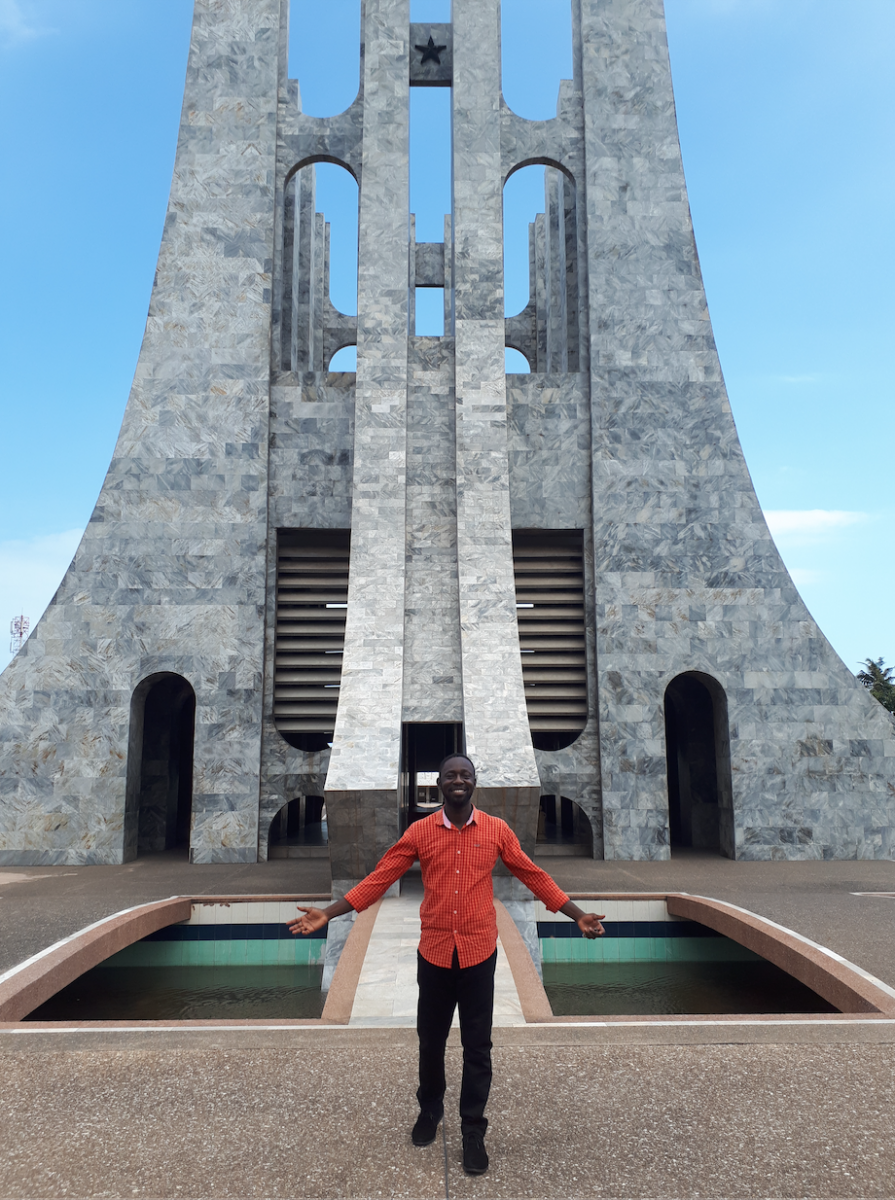 Third, Nebojsa Todorovic spoke about teaching an intensive elementary Latin course to nine inmates in a Connecticut prison as a part of the Yale Prison Education Initiative at Dwight Hall. One of the most fascinating aspects of his talk was how the specific language of Latin texts was received, discussed, and analyzed in a non-traditional classroom space, especially one in which existing systems of power are especially relevant. For more about his experiences, including testimonia from the students, see here.

The fourth presentation was delivered by Stephen Scully, who brought the Martha Graham Dance Company from New York City to Boston University to perform a show affectionately referred to as Graham’s Greeks. The event was a “lecture-demonstration” that consisted of a discussion, a screening of archival footage, and a performance of a piece called Errand: a reimagining of the myth of Ariadne and the Minotaur that centers on women’s strength and victory. Scully’s motivations were to challenge the traditional ideas of the relationship between scholarship, art, language, and dance. The stills of the show are absolutely breathtaking. 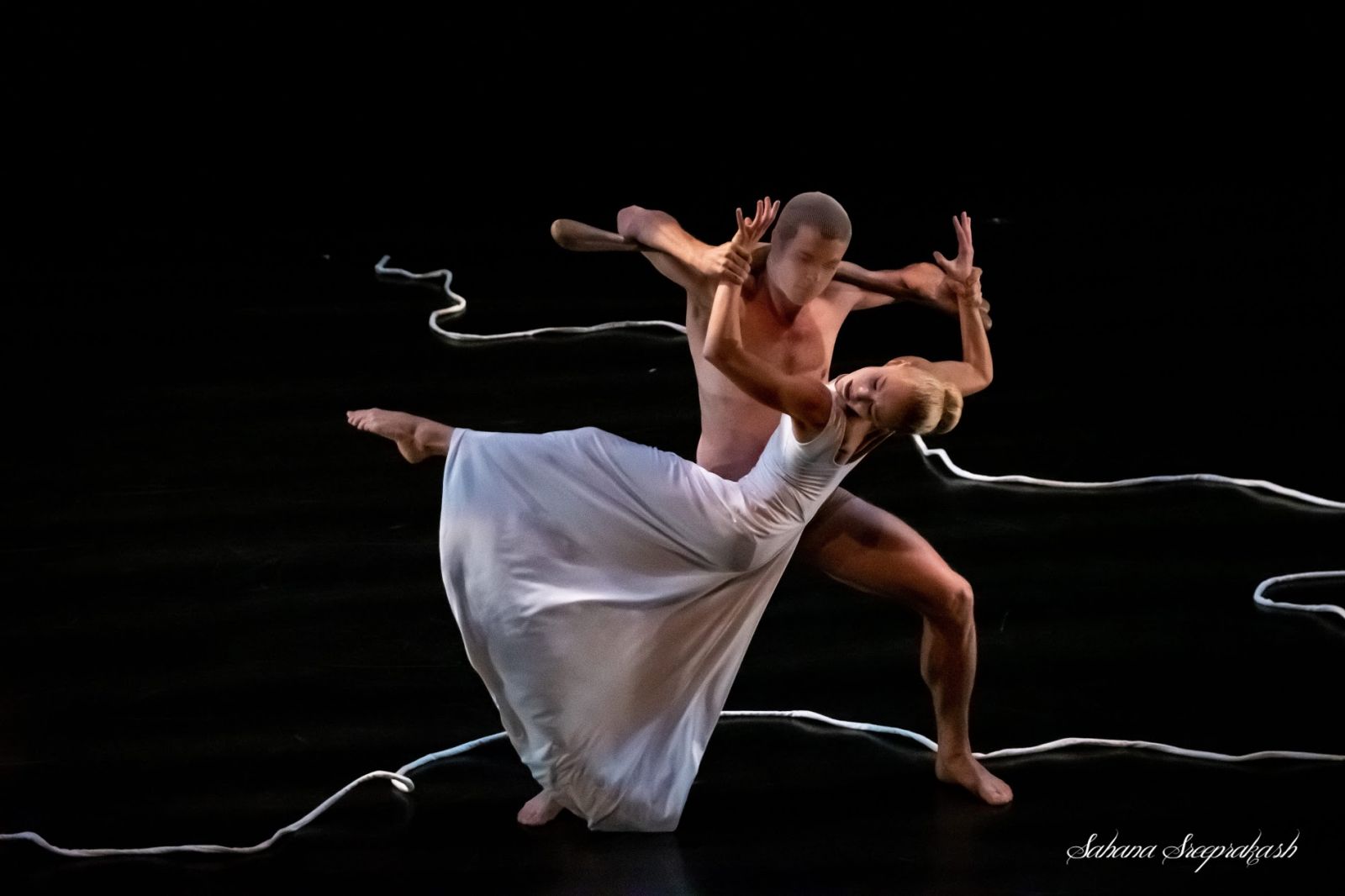 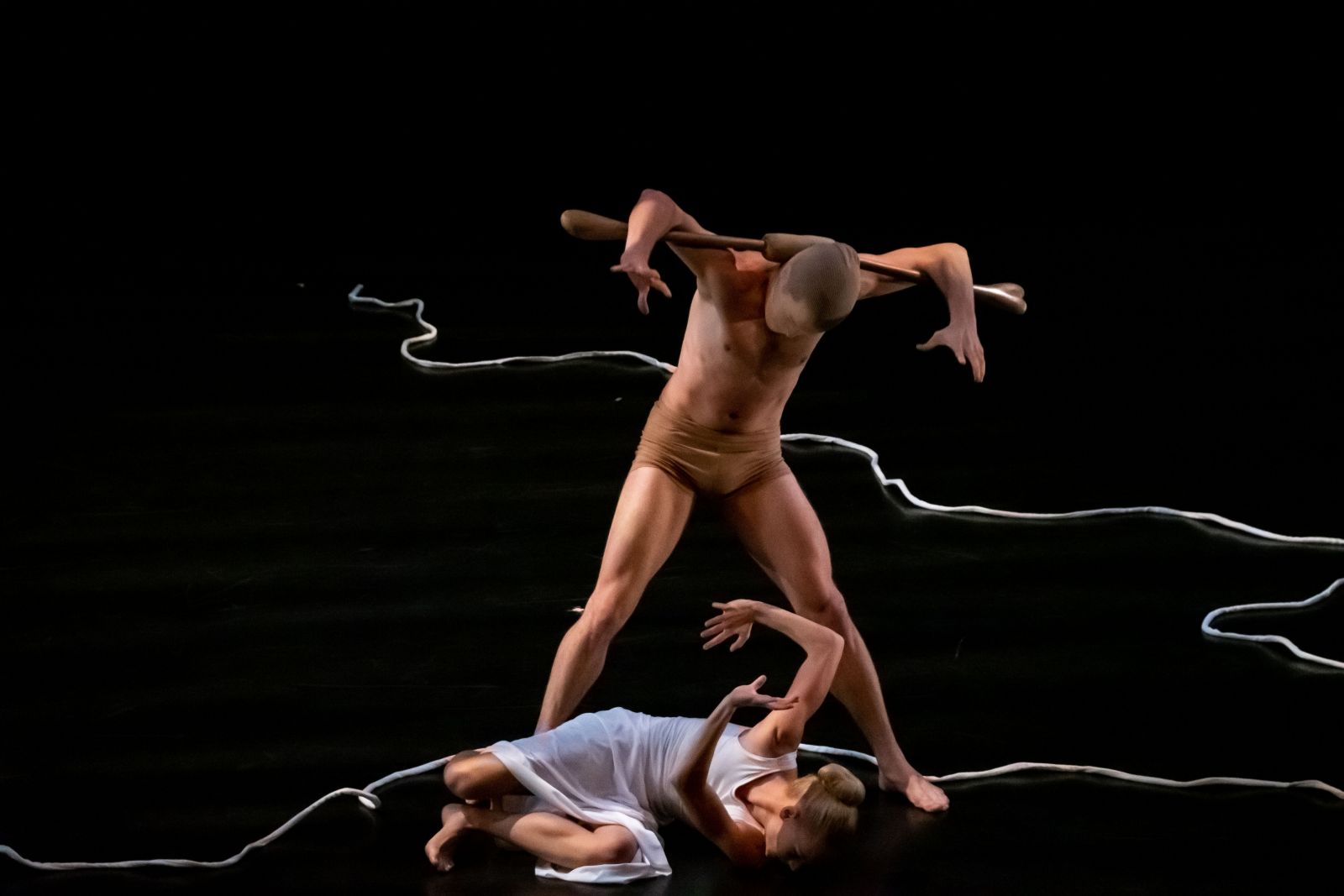 Figures 4 and 5. Charlotte Landreau and Lloyd Mayor as Ariadne and the Minotaur in Martha Graham’s Errand, presented at BU in October 2019. Photos by Sahana Sreeprakash.

The fifth presenters on the AnWoMoCo panel were Cheri Magid and Milica Paranosic, a librettist and composer team who created the chamber opera Penelope and the Geese, a retelling of Penelope’s story that gives her a leading role and her own sexual agency. The opera takes place after Odysseus’ return: while he sleeps, Penelope relives her experiences in his absence. The show has an all-woman cast. No men characters are present; the “sleeping Odysseus” is just a pile of blankets on stage. Penelope and the Geese is a story for the women of Homer’s Odyssey, since the creators rightly state that we’ve heard enough from the men characters. Unfortunately, the opera was scheduled for 2020, so they also had to pivot, but check out their audio recording and video trailer here, and follow @penelopeandthegeese on Facebook & Instagram for updates (and to get some great merch that may also make an appearance at a future SCS). 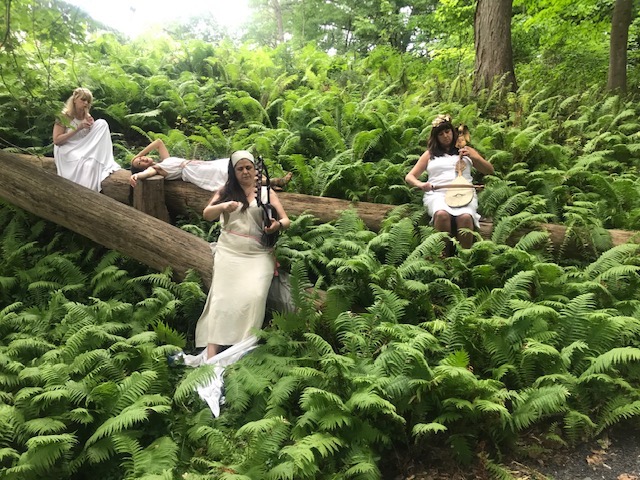 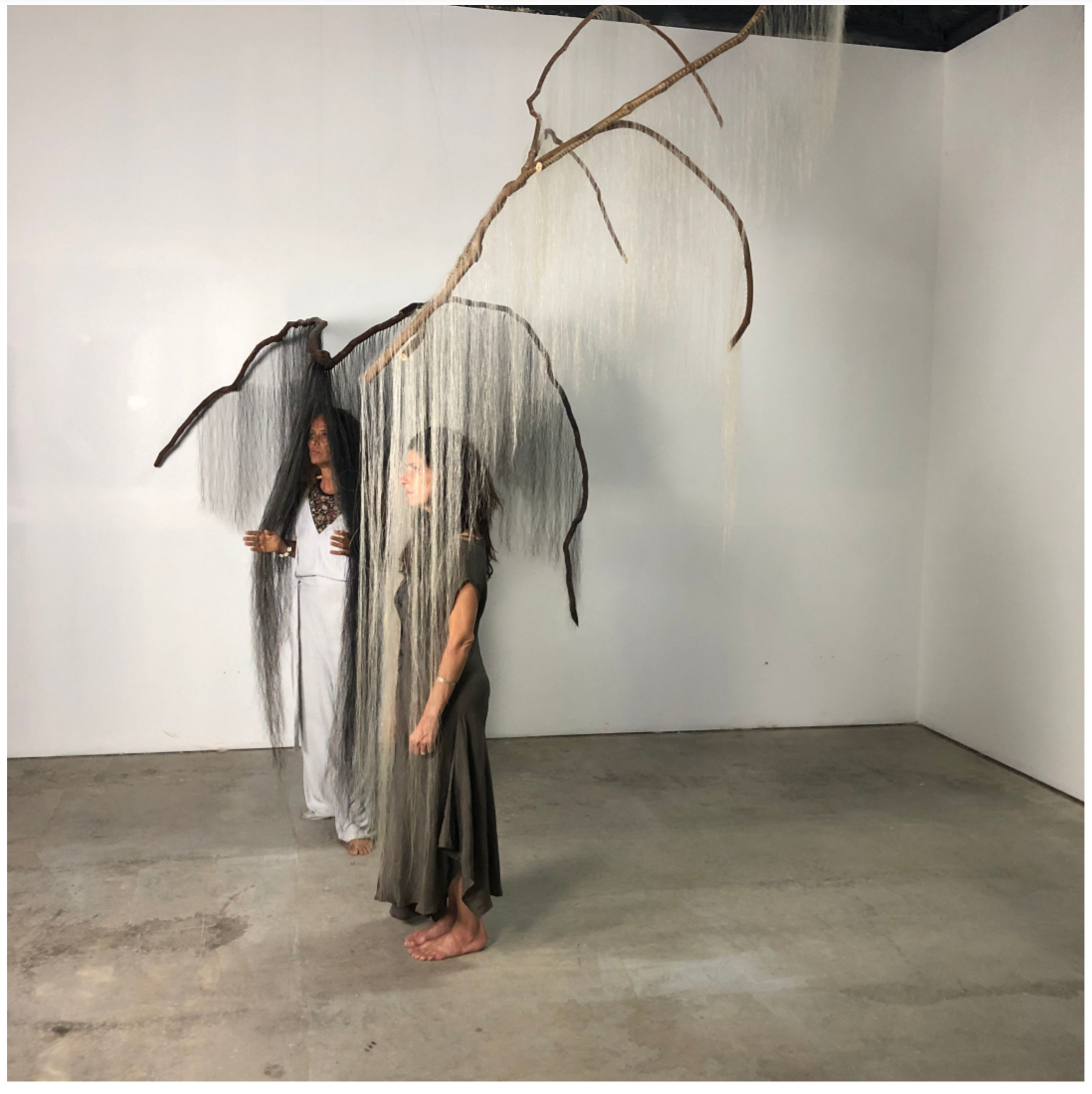 The penultimate presentation was delivered by Clara Bosak-Schroeder on behalf of their work with Amy Powell, Nancy Davidson, and Lakshmi Ramgopal on the Hive Art Exhibition at the University of Illinois Urbana-Champaign. The exhibit included Davidson’s sculptures that evoked and reinterpreted the Karyatids from the Parthenon and the cult statue of Artemis of Ephesus. Hive had audio accompaniment composed by Ramgopal that asked visitors to consider what we mean by the words “young,” “female,” and even “human.” AnWoMoCo funding helped with the installation of the exhibit, which opened right before pandemic-related shutdown — and which Bosak-Schroeder called a “last hurrah.” Lots of people worked to turn this project into a reality, and it is visually stunning. Click here for more on the Hive Art Exhibition. 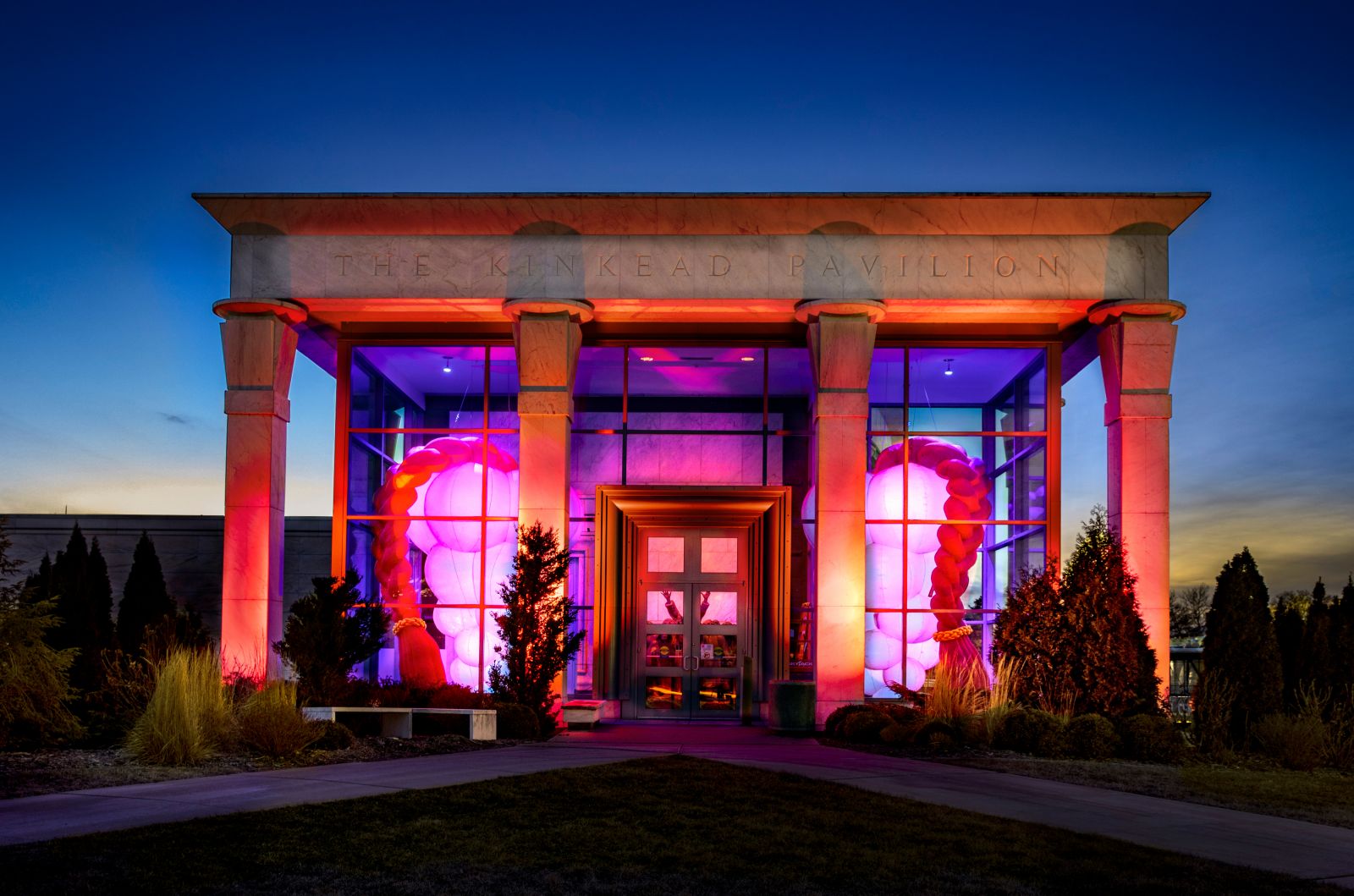 Finally, Christine Johnson and I wrapped up the panel with a presentation about the Peopling the Past project that hosts free, open-access resources for teaching and learning about real people in the ancient world and the people who study them. In contrast to some of the other projects that were postponed or altered due to the pandemic, PtP exists precisely because of the pivot to online learning. The project founders wanted to create resources that helped educators access free, high-quality content showcasing cutting-edge research about the ancient Mediterranean world. We have blog posts and videos on our website, and the first two seasons of our podcast are available on Spotify and Apple Podcasts. We are currently recording our third season of the podcast, on the topic of Women in the Ancient Mediterranean, so stay tuned for that to be released in June.

Figure 9. Peopling the Past podcast logo, designed by Nadia Alam.

AnWoMoCo’s first academic panel at the SCS annual meeting was a resounding success, and it was a privilege to be part of a group of people who are implementing exciting initiatives that break down barriers to scholarship and knowledge on Classics-related topics. The panel amplified the voices of those doing important work in the areas of Classics and ancient Mediterranean Studies outside of the university classroom, offered practical information on project development and implementation that will hopefully inspire others looking to do similar work, and initiated a dialogue between academic professionals in the field of Classics and leaders in community projects.

The organizers, Nina Papathanasopoulou and Lauren Ginsberg, Chair of the Classics in the Community Committee, deserve credit for successfully bringing together this diverse group of scholars, artists, musicians, students, and educators — all of whom share the common goal of making Classics-related content more broadly available and accessible. Every one of these projects is worth checking out and might inspire readers to begin their own.

The Ancient Worlds, Modern Communities microgrants program has been awarding funding since 2019 to: projects that focus on ways to engage with ancient Mediterranean culture that have been excluded from classics curricula; initiatives proposed by rather than for historically underrepresented minoritized communities; interdisciplinary collaborations; artistic and creative adaptations; collaborations involving global reception and comparative approaches; and projects that are critical of Classics as it has been practiced and structured as a discipline.

Ultimately, these grants continue to support those who are engaged in critical discussion of and creative expression related to the ancient Mediterranean, the global reception of Greek and Roman culture, and the history of teaching and scholarship in the field of Classical Studies. To apply for the next round of funding (deadline May 2022), please click here.

Chelsea Gardner (@archaeoctopus) is an Associate Professor in the Department of History and Classics at Acadia University. She is also an archaeologist who works in the Mani peninsula in southern Greece, and is involved in various projects related to scholarship and pedagogy of the ancient Mediterranean, including Peopling the Past, Women in Antiquity, Rhea Classical Reviews, and the CARTography Project.

04/13/2022
Blog: Two Years Later: “Classics” after Coronavirus?
In an April 2020 post for Eidolon, I gathered predictions on “classics after coronavirus.” Two years later, it’s...
04/08/2022
Blog: Ancient Worlds, Modern Communities: Increasing Accessibility for the Study of the Ancient World
The Ancient Worlds, Modern Communities initiative (AnWoMoCo), launched by the SCS in 2019 as the Classics...
03/21/2022
Blog: I Love You, I Hate You: A Student’s Perspective on Learning Latin
I have always enjoyed Latin class because it felt like a puzzle, much like math. Find the verb, find the noun that...
03/18/2022
Blog: Power to Punish and Authority to Forgive: Imperial State and Imprisonment in 4th-Century Antioch
Research ideas often develop out of chance encounters or unplanned circumstances. My dissertation project was born...
03/14/2022
Blog: Sampling Epic in Kendrick Lamar’s “Mortal Man”
Because it’s spirits, we ain’t even really rappin’ We just letting our dead homies tell stories for us....
END_OF_DOCUMENT_TOKEN_TO_BE_REPLACED