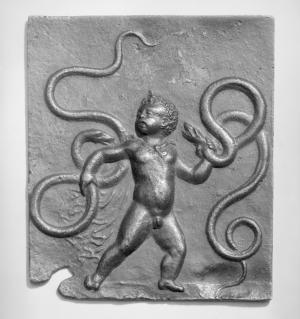 What is the role of graphic novels in teaching the ancient world to students? Prof. Chris Trinacty addresses this question and reviews two recent additions to the genre: Rome West and The Hero (Book Two).

Two recent graphic novels touch upon the ancient world in fascinating ways. The first, Rome West, by Justin Giampaoli, Brian Wood, and Andrea Mutti provides an alternative history of the world predicated on the idea that a lost legion of Roman soldiers make landfall in North America in the year 323 CE. The second, The Hero, published by Dark Horse Comics in two volumes is a creative take on Heracles’ Twelve Labors that offers a mash-up of modern celebrity culture, science fiction tropes, ancient archetypes of heroism, and the visual iconography of Heracles especially from Greece vase painting.

Of course, there has been plenty of fine writing by Classics scholars on the intersections of the ancient world and graphic novels/comic books (see especially the two collections Comics and Classics and Son of Comics and Classics), on the application of some of the tenets of sequential art to the ancient world, and, of late, one can continue to find impressive contemporary receptions of the ancient world like The Infinite Horizon and Ody-C (both updated takes on Homer’s Odyssey), the Orpheus and Eurydice arc of The Unwritten, Peplum (an impressionistic echo of Petronius’ Satyricon), Three, which details Sparta/helot relations in the 4th C. BCE, Frank Millers’ current run about Xerxes, and the more straightforward series devoted to the Greek Pantheon by George O’Connor.

Rome West begins with a Roman fleet floundering in an epic storm at sea. Further parallels with the Aeneid inform the opening chapter in which the general, Valerius, finds himself and his surviving men shipwrecked on a strange shore and in need of aid. This shore, however, is not that of Carthage, but of the island of Manhattan, and thus begins a radical reimagining of the history of the “New” World as an amalgam of Native American and Roman ideologies, religions, and concerns. Both the Romans and the Lenape tribe benefit from the treaty brokered on the shore, and the authors do a nice job showing how concessions and “soft” imperialism work to establish a unified society.

Again, using the Aeneid as a lens, one can imagine a similar result if the hoped-for peace between Latinus and Aeneas had transpired without the war incited by Juno, Amata, and Turnus. The peace in Rome West, however, does not last as expansion leads to war with various other tribes, and Roma Occidens soon experiences internal discord that mirrors both Roman history (the new country is a Republic, but certain elite families have the majority of the power) as well as issues in American history with immigration, citizenship, the frontier, and even the vexed importance of the military industrial complex coming into play. The scope of the work is ambitious; through vignettes it covers well over 1500 years and locations from the Panama canal zone (dug by the Romans in the 16th C.) to Lake Tahoe to Newfoundland and touches upon major themes of revolution, expansion, and memory (a nice moment features a father relating a new nursery rhyme – no longer is it “In August 1492, Columbus sailed the ocean blue…” but now “The Romans sailed the deep blue sea, to the continent of Atlanta in 323”).

At times, the vignette format leads to situations or details that I would have liked to see explored in more detail, and certain stories work better than others. The authors clearly enjoy imagining first contact scenarios for these “Romans” whether skirmishes between Viking warriors and a legionary post, or first contact with Columbus and his men, who discover an advanced population speaking Latin, dwelling in a city full of gold and silver, and in no mood to give up their territory. Columbus, imprisoned, acts like Croesus or one of Herodotus’ other wise advisors and he informs these Romans that future explorers will be better armed and will pursue war: “There’s no need for a second Roman Empire to fall”. Spanish conquistadors such as Hernando de Soto and Francisco Hernández de Córdoba are now depicted fighting against Romans, not exploring terra incognita. The work ends on a pessimistic note as the social and technological advances, merged customs, and general progress leads to repressive autocratic rule, violence, and social unrest. Perhaps Rome is always destined to fall.

The Hero is the work of David Rubín, who not only writes the story, but also is the primary artist of this imaginative and moving version of the life of Heracles. At the opening of each chapter, Rubín features an ancient representation of Heracles and juxtaposes it with his own version of the monster or deed to be covered. While he follows aspects of the traditional telling of Heracles’ labors, he stresses the ambivalence Heracles feels about certain tasks (saying to himself after killing the Ceryneian hind, “You’re a prick, Heracles.”), the commercialism of modern “heroism” (a talk show featuring Chiron asks whether his star pupil is a sell-out), his complicated sense of destiny in the face of Hera’s antagonism or even biological determinism, and the overall tragic arc of his story.

Heracles’ sense of what being a hero represents grows more and more tarnished, especially after his maddened murder of his family, which features a tour-de-force artistic representation of the Fury and the resulting trauma that he cannot shake. Only the intervention of Iolae (in this telling, a younger male love interest), a sort of Robin to Heracles’s Batman, causes him to reenter the world and helps him to dispel the guilt and shame of his past actions. The story arc stresses the selflessness of Heracles, his distance from the gods, the essential differences between god and mortal (coming down firmly in favor of mortal dreams, fragility, and optimism), and the unyielding hatred of Hera.

The tasks assume new symbolic weight, often linked to ancient ideals, but updated to a modern world view: one scenario depicts Heracles walling-off Nafplio in a prescient parody of Trump’s border wall and “America First” ideology to show the selfishness, heartlessness, and emptiness of such a stance. Metaliterary nods to the role of the story-teller (now, fittingly, a comic book writer), philosophical references to Nietzsches’ idea of the Übermensch, and a healthy dash of Joseph Campbell’s conception of the hero makes this work more than a mere rehashing of Heracles’ deeds in an artistic format.

Indeed, the art itself is also key to understanding the work: imaginative monsters, sci-fi renderings of Hera and Atlas, virulent page spreads showing how violence breeds more violence, fire imagery linking conception with death and catasterism, and countless visual references to films, video games, and other graphic novels stress that this tale is part of a larger narrative and visual continuum. Rubín highlights the intertextual possibilities of this expansive multi-media universe making the concept of the hero a link and foundation of the super-genre that he is actively constructing and offering commentary upon. The self-conscious heroism of Heracles parallels the self-conscious artistic and literary work of Rubín, and this graphic novel is highly recommended for scholars and teachers interested in the reception of the Heracles myth.

Both of these graphic novels exemplify the fact that classical reception is to be found in many different literary and visual genres today. Graphic novels not only allow the ancient world to be illustrated, they can also present us with alternative universes and explorations of both history and myth that ask: what if? While historically accurate graphic novels such as Perpetua's Journey are increasingly being used in Classics courses in order to explore primary texts, there may also be a place for the teaching of counter-factual histories and mythical retellings that capture the imagination of students, teachers, and the general public with compelling stories and vivid color.

05/23/2022
Blog: Contingent Faculty Series: An Interview with Victoria Austen
Our seventh interview in the Contingent Faculty Series is a virtual conversation between Dr. Taylor Coughlan and...
04/13/2022
Blog: Two Years Later: “Classics” after Coronavirus?
In an April 2020 post for Eidolon, I gathered predictions on “classics after coronavirus.” Two years later, it’s...
04/08/2022
Blog: Ancient Worlds, Modern Communities: Increasing Accessibility for the Study of the Ancient World
The Ancient Worlds, Modern Communities initiative (AnWoMoCo), launched by the SCS in 2019 as the Classics...
03/21/2022
Blog: I Love You, I Hate You: A Student’s Perspective on Learning Latin
I have always enjoyed Latin class because it felt like a puzzle, much like math. Find the verb, find the noun that...
03/18/2022
Blog: Power to Punish and Authority to Forgive: Imperial State and Imprisonment in 4th-Century Antioch
Research ideas often develop out of chance encounters or unplanned circumstances. My dissertation project was born...
END_OF_DOCUMENT_TOKEN_TO_BE_REPLACED