Blog: Through the lens of 'Dragon Blade': Rethinking “East” and “West” in a Classics film course 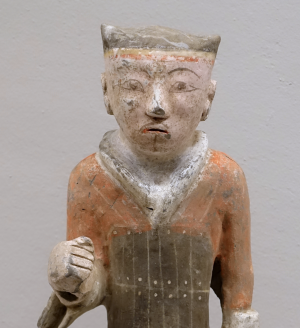 In spring 2018, students enrolled in the upper-level seminar “Antiquity Through a Lens” at Miami University engaged in critical study of the ways the classical world and, more specifically, ancient war narratives have been used in modern film and television to reflect on contemporary society and its conflicts.  Alongside study of ancient primary sources, students thus explored a range of concepts such as gender, class, race, religion, and even the meaning of victory itself in Troy (2004), 300 (2007), 300:  Rise of an Empire (2014), Spartacus (1960), Masada (1981), and Dragon Blade (2015).  It was the latter film, however, that provoked the most intriguing reactions from students in the course, since it forced them to view classical history for the first time through a distinctly non-Western lens. Please note that quotations in italics are taken with permission from comments students wrote when asked to reflect on what their encounter with Dragon Blade contributed to the course, CLS 361.

“One of the main problems when it comes to learning about Western Civilization is there is often a controlled narrative written by those either from the West or in favor of the West . . . By only focusing on the familiar, the West misses out on so many other points of views.”

“Most of our ideas about Rome conjure images of senators in togas, the legion, and the grandeur of Rome; however, looking at it from an angle outside of Rome, as Dragon Blade does, offers an image of an imperialistic empire with influence even in far corners of the world.”

Dragon Blade, written and directed by Hong Kong filmmaker Daniel Lee, was billed as the “first Chinese film to feature Romans as its main topic", and stars Jackie Chan, John Cusack and Adrien Brody, the latter giving an astoundingly (and for the students, delightfully) over-the-top performance.  While the film was a considered a financial success in China, it had only a very limited release in the United States.

The film claims to be “inspired by true events,” but its connection to historical fact is dubious to say the least.  Dragon Blade is set in 48 BCE (mysteriously rounded up to 50 BCE in the US version) during the rule of Emperor Xuan of the Han Dynasty.  Although the film takes Roman relations with Parthia, located in what is roughly Iran today, as part of its backdrop, it sidesteps the disastrous campaign of Marcus Licinius Crassus, whose Roman forces were soundly defeated at Carrhae in 53 BCE.

The film suggests instead (in flashback) that a Roman consul named Marcus Licinius Crassus Dives made an alliance with the Parthians, then was killed by his son Tiberius (Adrien Brody), the movie’s main villain, because Crassus intended to make his younger son, Publius, his successor instead.  As the replacement of a catastrophic defeat with a treaty might suggest, the movie places notable emphasis on the value of cross-cultural interaction, peace over conquest, and cooperation over division—a proposition far removed from other films encountered in the course, especially the massively popular 300 franchise.

“Through the portrayal of Lucius and Huo An, the promotion of respect for other cultures and the connection of east and west through the Silk Road, the audience is able to glean a clearer understanding of how the Chinese wish to situate themselves in the larger narrative of Roman history.”

“In this movie, the Westerners are seen as less refined outsiders who could learn from Chinese culture and morality.”

The plot of Dragon Blade revolves generally around the bromance of Huo An (Jackie Chan), a captain of the Silk Road Protection Squad, and Lucius (John Cusack), a Roman leader who has fled with his renegade Roman legion to the ruined fortress Wild Geese Gate.  Huo An provides refuge for Lucius and his legion and, as harmony between the two sides prevails, Huo An joins Lucius in trying to protect the young Publius from Tiberius, who arrives in hot pursuit and soon gains the upper hand.

Having been forced to end Lucius’ life in an act of mercy, Huo An ultimately unites the different ethnic communities along the Silk Road threatened by Tiberius’ ambition and defeats Tiberius in one-on-one combat  Then Huo An combines his forces with Lucius’ Roman ones and the unified troop is shown in the film’s denouement establishing its own city along the Silk Road, a powerful symbol of unity that seems to reference speculation in recent decades that some of the Roman soldiers taken captive after the battle of Carrhae actually established a settlement in China (this idea is also alluded to in a framing device, cut from the US version, which shows modern archaeologists discovering the remains of the city).

“Where classic Roman films might display pieces of Roman identity, like Spartacus and gladiators or Ben Hur and the Coliseum, Dragon Blade’s ode to Chinese identity lies in how it exhibits the Silk Road with a near-mythical aura.”

“Both the Chinese and the Romans are put in a light that could see both sides benefit from cooperation and harmony, before the ugly underbelly of Roman imperialistic identity emerges in the form of Tiberius and his legion.”

Although Dragon Blade is set in ancient China, the Silk Road is clearly the most significant geographic entity in the film, serving as a powerful symbol of the manifest connectedness between East and West; one character calls it “the great artery of trade and culture that connects the West to the great kingdoms of the East.”  The fact that Adrien Brody’s Tiberius seeks to take control of the Silk Road at the film’s climax only underlines the ways western aggression and the western penchant for violence are held up for criticism at many points in the film.

“Watching Dragon Blade and seeing how the East thinks of themselves was a very beneficial addition to this course and we learned a lot about what the Chinese value just like we learn about what the West values when watching 300.”

“Dragon Blade offers an entirely different narrative of the East.  Jackie Chan helps the Romans, gives them food, shelter, and shows concern for their injured.”

Throughout, Dragon Blade both advocates for the necessity of unity and cooperation between East and West, and also provides a subtle, yet persistent, case for the superiority of eastern values—a not uncomplicated premise, but one that nonetheless provides an essential counterpoint to the bellowing assertions about the West—and demonization of the East—so central to films like 300.

“In Dragon Blade it was especially interesting to see the decentering of Rome in the context of ancient civilizations.”

This is not to say the film was easy to integrate into the class.  Its narrative style—including its frequently dreamlike quality and extensive use of flashbacks—were difficult for the students to grapple with and many of its elements of storytelling seemed downright perplexing to those more accustomed to Hollywood film (the summary given above is intended, in part, to aid first time viewers).  As one American critic explained, “this is the sort of movie where plot developments whip past at lightning speed, to the point where you have no clue who’s supposed to be a good guy or bad guy—but there’s also time for a ten-minute sequence where Jackie Chan, John Cusack and a small blind child all sing to each other” (25 minutes have apparently been cut from the US version perhaps contributing to some of the difficulties). So that even as the students’ understanding of the power of ancient Rome was decentered, their sense of the conventional tropes of such storytelling, too, was productively unsettled as well.

“(Dragon Blade) isn’t trying to endear itself with a western audience.  The Romans don’t sing in English, they sing their national anthem in Latin, a reminder that this is a completely different culture from a current audience.”

“It is essential to the study of Classics for students to distance themselves from the Greeks and Romans in order to analyze them as civilizations in their own right, not mere precursors to American democracy or western civilization.”

Perhaps one of the greatest benefits of the film in the terms of the course, however, was its significant challenge to the ways in which American audiences have come to take for granted both their identification with English-speaking—and generally White—Greeks and Romans in today’s Hollywood film and also their innate assumptions about the superiority of those groups on the broader stage of world history.  By examining the inclusion of ancient Rome in a recent Chinese film, students saw both the value the filmmakers derived from placing these two ancient civilizations in the same landscape, but also some of the ways western history and western values themselves could be assessed quite differently from the “outside.”

“Through watching Dragon Blade, classics students receive a more holistic view of what the world look like at the time of the Roman empire.  They were not alone in the world and were not necessarily the most powerful nation at the time.”

“Dragon Blade presents Romans as they were at the height of the Roman Empire, expansionist, loyal, and technologically advanced, and then imagines what they would have been able to teach a civilization of similar power and expansion.”

The actual history of Roman contact with China is a fascinating, albeit often overlooked topic, yet one that seems increasingly relevant to the world today.  Contrary to the film’s storyline, the first recorded contact between the Romans and Chinese was in 166 CE, during the reign of Marcus Aurelius.  Later, in the 3rd century CE, an account of the Roman empire—which the Chinese called Da Chi’en—was written by the Chinese author Yu Huan, a primary source that can help provide further context for the film’s vision.

Ultimately, regardless of the varied lessons they took from the film, Dragon Blade gave Miami classics students an opportunity to think about a historical point of contact they had never learned about before, making the world of ancient Rome at one and the same time a lot more complicated and a lot less familiar.

Denise Eileen McCoskey is a Professor of Classics and affiliate of Black World Studies at Miami University (Ohio). In 2009, she won the APA Award for Excellence in Teaching at the College Level. She is the author of Race: Antiquity & Its Legacy, and is currently at work on a project examining the role of eugenics in early twentieth-century American classical scholarship.

05/23/2022
Blog: Contingent Faculty Series: An Interview with Victoria Austen
Our seventh interview in the Contingent Faculty Series is a virtual conversation between Dr. Taylor Coughlan and...
04/13/2022
Blog: Two Years Later: “Classics” after Coronavirus?
In an April 2020 post for Eidolon, I gathered predictions on “classics after coronavirus.” Two years later, it’s...
04/08/2022
Blog: Ancient Worlds, Modern Communities: Increasing Accessibility for the Study of the Ancient World
The Ancient Worlds, Modern Communities initiative (AnWoMoCo), launched by the SCS in 2019 as the Classics...
03/21/2022
Blog: I Love You, I Hate You: A Student’s Perspective on Learning Latin
I have always enjoyed Latin class because it felt like a puzzle, much like math. Find the verb, find the noun that...
03/18/2022
Blog: Power to Punish and Authority to Forgive: Imperial State and Imprisonment in 4th-Century Antioch
Research ideas often develop out of chance encounters or unplanned circumstances. My dissertation project was born...
END_OF_DOCUMENT_TOKEN_TO_BE_REPLACED