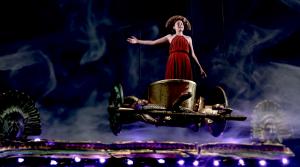 In our third ‘Letters from CAMP’ blogpost, Prof. Emily Jusino discusses the trials and tribulations of picking a translation of an ancient drama for live performance.

“People expect Greek tragedy to sound a little stilted and awkward.” This is a paraphrase of a comment made to me recently by a director planning on staging the Medea. It was his defense of the translation he had chosen when I said that I disliked his choice. What made this translation appeal to him was precisely what made it seem terrible to me: the stiltedness and awkward English that comes across both as “translation-ese” and as a refusal to update any references in the text for a modern audience. But, of course, he could get the rights to use this translation for free.

When staging an ancient play, one of the first decisions a director must make after deciding which play to perform is deciding which translation to use. Do we prioritize cost or currentness? All too frequently for ancient plays directors choose to use the free translation, often, but not necessarily, in the public domain. In part, this is because most examples of pre-modern drama in English theater are widely available for free, no rights to be paid or scripts to be bought. The underlying assumption then becomes that this should be true of all pre-modern theater, and directors give less consideration to the quality of the translation. After all, why should a theater group use part of their probably limited to budget to pay for a better translation when there are ones available for free?

In the case of the aforementioned director, the translation he chose is not public domain, but is freely available online. A comparison between the free translation and more recently published translations shows definite differences in clarity and quality. Here are the opening lines of Medea

from the free translation (Johnston):
Oh how I wish that ship the Argo / had never sailed off to the land of Colchis, / past the Symplegades, those dark dancing rocks / which smash boats sailing through the Hellespont.

from Arnson Svarlien (Hackett, 2008):
I wish the Argo never had set sail, / had never flown to Colchis through the dark / Clashing Rocks.

from Rudall’s translation (Ivan R. Dee, 2000), which was done with performance specifically in mind:
I wish they had never set sail! I wish the Argo had never passed through the straits where the gray rocks loom—and then made its way to Colchis.

Arnson Svarlien's has a more poetic take; Rudall’s is prioritzing immediacy of language and emotion. In comparison with either of these, Johnston’s is wordy and awkward.

From my experiences as an actor and audience member, the choice to prioritize cost over quality yields at best an uneven experience. I have sat in the audience watching productions where it seemed half the actors did not understand what they were saying, and even fewer members of the audience could follow. In one instance, a university theater program could afford a professional director and high production values, but relied on a 60 year old translation, while quoting the author of a much more recent translation in their program. Why not use the more recent translation?

I have been in casts where the other actors do not understand the mythological references in the script, and the director cannot explain them either. For most people, names like Symplegades or Myrtilus or Niobe have little to no meaning, and do nothing to elucidate the themes of the play for a modern audience as they would for an ancient audience. Translations used in performance that perpetuate archaic language and obscure references do little to encourage people to perform, or seek out performances of, ancient drama. Instead, they leave everyone confused and uncertain as to why ancient drama should be performed other than as an academic exercise.

If my experiences in performing ancient drama have taught me anything, it is the importance of choosing a translation designed specifically for performance for a modern audience. It should sound good coming out of an actor’s mouth and work to alleviate the references and allusions lost on a modern audience. Most of us know that ancient drama is rich and meaningful and written in the meter closest to everyday speech. It would be more valuable to a show to spend a little less on other aspects of the production in order to secure a better script. Deciding to prioritize the quality of translation over the cost could go a long way towards dispelling the idea that these plays are stilted and awkward because nothing is farther from the truth.

Emily Jusino is an Assistant Professor of Classics at the University of Rochester. Her research interests include Greek tragedy and the reception of ancient drama in contemporary performance. She has also acted in numerous productions of ancient plays. She can be reached at e.jusino@rochester.edu.