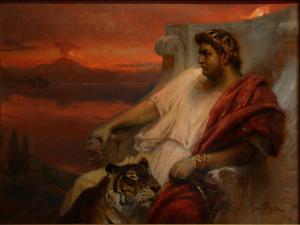 If this problem applies to a joke composed a decade ago, the problem of recognizing humor from antiquity is even larger. We are lucky to possess a corpus of ancient works, labelled “comedies” or “satires,” which give us a pretty good idea about what ancient Greeks and Romans found funny. I argue, however, that these do not present the entire picture. Although there is certainly humor in works that were composed and performed for the purpose of being funny, it is unlikely that these were the sole locus of humor in the ancient world. In fact, we know from the writings of Cicero and Quintilian that humor was used in political rhetoric. I consider it a small leap to assume that silliness and seriousness were not entirely separate categories in ancient Rome any more than they are now. Political oratory can be especially rich in humor, as both Cicero’s speeches and his instructional work on oratory, De Oratore, confirm. Quintilian says that Cicero made many jokes, and modern scholarship has followed this observation.

In my dissertation, however, I was interested in a less overtly humorous author, the famously severe Tacitus.

Tacitus’ distinctive style has suggested to some that he might have employed humor on purpose. Several characteristics of his style tend to create humor, especially the rhetorical techniques that disorient his readers and his tendency to add significant information at the end of sentences. Notably, Paul Plass argued in Wit and the Writing of History (1988) that Tacitus, along with several other Latin historians, used humor in his discussion of Roman political history. His main contention is that these Roman historians use humor to discuss “political irrationality,” his term for when political power supersedes reality. Plass focuses on identifying small segments of Tacitus that might be individual jokes. For me, Plass’s argument raised further questions, including how individual humorous passages might be connected to each other and whether there might be more to be said about the purpose of humor in specific loci.

To create a schema for locating humor in Tacitus, I drew upon a combination of ancient sources (mainly Cicero and Quintilian) and modern theories of humor. Among the latter, the most important for my project is the set of linguistic theories put forward by Victor Raskin and Salvatore Attardo. These theories were originally called the Semantic Script Theory of Humor (Semantic Mechanisms of Humor, 1985), later further developed as the General Verbal Theory of Humor (Linguistic Theories of Humor, 1994). For brevity, I call this set of ideas “script theory,” because its main contention is that all humor is generated by the collision of two opposed “scripts.”

A script is a linguistic concept that describes the relationship between words and their meanings. Every word is associated with at least one “script,” which includes the meaning of the word and a broad set of associated concepts. For example, the word “Latin” can evoke the notion of a dead language, the city of Rome, and a lot of noun and verb forms. Scripts are also, however, determined by context. If you encounter the words “Latin dance” rather than “Latin language,” the scripts that you employ to explain this utterance are more likely to feature salsa and bachata than participles and paradigms.

Scripts also depend on the knowledge of each reader, because different people’s knowledge bases include different sets of specialized information on each concept. In simple terms, script theory posits that people use context to identify the most relevant meaning of a word, and that once they have identified it, they can extrapolate which concepts are likely associated with it.

According to script theory, humor occurs when two incompatible scripts are made to overlap. Incompatible scripts are called “opposed” and can overlap either when two meanings of the same word are evoked at once (think of a pun or a double entendre) or when they occur in the same close context (think of irony or a funny anecdote). Script theory considers these two principles, script opposition and script overlap, to be necessary and sufficient conditions for all humor — always — and justifies that claim by arguing that cultural variations on scripts change the requirements for overlap and opposition, so that changes in cultural expectations are built into the theory.

While it would be impossible to develop a theory of humor that entirely transcends time and culture, script theory provides a useful framework for studying humor in Tacitus, whose weighted alternatives, strong oppositions, and participation in the pattern-heavy tradition of Roman historiography make his works especially ripe for analysis based on linguistic scripts.

If we follow script theory, Tacitus’ use of humor is not confined to witty epigrams but appears more frequently and subtly. The oppositions that he creates within his narrative foster humor and are in turn strengthened into clearer themes by his use of humor. One of the most extended examples of this technique occurs in Tacitus’ characterization of Nero, who straddles the opposed roles of lofty emperor and lowly theatrical performer. With Nero, every demonstration of power becomes a theatrical performance as well. The most notable incident is his murder of his mother Agrippina. By the time Tacitus’ Nero is secure enough to murder his mother, he has been consolidating power for some time. The murder is both a theatrical spectacle and a demonstration of what imperial power looks like in Nero’s hands.

In this episode, imperial power looks like a show gone wrong. Tacitus produces a humorous contrast between imperial power and semi-competent theatrical performance even as he describes a successful matricide. Nero’s plan to have Agrippina killed depends on an elaborate lie in which he pretends to want to reconcile their disagreements. Their fake reconciliation depends on his emotional performance and is, ironically, the only part of the plan that goes well. (Tacitus comments on Nero’s teary and apparently convincing performance at 14.4.1.) Although pretending to reconcile, he has planned to have her drowned by a boat rigged to fall apart in the middle of the Bay of Naples (14.3.3). Even leaving aside its absurd implausibility, the plan is presented as humorous in that it creates a collision between the lethal apparatus of state power and flashy theatrical special effects. Nero has the power to order the death of his own mother, but not the personal restraint to carry it out in a practical manner. The imperial requirement that the most vicious crimes be kept secret has here come into conflict with the theatrical demand that the best spectacles should be public.

Nero’s underlings, including some more closely associated with Agrippina, also understand that they are required to be both actors and courtiers. Not all of them, however, know the script of Nero’s play. Tacitus describes one of Agrippina’s freedpeople, Acerronia, trying to be rescued from the water by claiming that she was Agrippina. Nero’s goons batter her to death with oars because they do understand the real purpose of the charade, while Agrippina, apparently having guessed the purpose, swims away in silence (14.5.3–5).

Although there is more than a hint of horror to the matricide, Tacitus also treats the entire episode with humor by playing up the discrepancies between expectation and reality, imperial power and theatricality. Nero’s tactics are implausible and unnecessarily dramatic throughout; the success of his initial plans depends on his ability to act and to communicate his directions to others, more in the manner of an impresario than an emperor. Nevertheless, his ridiculous and theatrical behavior is also entirely characteristic of his principate: nobody but an emperor could organize a production of such large and deadly import, and by the end of the charade, Nero is the unchallenged ruler of Rome.

Tacitus does not allow the emperor to be seen without the actor, nor the actor without the emperor. Doing so creates humor because it unites these two opposed scripts, and some parts of this morbid episode are indeed hilarious. Tacitus’ evocation of the humorous contrast between imperial leadership and theatrical performance, however, reinforces a serious point about how Nero ruled. The difference between Nero’s behavior and the correct behavior for an emperor is not only humorous but also highly dangerous.

This example demonstrates the connection between Tacitus’ use of humor and his discussion of imperial politics. Imperial power incorporates the inconsistencies of those who wield it, and humor exposes those inconsistencies in both critical and descriptive ways. By using humor in these circumstances, Tacitus is able to communicate these complex ideas concisely and to mold them into consistent patterns that become recognizable to readers.

The fact that Tacitus uses humor at all may be a surprise, given his justified reputation as a Very Serious Author. The way he uses humor to interrogate political power, however, strikes me as familiar. Humor was used before and has continued to be used since to illustrate the hypocrisy of people in power. Although the targets of political humor change constantly, humor has consistently been used as a tool to talk about power by those who are not allowed to speak directly and those who wish to communicate the absurdity of injustice.

07/01/2022
Blog: Ancient Worlds, Modern Communities: Contemporary Responses to Greek Myth and Tragedy through Drama, Film, and Visual Art
The Ancient Worlds, Modern Communities initiative (AnWoMoCo), launched by the SCS in 2019 as the Classics...
06/29/2022
Blog: “Deeply rooted in history”: Teaching abortion ancient and modern in a post-Roe v. Wade world
With weary hearts, we consider with you what Classics can do in the face of Dobbs v. Jackson Women’s Health...
06/27/2022
Blog: Teaching in a Time of Anti-Asian Violence: Reflections on Asian & Asian American Experiences in Classical Studies, Part 1
This two-part series reflects upon AAPI experiences in Classical Studies. Part 1 is catalyzed by the author’s...
06/25/2022
Blog: Roe v. Wade, the GOP, and echoes of Augustus: Reproducing fascism
I guess I should say “thank you.” Gratias vobis ago. Thank you to the Republican Party’s long game, a partisan...
06/20/2022
Blog: Paternalism and the “Good Slave” in the Speech for Phormion and the Legacies of Slavery
In a discussion of the concept of the “good slave” in her book Reconstructing the Slave: The Image of the Slave in...
END_OF_DOCUMENT_TOKEN_TO_BE_REPLACED