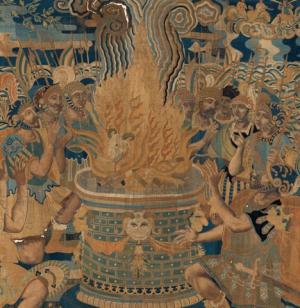 There are many definitions for the Digital Humanities—some wonder whether it is, in fact, a distinct field at all. My mind tends to operate at a pragmatic level and I have a very simple way of thinking about the question: in the Digital Humanities we think about what contributions we as humanists can make to a world where an increasing, if not a predominant, amount of human thought circulates through digital media: texts, sounds and images on our smartphones, video-conferencing and texting instead of simple voice communication, digital libraries of texts that support new forms of reading, new forms of representing human ideas and experience—everything is changing and nothing will be the same. And yet the big questions remain the same. The big question is not what we think about the Digital Humanities but what we think about the Humanities in a digital age. Why do we study the Humanities at all? I actually think it would be more appropriate to speak of the “Print Humanities” to distinguish the practices of print culture from the Humanities as they are evolving today.

When I think about why I study the Humanities and why I am proud to call myself a humanist, I can point to the opening minutes in any performance of what is probably the first surviving composition of European literature, the Homeric Iliad, an epic about war, a poem that is both primitive and sophisticated, brutal and humane, a poem in which human beings treat one another with the most extreme violence at their disposal, but where they can at the same time disarm the audience with those feelings of compassion and empathy. The poem introduces to us a figure who will play a small but pivotal role (1.69–70):

As a Humanist, I exist in the present—as we all must. I think about the past—as we all should—and, by so doing, I think about what sort of future I think is best, as we all do, in some form or another. I think about the past because that is the only way to develop models for the future and the mechanisms by which to pursue those models. The greatness of a nation or a culture or of any other human community lies in how it understands the past in the present in deciding about the future. The greatness of a nation or a culture lies in the clarity and power of that intellectual process. The creation of a celebratory myth about the past—or even a historical memory that is accurate insofar as it goes but selective—makes true greatness impossible. Greatness emerges from our ability to fasten upon those elements in the past that we wish to emulate and ideally surpass, while letting the mistakes of the past—especially the mistakes of those who fashioned the nation, culture, etc., with which we identify—sink deeply into our minds and into our hearts. We must feel as well as think.

In 1982 I began to immerse myself in what we now call the Digital Humanities. I did so because I participated in a scholarly tradition that extended far back in time. Modern professionalized scholarship on Greco-Roman culture extended at least back through the nineteenth century, but our scholarly traditions extended back thousands of years to Alexandria and Athens. Digital technology was far more primitive then than now—my department, for example, spent $34,000 on a hard disk that was as large as a washing machine, arrived in a wooden crate, required a $2,000 special purpose circuit board, cost $4,000 a year for maintenance and stored 600 megabytes of data. But the future was quite clear, and that future was going to involve a shift from print to digital. No one knew how long this transformation would take but it was clearly going to happen. If I saw my field extend back generations, centuries and millennia into the past, I felt that I had to think about generations, centuries and millennia in the future. What difference did it make if that transformation would take 5 years or 50 years? I was in my early twenties and the world was going to change substantially within my actuarial life-span. And the change was going to be fundamental and transformative.

A generation later we are still in the incunabular stage of the digital transformation. Incunabula were the first printed books and they were designed to look like handwritten manuscripts. It took a generation before the form of printed books exploited the fixity and predictability of print reproduction, adding features such as page numbers, running headers, etc. When Thomas Edison produced the first movies, he pointed a static camera—decades would pass before artists such as D. W. Griffith would exploit the possibilities of film, integrating close-ups and different perspectives. The same thing holds true for the use of digital methods in the Humanities: our editions automated the services implicit in print culture. Most of our publications—and almost all of the publications that we use to earn tenure and demonstrate our academic gravitas—can be produced in forms such as PDF or simple HTML. We still ask, as we have asked for decades, how scholars can get academic credit for digital publications.

I think that various convergent technologies have matured and we are now on the cusp of disruptive change. I believe that the time will come when we no longer ask how we get tenure for digital work but how to justify traditional publications. We need hybrid publications that integrate traditional argumentation with the data and the analytical methods upon which our conclusions are based, as well as with services that make the data and methods intellectually accessible to as many people with as many backgrounds as possible.

[Header Image: Detail from “The Prophecy of Calchas from a set of The Story of Troy.” Silk and gilt paper thread on cloth. Chinese, from Macao, late 16th century. New York, Metropolitan Musseum of Art 50.97.2. Public Domain. Licensed under CC0 1.0 Universal (CC0 1.0).]

07/23/2021
Blog: “Can We Strangle the Muse?”: Carson and Bruno’s The Trojan Women
By Christopher Trinacty, Emma Glen, and Emily Hudson (Oberlin College) Anne Carson’s celebrated adaptations and...
07/12/2021
Blog: Contingent Faculty Series: A Conversation with Daniel Libatique
Our fifth interview in the Contingent Faculty Series is a virtual conversation between Dr. Taylor Coughlan and Dr...
07/06/2021
Blog: Six months in(surrection)
Today marks half a year since insurrectionists stormed the U.S. Capitol, occupied the Senate chamber, violently...
06/28/2021
Dissertation Spotlight: The “Oracular Tale” and the Oracles of the Greeks
Joseph Fontenrose’s The Delphic Oracle (1978) fundamentally reshaped how we think about Greek oracular divination...
06/24/2021
Blog: Ancient Worlds, Modern Communities: Connecting to the Ancient Greeks through Medicine, Sociology, Literature and Philosophy
The Ancient Worlds, Modern Communities initiative (AnWoMoCo), launched by the SCS in 2019 as the Classics...
END_OF_DOCUMENT_TOKEN_TO_BE_REPLACED