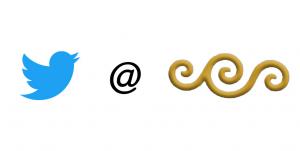 In June 2016, Twitter user @paregorios laid down the gauntlet to SCS attendees:

@Paregorios, a.k.a Tom Elliot of @isawnyu and the @PleiadesProject, was referring to the vibrant live Twitter discussions which emerged in parallel with the summer’s Big Ancient Mediterranean (#BAM2016) conference at the University of Iowa.

Live-tweeting happens when individuals use Twitter to create a running commentary of a live event. While a speaker presents their paper to the audience physically before them, live-tweeters write succinct snapshots of their talk, relaying elements of its content in textual form to the broader audience of the internet. Live-tweeting is happening increasingly at academic conferences, and has already been taking place at the annual meeting of the SCS for a number of years. As part of the Society’s organizing principle (“to advance knowledge, understanding, and appreciation of the ancient Greek and Roman world and its enduring value”) recent annual meetings have encouraged the engagement of conference attendees with the wider online community by promoting the official hashtag, #aiascs. Hashtags provide impromptu, user-generated connections between social media messages on a shared topic and, when consistently used on a social media platform like Twitter, they serve to organize tweets from a wide range of users into a coherent stream of real-time information.

When scholarly presentations are live-tweeted, the reach of an individual’s work is amplified. At the SCS, where several panels take place simultaneously, the presence of tweeters in concurrent panels allows a record of simultaneous events. If there are multiple tweeters in the same panel, they can give different perspectives on the same information. Tweeting also has the benefit of drawing out and communicating the arc of a scholarly panel—making note of recurring themes and developments which interconnect individual papers. Live-tweeting conference activity also expands the audience of the convention to absent colleagues within the academy and reaches out to an audience of non-academics interested in the cutting-edge research on display.

Not only does live-tweeting draw attention to the work of individual scholars, but it brings the conference as a whole into the public eye, demonstrating the nature of its community. As a tool for disseminating thought, Twitter uniquely encourages audience participation: retweeting allows for comments and discussions, albeit brief ones. Twitter provides a record of the conversations that arose from the panels you attended and papers that you might not have seen in person, but which you participated in remotely through interaction with the tweeters in that panel.

Here are some guidelines on how to tweet the annual meeting of the SCS:

-       Use the hashtag. The official hashtag for the annual meeting is #aiascs. The hashtag will allow your audience to see your tweets alongside the other tweets from the conference. At the SCS, each panel has a session number which can also be used. This is helpful for grouping individual papers together.

-       Attribute the material to its author. Always include at least the last name of the speaker. Citing the speaker is an essential part of live-tweeting conferences, in order to associate ideas closely with their author.

-       Be faithful. Make sure that your tweet is a fair reflection of the speaker’s argument.

-       Be pithy. Focus on the most significant and striking aspects of a paper, the elements which are likely to be of greatest interest.

-       Use your handle. If you are a speaker at the SCS, and you have a Twitter handle associated with your academic persona, list it on your handout or slides. Your audience can then attribute the content of your paper to you directly.

Live-tweeting is also just a part of the wider experience of academic Twitter. Academics have been using Twitter as part of their toolkit since its beginning in 2006, with a PhD student among its first 100 users. It also isn’t a coincidence that academic Twitter has been such a productive environment for scholars who are people of color, women, and the LGBTQ+ community. Live-tweeting and tweeting generally allow us to be more inclusive with our scholarship. Twitter is a venue where you can discuss aspects of your research, your teaching, and your life as an academic with a public audience composed of diverse individuals, from fellow scholars in related fields, to potential students, to those who are just genuinely interested in interesting things. Twitter is a venue where we can perform our knowledge publicly, and where we can learn more ourselves.

Hamish Cameron is a Lecturer in Classical and Medieval Studies at Bates College. His research examines ancient borderlands, Classical geography and the Roman Near East with particular interests in imperialism and mobility. His teaching incorporates the applied methodologies of digital humanities, especially digital geography and the digital dissemination of academic information through social media and public-facing platforms, as well as addressing those topics as objects of study. He occasionally tweets on historical subjects at @peregrinekiwi and curates class tweets at @edgesofhistory. hcameron@bates.edu. Hannah Culik-Baird has a BA in Lit. Hum. from Oxford University and is currently a PhD candidate finishing up her dissertation - “Cicero and the Early Latin Poets” - at the University of Southern California. Her research interests include Cicero, Roman intellectual life, early Latin poetry, literary fragments, and book culture. She is interested in the power of the internet and social media to broaden educational and humanistic experiences. Hannah tweets at @opietasanimi. culik@usc.edu.

01/15/2021
Blog: Classical Architecture and the Attack on the Capitol
On December 21, 2020, which now seems like eons ago, Donald Trump issued the “Executive Order on Promoting...
01/12/2021
Blog: A committee, a coup, a Cruz, and a Catiline
Against the backdrop of the United States’ first non-peaceful transition of power, there is a much smaller-scale...
12/21/2020
Blog: Stultitiis et rebus infestis: Petition for UVM to Surrender its Motto
In memoriam Stellae Q. Decimae Lucerna ardens extinguitur   In March 2019 the Classics Department of...
12/18/2020
Blog: Contingent Faculty Series: An Interview with Joshua Nudell
Our third interview in the Contingent Faculty Series is a digital sit-down between Salvador Bartera...
12/04/2020
Blog: Come and Take It: The End of Eidolon
Late in the afternoon on November 5, 2020 — close to 24 hours after polls across the country had closed for the...
END_OF_DOCUMENT_TOKEN_TO_BE_REPLACED