Blog: Continuity and Change: A Perspective from the SCS Office 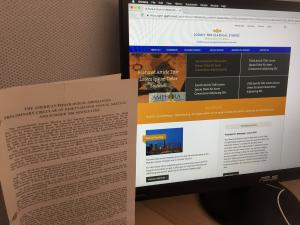 As the sesquicentennial of the Society approaches in 2019, the SCS Board of Directors is looking both back and forward as the Society makes plans to celebrate the past achievements of our organization and chart a course for the next 150 years. However, since I took over from Adam Blistein this summer and new staff have come on board, a slew of urgent tasks has afforded little time for reflection until quite recently. Now that SCS staff are comfortably settled at 20 Cooper Sq. on the campus of New York University, and we have accustomed ourselves to the rhythm of daily business, Erik Shell, Jim Harvey, and I have begun to reflect on the past and the future of the organization. We have discovered gems, some humorous and some serious, in the run of APA Newsletters that we inherited from the Penn Office. You may have seen some of those posted recently on Twitter (@scsclassics). We have been dipping into the early history of the APA written in 1963 by Roger Lucius Shero (“The APA: An Historical Sketch,” TAPA 94:X-L). A carbon-copy typescript of that essay sits on my desk.

We are striving to make some changes, including the launch of the reinvigorated blog and redesign of our front web page, while maintaining continuity by providing the services, such as the Placement Service, that our members expect. As we negotiate the complex dynamics of continuity and change, one questions springs to mind. Whom does the SCS serve? This question is not new. In the last page of his history of the APA, Shero mentions the “sporadic attempts on the part of the Association to reach out beyond the professional circle of classicists” that had, during the association’s first century, been celebrated by some members while opposed by others.

The “professional circle of classicists” is now far more diverse that it was in the 60s in terms of gender. Further, the work of classicists now encompasses areas such as reception and performance studies and digital classics that were unheard of 50 years ago. As the organization’s name change signals, the field of classics has expanded although philology still remains central to much of our work. Classicists also inhabit in the 21st century a variety of different roles. They include faculty and students at research universities, liberal arts colleges, and comprehensive institutions. Our members are tenure-track and contingent, full-time and part-time. Our members are school teachers, independent scholars, and librarians. To reach and serve all these constituencies within the “professional circle of classicists” is in itself challenging. That circle not a homogeneous group. How to reach and engage those outside that group is a further challenge, especially when we consider that there are many who have been historically excluded from the study and appreciation of classics. We should feel an ethical imperative to provide opportunities to all for engagement in and study of the classical world.

It is clear from the Society’s current strategic plan that the organization is aiming both to reach in to the “professional circle of classicists” in order to serve them more effectively, and to reach out to broader publics. However, that agenda is ambitious. It will require the attention and passion of staff, officers, directors, committees, and members of the Society. It will also require collaboration with other organizations such as our regional societies, the American Classical League, not-for-profit organizations such as the Paideia Institute, and sister organizations abroad. We cannot act alone.

As we seek a more expansive role, we will not be giving up support for core scholarly resources such as TAPA and L’Année philologique. When we consider new directions, we have to prioritize. The new Strategic Development Committee will work with the Board and Divisions in order to prioritize new initiatives and identify funding sources for them. At the SCS office, we will implement those initiatives, support our existing and new committees such as the Committee on Diversity in the Profession and the Committee on Classics in the Communities, and continue to improve the online presence of Society so that we provide helpful resources to a variety of constituencies. We also hope to contribute ideas that will move the society forward.

Helen Cullyer received her PhD in Classics at Yale University. From 2000-2002 she was the only full-time classicist at Evergreen State College. She went on to teach classics at the University of Pittsburgh, with a joint appointment in philosophy. From 2008-2016 she was a Program Officer in Scholarly Communications at The Andrew W. Mellon Foundation, funding non-profit publishers, academic libraries, preservation and conservation projects, and digital resources. In summer 2016 she succeeded Adam Blistein as SCS Executive Director.

07/23/2021
Blog: “Can We Strangle the Muse?”: Carson and Bruno’s The Trojan Women
By Christopher Trinacty, Emma Glen, and Emily Hudson (Oberlin College) Anne Carson’s celebrated adaptations and...
07/12/2021
Blog: Contingent Faculty Series: A Conversation with Daniel Libatique
Our fifth interview in the Contingent Faculty Series is a virtual conversation between Dr. Taylor Coughlan and Dr...
07/06/2021
Blog: Six months in(surrection)
Today marks half a year since insurrectionists stormed the U.S. Capitol, occupied the Senate chamber, violently...
06/28/2021
Dissertation Spotlight: The “Oracular Tale” and the Oracles of the Greeks
Joseph Fontenrose’s The Delphic Oracle (1978) fundamentally reshaped how we think about Greek oracular divination...
06/24/2021
Blog: Ancient Worlds, Modern Communities: Connecting to the Ancient Greeks through Medicine, Sociology, Literature and Philosophy
The Ancient Worlds, Modern Communities initiative (AnWoMoCo), launched by the SCS in 2019 as the Classics...
END_OF_DOCUMENT_TOKEN_TO_BE_REPLACED