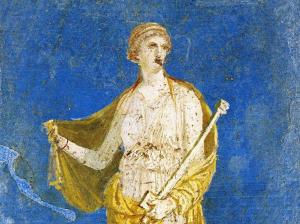 If these women sound alike, it’s not just intertextuality. The counterfactual is the modality of heroines. While classical heroes forge ahead along the paths of their destiny, heroines must make wishes rather than odysseys –– unattainable, impossible, counterfactual wishes. These wishes serve to unravel the myth, unwinding it all the way back to the point where the intrusion of a stranger set each heroine on her tragic path. “If the ship had never sailed, then…” she would be free, would be safe, would be her own protagonist in her own epic story.

Grammatically, an unattainable wish resembles the protasis of a counterfactual conditional. The protasis sets up the conditions under which the main clause, the apodosis, can come true. In an unattainable wish for the present or the past, the implied apodosis could not occur because the conditions were not met. The apodosis thus describes an alternate reality, a possible world parallel to the one we live in. 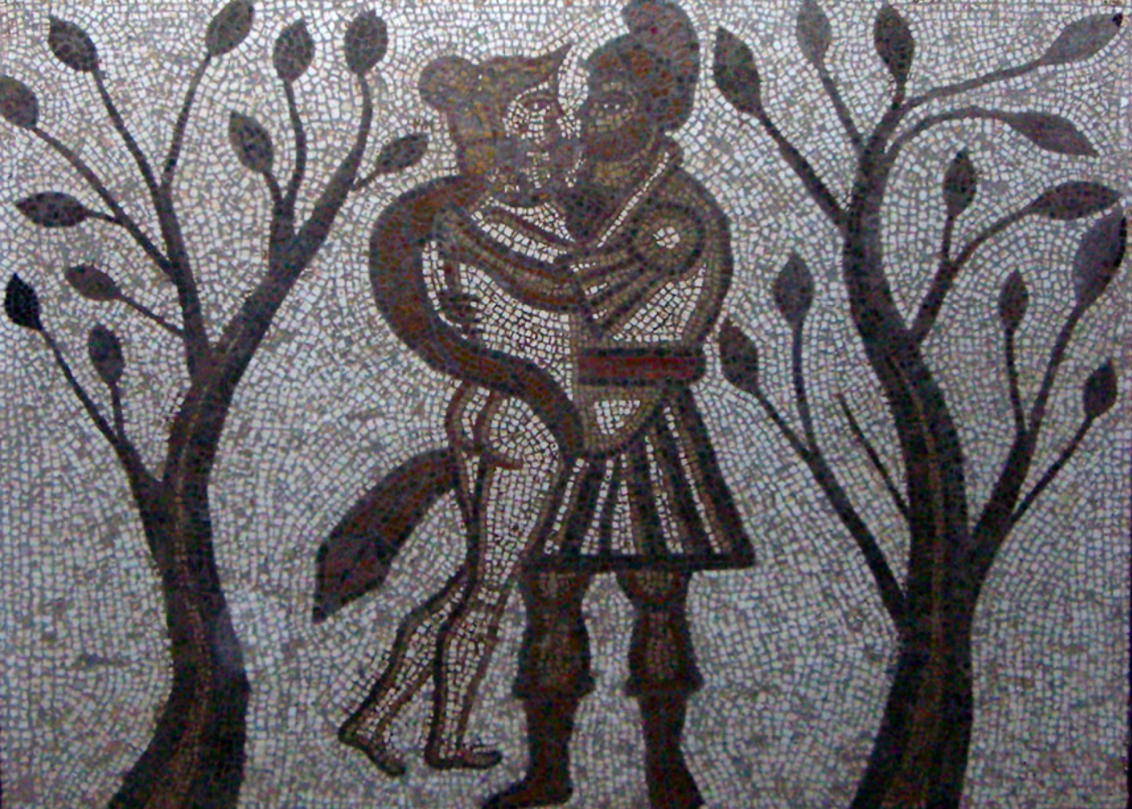 According to the philosopher David Lewis, possible worlds are as real as our own; we only think of our world as actual because we happen to live in it. However, the implied apodosis of a counterfactual wish gives us a glimpse of a possible world that is as real—though unreachable—as our own. Despite the fact that I can’t inhabit the world where Americans stayed inside and we successfully flattened the curve, I like to think that in some version of our world, people cared enough about each other to stop the spread of the virus before it could take so many lives. As of this morning, the count was 189,000 deaths in the United States.

If pandemic is the word of 2020, then the unattainable wish must be the year's signature grammatical construction. The lives we should be living brush up against our shoulders like ghosts. “I wish we could be together,” I told my students over email or Zoom every week of spring term: “I wish you could celebrate your graduation with your friends.” “I wish I could tell you what’s going to happen in the fall.” The words of Cicero capture our feelings about the pandemic succinctly: Nōllem accidisset tempus: “I wish the time never had come” (Fam. 3.10.2).

Mythology is a helpful conduit for thinking about alternate worlds. The mythological megatext, a term coined by Charles Segal in 1983, contains all the possibilities of a mythological narrative: Iphigenia sacrificed, Iphigenia saved; Heracles in the underworld, Heracles apotheosized. No version is privileged – contradictory accounts coexist, however uncomfortably. During the virtual term, it was the openness of the world of myth that helped me be able to imagine even the possibility of a world outside of the pandemic. 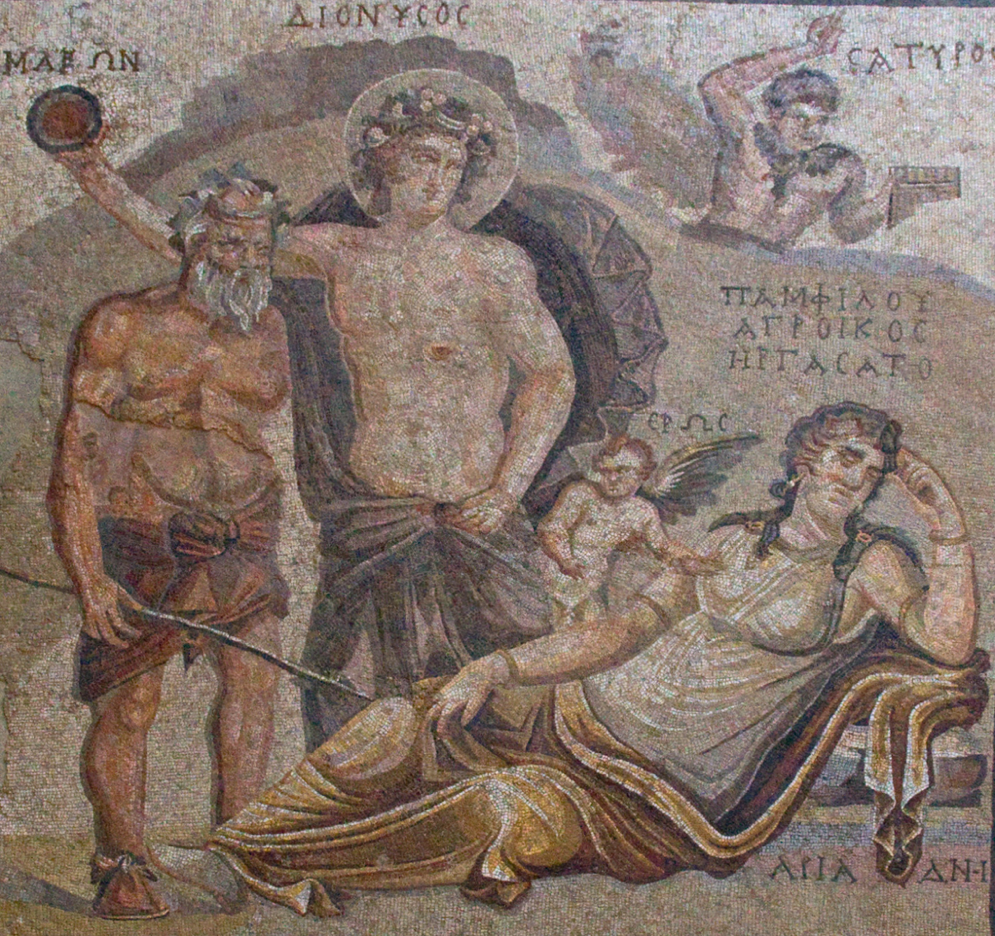 The lockdown was announced the day before winter term finals. The students had to take their tests and write their papers in an aching panic. During the timeless stretch of spring break, we at first heard nothing, then we heard about layoffs – rumors, until the rumors were confirmed. We were told that virtual term was temporary, that we would be back in a couple of weeks – wishful thinking. None of us knew anything: there was this dreamlike feeling that the whole world had taken a wrong term somewhere, that this couldn’t possibly be happening.

My college is on trimesters, which meant that we would be starting new classes during the virtual term. For spring term, I was getting ready to teach Ovid’s Metamorphoses (in English) in a half-credit course called “Myths, Monsters, and Mortals.” Normally, in my in-translation courses I work hard to facilitate student-initiated discussion, to avoid the question-and-answer style of discussion where the students talk to the instructor alone. But open and honest group discussion requires trust and rapport, which would be painfully difficult to build from our tiny boxes on the computer screen.

The live meetings were optional, but nearly all of the students regularly attended the weekly Zoom meetings. At first, I was nervous about the class meetings, afraid of the awkwardness, the moments of silence, of having to force discussion instead of letting it flow. I kept wishing that we could be together in the same physical space. But as we met, week to week, checking in with each other and acknowledging our shared frustrations and fears, we grew more comfortable with each other. 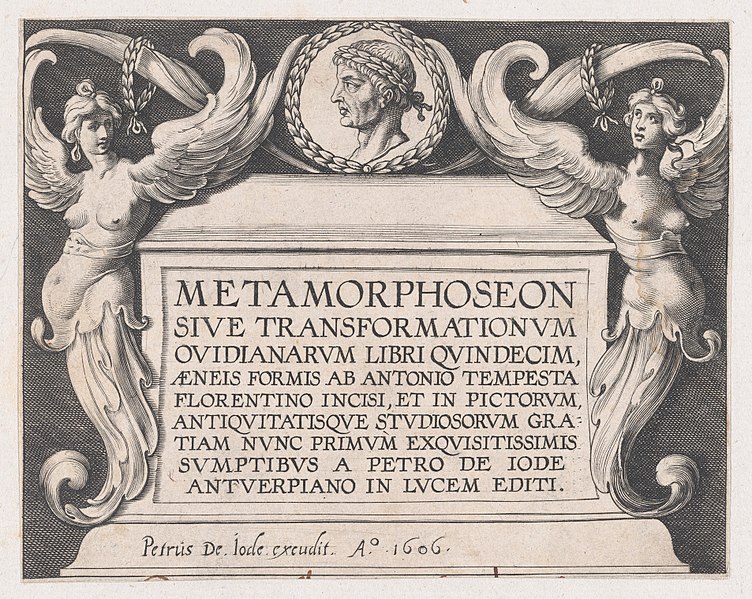 Figure 3: Titlepage to Ovid's Metamorphoses, an etching from Antonio Tempesta (1606) now at the Metropolitan Museum of Art (CCO).

The students were diverse in age, race, nationality, and familiarity with classical mythology: some had grown up with D’Aulaires, some had read the Percy Jackson books, some had had almost no exposure to classical myth. My aim was to give each student ownership over the material, regardless of their background or identity. I wanted each student to feel the text was theirs, not some ancient sacred thing they needed to treat with reverence and from a distance. Their interpretation was as valid as any professional scholar’s, their voice mattered.

To substantiate this assertion, I assigned the students to write posts on the class WordPress blog instead of academic papers. When a student writes a paper for a professor, it’s a limited exchange with a clear hierarchy. With the blog, every student reads and comments on one another’s blog posts. Moreover, the digital perpetuity of internet writing resonates thematically with the Metamorphoses, a chronology whose telos was its own author’s immortality.

Ovid finished the Metamorphoses in exile, far from those he loved, knowing that the world he once knew was gone from him forever. The teeming swirl of his epic illustrates in countless permutations the feelings of loss, alienation, and helpless rage against the capricious cruelty of those in power. If we read the Metamophoses as a metaphor, we can read it (as my students did) as an epic of trauma, about how the tragedies of life can render us numb and voiceless. Make no mistake that the pandemic is causing damage. As Jess Zimmerman has recently written, trauma accurately describes what many of us are experiencing right now: “it doesn’t hurt, it hurts all the time.”

From their individual exiles, the students’ written assignments often centered on the poem’s themes of violence, silencing, and betrayal. A student compared Achaemenides’ abandonment on the Cyclops’ island with the terrifying isolation of the pandemic. Others focused on themes of grief and rage, injustice, and death. Reading about Daphne and Io and Callisto and Europa and Syrinx, variations ad nauseam on the theme of powerlessness, communicated overwhelmingly that even while everything changes, violence and the abuse of power by those who hold it will always stay the same. 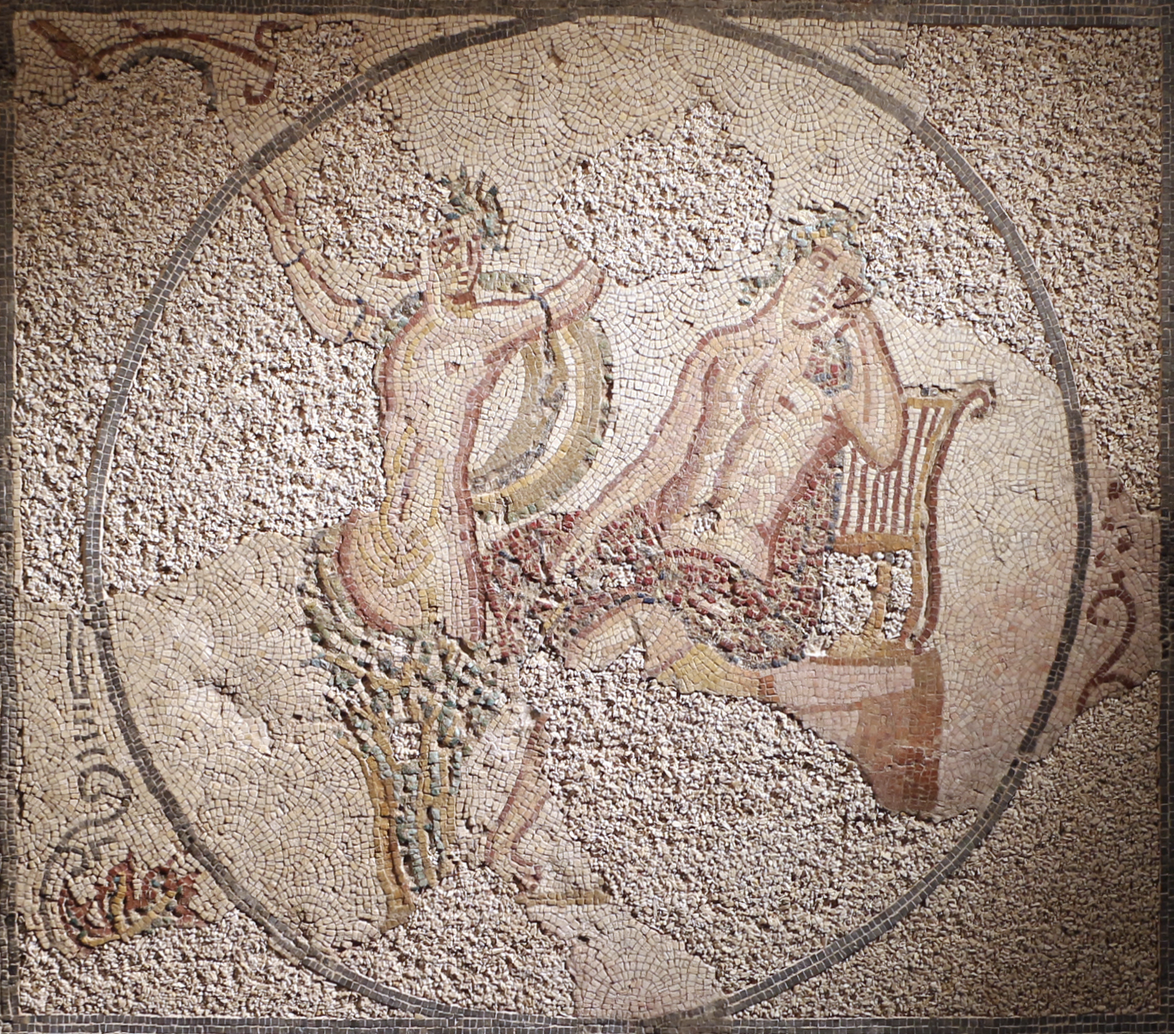 Reading the Metamorphoses, several of the students were surprised at how different the myths were from versions they’d been told as children. A student described the Met as “a gritty reboot of all the myths I heard as a kid, but like, in a good way.” I asked: why are these stories taught to children anyway? “Because they have important lessons.” I pushed harder: lessons like what? “You should be obedient even to irrational authority, women deserve to be punished for being assaulted, you shouldn’t try to excel.” These are the lessons our society wants kids to learn? We agreed: that’s messed up.

Unlike the morality tales of their childhoods, the myths of the Metamorphoses were shot through with rebellion. In drawing out these counternarratives, the students undid the past counterfactual implied by a moralistic reading. “Icarus should have listened to his father” – on the contrary, the takeaway from the myth of Icarus is not moderation and obedience, but believing in greatness more than fear. “Arachne should have kept her mouth shut” – no, actually, Arachne can teach us about speaking truth to power. The students were thinking outside of the primary narrative, imagining other possibilities than the minatory morality tales of their childhood. Ultimately, we kept coming back to the speech that the mortal Scylla makes in book 8. Infatuated with King Minos, Scylla decides to betray her father, asserting that “each person truly is her own god, and Fortune rejects cowardly prayers” (8.72). This became a rallying cry for the class, encouraging the students to think outside existing power structures and to consider the agency that individuals have in shaping this world.

These existing power structures included the established pathways of myth. For their final projects, the students wrote their own myths, influenced by or adapted from the Met, but thoroughly inhabited by our current circumstances. From our place of exile and mourning, Isabella and Kaitlyn created the aetiology of Miseria, whose baneful influence is only ameliorated by the company other people. Adam and Walter resolved the story of Iphis and Ianthe not by changing Iphis’ gender, but by transforming the city into a place that loved and welcomed the same-sex couple. Lana and Mya let Pygmalion’s ivory girl make her own decisions. And Julie and Lydia brought the #MeToo movement into the Metamorphoses in a modern remix of the Procne and Philomela story.

In our last class meeting, we analyzed the final projects just as we had Ovid’s epic. The myths became characters in an eternal version of the Metamorphoses, changed and part of a constant process of change. In the midst of isolation, disorientated and traumatized, the students nevertheless set forth new directions to old myths and wrote alternate worlds into existence.

I don’t know what’s going to happen next. Schools are starting to open and it terrifies me. It’s the worst of times, and I don’t think it will get better right away. But I have to believe that change is possible. I saw pathways to a better future in the myths my students created: we must grieve together, be openhearted, listen to those who have been voiceless, believe those who have been abused.

Unlike wishes for the past and the present, future wishes open a window to possibilities that might yet become actualities, not just possible worlds coexisting, ghostlike, with our own. Ariadne, Medea, and Dido are connected by their counterfactual wishes, but their stories don’t end with their abandonment. Ariadne becomes the consort of Dionysus and is catasterized; Medea flies off in a dragon-driven chariot; Dido joins her beloved first husband in the underworld. Even when we see the heroines at their worst of times, wishing their past undone, their stories are not over yet. Neither are ours.

Hilary Lehmann is Assistant Professor of Classics at Knox College. She is interested in Greek and Latin languages, classical mythology, gender and sexuality, race and ethnicity in the ancient Mediterranean, and classical reception.

04/13/2022
Blog: Two Years Later: “Classics” after Coronavirus?
In an April 2020 post for Eidolon, I gathered predictions on “classics after coronavirus.” Two years later, it’s...
04/08/2022
Blog: Ancient Worlds, Modern Communities: Increasing Accessibility for the Study of the Ancient World
The Ancient Worlds, Modern Communities initiative (AnWoMoCo), launched by the SCS in 2019 as the Classics...
03/21/2022
Blog: I Love You, I Hate You: A Student’s Perspective on Learning Latin
I have always enjoyed Latin class because it felt like a puzzle, much like math. Find the verb, find the noun that...
03/18/2022
Blog: Power to Punish and Authority to Forgive: Imperial State and Imprisonment in 4th-Century Antioch
Research ideas often develop out of chance encounters or unplanned circumstances. My dissertation project was born...
03/14/2022
Blog: Sampling Epic in Kendrick Lamar’s “Mortal Man”
Because it’s spirits, we ain’t even really rappin’ We just letting our dead homies tell stories for us....
END_OF_DOCUMENT_TOKEN_TO_BE_REPLACED