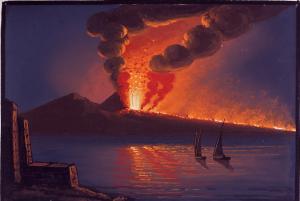 On a summer night in 64 CE a conflagration that would be remembered as the Great Fire of Rome began somewhere in the tightly-packed shops and streets around the Circus Maximus. “A disaster,” the historian Tacitus called it, “graver and more dreadful than all that have befallen this city by the violence of fire” (Annals 15.38). His account goes on to describe panic and destruction, followed by rumors, resentment, and rebuilding. Ancient responses to disasters like these are the focus of a new first-year studies course at the University of Texas at Austin, for which I am the teaching assistant. The following is a reflection on what we might do as classics and ancient history teachers to aid our students in dealing with 2017’s brutal hurricane season, in this year that Tacitus might have called “rich in catastrophes” (opimum casibus, Histories 1.2).

Hurricane Harvey made landfall as a Category 4 storm in Rockport, Texas, just a few months ago. The storm churned slowly across southeast Texas and Louisiana, flooding thousands of homes and businesses, leaving hundreds of thousands without power as the rain kept falling. When the University of Texas started classes on August 30, the sun was out over Austin, but the bad news still poured in: dramatic evacuations (some by volunteer rescue efforts like the Cajun Navy); shelters reaching capacity with overwhelming numbers still displaced; doors opening to the refugees across the state; refineries threatened, homes lost, lives in limbo.

Almost one-third of UT students come from areas directly affected by Harvey, and as the University prepared to welcome those who did not remain home with family, the usually festive atmosphere was decidedly sober. As we entered the classroom for the first day of UGS 303: “Dealing with Disaster in the Ancient World,” Prof. Rabun Taylor and I expected low attendance. Instead, we found a full classroom. The class was structured so that Prof. Taylor’s lectures provided course content and initial discussion, which was continued in my weekly sections using primary sources from the Greek and Roman worlds and news articles from our own.

During the first two weeks, alongside chapters from Jerry Toner’s Roman Disasters, we introduced Polybius on the earthquake of Rhodes (5.88–90). His message was clear: politically and economically important cities, when stricken by disaster, can expect more generosity and sooner than their lesser neighbors. We knew this to be true, as daily we heard more about donations rolling into Houston, and less about continuing suffering in Beaumont and Port Arthur.

Reading Tacitus’s (Annals 15.38–44) and Suetonius’ (Nero 16, 38) accounts of flight and confusion during the Great Fire, class discussion returned persistently to the actions of Nero. For many, this was their first introduction to the notorious emperor, and we all love a good villain, so who could blame them? Students were struck by his opening of gardens and buildings on the Campus Martius to refugees, and his offer of temporary shelters. The controversy over an allegedly less welcoming Houston megachurch had been making the rounds on social media for several days, and comparison proved irresistible. Nero’s post-fire building codes raised questions on the power of disasters to effect lasting change. Could we expect the same spirit of reform in Houston’s zoning laws? Then, of course, came the negatives: Nero only returned to Rome when the flames threatened his Domus Transitoria and, later, he built over its ruins the sprawling Domus Aurea. Tacitus assures us that any budding public goodwill quickly wilted when rumors spread of his private musical performance during the conflagration. From this bad press followed Nero’s persecution of Christians as scapegoats.

As the weeks went by in Texas, it became clear that Nero’s central role in the discussion was due to more than the outsized personality and shocking tales left us by the admittedly biased ancient authors. The actions, and inaction, of leaders continue to come to the fore, along with public expectations that their responses be swift, sympathetic, and effective. We discussed the relief efforts of Tiberius after earthquakes that struck a number of major cities in Asia Minor, and of Titus for coastal Campania after the eruption of Vesuvius, alongside responses by leaders during modern disasters: Chinese Prime Minister’s Li’s presence amid tragedy and controversy after the Sichuan earthquakes of 2008 and 2013, and the Haitian government’s inability to lead a cohesive response after the devastating earthquake of 2010. Now, in the wake of Hurricane Maria, responses of the leadership are dominating the news cycle once again. Looking to leaders during disaster—and what we expect to see there—has provided the class with a common thread. However, we are persistently confronted by persons silent in the ancient accounts—the citizens of Rome who lost their homes and lives in 64, the vigiles and volunteers who fought the blaze (Tac. Ann. 15.38). The more invisible victims of the recent natural disasters in the U.S. are similarly the ones who need to be given a voice.

This course was experimental, and its mutability and responsive nature has proven to be an asset, allowing an approach that addresses the needs and interests of our students. Though new to us, this is not by any means the first course of its kind. Tulane professor Susann Lusnia’s 2008 article on her experience teaching ancient disasters in the wake of Hurricane Katrina is a sobering testimonial which ultimately focuses on positive parallels and the incorporation of service learning. Like her, we here in Texas hope that turning a critical eye to past disasters and being conscious of the struggle of our students will not only give us another framework with which to consider ancient societies, but also help us consider modern challenges in a new light, and to act accordingly—both in our research and our teaching.

Jane Millar is a graduate student and teaching assistant in the Department of Classics at the University of Texas at Austin.