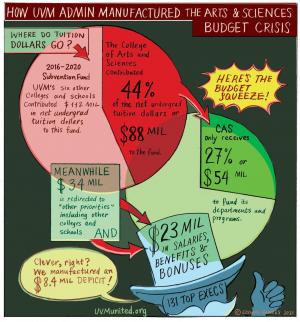 Our benefactor, with the blessing of his family, has stepped up to donate the proceeds of a modest estate that comes not from inherited wealth, but forty-five years of teaching at UVM itself. Professor Ambrose joined UVM Classics in 1962. He served as Chair from 1973 to 1992 and again from 2000 until retiring in 2006. During that time, he taught a wide range of courses at all levels of Greek, Latin, and Classical Civilization (especially mythology and literature in translation). Courses at the advanced level were in the fields of his research: Greek tragedy and comedy as well as Latin epic. Classical sources for the cantata texts of J. S. Bach led to the publication of his translation of all of Bach's vocal texts. Ambrose was Curator of Funds for the Classical Association of New England for 35 years. In 1977, he initiated the Annual Vermont Latin Day, in cooperation with the Vermont Classical Language Association.

Those interested in the story behind this gift may remember that UVM’s College of Arts and Sciences (CAS) was in the national press last year for its plans to close eight majors, eleven minors, and four MA programs, including our Greek and Latin majors, minors, and MA. I will not rehearse in detail the situation sketched out in a previous post on the SCS website (itself an update of an earlier account of ongoing austerity measures). But I would briefly report what is now better understood from further investigation by the faculty union and others, should it be helpful for others trying to understand similar predicaments elsewhere.

Two accompanying diagrams by Glynnis Fawkes clearly illustrate the so-called “budget deficit” of $8,400,000 that was established by the administration at the expense of the College of Arts and Sciences (CAS), and how CAS has been forced to respond by reducing programs, like Classics, that are otherwise healthy. 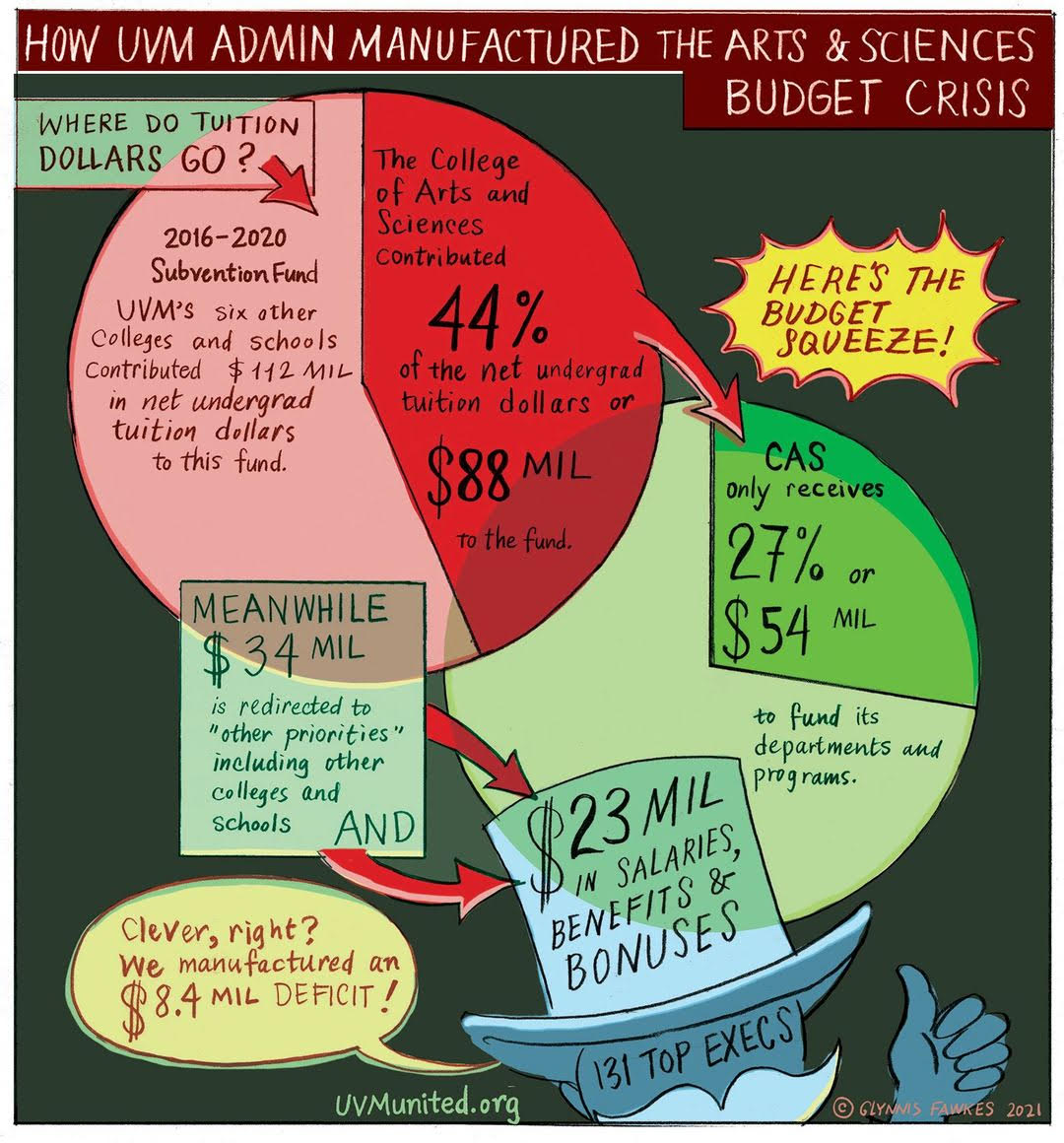 The Classics Department actually operates at a “profit,” according to UVM’s own accounting. We currently “make” 10% more, in student credit-hours taught, than we “cost” in salaries, benefits, physical space expenses, etc. This margin was considerably higher before we lost three faculty members to unreplaced retirement and contract non-renewal, since we could then mount more of the large lecture courses that always enroll well. We were, in fact, the most “efficient” of CAS’ humanities departments.

Nevertheless, closing down smaller majors and minors, regardless of performance, lets instructional resources be redeployed entirely to large service classes, once the smaller seminars needed for a major or graduate program are discarded. Lecturers can also be terminated when contracts end, so that others may be hired to serve “more popular” programs (Econ, PoliSci, Bio, Chem, etc.) that show greater “capacity.” In both cases, the goal is to attract undergraduate tuition dollars from beyond CAS itself. This imperative derives from the zero-sum, university-wide accounting system known as Incentive-Based Budgeting (IBB), analogs of which now operate in many academic institutions.

IBB’s stated initial purpose was to allow administrators to understand more clearly which units were pulling their own weight; a program would then grow or shrink with how large a slice of the tuition pie each consumed (hence “incentive”). Yet proportional distribution was never truly possible, since some units, inevitably, are more expensive than others, and need to be subsidized for the larger social and cultural good. This traditional arrangement, whereby the humanities helped to pay for laboratories, etc., was maintained in IBB by assigning CAS a ‘subvention’ of $8,400,000 per year to support other academic units (including the expensive and relatively flush medical school).

That some programs should help others is only right. But the “subvention” was always unrealistically high; meeting it has become ever harder with student (and parent) mania for pre-professional STEM degrees, which has caused sharp declines in humanities enrollments nationwide. (Note, however, that enrollments in UVM’s classics courses, and number of majors and minors, have not declined significantly.) What was once a glad contribution has become a destructive tribute. The deans of other units have been deaf to calls for change to the current dispensation, from which they derive great benefit. Yet to eliminate otherwise healthy and self-sufficient programs in CAS because we are not providing enough support, rather than to demand greater “efficiency” in the “expensive” units — not to mention the ever-inflated overhead of executive compensation (see diagrams) — betrays administrative “priorities,” i.e., value judgments (not to say greed), that are at odds both with the stated purpose of IBB and, some might feel, the social mission of a state university.

Moreover, the proposed closures yield only $600,000 in “savings” — a mere 14% of the annual “deficit.” These cuts, in other words, while seriously diminishing the curricular variety available to students — and extirpating deep-rooted campus sub-cultures — can only be the first in an ever more damaging series. Ultimately, many fear, CAS will be broken apart, with sciences joining other units while arts and humanities are reduced to a token service college. This would seem to be the “exposure to the humanities” that features ominously in President Garimella’s “Strategic Vision” for UVM. 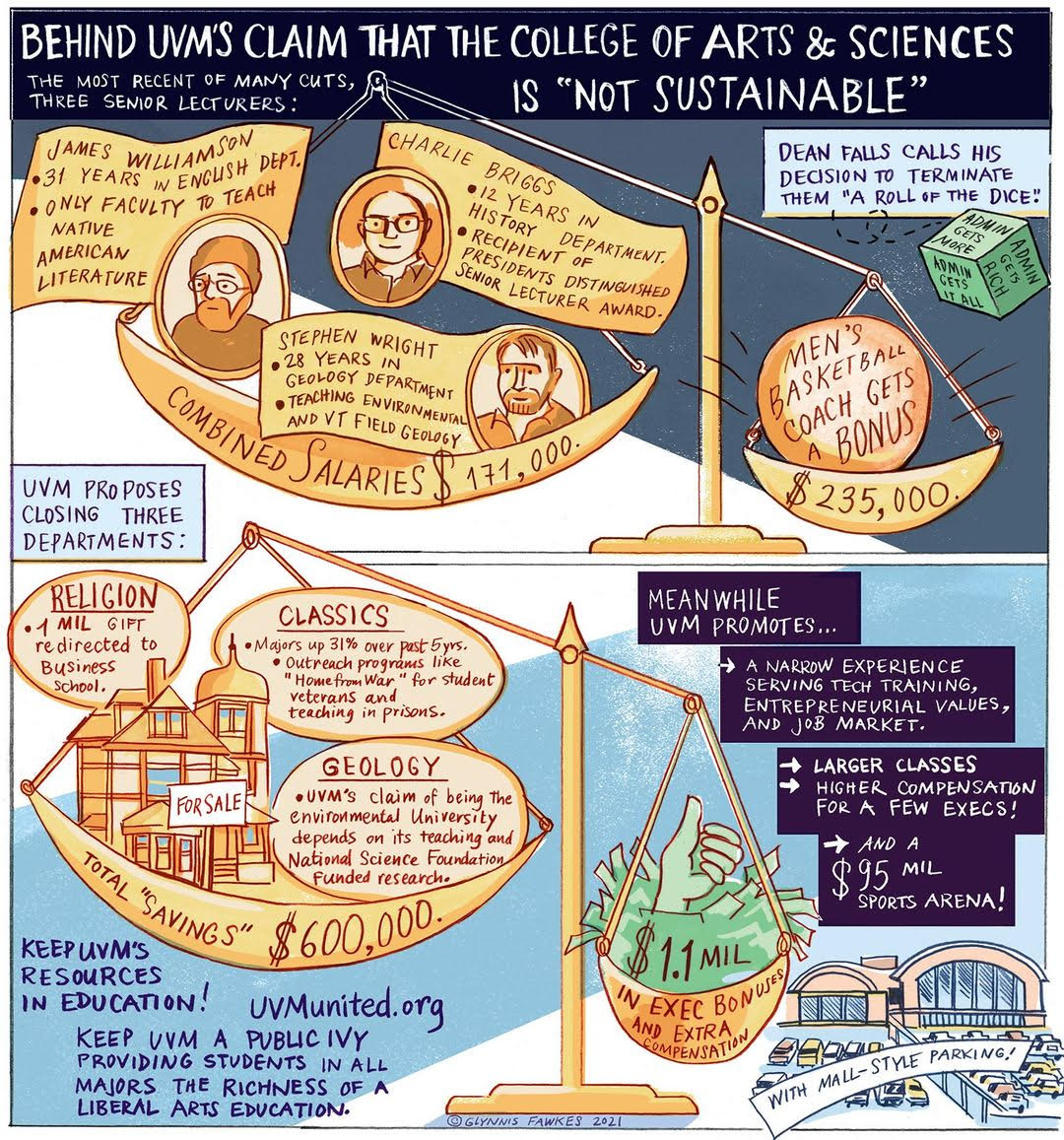 National press coverage of UVM’s announcement, largely critical, was surprisingly extensive, perhaps because it was one of the first in what proved to be a spate of such developments elsewhere during that first full academic year with COVID-19. Students, faculty, faculty union, alumni, and parents have fought back in many ways — press conferences, public demonstrations, online petitions, an endorsement from the Burlington City Council, letters of support from professional societies and generous colleagues, and an attempted intervention by the SCS itself. None of this had the least effect.

Official responses, though impressively protean, ranged a somewhat limited gamut from aggressive inertia to lazy bullying. The Board of Trustees, individually and as a body, failed to acknowledge endless letters from concerned parents and alumns. Several public information requests by the Chronicle of Higher Education were rejected or ignored. Most disturbing of all, the administration short-circuited faculty governance by threatening complete elimination of programs — and, by implication, faculty — that did not agree to a sharply reduced state through the “uncontested termination” procedure that does not trigger internal audit up through the faculty senate.

The situation changed only when Professor Ambrose came forward to defend the tradition of classics in Vermont. With two externally-funded MA students per year — assisting in large lecture halls (100+) during their first year and teaching elementary Latin in their second — we could now show that closing the MA program was actually less “economical” than keeping it open. Hard to say no when someone else will pay for a housekeeper. And so we beat back the bean-counters, at least for now — in a victory that rather resembles a company-store shakedown.

John C. Franklin is a Professor of Classics and Chair of the Department of Classics at the University of Vermont. Much of his research has dealt with early Greek cultural history at the Near Eastern interface(s), focusing especially on the interaction of poetic/musical traditions, always in hopes of elucidating broader issues. His undergraduate background, in music composition and electronic music (B.M. New England Conservatory, 1988), remains an influence: the history of ancient music technology, both physical and conceptual, is crucial to his research.

05/23/2022
Blog: Contingent Faculty Series: An Interview with Victoria Austen
Our seventh interview in the Contingent Faculty Series is a virtual conversation between Dr. Taylor Coughlan and...
04/13/2022
Blog: Two Years Later: “Classics” after Coronavirus?
In an April 2020 post for Eidolon, I gathered predictions on “classics after coronavirus.” Two years later, it’s...
04/08/2022
Blog: Ancient Worlds, Modern Communities: Increasing Accessibility for the Study of the Ancient World
The Ancient Worlds, Modern Communities initiative (AnWoMoCo), launched by the SCS in 2019 as the Classics...
03/21/2022
Blog: I Love You, I Hate You: A Student’s Perspective on Learning Latin
I have always enjoyed Latin class because it felt like a puzzle, much like math. Find the verb, find the noun that...
03/18/2022
Blog: Power to Punish and Authority to Forgive: Imperial State and Imprisonment in 4th-Century Antioch
Research ideas often develop out of chance encounters or unplanned circumstances. My dissertation project was born...
END_OF_DOCUMENT_TOKEN_TO_BE_REPLACED