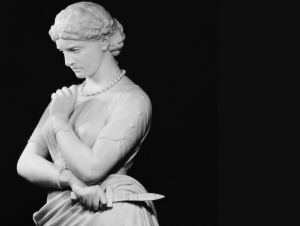 The killing of a child by a parent is the ultimate rejection of societal norms through a perversion of “normal” family bonds. In her seminal book, Powers of Horror, Julia Kristeva defines the breaking of familial bonds as an “abject.”[1] Simply put, the process of “abjection” is one where the person becomes aware of one's own physical body, and therefore becomes aware of one's own mortality. This awareness entails a further separation between the individual and the external world. As the human mind isn't fully equipped to understand this process, the end result is a loss of a sense of self. Kristeva notes that in the context of the family, the abject can be represented by a child's realization of being a physical body separate from their parents, a fact which in and of itself causes horror. She describes a similar process when one views a dead body or bodily fluids: both of these events make one's death impossible to deny, in virtue of being starkly reminded of the body as a physical creature. This recognition however brings nothing but terror, and the body of the child, alongside the child's parents, becomes violently divorced from the self.

A violent death, especially one inflicted by another human being, is also inherently dehumanizing: through the infliction of violence, the individuality and agency of the victim is annulled. The body (and therefore the person) is reduced to simple parts.[2] When this happens within the family unit, the dehumanization does not only concern the individual, but also the society within which the family exists. The act of filicide combines the breakdown of familial and societal bonds with the physical awareness of death, and with the dehumanization brought on by violent actions. This violence, when included in popular narratives, become an avatar for modern society's anxieties: as Cohen states, “this anxiety manifests itself symptomatically as a cultural fascination with monsters.”[3] More often than not, this is achieved through the deeds of “monster-like” women: women who, either of their own volition or through external influence, disrupt (and deprave) their own motherhood with acts of violence.

This process is not limited to our modern culture. When discussing different forms of love in the Nichomachean Ethics (350 BCE), Aristotle discusses the “delight mothers take in loving” and how they “seem to be satisfied if they see [their children] prospering” (NE VIII.8).[4] According to Aristotle, a mother's love does not necessarily need to be reciprocated, as it relies mostly on the child's prosperity. In general, parents “love their children as themselves” (NE VIII.12), while children view themselves as “being born of [their parents]” (ibid.), rather than extensions of their parents' selves. It is not hard to break down a mother's love, or the “child-as-self”: one only has to resort to violence.

Much like in today's pop culture, Greek theatre brought contemporary anxieties to the stage, narrativizing them, and thus forcing the audience to confront their fears. In her examination of the so-called locus violentus, the “place of violence” of Greek tragedy, Aleah Hernandez argues that violence is necessary to this narrative process.[5] Hernandez believes that much of the violence is rooted, amongst other things, in a blurring of the boundaries between perpetrator and victim, and in an emphasis on conflicts of kinship. Through these elements, the tragedy both captivates its audience and causes them cathartic discomfort.

In Euripides' Medea (431 BCE), the titular protagonist not only disrupts her own family, but also her husband's newfound one. Her violence is born out of a need for revenge, yet she is both victim and perpetrator. But her revenge pushes things too far, and, in her frenzy, Medea sees the murder of her children as a mercy. The conflict of her story relies on the disruption of “normal” kinship patterns: not only does her husband reject her, but she herself rejects family once and for all through an act of filicide. Medea alienates herself from her family (and therefore from society) through these acts of violence. The children, or rather their bodies, now stripped of personhood through murder, become the physical manifestation of the breakdown of a mother's selfless love.

Another woman guilty of filicide is found in Euripides' later play, the Bacchae (405 BCE). Here, Agave, Pentheus' mother, is stripped of her sense of self and pushed to filicide by an external force, the god Dionysos. Her loss of self finds its apotheosis in the horrific violence she visits upon her own son, and is exemplified by Pentheus attempting to force a recognition while his mother, in her delirium, tears him to pieces. Pentheus' final words, “Mother, it is I, Pentheus, your son,” (Bacchae 1115)[6] which fall to deaf ears, are the perversion of the child as a representation of one's self: he asks for his mother to recognize him, and through this recognition, remember herself. The abjection of Pentheus occurs because this recognition fails: Agave, herself driven into an animal-like frenzy, sees her son as nothing more than a wild beast, to be torn to pieces.

Filicide plays a similar role in modern horror media, and also serves a similar narrative function. In Ari Aster's Hereditary (2018), the relationship between Peter and his mother Annie becomes unbearably tense after Peter accidentally kills his sister Charlie in a freak accident. The slow breakdown of the mother-son relationship takes center stage. Annie is plagued by guilt: for initially not wanting Peter, for blaming Peter for Charlie's death (even though it was an accident) and, most importantly, for attempting to murder Charlie and Peter during a bout of sleepwalking when they were younger. Peter, conversely, is trying to navigate the guilt of what he's done to Charlie, his mother's resentment towards him, and the trauma of Annie trying to kill him and his sister all those years ago. The family, already destabilized by Charlie's traumatic death, becomes the perfect hunting ground for Paimon, a demonic entity summoned by the cult Annie's mother Ellen Leigh was once part of. Annie and Peter's relationship comes to a head in the climax of the film. Now fully possessed by Paimon, Annie chases after Peter throughout the house, until she confronts him in the attic and decapitates herself to allow the demon to travel from her into her son. Peter, meanwhile, begs for her forgiveness, thinking she has come to finish the job she started all those years ago.

In Annie's two acts of violence against her children, we find echoes of both Medea and Agave's. When Peter asks Annie why she tried to kill him and Charlie, she answers that she wanted to save them from the cycle of abuse and mental illness her family has been trapped in for generations. Similarly, Medea justifies her murder by claiming the children would have been killed anyway, and much more violently, by Creon's men: her murder of her children is an excess of motherly love, her selfless devotion pushed beyond its limits and brought to a mad, violent conclusion. Much like Agave, Annie is eventually possessed by a supernatural entity. This entity, a demon, forces Annie to actively participate in the abjection of her son. The breakdown of the family becomes fully actualized through an act of possession, which effectively removes Peter's personhood, as he is the final vessel for Paimon. In the Bacchae, Dionysos' possession of Agave makes her view Pentheus' decapitated head as that of a lion, parading it around as a monstrous hunting trophy.[7]

Both in tragedy and in horror, violence, especially mother's filicide, becomes a storytelling tool to explore societies' anxieties concerning parenthood and, in particular, the relationship between the mother and the child. By viewing horror as a cultural successor to Greek tragedy – both are cathartic forms of art, both make use of violence as a narrative tool, both aim to question and investigate contemporary society and identity – we are able to trace the ways in which these factors have, or haven't, changed.

[5]   See Hernandez, A. (2017). The Horrors of the Unseen: Depictions of Violence in the Iliad and Greek Tragedy. University of California Irvine.

[7]   Ari Aster, the director of Hereditary, also has a thing for severed heads. [Warning for graphic depictions of gore at the link].

Justin Lorenzo Biggi received his BA in Ancient Greek from Oberlin College in 2019. He is currently working on his Masters by Research at the University of Edinburgh. His research interests focus on the intersection of language, society, and culture, and how the language of epigraphy can be used as a tool for better understanding the identity of the Athenian citizen in the 5th century BCE.

04/13/2022
Blog: Two Years Later: “Classics” after Coronavirus?
In an April 2020 post for Eidolon, I gathered predictions on “classics after coronavirus.” Two years later, it’s...
04/08/2022
Blog: Ancient Worlds, Modern Communities: Increasing Accessibility for the Study of the Ancient World
The Ancient Worlds, Modern Communities initiative (AnWoMoCo), launched by the SCS in 2019 as the Classics...
03/21/2022
Blog: I Love You, I Hate You: A Student’s Perspective on Learning Latin
I have always enjoyed Latin class because it felt like a puzzle, much like math. Find the verb, find the noun that...
03/18/2022
Blog: Power to Punish and Authority to Forgive: Imperial State and Imprisonment in 4th-Century Antioch
Research ideas often develop out of chance encounters or unplanned circumstances. My dissertation project was born...
03/14/2022
Blog: Sampling Epic in Kendrick Lamar’s “Mortal Man”
Because it’s spirits, we ain’t even really rappin’ We just letting our dead homies tell stories for us....
END_OF_DOCUMENT_TOKEN_TO_BE_REPLACED