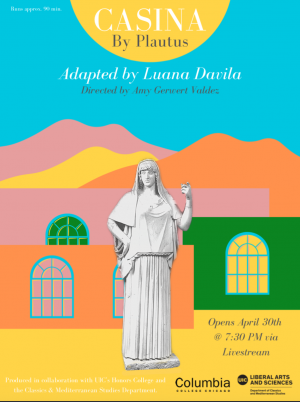 Throughout this project I was focused on two things: staying authentic to Latinx culture and remaining true to the Roman original. In accomplishing these two things in an enjoyable, successful production, I proved the relation in machismo between Roman and Latino men.

KB: What was your initial inspiration?

LD: The idea for this project actually came to me completely by accident. I am very good friends with this production’s director, Amy Gerwert Valdez. He and I were discussing how I was reading Roman comedies for an independent research study I was doing at the time, and Amy told me about a Latinx project he worked on in the past. That’s when I got the idea: Why don’t we collaborate on something? At the time, Amy had yet to figure out what he was doing for his big D4 final directing project, and I had no idea what my final capstone project would be. Since I had the incentive to create a play like this, and Amy had the resources and production capability, it made sense for us to create this dynamic piece.

KB: Why did you choose Casina, in particular?

LD: After reading many, many plays, Casina was the one that stood out to me. I did not want to write and research a play where the men had a happy ending. If you are familiar with Roman comedy, you’ll know that they are full of misogynistic stock characters (the senex, clever slave, prostitute, etc.). Casina was different (for the most part). The women really drive the plot, and the stock characters that exist in this genre of plays did not exist so much in Casina—well, that is not entirely true. The stock characters were there, but they don’t fill their traditional roles (e.g., Cleostrata, the matrona, comes up with the plans instead of a clever slave).

KB: Can you describe your adaptation process?

LD: As I have said, I wanted to change the storyline as little as possible. However, I wanted to create complex characters, characters that could not easily fit into these stock roles, just as Plautus did when he adapted the original Greek play. I would say that I am proudest of the Casina character that I created. In the original, Casina is not present on the stage, and she presumably ends up with Euthynicus, because he’s the adulescens. In my production, I brought Casina and Nicanor (previously Euthynicus) on stage through flashback scenes, and they have a beautiful love story. More importantly, Casina has a voice, hopes, and dreams. 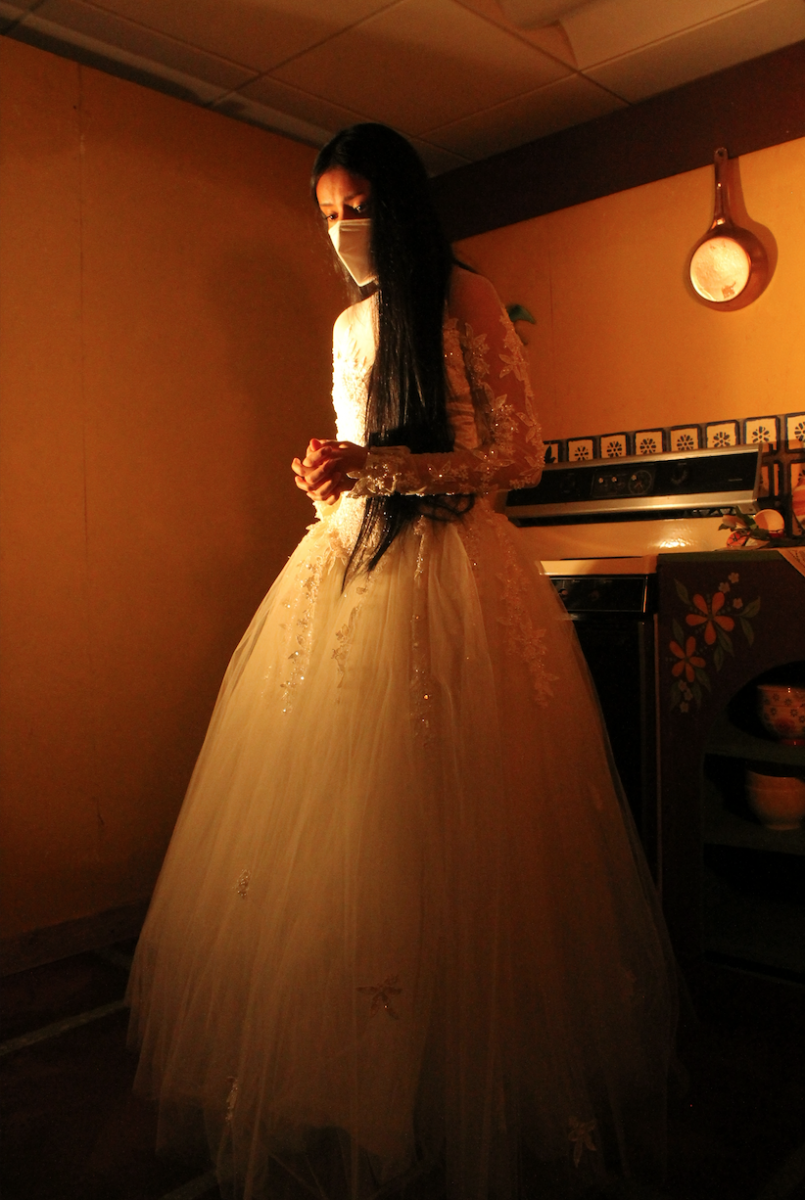 KB: It’s interesting that you chose to reincorporate Casina and Nicanor/Euthynicus’ relationship. What did your choice bring to the production?

LD: In bringing their story to life, I was able to shine a small bit of hope into this modern production. By giving Casina and Nicanor a happy, satisfying story, I hoped to show a new generation that can break free from the cycle of trauma that most children of immigrants carry with them.

KB: How did you choose your characters’ names?

LD: I did some research and some translation work on the original names then attempted to translate as directly as I could to Spanish. I would say that the oddest one by far had to come from the character of Chalinus. His name translates roughly to “the bit that goes into the horse’s mouth.” I translated that to Riñones, which literally means “reins.”

KB: Was there tension between the conventions of the telenovela genre and Roman comedy?

LD: Since telenovelas are generally quite dramatic on their own and Roman comedy is ridiculous, there wasn’t a huge shift in energy. One scene in particular that kept the same chaos was the lot drawing/loteria scene. In my adaptation, it became a huge argument breaks out into overlapping conversations that cause a slapstick-like comedy scene that could have been pulled straight from the original.

KB: Your adaptation includes a sensitive look at how machismo contributes to toxic, self-destructive behaviors among the queer men and male-presenting folks. Can you tell us about the relationship between Don Martin (Lysidamus) and Eugeneo (Olympio)?

LD: In the original Casina, there’s small bit of homoeroticism in the dialogue between Lysidamus and Olympio, and in the moment at the very end where Chalinus is dressed as “Casina.” I took this and ran with it. In my adaptation, having Don Martin and Eugeneo involved with one another somehow made perfect sense. These are the two men that seem the most concerned with their manhood, and I figure that they must be overly macho to compensate for their inner shame. This also connects to the culture of shame in ancient Rome regarding active/passive roles in relationships. It is an unfortunate thing, really, though I don’t blame them. I believe that people are inherently good, and that society molds them to behave unfavorably. Their relationship and the way they chose to handle it are completely a commentary on how society (particularly Latinx society) chooses to see them. If they feel shame, it is because others make them feel as if they are shameful. 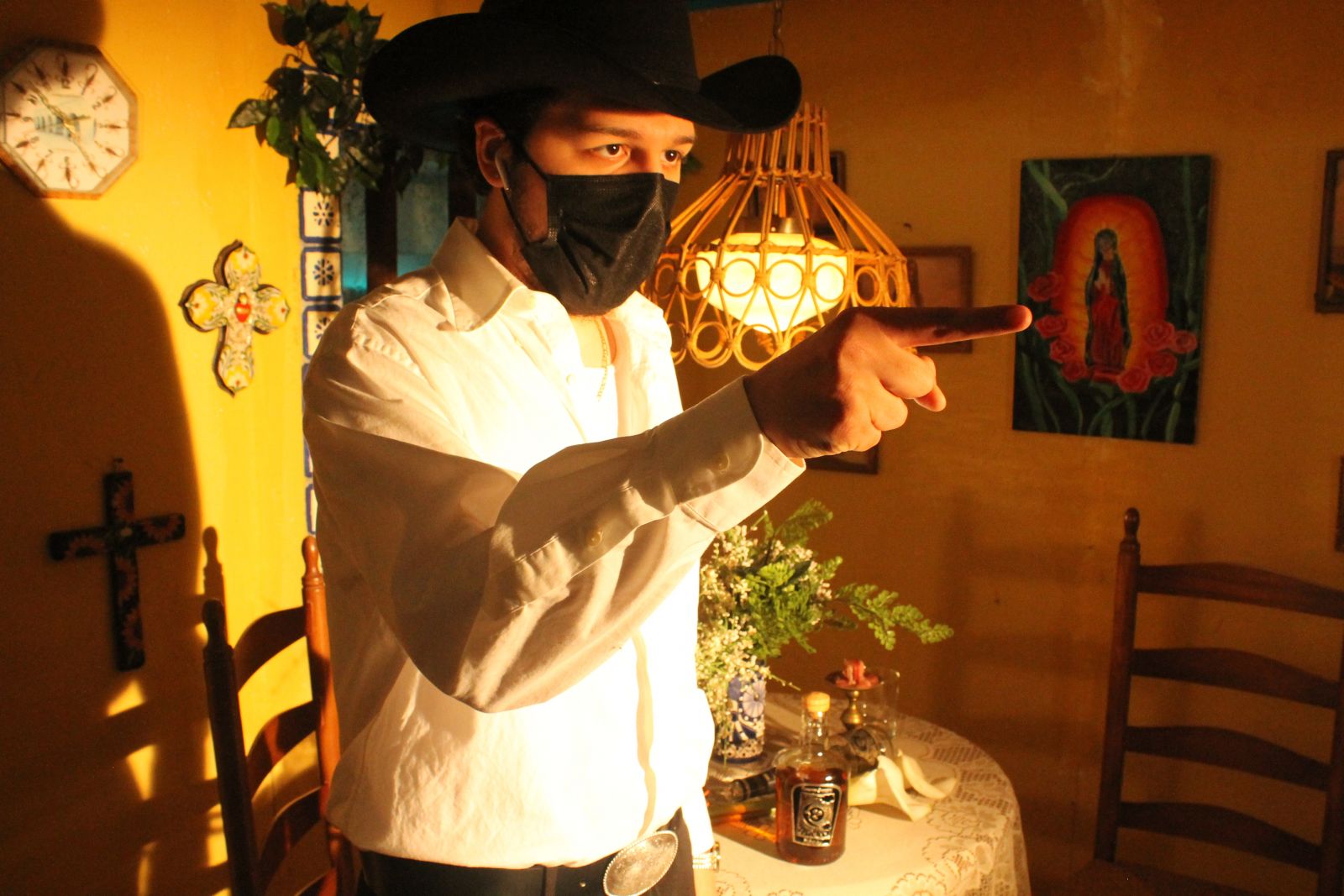 KB: A question for the director, Amy Gerwert Valdez: was this your first time working with ancient drama?

Amy Gerwert Valdez: Yes it was! Much of my work beforehand has been magical realism. At the time, my professors were very excited and surprised at my choice to work on Casina, since I hadn’t shown an interest in ancient stories or even adaptations. Luana presented this project to me with very good timing, because I had been looking for my D4, and I knew I wanted to take a different route from my usual work. I knew very little about ancient plays; my works usually dealt with new or contemporary works. After reading Plautus’ original work and discussing it with Luana, I knew it was something I wanted to tackle.

KB: Can you describe your production process?

AGV: I had a very specific vision for what I wanted with design, filming, and editing. The semester before, I had done another show under COVID-19 restrictions, so I had some point of reference for what needed to be done and how to do it. Filming Casina was different from my last show because I had many more actors and, due to scheduling conflicts, not as much time as I would usually be allowed for the process. I am very grateful to my designers and stage management team, who assisted me with covering areas I couldn’t see. I did the editing alone, which became its own problem, mostly with my technology. Macbooks weren’t meant for that kind of work.

LD: Columbia, of course, supplied us with our incredible cast of actors, along with our amazing set designer, Rose Johnson (assisted by Jaysen Giroux), our costume designer, Mary Watkins, and our lighting designer, Rowan Zinn (assisted by Rolando Ciseneros), along with our performance spaces. UIC’s Classics department (headed by Dr. Young Kim) awarded me a generous grant so that my designers could create their vision and bring our production to life.

Having this production pre-filmed really allowed the audience to see our performers’ minor changes in facial expression, which was a huge plus. I was also able to create original music and have it edited in, allowing me to add another personal touch.

LD: I think the biggest thing I took from this production was a different outlook on my own characters. Often, when sitting in on rehearsals, I learned the way the performers thought about what was going on with their character and all of their character’s relationships.

AGV: Overall, I found this show extremely rewarding. Not just working with my wonderful cast and team, but being a part of a new type of project I haven’t seen done at Columbia. I have hopes that this project will lead others to do that collaboration they’ve been wanting to do. It could be one of their favorite projects ever.

Luana Davila (she/her) is an alumna of the University of Illinois at Chicago with a BA in Classical Studies and a minor in Arabic. She has spent her final year at UIC adapting the ancient Roman play Casina by Plautus to fit the setting of a small ranch town in modern day Mexico. To fund this project, Luana has received the Raymond C. Zelazny Humanities Scholarship. Upon completion and reception, Luana's Casina has earned her special honors from the University's own Honors College.

Amy Gerwert Valdez (He/She/They) graduated from Columbia College Chicago with a BFA in Theatre Directing. He has directed a number of shows and feels passionate about showcasing works that focus on Latine cultures and diversity. Their previous shows include The Hero and the Lost Boy by Estefania Unzueta and We Will Not Describe the Conversation by Eugenie Carabatsos. Casina was his last directing project at Columbia.

Krishni Burns is Lecturer of Latin at the University of Illinois at Chicago in Chicago, Illinois, US. Her main areas of study are ancient religion and the lives of women in Republican Rome, as well as the expression of classical myth in children’s popular culture. Her current book project is Bringing Their Mother Home: Roman Multiculturalism and the Mother of the Gods. She participates in the European Research Council project Our Mythical Childhood and chairs the Committee on Ancient and Modern Performance (CAMP).

04/13/2022
Blog: Two Years Later: “Classics” after Coronavirus?
In an April 2020 post for Eidolon, I gathered predictions on “classics after coronavirus.” Two years later, it’s...
04/08/2022
Blog: Ancient Worlds, Modern Communities: Increasing Accessibility for the Study of the Ancient World
The Ancient Worlds, Modern Communities initiative (AnWoMoCo), launched by the SCS in 2019 as the Classics...
03/21/2022
Blog: I Love You, I Hate You: A Student’s Perspective on Learning Latin
I have always enjoyed Latin class because it felt like a puzzle, much like math. Find the verb, find the noun that...
03/18/2022
Blog: Power to Punish and Authority to Forgive: Imperial State and Imprisonment in 4th-Century Antioch
Research ideas often develop out of chance encounters or unplanned circumstances. My dissertation project was born...
03/14/2022
Blog: Sampling Epic in Kendrick Lamar’s “Mortal Man”
Because it’s spirits, we ain’t even really rappin’ We just letting our dead homies tell stories for us....
END_OF_DOCUMENT_TOKEN_TO_BE_REPLACED