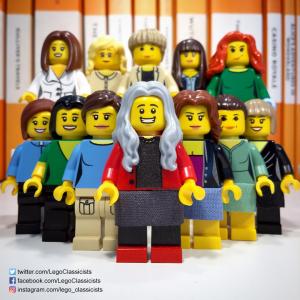 It was a celebration of the ancient world and the work of classics and ancient world scholars that exceeded my expectations, and it showed how much scholars from around the world love their work and are keen to share it, and the social media event produced an atmosphere of intellectual creativity, joy, interdisciplinarity and mutual connection and respect.

I began Lego Classicists, which operates on three social media platforms, to play with history and highlight the work of international ancient world scholars and to help the general public engage with the ancient world. In a quite short time it has become an international phenomenon and I believe that this is because most people can relate so easily to Lego, which has the ability to break down barriers and provide a means of mutual engagement, celebration, diversity and inclusion. In modern academic practice, scholars are now expected not only to do the research, writing and teaching they’ve always done, but also to engage on the internet through blogs and social media. By harnessing the power of social media, I hope that Lego Classics helps to bring the international community of classicists together in a way that encourages mutual respect and also produces considerable outreach for their own work and the study of the ancient world generally.

I make portraits of scholars and others involved in some way with the study of the ancient world (like librarians, curators, conservators and archivists) in Lego mini-figure form, which are then photographed and posted on social media with some information about the person being honored. The portraits take some months to research and produce – in the case of Lego Mary Beard it took about 18 months to get her just right (starting the design on 2nd Sept, 2016) – and there are currently about 70 members of the Lego Classicists family. I choose each subject because I have been inspired by them or their work, or someone suggests a possible subject to me, and I find them interesting. I make two portraits of each person I turn into a Lego Classicist, one to send as a gift to the person being honoured, and one for my own archive of figures. They are never sold. Lego Classicists is my hobby, albeit becoming a very consuming one, and I work in my own time with my own money.

I have been surrounded by the ancient world all my life through my parents and their friends, but I am not a classicist myself, although I work in the area of history as an historical archivist, and my background is in the discipline of filmmaking, I think this gives me a perspective that allows me the artistic freedom to choose and interpret the figures in my own way. I also think that the medium of Lego, so novel to the interpretation of history, helps to provide a perspective that allows us to see and interpret in new ways.

Lego Classicists also attempts not only join people and ideas together, but to provide a social media venue in which other pop-cultural interpretations of the ancient world can be brought together, interspersed between the Lego Classicists portraits. Recently, for example, I have been liaising with Ubisoft Quebec, producer of the highly sophisticated and popular computer game Assassin’s Creed Odyssey, and a number of posts have appeared which relate to the makers of the game, its conception and its historical foundation.

Since it began in 2016, Lego Classicists seems to have struck a chord with the international classics community, and it also has a wider appeal. When I posted my Lego Mary Beard on my Facebook page in early 2018, the image went viral overnight and was written about by BBC Online. Lego Classicists has also been featured in the 50th Anniversary volume of the German archaeology magazine, Antike Welt, in the journal of the Society of Antiquaries London SALON and by Cambridge University. Quite recently, Prof. Mary Beard herself used her Lego Classicists Mary Beard on her BBC television show, Front Row Late (see https://twitter.com/BBCFrontRow/status/1088912240810606593 25th Jan, 2019) and the show’s producers made an animation of my figure to promote the episode.

In 2018, I collaborated with a number of international scholars including Roman scholar and Pompeii and Herculaneum specialist Prof. Andrew Wallace-Hadrill (Cambridge), J. Paul Getty Museum Direcor, archaeologist and art historian Dr. Timothy Potts and Egyptologist Prof. Kara Cooney (UCLA) when I was invited to takeover the J. Paul Getty Museum’s Instagram account, which provided an excellent opportunity to bring the work of these scholars to Getty’s wide arts and general audience.

Lego Classicists began just as a way for me to incubate ideas and wind down after my ‘real’ work when I began to make mini-figure portraits of classicist friends just for fun. The portraits had such an effect on the recipients and their friends and students that I began to make more. The turning point was when I made a Lego portrait of Michael Turner FSA, a departing gift for the then Senior Curator of the University’s Nicholson Museum which is said to house the largest collection of antiquities in the southern hemisphere. Michael Turner is responsible for the creative design of the three world-famous Lego models of ancient sites, Lego Colosseum, Lego Pompeii and Lego Acropolis, which is now at the Acropolis Museum, Athens. Turner is a key inspiration of Lego Classicists.

It was at that point that I realized I had created “something”, and soon I thought it would be ironic to give my growing family of Lego Classicists their own Facebook page. It was a shock to me that within a few months I had hundreds of followers, and now of course, the number has grown to thousands and Lego Classicists is also on Instagram and Twitter.

There does seem to be some suspicion among a few scholars that the interpretation of the ancient world in Lego form might be somehow trivializing ancient world scholarship, but it is my firm belief that Lego provides a medium with which the ancient world can be celebrated by a diverse range of people, and a more sophisticated use of Lego which encompasses play, research and scholarship, satire and inclusion can be an extremely powerful tool for engagement, understanding and connection. Recently, I collaborated on a paper that was presented at the Plenary Session of the Australasian Society for Classical Studies conference at the Australian University of New England, “Lego Classics: Serious or Superficial?” by Lynette Jensen (7th February, 2019) which addressed the serious use of Lego in classics and other disciplines and arts practice and that led to an interesting and enthusiastic discussion during question time.

The over-whelming positive reaction to “my little hobby” has been very humbling to me and it is a great joy not only to produce the portraits in the medium of Lego, but also to meet and interact with so many scholars, students, artists and ancient world aficionados who make up a world-wide community. My attraction to the ancient world is based on its ability to show us the commonalites and connections between human beings across place, time and cultural contexts and I hope that my work in Lego reflects this.

From a small group of portraits of Australian classics scholars who were friends, Lego Classicists has grown in a relatively short time to include people from around the world. In the Lego Classicist family there are already women and men involved in ancient world study from a variety of countries across the world, and this year it is my plan to induct more American scholars into the Lego Classicists family and to more fully reflect the wide cultural base of ancient world scholarship. Hopefully, the “serious play” of Lego Classicists can help develop understanding of the past in a novel but genuine way and portray the rich and diverse cultural reality and possibility of the ancient world and all the people who study it.

Liam D. Jensen, a.k.a. The Lego Classicist, is an historical archivist with a background in fimmaking. He specialises in the curation of Australian Daybill film posters and was for many years historical archivist and curator for Greater Union Theatres, the Australian cinema chain which played a foundational role in the history of cinema. He currently works independently and is responsible for the archiving and presentation of the Lynette Jensen Collection of original historical engravings and photographs, which is represented in a number of international collections including the University of Oxford and the British School at Athens. Liam D. Jensen has curated a number of Australian Daybill film poster collections which are now in international collections including the British School at Rome and currently, his exhibition Ben-Hur to Brian, examining the early Christianity period of the ancient world in film, is on exhibition at Macquarie University’s Museum of Ancient Cultures, Sydney.

04/13/2022
Blog: Two Years Later: “Classics” after Coronavirus?
In an April 2020 post for Eidolon, I gathered predictions on “classics after coronavirus.” Two years later, it’s...
04/08/2022
Blog: Ancient Worlds, Modern Communities: Increasing Accessibility for the Study of the Ancient World
The Ancient Worlds, Modern Communities initiative (AnWoMoCo), launched by the SCS in 2019 as the Classics...
03/21/2022
Blog: I Love You, I Hate You: A Student’s Perspective on Learning Latin
I have always enjoyed Latin class because it felt like a puzzle, much like math. Find the verb, find the noun that...
03/18/2022
Blog: Power to Punish and Authority to Forgive: Imperial State and Imprisonment in 4th-Century Antioch
Research ideas often develop out of chance encounters or unplanned circumstances. My dissertation project was born...
03/14/2022
Blog: Sampling Epic in Kendrick Lamar’s “Mortal Man”
Because it’s spirits, we ain’t even really rappin’ We just letting our dead homies tell stories for us....
END_OF_DOCUMENT_TOKEN_TO_BE_REPLACED