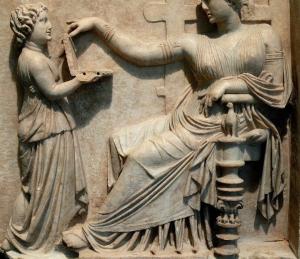 Hackathons, events where software developers gather together to create in community a usable piece of computer programming in a short frame of time, are common occurrences in tech circles. One hosted this past February by the College of the Holy Cross, however, was the first time I’d seen this type of group work applied to translating ancient manuscripts.

The postcard arrived in my faculty mailbox sometime in late November, in the lull between senior recommendations for college and the onset of winter exam prep. I thought the invitation was interesting, and tacked it up on the bulletin board in my office as a reminder to talk to my students about this opportunity. It was the first notice I’d received that Hannah Nguyen, a junior at the College of the Holy Cross in Worcester, Massachusetts, was putting together a remarkable event, sponsored by the Holy Cross Manuscripts, Inscriptions and Documents Club (MID), a student-led group dedicated to translating, studying and producing “incompletely published primary sources.”

Nguyen, along with Classics professor and Neel Smith, advisor to the MID, intended to bring the works of the club to a new audience: high school Latin students. For the next few weeks, I cajoled my students into attendance, highlighting the historic nature of the Hackathon and the rarity of such training opportunities for students their age.  On February 24, the Concord Academy bus rolled up to Holy Cross with seven students onboard, including two eager freshmen from my Latin I class who’d talked their way into the group.

To be honest, as a teacher, I was uncertain as to how students who were just starting to learn grammatical constructs would fit into the translation process. My previous experiences with digital humanities (commonly called DH) had prepared me for these younger students being overwhelmed by the combination of technology and ancient texts. And yet, high school students take to coding and manuscript markup like ducks to water, as I quickly learned. It was remarkable to watch two beginning Latinists integrate the lecture material, apply it to the manuscript, read forms they’d just learned the week before (perfect verbs!), and then retranslate the page we were working on by themselves at the end--not for a grade but for the sheer joy of piecing together the language they’d just started learning from an original manuscript page.

As the manuscript hackathon demonstrated, students are able to easily learn, integrate, and apply the digital and analog lessons they are taught in a short span of time. A senior admitted that he’d been frustrated with me for the first hour for guilting him into not dropping out the day before. Once everything clicked, he realized that this event was perhaps one of the coolest things he’d ever seen in Latin, combining technology with translation as students and teachers alike worked on the Bern Paleologus manuscript and learned principles of XML markup, verification, and codicology from Professor Smith and their team leaders.

Having attended both the AIA-SCS pre-conference workshop on digital humanities and now this event, there were both commonalities and differences. While the two events targeted differing groups of learners, there were similar pedagogical intents in terms of agency and collaboration. Both exemplified that it is imperative to train students of all levels in crowdsourced efforts for classical studies and to allow all willing participants to take a seat at the digital table. Digital citizenship and collaboration should be free, open, non-hierarchical, focused on the projects themselves, working to bridge divides.

The Hackathon also demonstrated some lessons going forward. One suggestion for all DH events: digital platform setup, especially for new users, is an extraordinarily important part of the seminar; designing a good installation help document is perhaps as important as the sequence of the day itself. While I realize this is all new and frequently custom tech, having it easy and accessible is essential to allowing people into this new set of tools. It’s also important to have an outlet for users to use the skills they’ve acquired immediately for practice. Like any good lesson, learning objectives are reinforced by the chance to use the acquired skills.

What became clear through the Holy Cross manuscript hackathon is that there is an appetite for digital humanities at both the high school and college levels. My students can’t wait to do more. They’re all eager to be involved in future DH projects and willing to contribute their talents and their insight to the classics sphere. Perhaps one of the greatest gifts younger students have to contribute is sheer enthusiasm.

We cannot lose sight of the fact that these students will also be college applicants in only a few short years; they are our future classicists. If we want to continue to evolve our field and promote the study of antiquity and ancient languages, we must first recognize that the engine for this interest begins far before the freshman year of college. The new age of classicists are themselves “digital natives” who have the ability to interact with and contribute to our field in new and exciting ways. What it will require is for teachers, digital humanists, and professors to meet students where they are and kindle the flame of Classics early on through participation and digital praxis.

Header Image: Gravestone of a woman with her attendant (100 BCE). Getty Villa (Image via Wikimedia under a CC-BY-SA 3.0 License).

Liz holds a Ph.D. in late antiquity from Yale University and has taught Latin and Greek at the high-school level for the past eight years. An enthusiast of inclusive and expansively defined classics, Liz currently teaches Latin and Greek at Wyoming Seminary in Kingston, PA.

04/13/2022
Blog: Two Years Later: “Classics” after Coronavirus?
In an April 2020 post for Eidolon, I gathered predictions on “classics after coronavirus.” Two years later, it’s...
04/08/2022
Blog: Ancient Worlds, Modern Communities: Increasing Accessibility for the Study of the Ancient World
The Ancient Worlds, Modern Communities initiative (AnWoMoCo), launched by the SCS in 2019 as the Classics...
03/21/2022
Blog: I Love You, I Hate You: A Student’s Perspective on Learning Latin
I have always enjoyed Latin class because it felt like a puzzle, much like math. Find the verb, find the noun that...
03/18/2022
Blog: Power to Punish and Authority to Forgive: Imperial State and Imprisonment in 4th-Century Antioch
Research ideas often develop out of chance encounters or unplanned circumstances. My dissertation project was born...
03/14/2022
Blog: Sampling Epic in Kendrick Lamar’s “Mortal Man”
Because it’s spirits, we ain’t even really rappin’ We just letting our dead homies tell stories for us....
END_OF_DOCUMENT_TOKEN_TO_BE_REPLACED