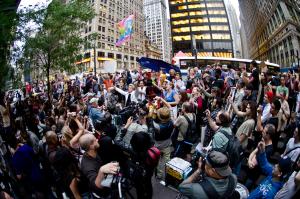 Encouraged by the success of my Sparta course, I began designing a similar course on Athens. My hook was to make the syllabus a virtual blank slate, putting the power in the hands of the demos (in this case, the class). At the start of semester, the syllabus listed one test (the final), which constituted 100% of the grade. Policies and procedures were limited to those the university required, readings were broken down by week; otherwise, students were granted total democratic powers to structure the course. The demos could vote to add more assessments and course policies as well as define the day-to-day classroom experience, but, they would be held accountable for the material on the syllabus regardless of how class was structured.

It was a disaster. Early on, the students decided only half of class time should be spent in lecture; however, because the students never passed legislation about proper classroom behavior despite my suggestions, many were online or on their cell phones while I talked. The other half of class time was designated for "open discussion" concerning various policies that swiftly descended into daily brawls, not unlike those on the Jerry Springer show. The debate whether to repeal a required attendance policy passed early in the course raged for most of the semester. Little was accomplished. Eventually a mid-term exam was voted in, but it was regularly postponed until it was given only a few weeks before the final exam.

Midway through the course, about fifty students grew tired of the dysfunction and formed an oligarchy (many were veterans of the Sparta course, providing some nice historical echoes). The oligarchs met outside of class to study and, once invited, I was glad to come and do some actual teaching. The rest of the class began to slide into a panic as the final approached. During the last few weeks I tried to use the students’ fear to their own advantage, offering them a comprehensive study guide for the exam on the sole condition that they institute a classroom technology ban for the rest of the semester. To my utter shock, it was voted down. Though the "oligarchs" passed with flying colors, the grades for the course overall were far worse than those in the Sparta class; the course average remains to this date the lowest of any general education course I have ever taught.

Afterward, I gave a public lecture on these classes discussing my intentions, some anecdotes from the way things had turned out, and conclusions I had drawn from the experience. It seemed, I said, that undergraduate students did not respond well to democracy. Or rather, when offered it, they were drawn towards the sort of democracy that upset thinkers like Thucydides and Plato: mob rule, not empowerment. Preoccupied with their own immediate self-gratification, students in the Athens course ultimately achieved little. In the closely regulated Spartan course, though, where laws were enforced (sometimes harshly) from the top down, fewer freedoms resulted in a happier and more productive population. I was not—and am not—willing to chalk this all up to a deeply cynical view of human nature. I argued, rather, that the responsibility for this result might partly lie with the educational system. We were failing to educate students on what democracy was and how best to function within it.

A few days later, I found myself in the Dean's office defending my conclusions; she told me certain people at the lecture were upset to hear a college professor promoting such un-American values and apparently denigrating democracy.  I insisted that, conclusions aside, I was (and remain) a firm supporter of democracy. I suppose I was convincing enough as I kept that job a little longer.  Ironically, I was asked to teach the Sparta class again, but never the Athens class. Since then, I have taught the Sparta course twice more at my new institution; each time the results have been roughly the same: high grades, positive overall student response, and the general student assessment that more rules and less freedom make for better results.

Now, for the first time in years, I am teaching the Athens class again. I included a few more structural guidelines to try and nudge the class toward best practices, but these were largely rescinded within the first few weeks. Consequently, this second manifestation of the course is (at this moment) moving in a similar direction to the first.  I am excited and nervous to see what happens, but I'm also feeling a greater sense of urgency, especially during this election cycle. The American people are deeply divided, both inside and outside the classroom. Some seem to want an extreme form of democracy; others seem to find the Spartan model of xenophobic law and order more attractive than ever. Democracy may be taken for granted by both students and citizens, but I'm beginning to worry that many are not very good at it, or even know how to approach or think about it properly. If I have learned anything from these classes on ancient Athens and Sparta, it is that maintaining a functioning democracy, although worthwhile, is not easy. One of our most important jobs as classicists today may well be to train citizens to participate skillfully in a democratic society.

Mike Lippman is an Assistant Professor of the Practice at the University of Nebraska, Lincoln. His work focuses on Ancient Drama, particularly Aristophanic Comedy. Other areas of study and teaching include: Classical Reception, Ancient Athletics, Petronius and Plato. His recent translation of Frogs (co-translated with Diane Arnson Svarlien) was just directed at Randolph College. He is currently working on a book about the modern application of ancient Greek thought. mlippman2@unl.edu