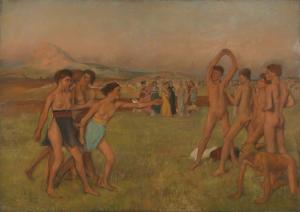 "This university does not promote fascism! We support democracy here!" I was in a Dean's office, trying to talk my way out of being fired on the spot. It started innocently enough. After the wild success of the film 300, I had thought that a large (500 student) lecture course on Sparta might be popular and help recruit majors, plus high enrollment keeps administrators off our backs and justifies our existence in the face of potential budget cuts. Still, I wanted to bring in this popular culture element without sacrificing educational quality, as well as try and make the large, lecture course simulate my preferred small, discussion-based ones. To do this, I created an experiential classroom in which course structure and daily interaction paralleled Spartan society. Students thus were to learn via an approximation of the agoge in the hope that the Spartan system might become a little more personal.

I assigned Herodotus, Thucydides, Plutarch, and Cartledge, as well as some Plato, Orwell and Huxley to illustrate how Sparta was a model for later utopias and dystopias. Ninety percent of the class grade consisted of two exams: a midterm of forty questions and a final exam of fifty. All questions were to be answered with laconic one-word answers, so the majority of their grade depended on only ninety words. The remaining ten percent derived from class participation. I divided the class into ten groups of fifty and told them that their participation grade for the semester would be shared equally among the members of their group. I established numerous rules for the awarding of merits and demerits to the groups: if all students of a group were present points would be awarded the group; if students were sitting out of place, not paying attention, sleeping, late, or on Facebook, the group lost points. Echoing the Spartan krypteia, I gave incentives to groups if they caught others breaking any class rules. As in the ancient phalanx, group discipline and unit morale was the key to success, with each student dependent on the abilities of their fellows.

As the semester went on, groups were given the ability to "exile" (with my approval) students they felt were not pulling their weight; any student so "exiled" failed class participation and was thus capped with a grade of A- at best. Groups were also allowed to "challenge" each other in a variety of different ways, where points were detracted from the losing group and given to the winner.  Such challenges included debates between champions, weekly writing assignments, and pop quizzes, where only the group average counted.  Competition within the class became quite fierce, and students were soon passing laws within their groups that required far higher levels of preparation, participation, and discipline. This resulted in a classroom with record attendance and focus and, at the end of the day, grades far higher than average. The typical C or B students saw their grades rise, largely due to student-created study sessions and online support within their groups.  Selflessness and team-centered dynamics, when well applied, brought about better results than any individual could achieve independently. Many students who became majors later looked back fondly on the class as a combination learning experience and reality game show.

There was an unfortunate dark side, though. When the law was supreme and everyone was subject to it—as even kings and oligarchs were in Sparta when the system was functional—tasks were divided evenly according to fairness, talent, and interest. But, if an individual with a strong and selfish personality took over, groups collapsed into chaos and disorder, experiencing lethargy at best, stasis at worst. Echoes of the Stanford Prison Experiment occurred too, as more powerful groups began to bully the weaker ones. Occasionally, the bullying seemed to me to exhibit disturbing patterns of racial and gender bias, but these were rarely acknowledged or addressed (and I was at a loss at how to step in without overturning my own structure).  Nevertheless, the majority of students ended up believing the class was fair, even while they acknowledged the potential for abuse and the likelihood of the system devolving into a sort of police-state. I was honestly surprised. I thought the class would experience a revelation in the end and universally reject Spartan ideology in favor of democracy, but that never happened. Still, I couldn't argue with results any more than people like Plato could argue with the fact that the Spartans won the Peloponnesian War. I had high grades, large enrollment, engaged students and was bringing in new majors. I wondered: could I develop a democratic Athenian counterpoint that would have the same appeal?  That was when the real trouble started.

Mike Lippman is an Assistant Professor of the Practice at the University of Nebraska, Lincoln. His work focuses on Ancient Drama, particularly Aristophanic Comedy. Other areas of study and teaching include: Classical Reception, Ancient Athletics, Petronius and Plato. His recent translation of Frogs (co-translated with Diane Arnson Svarlien) was just directed at Randolph College. He is currently working on a book about the modern application of ancient Greek thought. mlippman2@unl.edu