Review: Papyri.info: A Searchable Database of Papyri and Translations Online 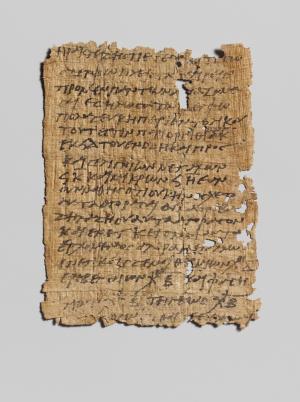 Papyri.info is a resource for the study of documentary papyri with two parts. The first, the Papyrological Navigator (PN), whose development began in 2006, aims to integrate and allow simultaneous querying of five existing papyrological databases. The focus thus far is on Greek and Latin texts, with selective inclusion of Coptic. A later development, the Papyrological Editor (PE), launched in 2010, offers the facility for users to contribute directly, in the form of corrections to entered data, new data entry, in particular new text editions, and even “born digital” editions of their own, all reviewed by an editorial board.

The core of the PN enables text searches and browsing on a conjunction of the Duke Database of Documentary Papyri (DDbDP) and the Heidelberger Gesamtverzeichnis der griechischen Papyrusurkunden Ägyptens (HGV), both long-established resources in their own right.[1] PN uses the unique text identifier numbers of the Trismegistos Project (TM) to establish correspondences between records pertaining to the same text across the two databases. The PN version presents texts in a form familiar from standard papyrological editions, with an articulated original text keyed, here by both line numbers and hyperlinks, to normalized forms in an apparatus. Searches, which allow Boolean concatenation of terms, run on both the main text and the apparatus. The text entries, whether reached from the results-list of a text search or by browsing, generally contain bibliographic and descriptive information on the object from the HGV and TM (simply presented side-by-side when, as often, both databases contain a relevant record), followed by the text itself, encoded in Unicode on the EpiDoc XML standard. For the TM information, fields such as “Provenance,” “Archive,” and “People” are directly hyperlinked to records in the database of that project for toponymy, papyrological archives, and prosopography, respectively. The TM records have the additional function of coordinating among multiple editions of the same papyrus text, which are condensed into the same record (e.g. http://papyri.info/ddbdp/sb;6;9415%2C20, which condenses SB VI 9415 [20] and P.Prag.Varcl. II 41). Each papyri.info entry furnishes a canonical URI, of the sort just given, which allows for citation and direct linking.

The coverage of published texts is reasonably complete for editions published in papyrological monographs, corpora, and series, but less so for those appearing in articles in periodicals after the most recent volume of the Sammelbuch (SB), which collects such texts and is comprehensively included here. As the last volume of the SB (XXVIII) concentrates on the publication years 2002–2004, that gap is now considerable. Efforts seem to have been made on a limited scale to catch up, in the case of the periodical ZPE, from which a handful of editions have been entered directly with identifiers such as “ZPE 174 168” (i.e. ZPE 174 [2010], pp. 167–168: http://papyri.info/ddbdp/zpe;174;168 ).

Papyri.info has also become the host of the Advanced Papyrological Information System (APIS). APIS was originally an independent aggregation of sub-databases organized at the level of collections holding papyri and similar. It is particularly useful for the provision of digital images and of preliminary catalogue information on unpublished texts. The images, where available, are now displayed directly alongside the text in the PN text records, as is the information on physical description, and sometimes translations, drawn from the APIS records. It must be noted that many HGV records displayed in PN continue to display links to APIS images from an earlier phase of the project, when it was hosted by Columbia University. These links no longer function.

Another of the databases indexed by the PN is the Bibliographie Papyrologique (BP). This thorough bibliographic collection, with French summaries and keywords and lemmata for texts mentioned, is searchable in a simplified form through the PN, complete through 2012, and also integrated into a “Citations” field in the relevant text records. The compilation of the “BP courante” continues independently (http://www.aere-egke.be/BP.htm ).

Papyri.info also hosts a Checklist of editions of papyri, ostraka, and related materials, heir to the venerable Duke Checklist of Editions of Greek, Latin, Demotic and Coptic Papyri, Ostraca and Tablets. The new version offers a canonical and reasonably up-to-date collection of abbreviations for such publications. The PN version does not yet include instrumenta or periodicals, for which recourse must be had to the older Duke version.

The second component, the Papyrological Editor (PE), was developed to facilitate the large-scale entry of new texts into the database. As part of this extension, the tool allows, and the project actively invites, contributions from all competent parties. The main task is the conversion from the printed pages of published editions to the EpiDoc XML necessary for proper display and querying in the database. This work has been greatly simplified, to require little to no expertise in XML, by the Leiden+ user interface, with substantial assistance in the form of a how-to guide and automatic syntax-checking, while quality is controlled by peer-review through an editorial board. The PE also offers scope for adding translations and commentary to the text records, where much remains to be done. Noteworthy too is the scope for “born digital” editions, subject to editorial review, in which the customary introductory discussions, commentary, and images can be integrated relatively easily into the textual records: see e.g. http://papyri.info/ddbdp/ddbdp;2015;3 .

Despite its ecumenical name, the PN generally excludes literary, paraliterary, and subliterary papyri, following the limits of the DDbDP and HGV. The excluded texts do appear to some extent via APIS records (i.e., inventory and bibliographic information, images) which can be browsed, and also appear in metadata searches. Literary papyri and the liminal cases are the purview of the more recent Digital Corpus of Literary Papyri (DCLP), which lies outside the scope of this review.[2] There is an announcement in the introductory matter of a planned expansion of papyri.info beyond Greek, Latin, and Coptic to include Arabic papyri, in collaboration with the existing Arabic Papyrology Database), but no mention for the present of the sparser, but not negligible, material in Hebrew, Aramaic, and Syriac.

The design of the site in general is admirable for its robust simplicity and clarity. Over some five years of use this reviewer has experienced very few difficulties in the way of errors and outages. The searching function itself, which many will find the most useful part of the resource, is well designed and explained in the accompanying documentation. As for the browsing function, the division between the DDbDP and HGV is comprehensible from the standpoint of database architecture, but some further introductory words to users on the distinct designs and principles of the two would have been helpful, as would a concordance between varying abbreviations used by the two (e.g. P.Vind.Tand. vs. P.Vindob. Tandem, the connection between which may escape non-specialist users).

The addressing of occasional infelicities in the data,[3] such as broken links in the presentation of HGV and TM records, or typos in the text entry for DDbDP texts, relies to a significant extent on the initiative of users, who may make corrections directly through the PE or suggest them to the competent parties. Regular maintenance has been taken up by the Duke Collaboratory for Classics Computing. Another important, outstanding task is the uptake of published proposals for corrected readings in published texts, for which the standard reference in the field remains the Berichtigungsliste der griechischen Papyrusurkunden aus Ägypten (BL), so far noted extensively in the introductory HGV entries but not systematically reflected in the texts themselves as drawn from the DDbDP. The PE also allows new proposals to be made directly to the editorial board.

All considered, the position of papyri.info as a standard resource among papyrologists is well justified. It offers a tool for editors in search of parallels, and for students of the Classical, Late Ancient, and Byzantine civilizations wanting readily accessible text presentations. The text database has already served large-scale data-mining, as for example the onomastic and prosopographic “People” component of the Trismegistos project. Scope for expansion in its utility for non-specialists, especially the provision of translations, is well provided for in the architecture of the tool, and needs only the concentrated effort of competent translators. The architects and collaborators deserve our thanks and congratulations for their efforts over its long gestation, as do the Andrew W. Mellon Foundation and the National Endowment for the Humanities for their generous support, which among other things allows the resource

[1] For the history of papyri.info and the organization of collaboration with other projects, see, in addition to the information on the landing page and “About” section, the remarks of J. Sosin, http://www.stoa.org/archives/1263.

[2] This reviewer cannot claim extensive experience with this Corpus but finds it to be very much a work in progress, noting more in the way of omissions (e.g., coverage of P.Oxy. is only through volume LXXIX when browsing under the entries via DCLP, and LXXX via DDbDP and HGV, while the publication has already reached LXXXII) and anomalies (e.g., found upon browsing the included APIS records, a record identified puzzlingly as “BASP 50 45,” which on inspection proves to be a re-edition of P.Tebt. II 348, a document concerning taxation, in a periodical, BASP 50 [2013] 45–47, which identifies no new features of the text that would justify its inclusion among literary, paraliterary, or subliterary papyri; sample text searches turn up not a few texts that appear simply to be documents: letters, petitions, legal records, and similar); many records contain only (meta)data and not yet the accompanying text.

Header Image: Papyrus in Greek regarding tax issues (3rdC BCE.) Currently in the Metropolitan Mueum of Art under a CC0.

PLACE: Institute for the Study of the Ancient World (NYU); Duke University

Michael Zellmann-Rohrer is a researcher on the Lexicon of Greek Personal Names at the Ioannou Centre for Classical & Byzantine Studies, University of Oxford. In addition to his work for LGPN on Greek and Semitic onomastics, he is in the process of revising for publication my PhD dissertation on Greek incantations and their tradition in classical and late antiquity, Byzantium, and beyond, and is preparing editions of some substantial unpublished ritual texts in Greek, Coptic, and Aramaic. His other research examines oral literature associated with incubation shrines in antiquity and Byzantium. Beginning in 2017. He will serve as co-editor of the Supplementum Epigraphicum Graecum for Egypt and the Near, Middle, and Far East.

04/13/2022
Blog: Two Years Later: “Classics” after Coronavirus?
In an April 2020 post for Eidolon, I gathered predictions on “classics after coronavirus.” Two years later, it’s...
04/08/2022
Blog: Ancient Worlds, Modern Communities: Increasing Accessibility for the Study of the Ancient World
The Ancient Worlds, Modern Communities initiative (AnWoMoCo), launched by the SCS in 2019 as the Classics...
03/21/2022
Blog: I Love You, I Hate You: A Student’s Perspective on Learning Latin
I have always enjoyed Latin class because it felt like a puzzle, much like math. Find the verb, find the noun that...
03/18/2022
Blog: Power to Punish and Authority to Forgive: Imperial State and Imprisonment in 4th-Century Antioch
Research ideas often develop out of chance encounters or unplanned circumstances. My dissertation project was born...
03/14/2022
Blog: Sampling Epic in Kendrick Lamar’s “Mortal Man”
Because it’s spirits, we ain’t even really rappin’ We just letting our dead homies tell stories for us....
END_OF_DOCUMENT_TOKEN_TO_BE_REPLACED