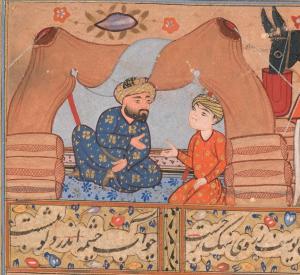 August 2012: a Latinist, a scholar of Chinese martial arts novels, a classical Persianist, a historian of early Vietnam, a Renaissance literature scholar, an archaeologist of pre-modern Malaya, and a post-colonial literature specialist assembled in New Haven. It was just like a gathering of Marvel’s AvengersTM, but with less spandex. We gathered not to save the world, but to read it: in their Olympian wisdom (to mix mythological universes), President Richard Levin of Yale University and President Tan Chorh Chuan of National University of Singapore had decided to establish Yale-NUS College, a jointly founded small liberal arts college located in Singapore. Their goal was to create a new model for higher education in a globalized future (or something Davos-y like that): our job was to design and eventually teach an interdisciplinary humanities first-year course called “Literature and Humanities,” one half of a yearlong Great Works sequence. (Its complement, “Philosophy and Political Thought,” runs independently with a separate teaching team composed of philosophers and political theorists. The Yale-NUS Common Curriculum is far more than these two courses: see the 2013 Curriculum Report for more on the guiding principles of the Common Curriculum).

Based on the Yale Directed Studies program that includes authors from Homer to Virginia Woolf, the original Literature and Humanities course was initially conceived by our new employers as an “East meets West” update of the prestigious original: a stable “Western” canon would find its complement in an “Eastern” canon of texts to provide a neatly symmetrical balance of cultures.

American classicists are likely familiar with the difficulty of constructing and teaching traditional canon-based core curricula, and can guess that it is impossible to contain even a simplistic West-East canon within a one year freshman syllabus. In a Borgesian exercise, our group of strangers was locked together in a room in New Haven and told to produce one. Fresh from leading three years of Classics-based Great Books at the University of Michigan, I was appointed “facilitator.” The group soon became locally notorious for its passionate intellectual disagreements. When treated as an abstract parlor game, choosing the “greatest works of global literature of ALL TIME” proved invidious and unproductive in our initial three week workshop. Later, when we started reading and discussing texts together, we considered the works as teaching texts in dialogue with each other, and soon realized that not all “greatest works” are useful (or necessary) to first year students. Using a backward design approach to target specific writing goals in our assignments helped us apply the same perspective to framing complex texts in a syllabus.

By targeting our audience of culturally diverse, high achieving, but inexperienced first-year students we were better able to determine pragmatic criteria for selecting works: accessibility to our unique demographic; teachability within our team’s broad areas of specialization; appropriate length (either as a whole or effectively excerptable); free-standing-ness, that is, requiring minimal background knowledge (unlike, say, the Aeneid, Thucydides, or Dante); ability to be read in different ways (including visually: many ancient works, inherently pre-disciplinary, have long afterlives in a variety of artistic media); and most importantly, richness in opportunities for comparison.

Reading texts that I had taught many times like the Odyssey and Herodotus’ Histories with works like the Sanskrit Ramayana created stimulating new frames of interpretation. Jami’s Yusuf and Zulaikha, a 15th century philosophical verse romance in classical Persian based on Sura 12 of the Qur’an, tells the Biblical story of Joseph and Potiphar’s wife. Accessibility it has: this work became a smash hit among our students, who enjoyed its combination of spicy eroticism and Sufi theology. Comparative themes suggested themselves readily to my classicist self: neo-Platonic ideas and Greek novel tropes in it were clear. In this way themes emerged organically from our reading group, and multiple possible configurations and relations between works presented themselves across texts. We began to speak of a “bench” of possible backup texts for future substitution that would generate new alignments and themes. This "modularity" is especially important as our teaching team changes over time. Despite Jami’s popularity, after the departure of our Persianist we turned to our new colleagues for an appropriate replacement, and worked in Genesis, Job, then 1001 Nights, with excellent results.

A conviction developed early that European periodization (Classical-Medieval-Renaissance-Modern) should not dictate the progress of the year. Instead we conceived of the transition between the semesters as “the rise of the vernaculars.” Vernacularization occurs globally, but at different times, and thus avoids imposing European categories. We used Quixote as a bridge text between semesters, leading to the Ming novel, Journey to the West. In our first year, we ended with the Ozu film, “Tokyo Story,” which beautifully explores generational and cultural conflicts in post-WWII Japan.

Hiring for the Common Curriculum initially brought together a lot of “ancient” people: ancient Greek philosophers, Sanskrit philosophers, Tibetan Buddhist philosophers (there are a lot of philosophers), Latinists, archaeologists, Chinese paleographers, and we have recently started hiring postdoctoral teaching fellows, including a recent PhD in ancient Mediterranean and Near Eastern history. In 2014, we formed the Ancient Worlds Research Cluster, an interdisciplinary, transregional group that hosts an international lecture series on global antiquity.

What about ancient languages? Though we had not initially planned to, we started teaching Latin and Greek after the first semester. This became the nucleus of a serious ancient languages program. Students asked professors for additional instruction in Sanskrit, which is now a regular offering, and numbers in Classical Chinese are strong, as many of our Singaporean students have Mandarin instruction in secondary school. These ancient languages have become essential to majors in Philosophy, History, and Literature, and our first seniors have already written capstone projects using their linguistic skills. As languages were not initially part of the curriculum, we recently developed the Global Antiquity independent minor to help our advanced language students apply their language credits to a certification that reflects their specialized academic interests to graduate schools and employers.

Though numbers in our advanced courses may still be small, it’s exciting to see these programs developing. Ancient Worlds and Global Antiquity are growing, and providing an important intellectual home for our colleagues and students. We are conducting undergraduate student exchanges, including sending four students to the Yale Humanities summer program in Rome, and I’m delighted to see that Classics can be a bridge for our students to so many worlds, including to universities in the US and the UK. As Classicists know, globalization is nothing new. I’m happy to have the opportunity to spread this message at a new liberal arts college in South East Asia.

[Header image: Detail from "Yusuf is Drawn Up from the Well." Folio from a Yusuf and Zulaikha of Maulana Nur al-Din `Abd al-Rahman Jami. Second half of the 16th century CE, artist unknown. Metropolitan Museum of Art 57.51.39.137. Public Domain, licensed under CC0 1.0.]

Mira Seo joined Yale-NUS College as an inaugural faculty member in 2012. Previously, she was in the Departments of Classical Studies and Comparative Literature at University of Michigan from 2005-2011, and promoted to associate professor in 2011. She can be reached at mira.seo@yale-nus.edu.sg.