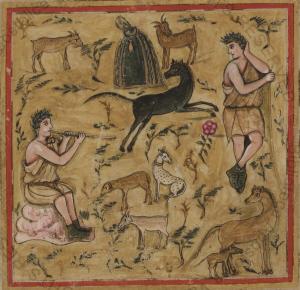 While in graduate school at the University of Michigan in the late 1990s, I took a great class on Vergil’s Eclogues with David O. Ross, Jr., an expert on Augustan-era verse, and much later I started to memorize these poems for my own amusement because of their brevity and wit. I certainly never intended to perform the poems in a formal context, although I had learned in his class that Vergil first made a name for himself when his Eclogues were performed on stage in Rome. In the spring of 2017, however, I was presented with just this kind of opportunity. Every April, Keith Country Day School celebrates a Spring Arts Week culminating in three days of performances of songs, poems, dramatic vignettes, vel sim. by both faculty and students. And so, I volunteered to perform Eclogue 2, Corydon’s monologue about his unrequited love for Alexis, in Latin on stage, for I thought its broad comedic character would be entertaining. The head of the theater department, Erin Philpott, not only received my idea warmly but met with me several times to go over the “script”, brainstorm gestures and staging, fit me out in a shepherd’s costume, complete with a crook, and provide all manner of technical advice. In order to keep the audience engaged during the show, I arranged for a simultaneous PowerPoint slide presentation that displayed the successive sections of the Latin text with an English translation. The novelty of the performance (both that I delivered it in Latin and that I did so from memory) and the humor of Corydon’s ever-shifting attitude towards the poem’s absent addressee charmed the audience.

I was very satisfied with the result, but I wanted to include more student participation in the next performance, so it would be less a vanity project on my part and more a pedagogical exercise in living Latin for my students. So this past spring I decided to try Eclogue 6, where the shepherd Tityrus narrates an epic song that a hungover Silenus is forced to sing for his freedom. I thought that the short passages spoken by some of the characters – Apollo, Silenus, Linus, Pasiphaë, and the sailors searching for Hylas – would be fitting for my lower-level Latin students. I went over with each actor individually the Latin verses they were responsible for, helping them understand the import of the words, find the rhythm of the hexameters, and think about expression. The theatrical director again provided invaluable advice and costumes for my students and me and helped me envision the “scenes” of the poem on stage. I took center stage for the preface as the poet/narrator and had my ear duly pulled by an admonishing Apollo clad in a pure white toga. Then I yielded the stage to a sleeping Silenus entering stage right and getting tied up with plastic laurel wreaths by the boys Chromis and Mnasyllos (clad in simple tunics) under the eyes of the mischievous nymph Aegle (wearing a more colorful palla).

After Silenus uttered his simple response to the situation, the actors withdrew, and I resumed my position in the center stage to recreate through words and gestures Silenus’ song itself, which ranges from the origins of the universe, the world, and mankind to several famous myths; here I could have added slides showing the Big Bang and the like to accompany Vergil’s spare but evocative verse, but I thought that the slides showing the Latin text and translation were pushing the visual limits of the audience’s attention. I again yielded center stage, in succession, to Pasiphaë (in royal raiment) wandering through the pastures of Crete in search of the Bull of Minos; to a visibly distraught Gallus, the Roman poet, lost in the Aonian mountains; and to a resplendent Linus decked out in flowers who grants him the pipes once given to Hesiod by the Muses. The show ended as the poem itself ends with the arrival of Vesper, i.e., the house lights fading to black. The audience enjoyed this show as well, and I think more so because it involved more than one actor and more dynamic subject matter than the previous.

The students, many of whom regularly take part in theatrical performances at my school, found it thrilling to combine their interest in theater with Latin poetry. Their response has encouraged me to continue experimenting with the staging of the Eclogues, and in turn I encourage high school Latin instructors to try them out as an aid to help students (and faculty) think of ancient poetry in a more performative context. Students need more opportunities to experience Latin as a living language, and public demonstrations like these raise awareness of Latin as more than just the “senile mother” of French and Spanish. The Latin of the Eclogues is none too difficult for intermediate and upper level students, their content is very engaging, and their brevity will easily permit the performance of one in a single class period (the longest takes 10 minutes at most) or on stage as part of a larger variety show.