Review: A Mid-Republican House at Gabii 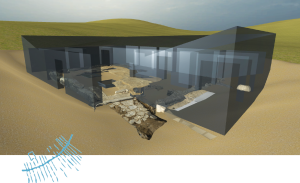 A Mid-Republican House at Gabii is an ambitious project. It extends the born-digital movement in archaeology, in that the final publication of an excavation is a website with an ISBN and long-term hosting by the University of Michigan. In addition to a traditional presentation of the finds, the publication includes the full excavation database disseminated through the Archaeological Recording Kit (ARK). The resource also presents the architectural remains and contexts in an interactive 3-D environment, coded using the gaming platform Unity. The latter two components of this forward-looking publication especially merit review as a digital project. Does the Gabii publication represent a competitive alternative to the traditional format of the excavation monograph?

The Tincu house—named after a donor who provided funding and volunteered during the excavations—was built ca. 280–260 BCE within a plot left open for more than a century following the establishment of Gabii’s street network around 400 BCE. Domestic activity continued until roughly 100 BCE, after which the structure was substantially reconfigured, apparently to serve as an annex for a public building nearby. By the middle of the 1st century CE the annex was abandoned.

An introduction of approximately 13,000 words summarizes past explorations and new findings from the area, while sketching out the project’s theoretical frameworks. This is freely available. The main content consists of a brief summary of the major finds, followed by a section titled “More” that provides a phase-by-subphase analysis of the house.  The final section of the main content, titled “Details,” describes the individual archaeological contexts, followed by specialists’ reports on the building materials, archaeobotanical and zooarchaeological analyses, ceramics, special finds (incomplete), and coins.

The introduction is a pleasure to read. In the main contents, however, the finely crafted text is not always well served by the digital format. This content is presented as a single webpage, comprising text and embedded figures equivalent to roughly 150 printed pages. The reader is easily lost scrolling in this huge document. To assist navigation, hypertext cross-references scroll to various anchors on the page, but using these loses the previous position. Readers may, alternatively, navigate the website via a list of section headings provided under “Full Contents.” Because page numbers are omitted, it will be difficult to cite the text with much precision. These navigational and formatting limitations will deter some readers, especially those more comfortable digesting text on the printed page than on a computer monitor.

Figures are sporadic, and none have been hyperlinked from the text. The main text has just seven figures, compared to 103 images, charts, and tables embedded in the specialist reports. The lack of illustrations in the main text is surprising in a digital publication, as the editors would seemingly have fewer limitations for color illustration than in a printed book. Instead, the 3-D viewer is intended to supply most of the necessary visual resources.

Figure 1: A Screenshot of the standard window for the Gabii publication, with the Unity 3-D
viewer open (Safari 10.1, maximized on the screen of a MacBook Pro / 15” Retina display).

The advantages of the 3-D viewer as an immersive environment, inviting free exploration, have been extolled in a recent article in Open Archaeology. After the interface loads, visitors find themselves located in a highly abstracted and restricted 3-D realm. Pared-down navigational tools allow some movement, but exploration can be difficult. One option (active in Figure 1) is to move about the site viewed from standing height. The other viewing mode is an aerial perspective that allows one to zoom and rotate around one spot in the model, but not to move the center of interest. One becomes accustomed to navigating the house by flipping back and forth between the two modes.

Figure 2: Screenshot of an unlabeled wall. The red dashed line has been added where the wall
elevations have been omitted, and many other lacunae can be observed throughout this view.

Missing and incomplete data is a problem throughout the viewer. The many data gaps reveal a distracting textured plane, set at an arbitrary low level below the excavated remains, which makes the house appear to float unnaturally. The 3-D environment is cropped to the immediate area of the house, divorcing it from the much more extensive excavated area and leaving unillustrated features outside the house that are frequently referenced in the text. For example, “Road 4,” which runs along the west side of the house, is not labeled or illustrated in the viewer or figures.

Figure 3: One of the Stratigraphic Unit (SU) information panels is open in the 3-D viewer.
The 1-m site grid is active, repeating the same text, “1m,” in the corner of every square.

Features in the 3-D environment are labeled with floating trowel icons that, if clicked, bring up a title, categorical icons, Stratigraphic Unit number, and links to the ARK database. However, the polygons representing contexts, walls, and other features are more often than not missing their trowel, giving the user no obvious way to identify them. For example, Figure 1 shows a single trowel, although a dozen different features are visible. Despite numerous references to them in the text, Rooms B1 through B6 are unlabeled. The only way to reconstruct these rooms is to find the walls surrounding them—listed only under “Details”—and zoom on them in sequence using the 3D viewer. Figure 2 reveals a related problem, in that cluttering makes unclear which trowel, if any, belongs to the entity one wishes to identify.

A surprising deficiency for an archaeological report is the lack of spatial referencing. The viewer allows one to activate a grid which, as seen in Figure 3, provides a sense of scale, but there is no indication of whether this is the site grid or some other coordinate system. The grid is not oriented to the cardinal points, and in fact there is no “north” arrow anywhere. Archaeologists have become accustomed to 2-D plans, elevations, and sections as analytical tools that can simplify and make sense of the often bewildering complexity present in an excavation. The 3-D viewer provides no comparable tools for visualization, and the entire publication lacks even one properly scaled plan, elevation, or section marking grid coordinates. Such basic topographical conventions developed in archaeology over the past 150 years should not be discarded. Because of these sorts of omissions, the otherwise lucid writing becomes difficult to understand when describing stratigraphy and architecture.

Perhaps the most serious problem with the website is its lack of accessibility. Although non-paying readers may preview the introduction and browse the database, the primary texts and 3-D viewer are behind a paywall. More than nine months after publication, WorldCat lists just four libraries outside Michigan offering their members access to the site—a finding confirmed by searching 25 major research libraries. In the “traditional” model, a library purchases a physically printed book for a one-time fee and then allows its visitors to inspect the contents freely. Interlibrary loan provides members delayed access to works missing from a local library, yet loaning is impossible within the digital access model for the Gabii publication. The present lack of institutional subscriptions means that the vast majority of scholars cannot view the primary content without paying the $150 individual fee.

The University of Michigan servers present yet another obstacle. With transfer speeds capped at 190 kbps, full-resolution images and 3-D PDFs of many contexts can require several minutes to download. The bandwidth limitations most negatively affect the 3-D viewer, which by default occupies more than half of the screen (Figure 1). In a variety of tests (on Macs and PCs, residential broadband and university Ethernet connections, in the US and abroad), I waited 14–16 minutes for its ca. 160 MB of data to load before anything was displayed. Moreover, the 3D data is not cached, so if one clicks on a figure to magnify it or uses the “Full Contents” to navigate the long webpage (both replacing the contents of the window), another 15-minute load is required to return to the main text. While the paywall and bandwidth problems might be fixed simply by removing these restrictions, the inadequacy of the interactive website as a spatially communicative or analytical tool will be more difficult to address.

The project should be commended for its early trials with photogrammetric recording in 2009–2012 and the speed with which the final report was published, but there is no recording of any kind presented for over half the excavated areas. It is concerning that a final site report would omit intelligible illustration of so many fundamental spatial components, especially those referenced hundreds of times in the text. As it stands, future archaeologists will struggle to understand the configuration of the Tincu house and, as a result, find it difficult to challenge the stratigraphic or architectural interpretations proposed in the text. It is unfortunate that so much conscientious research by the contributors, represented especially in the crafting of the introductory text and the specialist reports, are not better served by the digital format.

(Header Image: Detail, screenshot of the landing page for A Mid-Republican House at Gabii.)

Philip Sapirstein is Assistant Professor of Art History at the University Nebraska-Lincoln. He specializes in ancient architecture and ceramics. A major focus of his research is the emergence of monumental architecture at Greek sanctuaries and settlements in the mainland, Italy, and Turkey. Recent field projects include a reassessment of the Temple of Hera at Olympia and the Digital Archaic Heraion Project. He can be reached at psapirstein2@unl.edu.