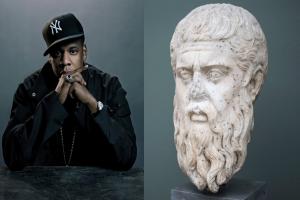 This would not be Jay-Z’s last reference to the relationship between Socrates and Plato. As Professor Dan-El Padilla Peralta discusses in great detail, Jay-Z references the “Euthyphro Dilemma” (in “No Church in the Wild,” the haunting opening track of his 2011 collaborative album with Kanye West, Watch the Throne. Plato’s Euthyphro is a fictional dialogue between Socrates and the seer Euthyphro, in which the two discuss the meaning of “piety” (Greek, τὸ ὅσιον). The so-called “Euthyphro Dilemma” Plato, Euthyphro 10a) occurs when Socrates posits a problem with Euthyphro’s third definition of piety: that which all the gods love. Socrates asks whether something is pious because the gods love it, or if the gods love something because it is pious. Jay-Z alludes to this same problem in a verse problematizing the relationship between violence and organized religion:

I’m wondering if a thug’s prayers reach
Is Pious pious cause God loves pious?
Socrates asked whose bias do y'all seek?
All for Plato, screech…

Professor Padilla Peralta notes that “the lines are crammed with references.” [1] Jay-Z’s mission to carry on Notorious B.I.G.’s legacy, a theme in Jay-Z’s oeuvre that predates the Princeton seminar, adds meaning beyond the Euthyphro references. Compare, for example, a line from the third verse of “Moment of Clarity,” the eighth track off his 2003 The Black Album: “I’m strong enough to carry Biggie Smalls on my back.” This double entendre of “carrying” Biggie physically and figuratively “carrying” his legacy is like the closing line of Book 8 of Vergil’s Aeneid: Aeneas, after receiving a shield from his mother, the goddess Venus, engraved with the achievements of the Roman people he is to found (legacies of the past for the reader and the future for Aeneas himself), “lifts the fame and fates of his descendants upon his shoulder” (attollens umero famamque et fata nepotum, Aen. 8.731). [2]

Jay-Z doesn’t just use ancient relationships to underscore legacy, he also uses them to define himself as an individual. Classical references are a means to establish his own place in the rap world (and pop culture more generally) in The Black Album. [3] He foretold this album in the final verse of Kanye West’s “Never Let Me Down” (College Dropout) by calling it “eighth wonder,” simultaneously noting it would be his eighth album and comparing his entire discography to the so-called “Seven Wonders of the Ancient World.” The Black Album’s third track, “What More Can I Say,” opens with an audio sample from a scene from Ridley Scott’s 2000 film Gladiator, in which Russell Crowe’s Maximus, an enslaved gladiator who has just slaughtered several of his fellow gladiators, hurls his sword at his host and proclaims to a silent audience, “Are you not entertained? Are you not entertained? Is this not why you are here?” Jay-Z uses this scene to focalize his own place among his fans and critics. Like Maximus, who senses disappointment from his still hungry spectators—even after he has killed everyone there was to kill—Jay-Z, after eight albums, has nothing left to say. “What more can I say to you,” he asks rhetorically after the first chorus. “You heard it all.”

On the next track, “Encore,” Jay-Z once again uses the ancient world as a way of establishing his place, this time with far more agency than a gladiator in the arena:

And I need you to remember one thing
I came, I saw, I conquered
From record sales to sold-out concerts

By echoing the most common translation Caesar’s famous saying, veni, vidi, vici (“I came, I saw, I conquered”) regarding the Battle of Zela and his  handy defeat of Pharnaces in 47 BCE, Jay-Z compares his own conquest of the music industry to the military conquests of Gaius Julius Caesar.

Jay-Z’s use of these three words also characterize two classical literary devices Jay-Z commonly employs, tricolon, the listing of three parallel words or phrases, often with increasing effect (tricolon crescens, or ‘rising tricolon’); and asyndeton, the intentional absence of conjunctions to give a rapid-fire effect. Take, for example, his first verse on “In Paris,” the third track from Watch the Throne:

Jay-Z quickly compares himself to three successive Michaels, each arguably the greatest of his domain (pop music, boxing, and basketball, respectively). The addition of “Game 6” to the third item on the list, [Michael] Jordan, not only alludes to the famous series-winning shot of Game 6 of the 1998 NBA Finals (and the final shot of his Chicago Bulls career), but it also marks the pinnacle of a series of apparently increasing names by making the third seem greatest by being syllabically the longest. We can compare the opening line of Marc Antony’s famous speech in Act 3, Scene 2 of Shakespeare’s Julius Caesar: “Friends, Romans, Countrymen, lend me your ears.” [4] Each of the opening three words seems to outdo the last because each increases by one syllable.

We also see major poetic themes familiar from antiquity evident in the lyrical content of Jay-Z’s music. He is one of the many rappers who participates in aemulatio (literally, ‘rivalry,’ but also ‘emulation’) with others. His “beef” with fellow New York-based rapper Nas has been well documented, but he has had smaller, even playful aemulationes with other rappers worth noting for their intertextualities. Returning to The Black Album’s “Moment of Clarity,” for example, Jay-Z defends the apparent shallowness of his music by comparing his commercial success to that of more socially conscious rappers Common and Talib Kweli:

If skills sold, truth be told,
I'd probably be, lyrically, Talib Kweli
Truthfully I wanna rhyme like Common Sense
But I did 5 mill' – I ain't been rhyming like Common since

If lyrics sold, then truth be told
I'd probably be just as rich and famous as Jay-Z
Truthfully I wanna rhyme like common sense
Next best thing I do a record with Common Sense

Such intentional allusion can be seen throughout classical literature. To use another Vergilian example, Vergil, in Book 2 of his Georgics, proclaims, “Happy is he who can understand the causes of things” (felix, qui potuit rerum cognoscere causas, Verg. G. 2.490), a probable allusion to the Epicurean philosopher Lucretius’ poem De Rerum Natura, “On the Nature of Things.”

A value on the oral tradition and the immortalization of one through storytelling are constant themes in Jay-Z’s music, especially in his 2009 song “Young Forever.” In the second verse, Jay-Z reminisces on the legend he will become:

Fear not die, I'll be alive for a million years, bye byes
Are not for legends, I'm forever young, my name shall survive
Through the darkest blocks, over kitchen stoves, over Pyrex pots
My name shall be passed down to generations
While debating up in barbershops
Young slung, hung here, showed that a [expletive] from here
With a little ambition, just what we can become here
And as the father pass the story down to his son's ears
Young'll get younger every year

Jay-Z imagines that his name will pass on generation to generation in such a way that he will not truly die. This idea is prevalent as early as Homer’s Iliad, in which the Greek hero Achilles recalls the prophecy from his goddess mother Thetis that he will never return, “but [his] glory will be eternal” (ἀτὰρ κλέος ἄφθιτον ἔσται, Il. 9.413) if he stays and dies at Troy (a scene portrayed in the 2004 film Troy).

Homer himself is a shadowy figure in history. The legends of Homer’s birth, life, and authorship changed and developed in the centuries that followed the composition of the Homeric epics,[5] just as Jay-Z imagines the stories of his own life and legacy will change and develop from barber shop to barber shop, generation to generation, becoming greater in each succeeding age. [6] When Jay-Z said he was playing Plato to Biggie’s Socrates, Cornel West praised him for his “sense of history” and his emphasis on context. From the ancient world to the Louvre, Jay-Z, along with Beyoncé, have not only cited the historical record, but created their own space within it.

[1] I’ve omitted references to the Colosseum and Christ-imagery elsewhere in this verse.

[2] All translations from Greek and Latin are my own.

[3] At the time, Jay-Z intended The Black Album to be his final album.

[6] Like I always tell my students, Jay-Z is the Homer of the 21st century.

07/01/2022
Blog: Ancient Worlds, Modern Communities: Contemporary Responses to Greek Myth and Tragedy through Drama, Film, and Visual Art
The Ancient Worlds, Modern Communities initiative (AnWoMoCo), launched by the SCS in 2019 as the Classics...
06/29/2022
Blog: “Deeply rooted in history”: Teaching abortion ancient and modern in a post-Roe v. Wade world
With weary hearts, we consider with you what Classics can do in the face of Dobbs v. Jackson Women’s Health...
06/27/2022
Blog: Teaching in a Time of Anti-Asian Violence: Reflections on Asian & Asian American Experiences in Classical Studies, Part 1
This two-part series reflects upon AAPI experiences in Classical Studies. Part 1 is catalyzed by the author’s...
06/25/2022
Blog: Roe v. Wade, the GOP, and echoes of Augustus: Reproducing fascism
I guess I should say “thank you.” Gratias vobis ago. Thank you to the Republican Party’s long game, a partisan...
06/20/2022
Blog: Paternalism and the “Good Slave” in the Speech for Phormion and the Legacies of Slavery
In a discussion of the concept of the “good slave” in her book Reconstructing the Slave: The Image of the Slave in...
END_OF_DOCUMENT_TOKEN_TO_BE_REPLACED