Blog: Addressing the Divide Between Biblical Studies and Classics 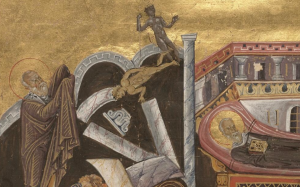 'Addressing the Divide' is a new series of columns that looks at the ways in which the modern field of Classics was constructed and then explores ways to identify, modify, or simply abolish the lines between fields in order to embrace broader ideas of what Classics was, is, and could be. This month, Sarah Bond discusses the partition between Biblical Studies and the field of Classics.

In November, I ambled through the labyrinth of rooms set aside for the annual conference for the Society of Biblical Literature and the American Academy of Religion (SBL/AAR), marveling at the thousands of attendees there to discuss everything from the Roman catacombs to sexuality in South Asian Buddhism. I had arrived in Denver in part to sit on a diverse panel reviewing a new book on the history of slavery and early Christianity, Katherine Shaner’s Enslaved Leadership in Early Christianity. Although Prof. Shaner is Assistant Professor of New Testament at Wake Forest’s Divinity School, her work is extremely germane to classicists who study Greco-Roman slave systems. Her examination of the leadership of enslaved individuals at Roman Ephesus during the high empire of the first and second centuries CE is right at home with anyone reading the work of Walter Scheidel or Sandra Joshel. Despite its pertinent subject matter, I had heard little about the book among classicists that study the topic, whereas it seemed as though it was widely known among friends who study patristics and biblical studies. 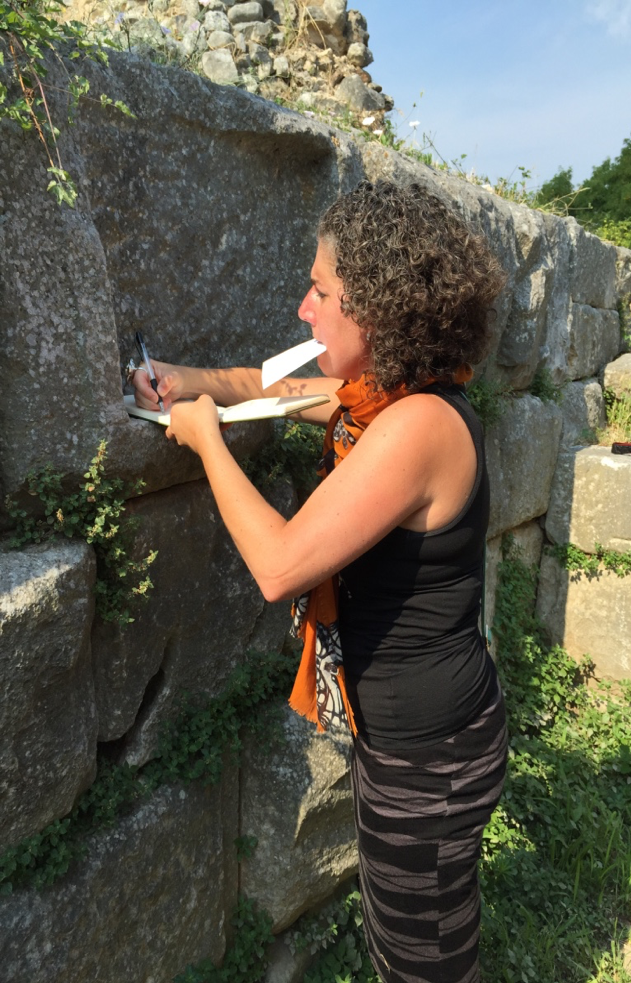 I thought a lot about the work of Shaner and her advisor, Laura Nasrallah (seen here translating an inscription in situ at Philippi) in blending classical archaeology, epigraphy, and biblical literature as I attended various panels and lectures on topics from all over the ancient Mediterranean. Years prior, I had the chance to see Prof. Nasrallah in action at a conference at Roman Philippi that brought together classicists, archaeologists, and biblical historians to look at the ancient site; one I was invited to by two biblical archaeologists. It is also a conference wherein I was supremely schooled on how not to use the Acts of the Apostles.

While at SBL/AAR, only rarely did I run into fellow classicists I had also seen at the SCS-AIA annual meetings. And yet I felt like each of the papers I was attending would have easily been at home at our annual meeting as well. When I asked these panelists whether they identified as a classicist, most flatly replied in the negative. Many also noted that throughout their professional lives (usually as they attended divinity schools, attained PhDs in religious studies, and most often when they applied for jobs within the field of Classics), they were often marginalized by classicists who doubted their language skills, inquired as to their ability to teach non-biblical texts, and scoffed at the role of biblical literature as a part of ancient history.

The superiority complex affected by many classicists is a frequent conversation topic at SBL-AAR, as well as conferences like the North American Patristics Society (NAPS). It is one reason why there remains such a noticeable separation between those who do religious studies or theology and classical philologists in particular. Classicists often use knowledge of Latin and ancient Greek as an exclusionary litmus test for whether a person is authentically a classicist. To many, if you don’t have both, you simply can’t use the title. But is this the only way to be a classicist? Furthermore, how is this perception hurting the field?

In an effort to address the reasons for this false divide and explore ways of mending it, I spoke with a few scholars of religion. Nyasha Junior is an Associate Professor in the Department of Religion at Temple University and author of the forthcoming Reimagining Hagar: Blackness and Bible. As she noted, she did an extensive amount of language work when she was trained as a scholar of Hebrew Bible at Princeton Theological Seminary: “I took Hebrew and Greek in my MDiv program. They were not required for my MDiv although language study was somewhat encouraged.” Additionally, she is an active translator of Greek and Hebrew.

My preferred translations are my own. As a church girl, I memorized Bible verses. So, the KJV still has a special place in my heart. There are often lots of translation biases that uphold stereotypes about women.

When I asked her about her attitude towards classics and why the field is so lacking in diversity, Prof. Junior noted:

Other theologians and religious studies scholars I spoke to echoed Prof. Junior’s comments on the rigor of language training and translation in many departments focused on religion. Jeanne-Nicole Mellon Saint-Laurent, an Assistant Professor of Theology and specialist in Syriac saints, detailed just some of the languages translated in the Theology Department at Marquette University:

In our department, everyone in biblical studies as well as ancient/late ancient historical theology is proficient in Greek, and we all have training in other linguistic traditions as well (Latin, Ethiopic, Syriac, Ancient Hebrew, Aramaic, Armenian, Coptic, Arabic).  It is such proficiency that preserves the integrity of the scholarship in our field.  In our dept., for instance, Michael Cover (New Testament), Josh Burns (Ancient Judaism), and I were classics majors in college, and it was that background that got many of us interested in the field of biblical studies/early Christianity in the first place.

Despite a shared love of the ancient Mediterranean and its myriad peoples, cultures, and languages, many biblical studies scholars still see firm boundaries between the two fields. Steve Friesen, Department Chair of Religious Studies and Louise Farmer Boyer Chair in Biblical Studies at the University of Texas at Austin noted to me his perception of the divide. I should note that Prof. Friesen and archaeologist Dan Schowalter were the ones who first invited me to see Roman Philippi in a new light.

I don't think Biblical scholars are classicists.  Scholars in these two categories sometimes deal with the same culture region and time period, sometimes even the same texts and artifacts.  But the disciplinary formation and the intellectual agendas are quite different.  I was located in a Classics department for a couple years while the Religious Studies department was being built.  I could work there and offer classes that supplemented the curriculum, but the central concern in my field (religious phenomena) was secondary or marginal for most of my colleagues and not central to the curriculum.  I'm not suggesting that one is better than the other, only that they are different.

There is another important difference in terms of the contemporary ideological locations of the disciplines in relation to Christianity.  Classics has a history of excluding early Christianity from its field of study.  Some classicists--not all classicists by any means--occasionally give the impression that they are champions of the Classical world, defending it against the hegemony of Christianity.  It can sometimes turn into a righteous cause, promoting the diversity of "inclusive" paganism against the attacks of "exclusivist" Christianity.

As many classical studies departments continue to shrink and are increasingly threatened by faculty attrition, limited funding, and low undergraduate student enrollment, we must again think about how we define the field of Classics and whether these disciplinary walls are doing more harm than good. We must also consider whether efforts to diversify the field are stymied by our pretensions and by 19th century definitions for what Classics is or is not. Some departments, like my own at the University of Iowa, have welcomed split appointments between religious studies and classics that have successfully intermixed religious studies with the classical canon. Yet far too many reject the inclusion of Judaism, Islam, and early Christianity (its texts and its scholars) as part of the core classics curriculum for undergraduate and graduate students.

But I do not think all hope is lost. We can be the change we wish to see, to paraphrase Gandhi. Offering to do cross-departmental colloquia or on-site conferences focused on religion, or simply offering our speaking services to local synagogues, churches, and mosques is one place to start. Letting go of the self-importance as self-appointed gatekeepers of the classical world at conferences and when speaking to fellow scholars is an even easier fix. “Throw open the doors of the discipline,” suggests Prof. Junior. “Instead of appearing to be an exclusive country club, welcome others in and share the work you do and why it matters.”

Header Image: Depiction of Cornelius the Centurion, a gentile who converted to Christianity as related in the Acts of the Apostles. When forced to sacrifice to idols, he caused an earthquake that brought down the Roman temple and its statues (Menologion of Basil II, 11th c. CE, in Vat.gr.1613 of the Vatican Library, Wikimedia).

01/24/2022
Blog: RU an Antígone?
RU an Antígone?, a play based on Sara Uribe’s Antígona González, was performed by Rockford University students on...
01/21/2022
Blog: News from Vermont: The Ambrose Graduate Fellowship in Classical Languages
Happy news and an update on affairs at UVM. A generous gift from Emeritus Professor Z. Philip Ambrose will let...
01/18/2022
Blog: Asterion: Making Neurodiversity Visible in Classics
As an autistic classicist, one of the things I’ve always struggled with is social interaction. In class, I teach...
01/09/2022
Blog: Inclusive and Culturally Responsive Teaching in Classics
Like many educators, I have found myself in an endless loop lately of thinking and rethinking my teaching...
01/07/2022
Blog: A Digital Ethnography of a Conference in a Crisis
To write about the Capitol Insurrection, as the one-year anniversary approached, I went back through my chat logs...
END_OF_DOCUMENT_TOKEN_TO_BE_REPLACED