Blog: Ale Caesar! Classical Reception and the Art of the Beer Label 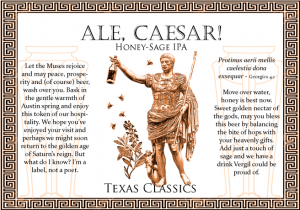 Classical reception comes in many forms—including beer. Just ask Colin MacCormack, a Classics graduate student at the University of Texas-Austin. For the past few years, he has been brewing his own beer with classically inspired names and labels that he makes himself. He often serves these brews at annual lectures or at department functions.

I can attest firsthand to the fact that MacCormack’s beer is delicious, but what stuck with me longer than either his hoppy Rye Pale Ale or his Ale Caesar! Honey-Sage IPA was the time he put into his beer labels. It got me thinking not only about the way that the ancient world is reshaped in popular culture, but what role Classicists can and should have in shaping that reformulation. 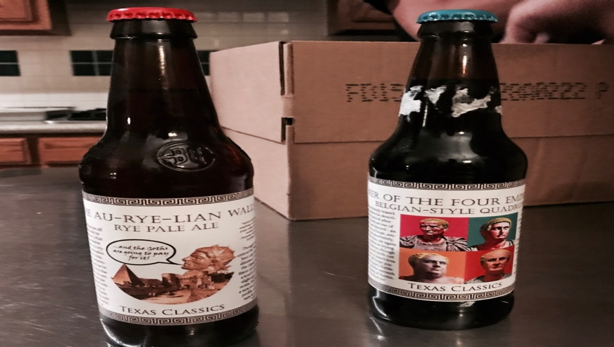 Figure 1: At the Classics Department at UT-Austin's annual William J. Battle Lecture, graduate student Colin MacCormack brews and labels beer for the annual lecturer. In 2017, there was a rye pale ale and a Belgian style quadrupel (Image taken by Sarah E. Bond right before she drank both of these beers).

In antiquity, Greco-Roman elite tended to uphold wine as civilized and to denounce beer as the drink of the uncivilized other; the “barbarian beverage.” Pliny and Tacitus reinforced this apparent cultural dichotomy in antiquity, as did many other Roman writers. For their part, Gallic tribes may have viewed wine negatively. In the Bellum Gallicum, Caesar noted: “They absolutely forbid the importation of wine, because they think that it makes men soft and incapable of enduring hard toil.” Roman literati wrote of the privilege of wine with the same arrogance that many oenophiles do today. And thus what beverage you drank could gesture towards your ethnicity and your social status. 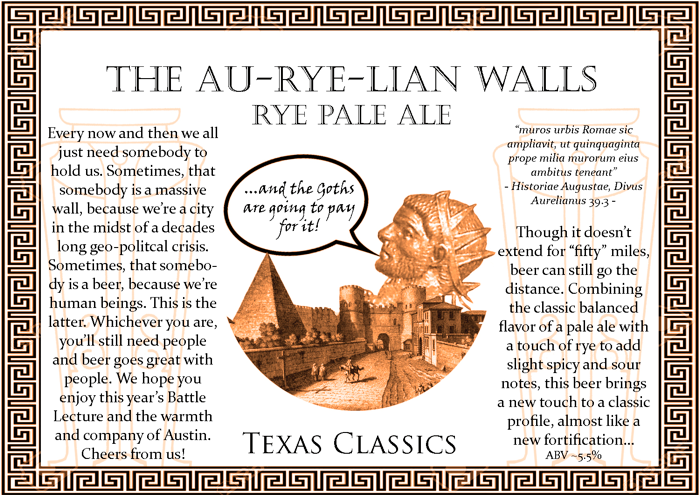 Figure 2: MacCormack's label for the "Au-Rye-Lian Walls" rye pale ale, which not only quotes the Historia Augusta, it uses the numismatic iconography of the Roman emperor Aurelian himself (Image and label by Colin MacCormack).

It is notable that pretensions surrounding how food and drink function to indicate prestige can and do change over time. In the United States during most of the 20th century, beer was the drink of the blue-collar worker. Budweiser, Miller Lite, and Coors were the drinks of the masses and of the undergraduate frat boy. Fine wine was the drink of the white-collar intellectual. Yet with the rise of craft brewing in the early 2000s, the status gradations within the beer world have been reordered and tied to the size of the brewery. Drinking light pilsners or lagers in a can from large-scale breweries like Miller-Coors is perceived as a far cry from, say, slowly drinking a bottle of Pliny the Elder Double India Pale Ale from the Russian River Brewing Company. Within the last decade, craft beer has become its own status symbol.

And the microbrewed beer labels have begun to reflect this affect. The florid descriptions of beer on these labels or on menus at the brewery and the fine art created by graphic designers work together with the carefully selected ingredients in order to elevate beer and to recast the beverage as haute cuisine. This marketing is not all that different to how both male and female brewers in antiquity began to cast their trade as an ars (a skill) in inscriptions and to imitate the way that vinarii (wine sellers) cast their trade. As it turns out, the artisanal food movement occurred long before Whole Foods opened its doors. One Roman negotiator (trader) from Trier boasted of his knowledge of the ars cervesariae—the skill of brewing (AE 1998, 954), while a woman named Hosidia Materna identified herself as a ‘negotians artis cervesariae sive cereariae’ (CIL XIII, 450). She is proud of mastering the art of making cervesa. 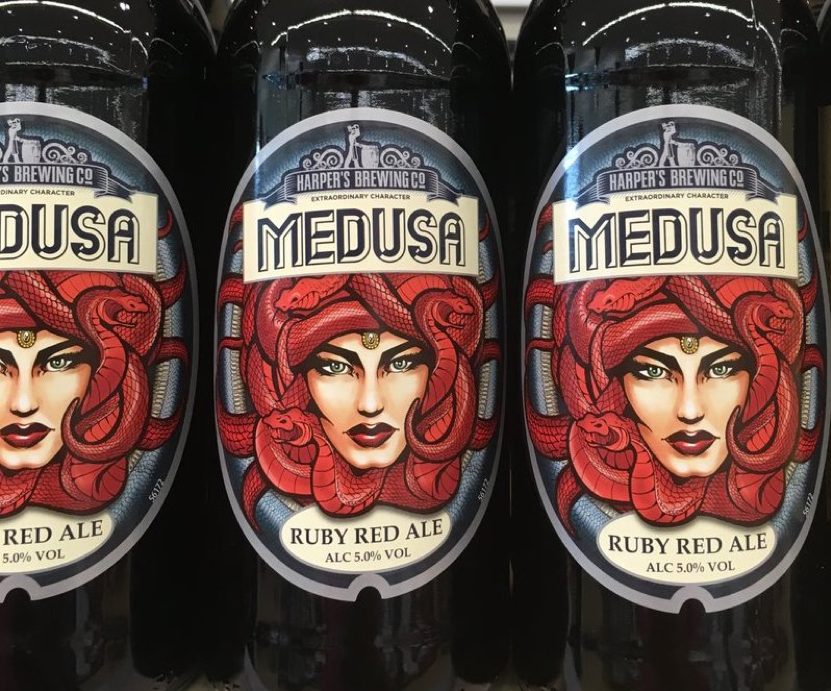 Figure 3: The Medusa Ruby Red Ale from Harper's Brewing Co. in Witney, England uses the gorgon to lure in its drinkers, but hopefully does not turn them to stone (Photo by Sarah E. Bond).

I do not point these parallels out as a means of demeaning microbrewers or putting down the craft beer movement as pretentious. Far from it. I use it as a way of showing how and why Classicists today can put their knowledge to good use. Just as classical reception comes in many forms, so does public outreach. Over a year ago, I and a number of my colleagues at the University of Iowa began to give lectures at Big Grove Brewery here in Iowa City. We contacted the head of PR at the brewery and simply pitched a lecture series on a number of topics connected to the history of alcohol. I spoke on ancient and medieval beer, while other professors like Tom Keegan discussed the culture of drinking in James Joyce’s Ulysses. In a few weeks, Dr. Josh Radke, a toxicologist at the University of Iowa hospital, will be speaking on the history of alcohol poisoning. A group of archaeologists even discussed the use of beer caves in the Midwest and Lidar scanning of the beer caves that sit underneath Iowa City. In short? We decided to meet the public where they are. As it turns out, that place is the pub. 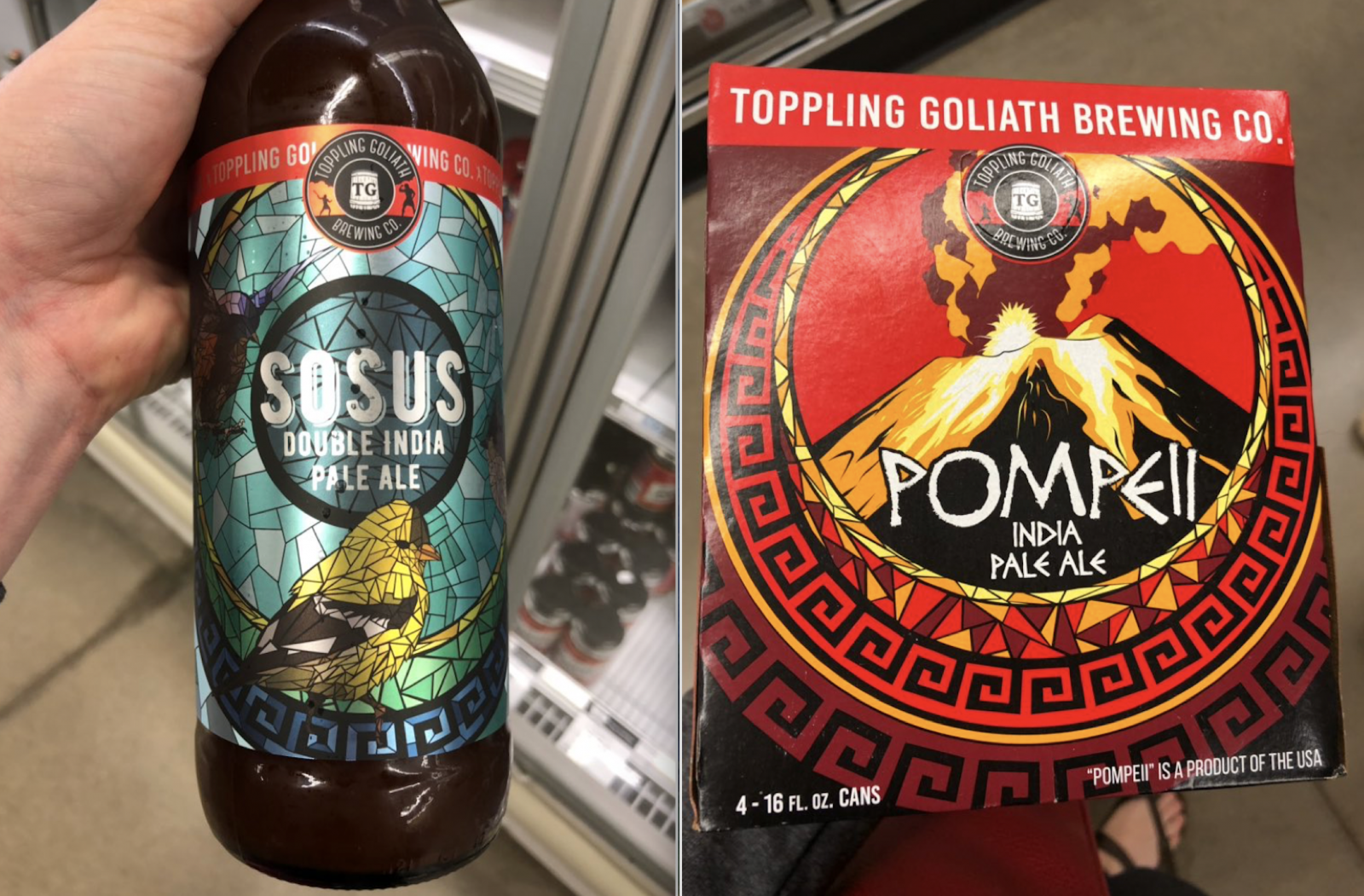 Figure 4: Beer labels from Toppling Goliath Brewing Co. in Decorah, Iowa, often have a classical theme. One draws on the famous bird mosaic of Sosus, while another popular brew recreates the imagery of Vesuvius (Image taken by Sarah E. Bond).

There are many ways to do public engagement in Classics. It is not just about blogging or about op-eds in The Wall Street Journal. From reading ancient literature within prisons to visiting middle schools, outreach is often about making the time to leave the ivory tower and engage with others through words, through art, or through lecturing. Particularly in places without large museums with classical collections or high school Latin programs, having Classicists going out into the community can demystify what the heck Classics even is. And perhaps inspire the next classicist to take Latin or Greek. Trust me: they want to listen and to be a part of our world. The stereotypes of classicists as elitist and pretentious academics can and should be actively dispelled. We have the power to do that, but it does mean a bit of relabeling on our part is in order.

Figure 5: A lecture on ancient beer at Big Grove Brewery in Iowa City, IA as part of the "History at the Grove" beer history lecture series.

Header Image:The “Ale Caesar! Honey-Sage IPA” features the Augustus of Prima Porta, as well as a quote from Vergil’s Georgics. It was designed by UT-Austin Classics graduate student Colin MacCormack.