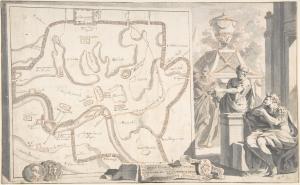 Digital Augustan Rome is a web-based platform that provides a visual synopsis, with textual commentary, of contemporary scholarship on the topography of Rome, c. 14 CE. On the project’s homepage, the director David Romano emphasizes that DAR is in only the second of four planned stages (as of April, 2017). Even at this stage, however, DAR already constitutes a significant contribution to scholarship on the topography of Augustan Rome. I would highly recommend a visit to the site.

DAR is a digital successor to the 2002 print volume Mapping Augustan Rome.[1] In its current form, it relies almost entirely on material that has already been published and reviewed.[2] In this review, therefore, I focus primarily on those aspects of the project that are unique to DAR—namely, its presentation of the material in a specifically digital format. I begin with a brief introduction. I then proceed to highlight what I see as DAR’s two most significant strengths, as well as several areas for improvement.

At the heart of DAR is a digital map that represents a “period plan” of Augustan Rome and its immediate surroundings. It traces out known building plans, labels prominent landmarks and regions, and uses color coding to distinguish streets, built up areas, open spaces, gardens, water features, etc. It also provides contour lines calibrated to the Augustan, rather than the modern, landscape. It supports panning and four levels of zoom through an interface that will be familiar to any user of Google Maps or Google Earth. The overall result is an impressive platform that feels intuitive to the 21st century digital native but nonetheless manages to convey the impression of an antique map.

On its default settings, DAR populates the map with 353 blue indicators, each of which bears a unique identification number that corresponds to a known site whose location can be reliably determined. Scroll over any indicator, and the name of the associated site pops up. Click to open the directory, which briefly introduces the site and justifies the way in which the developers have chosen to represent it.

The entry for Clivus Palatinus, for example, explains that only the lower segment of the street is represented, because “no traces of the Republican or early-Imperial street remain higher up the Palatine slope.”

In addition to this default mode of navigation, DAR provides four other options. Users can search the directory to look up any of more than 400 listed sites, including roughly 50 that are unlocated. They can also filter results to display only certain types of sites (e.g., “Sewers” or “Predominantly pre-Augustan structures”) and switch to “Terrain” and “Satellite” modes. More on these in a moment.

Mapping Augustan Rome—i.e. the print volume of which DAR is a digital successor—was a significant contribution to the study of Roman topography. Unfortunately, casual access to the text has been restricted to the select few with borrowing privileges at one of the small number of (typically elite) institutions that possess a copy.[3] DAR, in contrast, makes this same information available to anyone with an internet connection. In so doing, it exponentially both expands and diversifies its potential audience to include, for example, faculty at the thousands of colleges and universities that lack copies of Mapping Augustan Rome, high school history classes, and tourists taking their first trip to Rome. For this alone, DAR is a significant advance.

Traditionally, scholarship on Roman topography has relied on topographic dictionaries, lexica, and gazetteers—e.g., Platner and Ashby, Richardson, LTUR, Mapping Augustan Rome—that present sites in alphabetical order. In Mapping Augustan Rome, for example, the entry entitled Regia appears on the same page as Quirinus, Aedes, and the habitual user gradually internalizes the implicit association between the two sites, which in fact had very little to do with one another. DAR, in contrast, presents sites—and thus encourages users to conceptualize them—both in their proper geographic context and in relation to the nearby sites with which they were often intimately related.

Let me elaborate. Clicking on icon number 138 reveals a description of the Regia that is identical to the one found in Mapping Augustan Rome. It also, however, centers the map on the site, emphasizing the fact that, by the Augustan period, the Regia had been incorporated into a larger complex.

A few waves of the mouse reveal that the complex also included the Aedes Vestae, the Aedes Divi Iulii, and the Arcus Augusti, information concerning all of which can be easily accessed by clicking on the relevant icons.

Switching to the “Terrain” mode emphasizes the position of the complex just at the base of the Palatine, while switching to the “Satellite” view allows those users who have visited the Forum to situate the complex vis-à-vis their own memories of walking through the archaeological site. In combination, these three options allow DAR users to imagine Augustan Rome more easily, accurately, and completely than ever before.

As indicated above, the project’s homepage characterizes DAR as a work in progress. Progress, however, appears to have stalled.[4] This is unfortunate, because DAR in its current form has plenty of room for improvement.

On one level, a few small tweaks could substantially improve the user experience. For example, the addition of a scale and key to the map—both present in the print version—would facilitate use; the ability to rotate the map would help users break free from the anachronism of North-oriented mapping;[5] and an option to display street names in the “Satellite” mode would help users situate ancient sites vis-à-vis their knowledge of the modern city. More ambitiously, I can imagine a network of accredited contributors, on the model of Pleiades, who could help improve DAR by, for example, adding the photographs, plans, and ancient literary references that Romano identifies as the project’s next logical progression; or continuously updating the gazetteer to reflect the findings of current scholarship. Such a collaborative interface would allow DAR to more fully exploit the unique possibilities afforded by digital humanities scholarship.

To conclude, DAR in its current form is a valuable tool for anyone with an interest in Roman topography and/or Augustan Rome. As Romano and his team continue to develop the website, it should become even more valuable. I very much look forward to seeing what the future holds for DAR.

[5] L. Haselberger emphasizes the anachronism of North-oriented mapping on the DAR website. See also E. Rodriguez Almeida 1988, “Un frammento di una nuova pianta marmorea di Roma,” in JRA 1 (1998): 120-131, for the persuasive argument that Augustan depictions of Rome were oriented with the Southeast at the top.

I am a lecturer in the Department of Classics at Dartmouth College. My research focuses on the political and economic history of the ancient Mediterranean, broadly construed. My book project examines the nature, frequency, and intensity of political violence in the c. 1,100 poleis inhabited by the ancient Greeks during the Classical and early Hellenistic periods. It also introduces new methods and new tools to overcome three of the most significant obstacles that face attempts to study Greek history on a panhellenic scale: the scarcity, ambiguity, and deep biases of the evidentiary record.