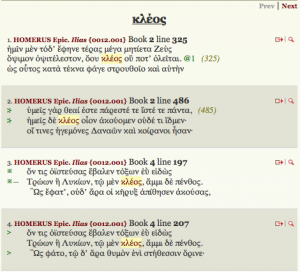 Users can perform text searches by word index, by lemma, or by text. Users can look for a single word, lemma, or phrase, or for up to three words, lemmata, or phrases in proximity to each other. Any search can also be performed upon single texts or authors, or any combination of texts or authors.

Digitized texts excel traditional sources precisely in their searchability, and as the TLG has expanded, it has become a powerful tool for finding words, phrases, and forms in a catalogue of more than two millennia’s worth of Greek texts. The sheer number of combinations and re-combinations that any user can devise will surely lead to new innovations in the ways readers can engage with Greek language and literature. These kinds of searches provide an immediate resource for scholars and teachers of Greek who want to find passages with particular words, phrases, or forms. Obviously, the ability to track down this or that form, locate a passage with a unique word, or see if any other author uses these two or three words together has value, but proximity is not context. Any reader who wants to explore the meanings of words and phrases is still better advised to begin with the citations in a lexicon or grammar.

A standard feature of the TLG has been the ability to browse any text in the corpus. With the redesigned interface, users now have the option to browse two texts side by side. Scrolling is not possible; users must page through the various texts.  Before the TLG offered parallel browsing, paging through the text seemed quaint but not burdensome. When comparing two columns of text, though, the inability to scroll is a greater inconvenience.

On the other hand, many of the TLG’s features enhance the experience of browsing and reading texts. Clicking on any word generates a morphological analysis of that lemma and links to various lexica.

The parsing capabilities of the morphological analysis are superior to those of Perseus. Clicking on ἅς at Plato’s Laws 832b10 in the TLG, for instance, provides only the correct analysis: “pronoun fem. Acc. pl.” Clicking on the same word in Perseus provides five possibilities. In addition to the correct form, the others given include the Doric/Aeolic conjunction (ἕως), to which Perseus assigns a 63.6% chance of being correct, the singular feminine genitive Doric/Aeolic form of the relative pronoun (which Perseus defines as “yas, yā, yad”), and two different forms of the third person possessive ὅς, ἥ, ὅν. While traditionalists might object that parsing is the reader’s responsibility, the TLG’s more accurate parser could conceivably put reading Greek texts within the reach of those who are early in their study or have less training in the field.

Clicking on any word in a text also connects the user to a long list of available lexica. Four of these, the LSJ, Cunliffe, Powell, and the LBG, are hosted by the TLG itself. The links for the Middle LS and Slater’s Lexicon to Pindar take the reader to Perseus; other links take the user to the Portal for the Greek Language—to consult the Epitome of the Kriaras Dictionary and the Triantafyllidis Dictionary—and to the Diccianario Griego-Español. Short definitions, without citations, from Bauer’s Lexicon of the New Testament and Lampe’s Patristic Greek Lexicon appear in the dialogue box itself.

Given the various backgrounds of the TLG’s users and the constantly expanding range of texts, the variety of lexica is an asset. The trend away from Anglo-centric sources is also welcome.

The four lexica that that the TLG hosts can also be consulted directly and without linking to them from within a text. Digital versions of the LSJ is available on Perseus, ΛΟΓΕΙΟΝ and on Philolog.us. ΛΟΓΕΙΟΝ and Philolog.us also provide apps for mobile devices. Different hosts offer different advantages to the user, but a particular advantage of using the TLG’s lexica is that (with the exception of the LBG) each citation in the definition is hyperlinked to the precise passage of the relevant text.

The new interface also allows users to explore texts with N-grams, or “overlapping sequences of context words in the texts.” The primary difference between searching with N-Grams and performing Proximity Text Searches is that for N-Grams, the TLG automatically searches the entire text and determines which two or three word strings reappear in other texts.

Turning on the N-Gram feature for the first lines of Herodotus allows the user to see at a glance which substrings of (case-sensitive) words appear in proximity in the rest of the TLG corpus. Ἕλλησι and βαρβάροισι, for instance, appear once more in Herodotus (5.97.19) and once in the Frogs (724). Users can also pick two authors or texts to compare, as I did in the screen shot above.

The results of an N-gram search could potentially be very interesting, but these searches also create a lot of noise. Rather unenlightening, for instance, is the revelation that φασὶ γενέσθαι is a common collocation. On the other hand, for anyone interested in closely comparing the vocabulary of particular authors or texts, the tool should prove useful. As with many other features of the TLG, the ultimate value of N-gram searching will be revealed by the ends it achieves.

Another new feature of the TLG is the ability to generate statistics. With this feature, users can select texts or combinations of texts and generate graphs representing, for instance, the frequency of word forms or which lemmata are over- or underrepresented in any given text.

Finally, the TLG provides several vocabulary tools for its users. Users can select an author or text, and the TLG will generate a list of the lemmata and word forms (sorted by frequency) and digital flash cards which the user can scroll through to drill vocabulary. Like many of the features of the TLG, the value of the vocabulary tools for students and teachers of Greek is obvious.

Overall, the TLG provides an incomparable tool, especially for the distant reading of Greek texts. For users who require access to a vast library of works all of which are available without leaving one’s workstation, there is no other resource that approaches the value of the TLG. Readers can jump from text to text, easily look up words in several lexica, and track down nearly any citation imaginable. The texts are all digitized from scholarly editions. Teachers looking for examples of forms can generate exhaustive lists in mere moments, and students looking to find words and forms in use are limited only by their own imaginations. As a reference library, the TLG will never disappoint.

As a tool for close reading, the TLG offers less. The criteria for the selection of which editions of texts to digitize is not immediately obvious. For the Iliad, users get Allen’s OCT, but von der Mühll’s Editiones Helveticae version of the Odyssey. The TLG provides only one edition of most texts, so for Plato’s Republic users can consult Burnet, but not Chambry. When more than one edition is available, it is often a newer OCT—so users can consult both Diggle’s 1994 edition of Orestes and the 1966 reprint of Murray’s 1902 edition. As far as I could find, no text is supplied with an apparatus criticus, a fact that limits the possibility of using the digitized texts for scholarly work.

In order to prevent anyone from copying entire texts, the TLG has set a limit to the number of pages that users may access. Though the general policy is explained in the FAQ, no information is given there regarding the precise amount of usage that the TLG considers excessive. Users who cross the line will find their IP addresses blocked (temporarily, I presume, though blocked users are advised to contact the TLG). In an era of tightening library budgets, this policy is counterproductive. Librarians often compare raw usage numbers from one database to the next to determine which subscriptions to keep. Compared to the amount of traffic that databases in the sciences and other disciplines generate, philologists simply will not compete. The TLG’s policy of limiting user traffic even further, therefore, is short-sighted.

In the course of writing this review, I accessed the TLG via Safari on my desktop and iPad. Occasionally, the usual kinds of nuisances that attend digital resources popped up. For instance, the link to the LBG provided by the TLG, www.tlg.uci.edu/lbg, led to a 403 Forbidden error. Conversely, the link provided by Google, stephanus.tlg.uci.edu/lbg/#eid=1&context=lsj, functioned normally. I also sometimes experienced difficulty scrolling through long lists of search results. On the whole, however, the TLG is stable, fast, and reliable.

Users who want to learn more about the capabilities of the TLG can consult an immensely useful collection of Help Files.

DESCRIPTION: a comprehensive digital library of Greek literature from antiquity to the present era

(Header Image: Screenshot from of the entry for κλέος. Accessed Dec. 19, 2016, http://stephanus.tlg.uci.edu)

Scott Farrington is an Assistant Professor of Classical Studies at Dickinson College. His research interests include history, tragedy, and ancient literary criticism. He has published on conceptions of tragedy, history, and rhetoric in Polybius and Hellenistic historiography. farrings@dickinson.edu

07/23/2021
Blog: “Can We Strangle the Muse?”: Carson and Bruno’s The Trojan Women
By Christopher Trinacty, Emma Glen, and Emily Hudson (Oberlin College) Anne Carson’s celebrated adaptations and...
07/12/2021
Blog: Contingent Faculty Series: A Conversation with Daniel Libatique
Our fifth interview in the Contingent Faculty Series is a virtual conversation between Dr. Taylor Coughlan and Dr...
07/06/2021
Blog: Six months in(surrection)
Today marks half a year since insurrectionists stormed the U.S. Capitol, occupied the Senate chamber, violently...
06/28/2021
Dissertation Spotlight: The “Oracular Tale” and the Oracles of the Greeks
Joseph Fontenrose’s The Delphic Oracle (1978) fundamentally reshaped how we think about Greek oracular divination...
06/24/2021
Blog: Ancient Worlds, Modern Communities: Connecting to the Ancient Greeks through Medicine, Sociology, Literature and Philosophy
The Ancient Worlds, Modern Communities initiative (AnWoMoCo), launched by the SCS in 2019 as the Classics...
END_OF_DOCUMENT_TOKEN_TO_BE_REPLACED