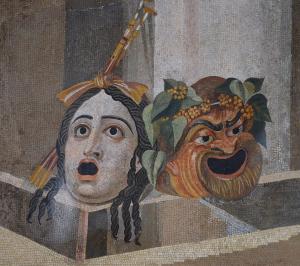 Ancient comedy was a thoroughly performative genre, meant to be seen and heard, not read. This point should be obvious, but it can easily get lost in a traditional college or university course on comedy in translation, given the textual nature of the transmission of comedies, their distance in time and culture, the difficulties presented by translated material, and the demands and traditions of teaching Greek and Roman literature generally. In this post I describe a comedy-in-performance assignment that T.H.M Gellar-Goad and I created and have used in teaching general-education courses at two different American universities. One of us employed it in lieu of the usual final exam and term paper; the other was bound by writing seminar standards to include a term paper in addition to the performance project. The basic idea is flexible enough to fit drama of any period or genre, and could be used in various levels and types of courses (not, admittedly, massive lecture courses), for teaching in the original languages, and for inclusion as a smaller unit within a larger course. Neither of us had prior experience acting or directing.

Who. The courses in which we used the assignment (four times in aggregate) ranged from 19 to 37 students of diverse backgrounds, with various levels of preparation for reading, writing, and acting, and varying degrees of knowledge and interest in ancient Greece and Rome. Some were majors or minors in our respective departments—and some became majors or minors because of our courses—but the majority were passing through to fulfill core requirements.

What. The assignment, which constituted the largest part of the course grade, asked students to work in a small group to condense a full play of Aristophanes or Plautus into 10–15 minutes, adapt it in some fashion (e.g., modernizing it, or incorporating musical numbers), and perform it without scripts in front of a live audience. In some iterations, the audience consisted of middle school and high school attendees of a state Junior Classical League convention and their parents, so the adaptation process additionally entailed bowdlerization, particularly for Aristophanes.

The assignment is broken down into stages, beginning relatively early in the term and stretching beyond the day of the performance itself:

1.     The Belbin Team Instrument, which assesses how an individual behaves in a team environment. The results, student reactions thereto, and judgments based on our own observations of students were combined to inform the assignment of students to groups of 3–5 members.

2.     A Group Charter, composed separately by each group by consensus and signed by each group member. This acted as a governing document for that group’s policies and procedures.

3.     A group-written paragraph describing the group’s desired play and its intended “take” in adapting the play.

10.  An individual group efficacy reflection, assessing the functioning and success of both group and self.

11.  Project records, submitted individually at the end of the term, to pull together the semester’s work, with a new executive summary narrating each student’s experience and learning throughout the term.

Not every component required the same level of scrutiny, feedback, time on task, or grading effort from us as instructors. Preparation for the performance process included performance of short in-class skits, frequent reading-response homework, and daily class discussion of texts, interpretation, and performance issues. In some cases we added a Q&A session with guest students majoring in theater, or mini-presentations on acting, theatre, and production.

When and where. The performances took place in lecture halls, with no special staging, lighting, or audiovisual equipment (with the exception of accommodations for students with vocal and auditory neurodiversity) near the end of the semester, but before the final crush of deadlines and exam study sessions.

Why. This assignment gives students the opportunity to engage in lively, in-depth, hands-on learning with ancient texts, an experience that most of them will remember for years, if not for the rest of their lives. It can replace a “school genre,” such as a term paper or exam essay, with a writing and speaking task carried out for a real audience. This replacement also fosters a more inclusive learning environment, where students who are not experts in these school genres can demonstrate their engagement, academic effort, and achievement alongside their peers who are polished test-takers and essay-writers.

The condensing of the play, while preserving its humor and fun, challenges students to think analytically, synthetically, and creatively, and to engage in close readings and deep interpretations (including social-historical inquiry) of ancient texts. The carefully structured, scaffolded, and supported group assignment develops students’ abilities to work in teams and (in most cases) changes student perceptions of the value, nature, process, and experience of teamwork—a learning outcome with tangible positive effects for their futures, regardless of career path. The assignment also recreates for students, instructors, and spectators alike the joy, complexity, art, and humor of ancient Greek and Roman comedy.

Results. This assignment has been unambiguously successful for each of us each time we have offered the course. The written results showed clear evidence of our students’ learning, critical thinking, and intellectual curiosity about the subject matter. The performances themselves were amusing amateur theatrics rather than polished professional productions. Nevertheless, the audiences consistently had a good time—and occasionally a group hit on a brilliant social critique or an inspired comic routine.

Initially student resistance both to group work and to public performance was high. We repeatedly emphasized, however, the support structure we constructed, our confidence in students’ ability to succeed, the value we place on group work skills, the care with which we construct and monitor groups, and the fact that, just as in writing a dissertation “done is better than good,” so in producing a comedy “fun is better than good.” Students’ stress levels inevitably spiked in the week or two leading up to the performance, and some groups worked less effectively than others, but the typical pitfalls of uncritically and unconscientiously designed group work assignments (one person doing all the work, plagiarism, group infighting) were rare, largely prevented by the design of the assignment.

Want to know more? Check out the appendix with assignment documents and some performances, or email one or both of us! The 2012 NEH Institute on “The Performance of Roman Comedy” also offers a website and performance videos.