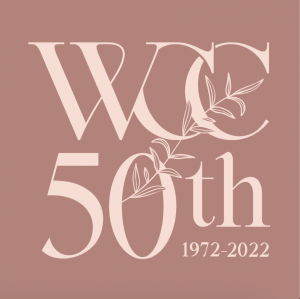 Figure 1: A screenshot of three of the SCS elected officers in 2021, all long-time members of the WCC.

This year, the WCC celebrates its 50th anniversary with a year-long celebration including a variety of projects, events, and initiatives that both feature the WCC’s rich history and build on that history to advance its mission for the betterment of all in the field. Our goal is to highlight WCC’s 50 years of engaging and shaping the profession through a feminist practice of scholarship, pedagogy, activism, and advocacy. We are hosting two panels this year at the 2022 Annual Meeting, including one specifically on WCC’s past, present, and future (check out our SCS schedule here). During this celebratory panel, we will discuss the history and development of the caucus, as well as current challenges, issues, and opportunities. The WCC has come a long way and remains committed to cultivating a robust, supportive community among its increasingly diverse membership.

Read on to see how we have expanded our engagement and programming to prepare for the WCC’s 50th Anniversary!

Honoring Our Ancestors & Preparing for Our Future

As part of our 50th-anniversary kick-off celebration, we have launched a special page on the WCC’s website called “WCC at 50,” which celebrates the enduring contributions of the WCC’s founders, leaders, members, and allies throughout the years. We document the WCC’s six founding mothers and father — Leona Ascher, Judith Hallett, Marilyn Arthur Katz, Sarah Pomeroy, John P. Sullivan, and Dorothea Wender — and their work in first establishing the organization and then fighting to secure significant victories in making the profession more equitable (e.g., implementing anonymous peer review processes for conference abstracts and journals).

The “WCC at 50” page features a compilation of interviews and reflections on what the WCC has meant to members throughout its fifty years, testifying to the impact the WCC has made and continues to make in the field. This page is an ongoing oral history project started by the current executive committee, which we will continue to update over time with more interviews and historic materials, including links to other resources, such as the SCS Blog Series: Women in Classics.

A New Purpose & Look for the WCC

To provide more platforms for connectivity among members and to help each other fight against the exhaustion of the pandemic, the SC took the two-pronged approach of [1] pursuing regular outreach through special topic programming and [2] building more robust internal systems to keep members connected with each other and the WCC leadership throughout the year. In addition, new co-chair Caroline Cheung reminded us that 2022 would be the WCC’s 50th anniversary year, and the rest of us agreed that we should commemorate the occasion. With input from current and previous SC members, new co-chair Suzanne Lye put together a plan to launch new outreach initiatives along with a new internal organizational structure in preparation for the WCC’s 50th celebration.

Deepening Our Connection with Members: The WCC Website Redesign

In August 2021, the WCC launched a revamped website, with a new look and feel created by WCC member Patricia Eunji Kim. As part of the new website, WCC Membership & Events Director Adriana Vazquez launched our new membership portal, allowing members more control over updating their profiles and the ability to more easily register and access information for WCC events. As the information hub of the organization, the new website provides a living archive and ongoing history of the WCC, as well as an inviting and intuitive platform for current and prospective members to stay informed and get involved with our advocacy and monthly slate of events. 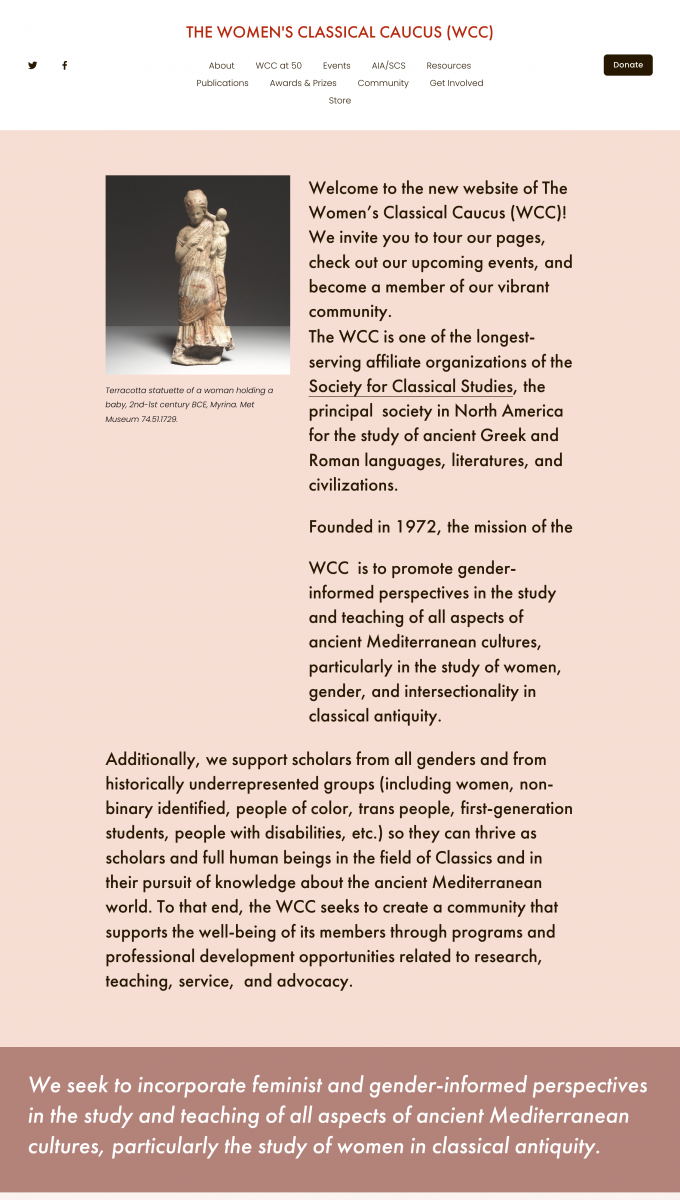 Additionally, having readily available, up-to-date information about our members through our new membership management system has enabled us to respond quickly to feedback and plan innovative programming, such as our multi-part series on Reflective Pedagogy, Social Justice, and AcaParenting. Our updated technology has also allowed us to be more creative in helping members support each other, whether by gifting memberships to others or by donating directly into our equity funds. Through our new, agile website and increased social media presence (courtesy of our Social Media Director Amy Pistone), we continue to connect with and build our community.

Showing WCC Pride: A New Logo and A “Pay People for Their Work” Initiative

To go with our website makeover, we also commissioned a new WCC logo that honors our past while also speaking to the continued strength, grace, intellect, and diverse identities of our members. After brainstorming over a word cloud full of adjectives and favorite images, we developed a set of modern designs that celebrate our field’s Greco-Roman subject matter and capture the WCC’s resolve to confront challenges head-on as a leader in the field of Classics. We also added a few limited-edition designs for the WCC 50th anniversary and made all of our new WCC designs available for purchase on products in the new WCC store.

Figure 3: Some of the logo redesigns for the WCC's 50th anniversary.

Commissioning the designs and opening the store are a key part of our new “pay people for their work” initiative, through which we seek to compensate our early-career contributors, designers, and vendors for their labor in developing WCC offerings. WCC remains a non-profit without an endowment, which means its ability to run programming is rooted in the annual financial contributions of its members and the astute money management of the Treasurer (currently Eunice Kim) in conjunction with the co-chairs. We are using proceeds from the store, membership fees, and donations to replenish WCC’s equity funds and support our most vulnerable members.

During this past year in the lead-up to our 50th anniversary, we have been experimenting with various types of programming and collaborations to see how our members want to engage.

The results? We are now a year-round operation!

Providing spaces to discuss scholarly interests and advocacy as well as workshops for professional development, the WCC has sponsored collaborations with partners on events involving members of all ranks, from students through senior and emerita professors. Through our monthly Reading Groups, professional workshops, redesigned mentorship program, and gatherings around identity and social justice, we have created several templates for events that we plan to repeat and expand on throughout our WCC 50th year and beyond.

A key initiative through which we are building our programming is the redesigned WCC Mentorship Program, which now consists of two models: a year-long cohort model and a short-term, on-demand model. The former, overseen by Cohort Mentorship Coordinator Cassandra Tran, fosters a more sustained, year-long mentoring relationship among peers and senior scholars in the field with structural support from WCC in the form of information sessions and regular check-ins with participants; the latter offers temporary, targeted guidance on specialized topics, particularly professional advice. Recently, the WCC Mentorship Team, led by Treasurer & Mentorship Director Eunice Kim, hosted a “Conferencing 101” pop-up event for both members and non-members featuring panelists who are all volunteer mentors in our on-demand program.

Because of the high engagement of our members in this year’s programming, we have committed to continuing our online events and programs year-round. Through these, we are dedicated to providing resources and meeting spaces that honor our members’ many identities, interests, and passions. Additionally, as in-person meetings become more possible, we hope to plan and sponsor local gatherings hosted by WCC members. In expanding the scope of our programming, the WCC is working to cultivate its presence as a rich and engaged community, in the tradition of the founders’ vision for the WCC.

WCC at 50: A Legacy of Advocacy & Activism

In the shadow of such a long legacy of activism and advocacy, we in WCC’s current leadership feel a profound sense of responsibility to continue and further the efforts of those who have gone before us. We are proud of what the WCC as a community has accomplished this year. We also recognize that new and ongoing challenges face many members of our field today, particularly around issues of race and class as they intersect with gender. For 2022, we will continue to collaborate with our members and partner organizations to provide programming that supports social activism, innovative pedagogy, and cutting-edge scholarship. We will also expand our Publishing Series and sponsor a new “Careers” Series to educate members on both academic and non-academic career options for those who have degrees in Classics and ancient Mediterranean studies.

The WCC’s longevity and ability to support its members depend on its evolution with the times. The many events and activities the WCC has launched as a part of the year-long preparation for its 50th anniversary illuminate several important directions the WCC must and will take into the future.

As WCC co-chair Suzanne Lye says: “Come as you are, grow as you go.” We invite everyone committed to making our field a more equitable place — while also having fun! — to join us this year in celebrating fifty years of the WCC. There is much work still to do. At WCC, we believe we all rise together and are committed to fostering communities of care. 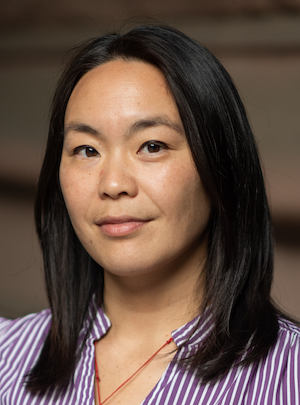 Caroline Cheung is an Assistant Professor of Classics at Princeton University, whose research focuses on the socio-economic history of non-elites in the Roman Empire, ancient agriculture and food, and craft production. Her first book project is on dolia, the largest type of pottery in the ancient world that was used for food storage. 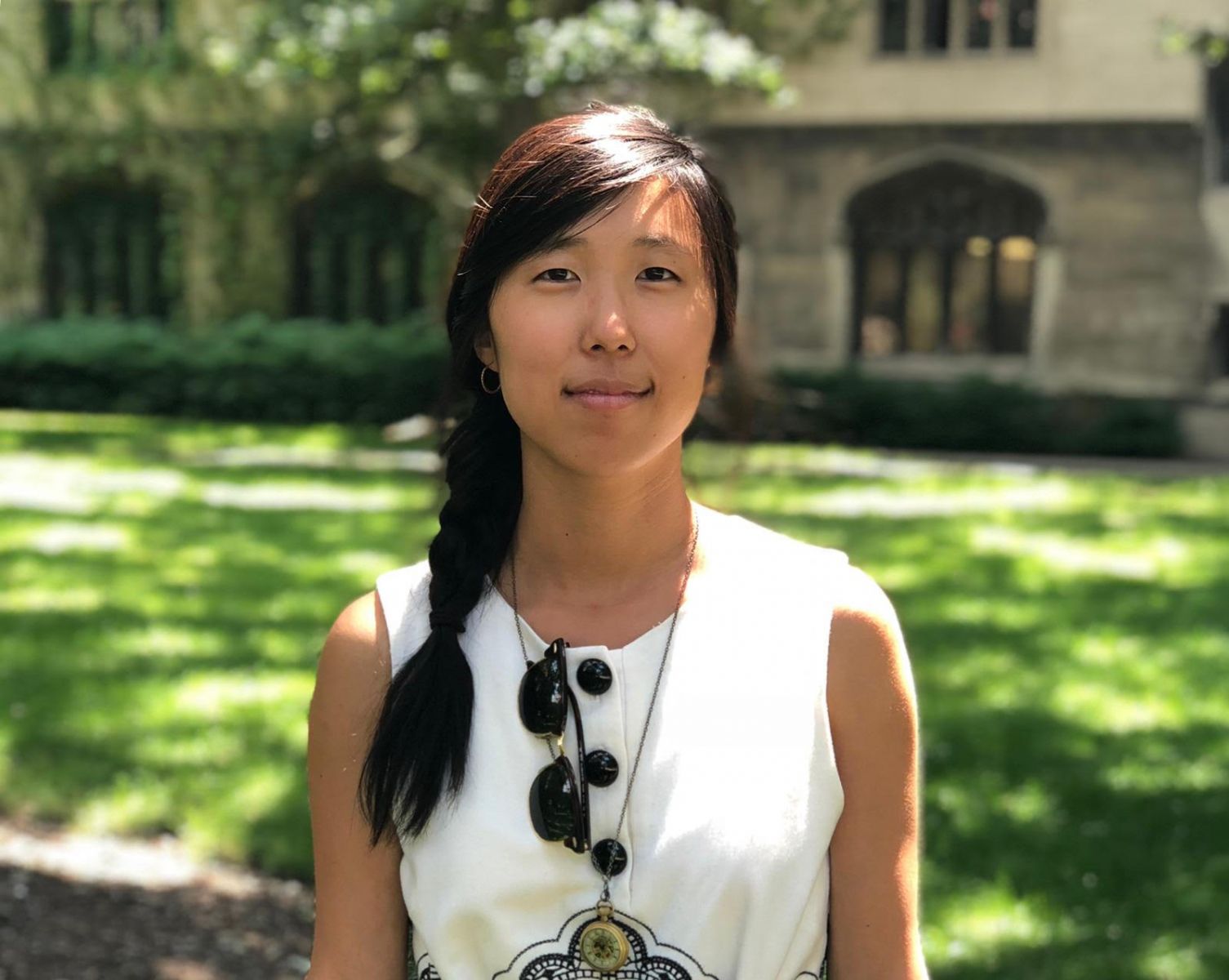 Eunice Kim is an Assistant Professor of Classics at Furman University. She works primarily on archaic Greek poetry but enjoys teaching general Classics courses and Greek and Latin at all levels. She also has long-standing interests in myth, Indo-European poetics, and comparative and historical linguistics. Her current project is a study of murder and exile in early Greek myth. 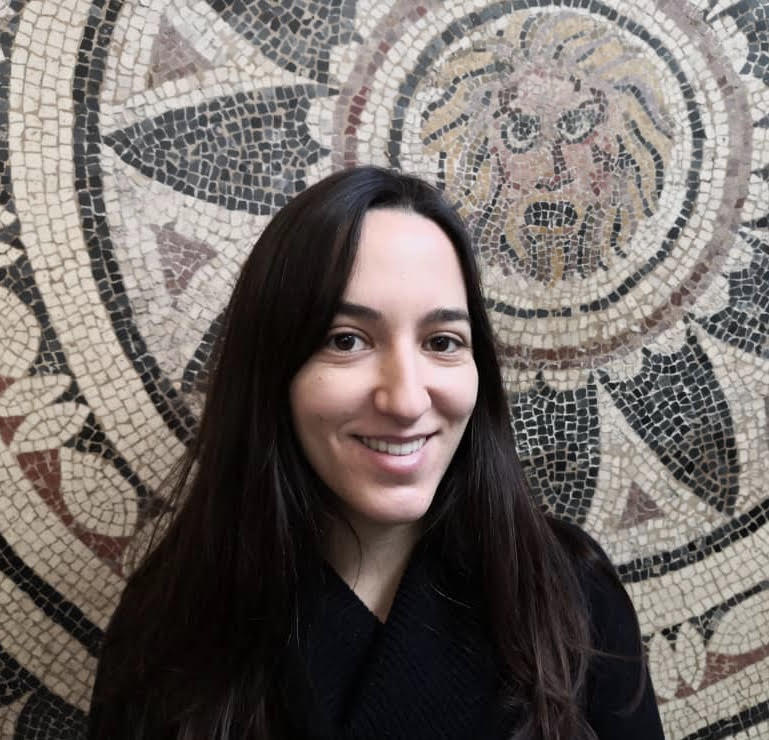 Adriana Vazquez is an Assistant Professor of Classics at UCLA. Her research focuses on Augustan literature and its reception, with a particular interest in Hispano- and Lusophone literatures in colonial contexts. Her current book project presents a study of the reception of antiquity in Brazilian neoclassical poetry of the eighteenth century.

Suzanne Lye is an Assistant Professor of Classics at the University of North Carolina at Chapel Hill. She has published on ancient Greek literature and culture, ancient religion and magic, ancient representations of gender and ethnicity, and classical reception in film. Her first book project examines Underworld scenes in ancient Greek literature, and her second book project focuses on women’s anger and magic in the ancient world.