In March’s column, I examined the pattern I term “sinister adaptation” in Fifty Shades of Grey, The Hunger Games, and Game of Thrones: the cinematic or television adaptation exaggerates violence against women present in the source-text or adds in violence that was not previously there.  Today, I contrast these examples (and one more American film) with Terentian comedy and Senecan tragedy. 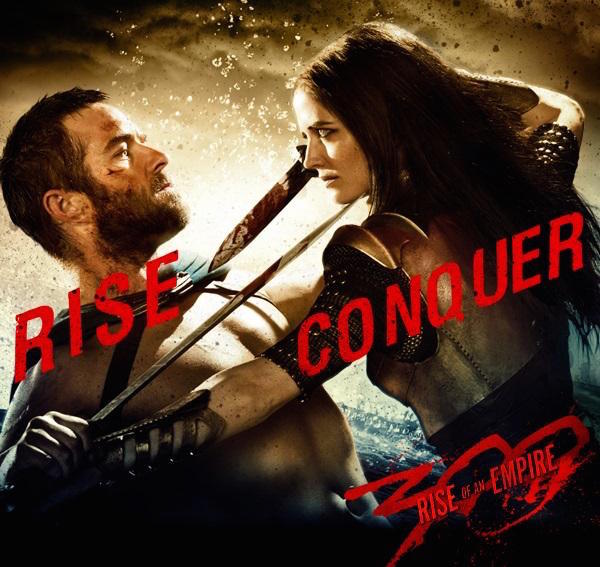 My final Anglo-American example of sinister adaptation is a film drawing upon Graeco-Roman antiquity, 300: Rise of an Empire.  This film — a sequel to 300 (which was based on Frank Miller’s comic book by the same name) that predates Miller’s own still-unpublished comic-book sequel Xerxes — retells the Greeks’ struggles and successes after Thermopylae, at Artemisium and Salamis.  Artemisia, who in Herodotus was the wisest and bravest of Xerxes’ commanders and councilors, is in the movie portrayed as a bloodthirsty, outrageously over-villainous nemesis to the hero of Marathon, Themistocles (if that phrase makes your brain hurt, see here).  Around the movie’s midpoint, Artemisia turns her parley with Themistocles into an aggressive bout of sex with him.  Shortly thereafter, viewers learn Artemisia’s backstory, as if by way of explanation for her ravenous violence and sexuality: as a child she was captured by pirates and serially raped until Xerxes’ father rescued her and raised her as a daughter.  Herodotus’ Artemisia, whom his Xerxes remarked outshone all his other ship-captains at Salamis, has become a one-note stereotyped femme fatale driven to depravity by the trauma of rape, and is furthermore stripped of her royalty, civic responsibility, and her cleverness.  Ultimately she is killed by the widow of Leonidas and never gets to switch sides back and forth with her Herodotean level-headed sense of self-preservation.

Roman drama itself is a genre of adaptation — from Livius Andronicus through Plautus and Terence to Seneca the Younger, Roman playwrights by and large adapt Greek models.  Terence in particular is a sophisticated and provocative adapter of Greek New Comedy, whose stock scenarios, characters, and resolutions allow for interpretation of Roman adaptation even in the absence of the specific Greek source-play.  And Terence on two occasions adds violence against women in his versions.

A standard, disturbing generic plot in New Comedy involves the rape of a citizen girl, whose marriageability and future are thereby compromised.  The rape always (in extant, fragmentary Greek New Comedy and in most Roman comedy with such plots) takes place before the play’s beginning, at night, while the girl is returning home from a festival and the rapist is drunkenly prowling the streets.  Generally, a struggle ensues, during which the victim grabs an item from the rapist before he leaves.  The climactic moment of the play is the recognition of this token, which facilitates the identification of the rapist and his subsequent betrothal to his victim (a satisfactory resolution for the men characters in Menander).

In Terence’s Hecyra, the ring that effects the central recognition — that Philumena’s rapist is in fact her now-husband — was not taken by her from him during the rape.  Instead, he stole it from her during his assault on her and took it back as a gift for the sex-laborer of whom he is enamored.  Terence’s Eunuchus replaces the genre’s stock rape backstory with a premeditated, sober, daytime, during-the-play, violent rape of the citizen girl Pamphila.  (Sharon James and Robert Germany have both written about the originality to Terence of these elements.)  These profound divergences from the Greek source-texts dramatically emphasize the licentious brutality of the young citizen-men rapists, and play a fundamental role in Terence’s programmatic interrogation and critique of men’s privilege and power in the Roman citizen family and society (as Susan Lape, among others, examines).

The Roman tragedies of Seneca the Younger adapt Greek originals by Sophocles and Euripides, and a notable characteristic of Senecan tragedy is its increase in graphic violence across the board, as A. J. Boyle and others discuss.  Hercules Furens, for instance, replaces the messenger speech-style report of Hercules’ off-stage frenzied murder of his wife and children (from Euripides’ Heracles) with an onstage play-by-play report from his father, an eyewitness.  Here in my view the exaggeration of the violence against a woman (and children) in part reflects the violent coercion upon which the Roman state is predicated during the early Empire (especially under Nero), the increased vulnerability of Roman families under the Julio-Claudian regime, and the increased violence against women in Rome under the guise of acceptable court business.  That the strongest of heroes brutally slays his own family within earshot and almost within sight of the audience is an effective symbol of the imperial period’s inward-turning of state violence against its own.

Terence and Seneca fit the pattern of increased violence against women in adaptation, but I would not call their adaptations “sinister,” because the changes play important roles in the playwrights’ trenchant critiques of their societies.  The sinister adaptations for screen that I have examined, however, are motivated instead by sensationalism or narratological convenience, or both: it’s easier for Fifty Shades of Grey and The Hunger Games to silence the lead woman’s objections to the violent situation she faces, it’s more titillating to add gratuitous rapes and murders into Game of Thrones, and it’s both easier and more titillating to turn Artemisia into a sex-crazed, victimized villain and the sex in Fifty Shades of Grey into consensual BDSM.  Looking at Terentian and Senecan violence with the modern comparisons helps reveal the ancient dramatists’ underlying commentary, while in turn the ancient antecedents show us just how shallow the sinister adaptation in these modern productions are.  Granted, we could say that there are some dramatic effects within these cinematic works that the sinister adaptation achieves.  But is an increase in tension or pathos sufficient grounds either for ramping up the abuse and exploitation of women or for eliminating their voices and agency?

I owe especial thanks to Serena Witzke for her insights on this two-part column, and thanks as well to Patrick Dombrowski and Jim O’Hara.

07/23/2021
Blog: “Can We Strangle the Muse?”: Carson and Bruno’s The Trojan Women
By Christopher Trinacty, Emma Glen, and Emily Hudson (Oberlin College) Anne Carson’s celebrated adaptations and...
07/12/2021
Blog: Contingent Faculty Series: A Conversation with Daniel Libatique
Our fifth interview in the Contingent Faculty Series is a virtual conversation between Dr. Taylor Coughlan and Dr...
07/06/2021
Blog: Six months in(surrection)
Today marks half a year since insurrectionists stormed the U.S. Capitol, occupied the Senate chamber, violently...
06/28/2021
Dissertation Spotlight: The “Oracular Tale” and the Oracles of the Greeks
Joseph Fontenrose’s The Delphic Oracle (1978) fundamentally reshaped how we think about Greek oracular divination...
06/24/2021
Blog: Ancient Worlds, Modern Communities: Connecting to the Ancient Greeks through Medicine, Sociology, Literature and Philosophy
The Ancient Worlds, Modern Communities initiative (AnWoMoCo), launched by the SCS in 2019 as the Classics...
END_OF_DOCUMENT_TOKEN_TO_BE_REPLACED